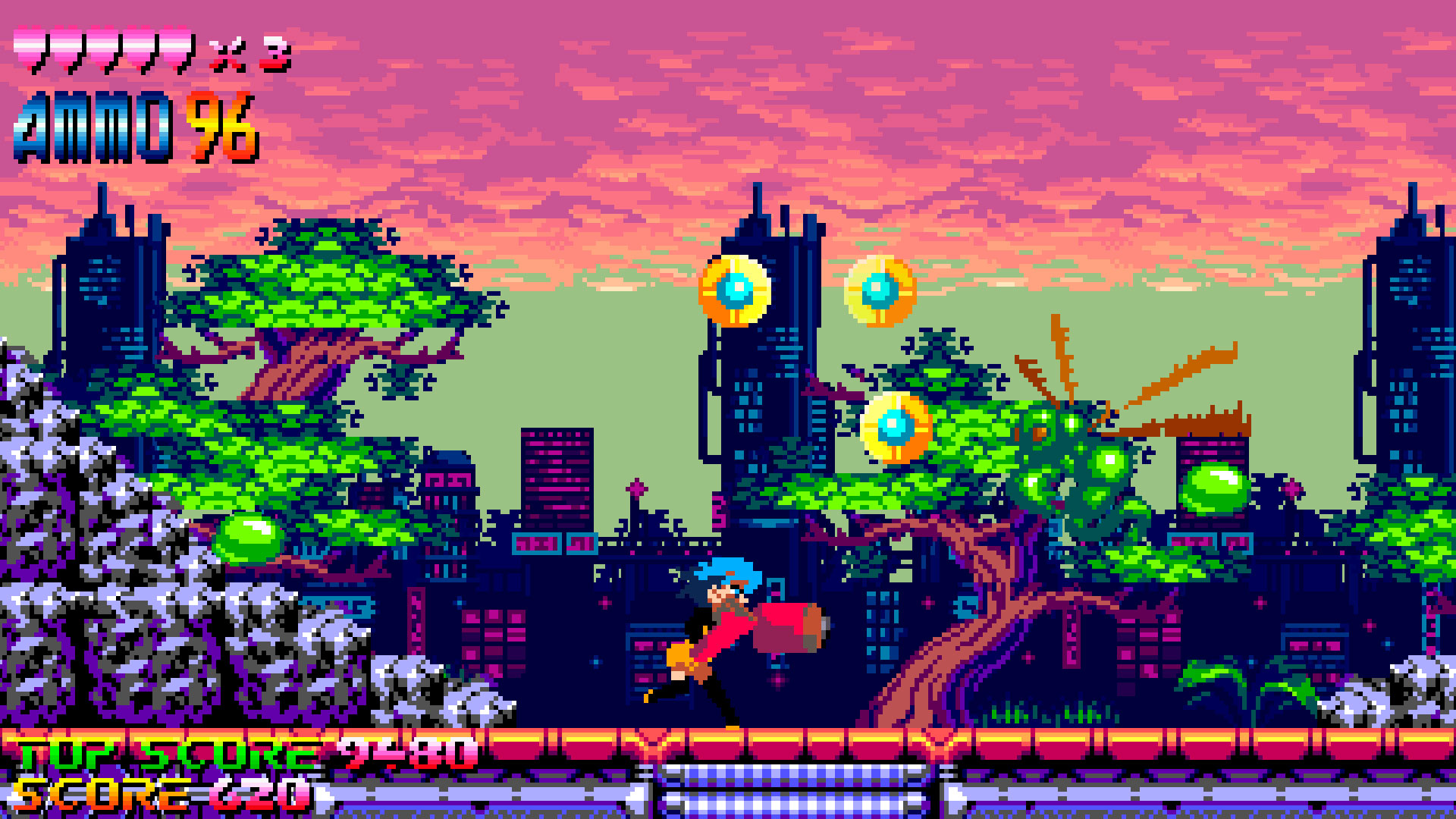 Gun Crazy, from developer Ritual Games, is described on the Nintendo E-shop as ‘a fast-paced and hectic arcade style action shoot ‘Em up’ and an ‘homage to classic old school classics!’ This rings true, with this game offering a nostalgic and hectic arcade shooter experience, taking obvious inspiration from games such as Mega Man and Metroid. Though there isn’t anything here that really makes Gun Crazy stand out from other games within its genre, it does what it needs to and does it well.

The game follows an unnamed cop, who takes on a slew of enemies and bosses throughout a futuristic landscape, armed only with a blaster and a bionic fist. This is all the game provided in terms of story, giving no context or background information at all, which lends to the classic arcade experience. You’re just a cop defeating bad guys. Sometimes simplicity is effective. 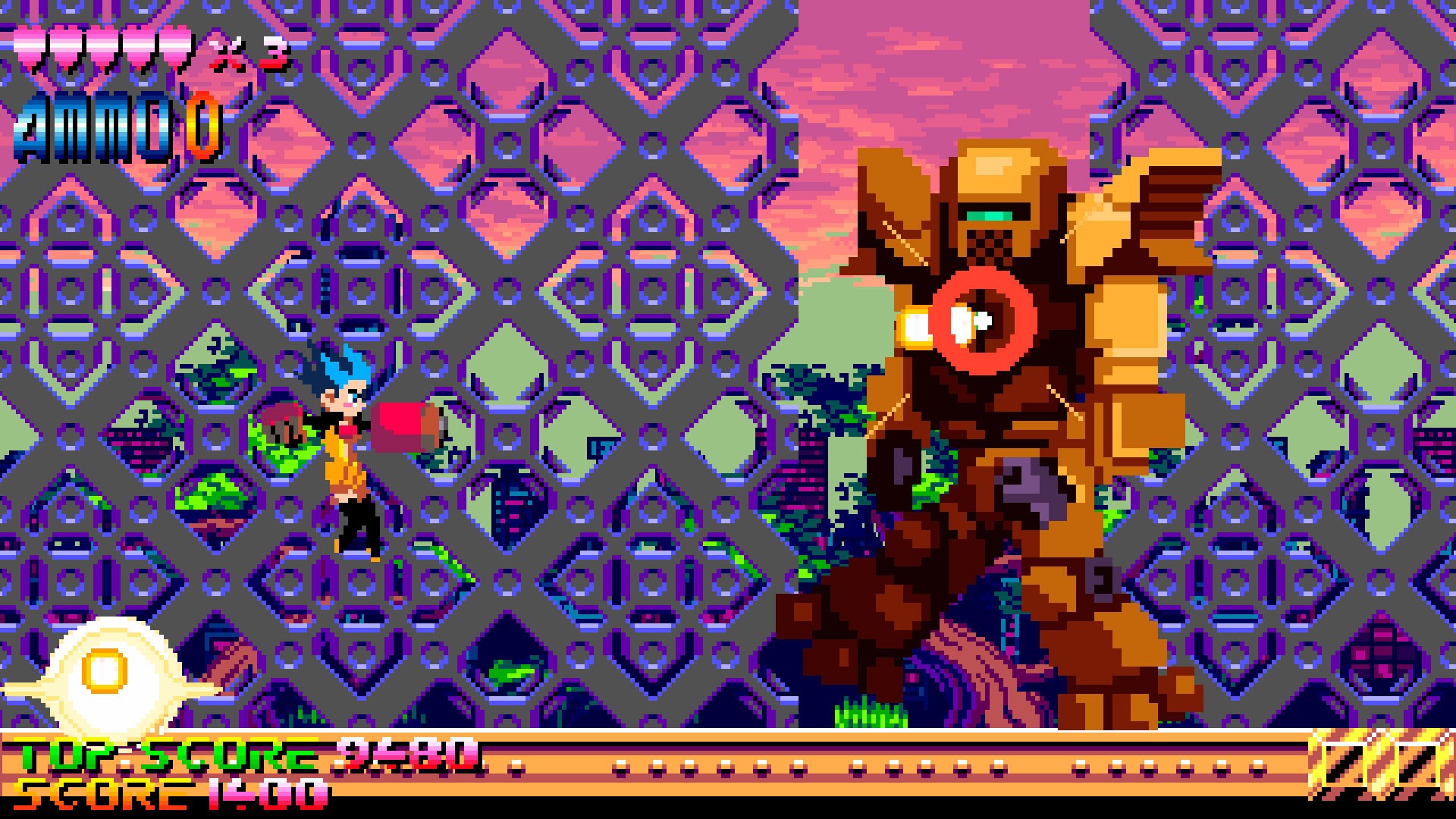 The game only has four levels, with each bringing something different to the table. The first level acts as a more stereotypical shooter level, having you run right to fight enemies, and is the only level to have three bosses spread throughout the zone instead of just one at the end. This acts as a tutorial stage, to allow players to get used to the basic controls. The other levels differ in style by being more restrictive, such as being confined to a single box where enemies spawn, or riding on top of a police car. The final stage reverts back to the format of the first, but without the smaller bosses. Even though there are only four stages, it will take you a while to see all of them, as the game can be quite difficult to begin with, though once you get the core mechanics of the game, it can become apparent how short the game is. Upon completion of the arcade gameplay mode, you unlock 1CC mode which acts as an insta-kill mode, giving you only one round of health, providing a difficult challenge to the player, however there isn’t much incentive to continue, as it is just running through the same four levels again.

The health system really lends itself to the arcade feel of the game, giving the player three credits which act as chances to continue. Each credit grants three rounds of five hearts, which due to the hectic nature of gameplay, you will need. Once you run out of the three credits, it’s game over and you have to start from the very beginning again. This is pretty well balanced, as you aren’t constantly taken back to the very start of the game, but also you don’t have so much health that you can be reckless, and this adds to the replayability of the game.

The controls are pretty standard, with a jump button (B), a fire button (Y), and a dash button (A). There is also the option to hold down the L button to stand in place, however, this really has no use in gameplay as standing still is just going to get you hit. One nice touch with the combat is that when firing the blaster and you are close to an enemy, a melee punch will automatically occur, which is very useful when you feel overwhelmed by the many enemies that all come for you at once. One thing that doesn’t work, is that when dropping through the floor to a lower level, there is no option to shoot directly down, so if there is an enemy where you will land, it will take health and there is very little you can do about it, which can be frustrating. Another frustration with the gameplay is that in the levels where you can move forwards, it is impossible to move back, which can frustrate if there is a power up just off screen. 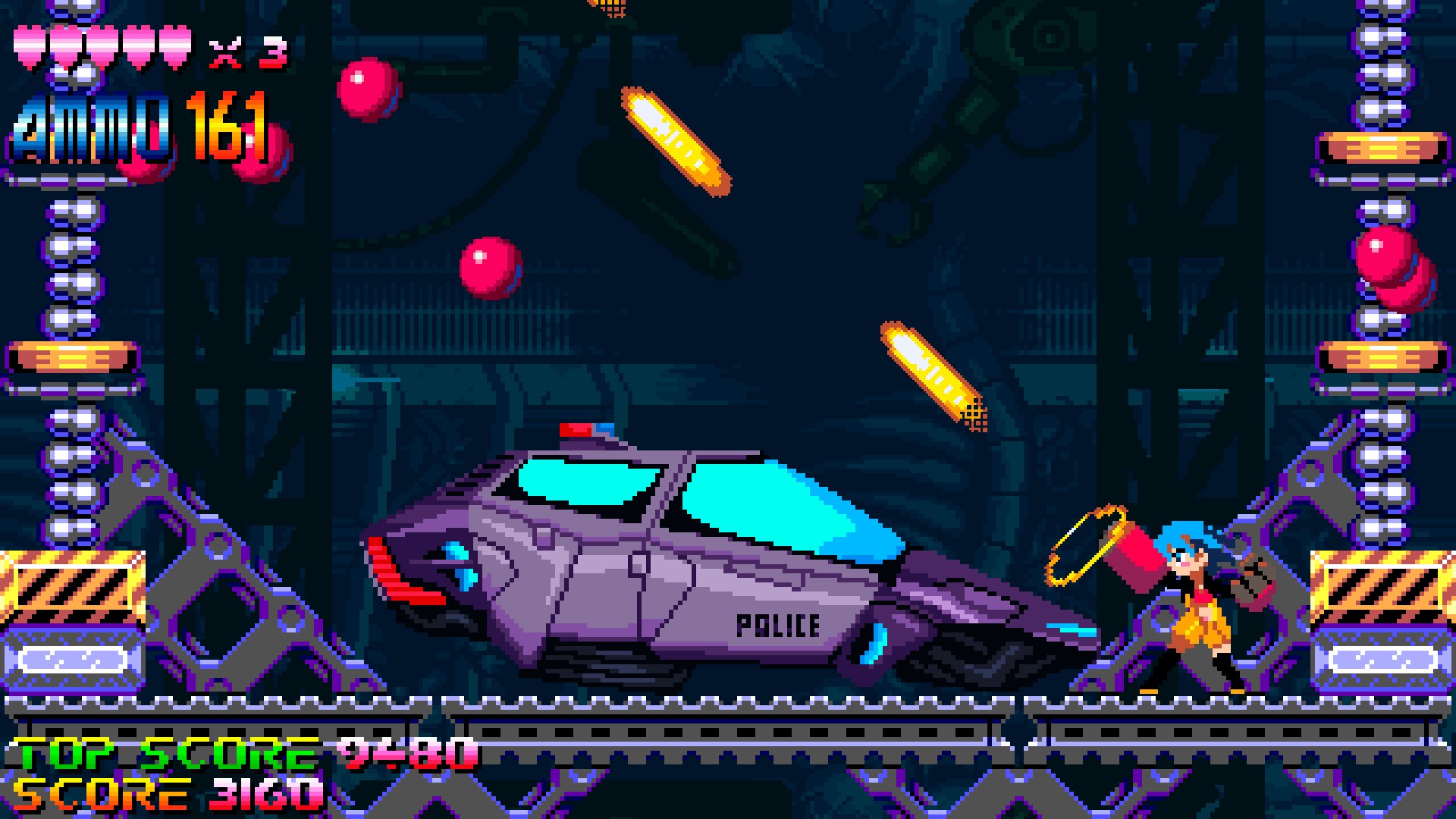 The graphics and sounds all work well in creating the retro style of the game, whilst still feeling modern, such as how the protagonist’s hair moves, instead of just being the same no matter what she is doing. It is unfortunate that sometime the colour palettes of some backgrounds clash with those of the player and the enemies, which can make it very hard to distinguish what is happening on the screen during the most hectic of moments, there were many times in the first level where I just didn’t see a projectile coming towards me because it blended in with everything else, though in the second and third levels, the colours popped out more against the darker backgrounds.

The sound is a mixed bag. The soundtrack for the game is simple and effective, not being too obnoxious or loud, that you can happily play and listen to the tracks without being distracted, with the music creating the correct atmosphere for a shooter, and the boss music adding the intensity you would expect. However, the SFX such as the sound the gun makes when blasting and the scream when you die, though sound as though they belong in an arcade game, just end up being distracting and annoying. Fortunately, there is the option to control the sound levels within the options menu.

Overall, Gun Crazy is a fun, fast-paced ode to classic arcade games, and whilst there are a few improvements that could be made, this game delivers upon the experience you would expect, offering a challenge with a hit of nostalgia. It is definitely worth checking out if you’re a fan of arcade shoot’ Em ups.

Gun Crazy, from developer Ritual Games, is described on the Nintendo E-shop as ‘a fast-paced and hectic arcade style action shoot em’ up’ and an ‘homage to classic old school classics!’ This rings true, with this game offering a nostalgic and hectic arcade shooter experience, taking obvious inspiration from games such as Mega Man and Metroid. Though there isn’t anything here that really makes Gun Crazy stand out from other games within its genre, it does what it needs to and does it well.