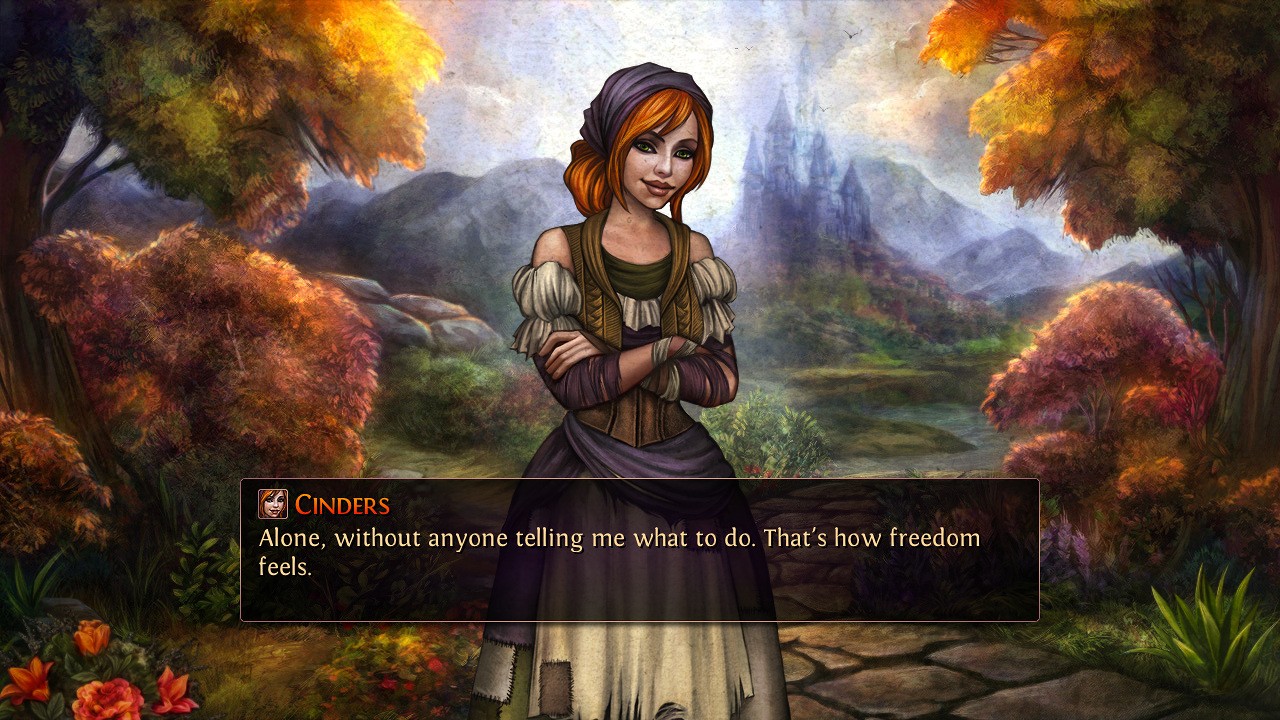 You may think you know your childhood fairy tale’s inside and out. If you have children, you’re probably bored stiff of repeatedly reading them, especially as most of them are “Disney’ed” up to keep the little ones happy. No Brothers Grimm dark tales in my household, unfortunately. When I was offered the opportunity to play Cinders, I was a little reserved with my response. In the back of my mind I was concerned that I would have to sit through another children’s story after I had put them to bed. Fortunately, I couldn’t have got it anymore wrong.

Developed by MoaCube and published by Crunching Koalas this visual novel (VN) does more than tell the classic tale of Cinderella. It explores the characters that make up its foundations. Finally, you get to understand what makes each of them tick, and why loathe poor old Ciders so much.

If you’ve never played a VN before, let me give you a brief explanation of how they work. Like a book the story plays out in front of you, you read the dialogue, and the plot, but unlike a book all the descriptive elements are shown through the imagery and the audio. At poignant moments in the tale you will be asked to make key decisions. This will drive the story down one route or another, giving you full control of how it plays out. This variety in choices allow you to have different experiences and outcomes to the same story.

So, now you understand the basics of the genre, let’s have a look at how Cinders plays out. First, I will not delve into the story, as I don’t want to spoil it for you. It follows the fairy tale that we all know and love, with an awful lot of filling between the key moments that you experience in the book. Unlike the story where Cinderella is a meek and kind-hearted individual, in this game she still has the latter trait, but she is also sassy, fiery, and you get to see her personality from a whole new perspective. It was refreshing, and genuinely made me laugh at several points. 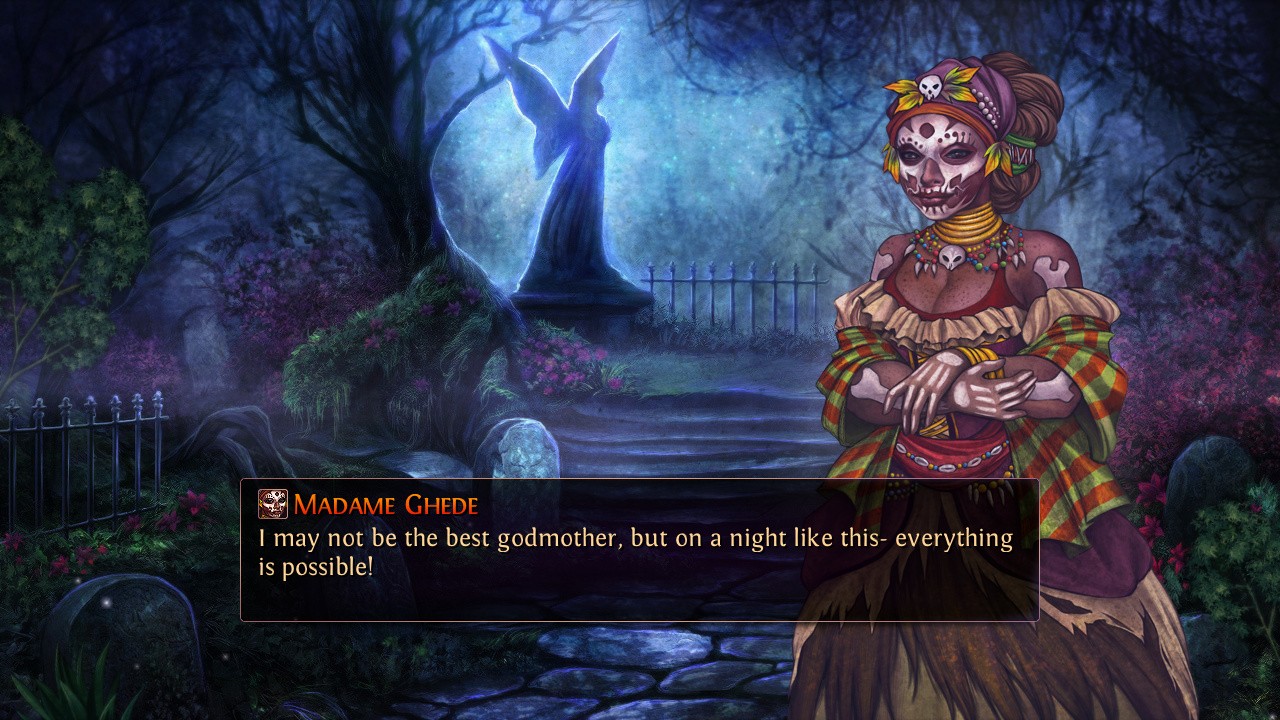 The tale revolves around the key players; Cinderella, Lady Carmosa (the wicked stepmother), Sophia and Gloria (the wicked step sisters), Prince Basile (The dishy and handsome Prince), Madame Ghede (Her Fairy Godmother), “A Shady Character” (He’s, well, a shady character), and finally Perrault (The honourable Captain of the Guard). Unlike the kids tale that simply skips past the finer details, you get to see their flaws, and how your decisions affect their lives. It was nice to put Cinderella in the driving seat and finally have her as the person in control.

This tale starts around 7 days before the famous Masquerade ball that we’ve all read about. During the run up to this famous event, you must live the life of a servant. You answer to your stepmother, and do her bidding, or not, the choice is yours. Whatever decision you make, you must live with the consequences. Each will set you on a path that can’t be altered. It was probably the most interesting visual novel I’ve experienced to date, because it put such a twist on a tale I know inside and out. Think of the film Snow White and the Huntsman, and how this brilliantly filled the blanks of that much loved tale. This is what Cinders does, but in a VN setting.

On my first playthrough I lost hours of my day without realising. The story played out at such a rate that I was sucked in immediately. The tale is well written, and each of the areas you visit help to progress the action. Everything has a purpose, and there was very little done just to act as a filler. The text has been translated from another language, so I discovered a few errors. These were minimal and didn’t impact on the immersive nature of this title.

If you are familiar with visual novels, you will know what to expect from a graphical aspect. Minimal animation, character models that fade in and out of shot to represent them moving towards or away from a situation, and beautifully designed landscapes. Each of the areas you visit looks unique, colourful, and the tones they use matches the setting. The character models belong in a fairy tale and were well designed. The text used a white bubble font. It reminded me of several Mega Drive games that I have played. It was easy on the eyes and suited the theme. Not only did the story make me laugh with its witty style, the animation used to show them talking was unintentionally hilarious. They all appeared like they were fish gasping for air. It didn’t need the animation, and still images would have worked better. 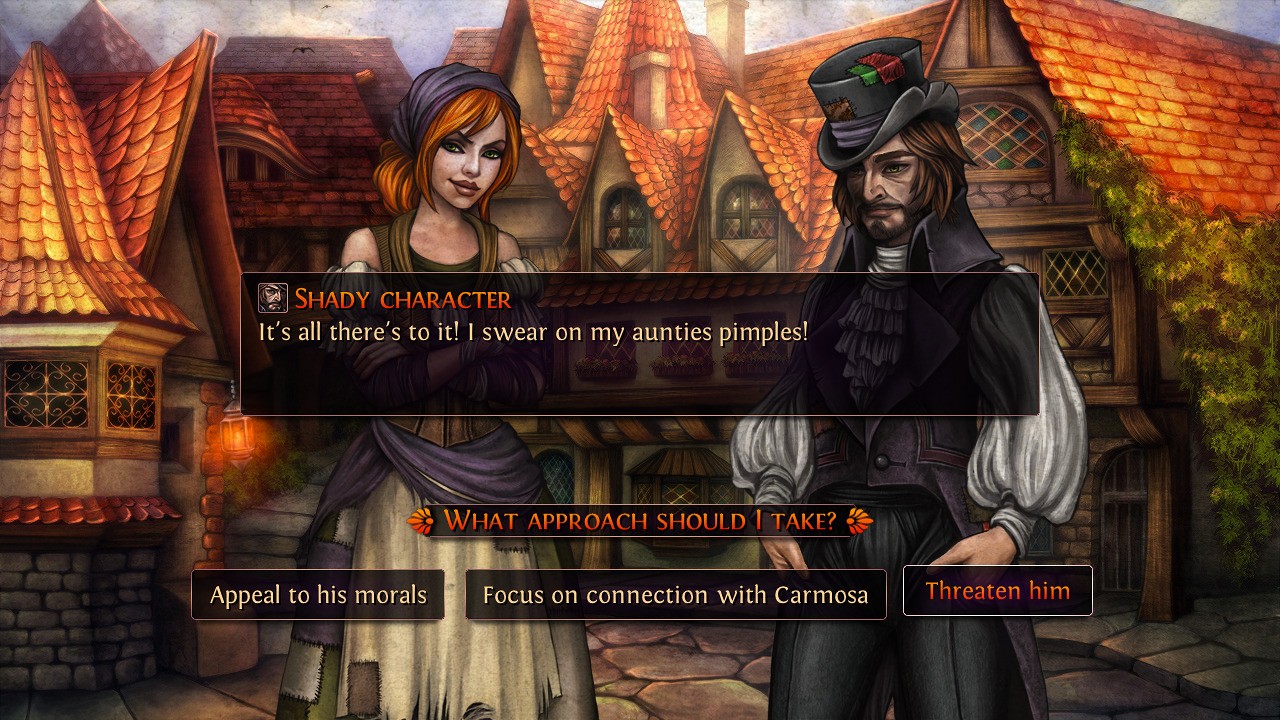 The audio surprised me. It was neither good nor bad. It sets a medieval regal feel to the game, but didn’t support the action to emphasise any of the emotional elements that were playing out. When I play a VN, I want a musical score that sets the scene, and drags you along with the text. This didn’t happen for me in this title. Maybe I expected too much. Like I’ve said, it isn’t bad, it just didn’t strike a chord with me.

When it comes to controls, there is very little to talk about. Of all the genres to play, this has the least controller use. You’ll sit there with a cup of tea (other drinks are available) and a snack, occasionally tapping the A button to progress the text. So it’s a case of sit back, relax and watch the story roll by.

Veterans of this style of game will know that you can skip your way through all the text and get to each major part of the plot. This is great if you don’t fancy re-reading everything up to a certain point. I wouldn’t suggest that you use this until you’ve finished one playthrough, otherwise you’ll miss out on all the finer bits of the tale. It took me around 4 to 5 hours of reasonable paced reading to get through this one, so I’d suggest leaving at least that amount of time to finish it comfortably. If you are after achievements, you’ll be required to complete all the different outcomes. This is where the fast forward option comes in very handy. The multiple outcomes, increase the replay value and make this great value for money.

If you love reading, or enjoy a twist on a known tale, then this will be the game for you. If you’ve never tried a VN, you’ll be in for a pleasant surprise by giving this one a go. It’s a fun, whimsical and enjoyable take on a family classic. Be the Cinders that we all know, or explore several other options. The choice of how you want this to play out falls on your shoulders, so pick wisely, and see how your story unfolds. Would I recommend this? Absolutely, I’m glad that I put aside my original concerns and tried it. For me, it’s one of the best visual novels I’ve experienced. All you have to remember is that not all fairy tales have a happily ever after.

A mature take on a classic Fairy Tale. This Visual Novel will allow you to understand what makes up each character, and why they loathe Cinders so much.