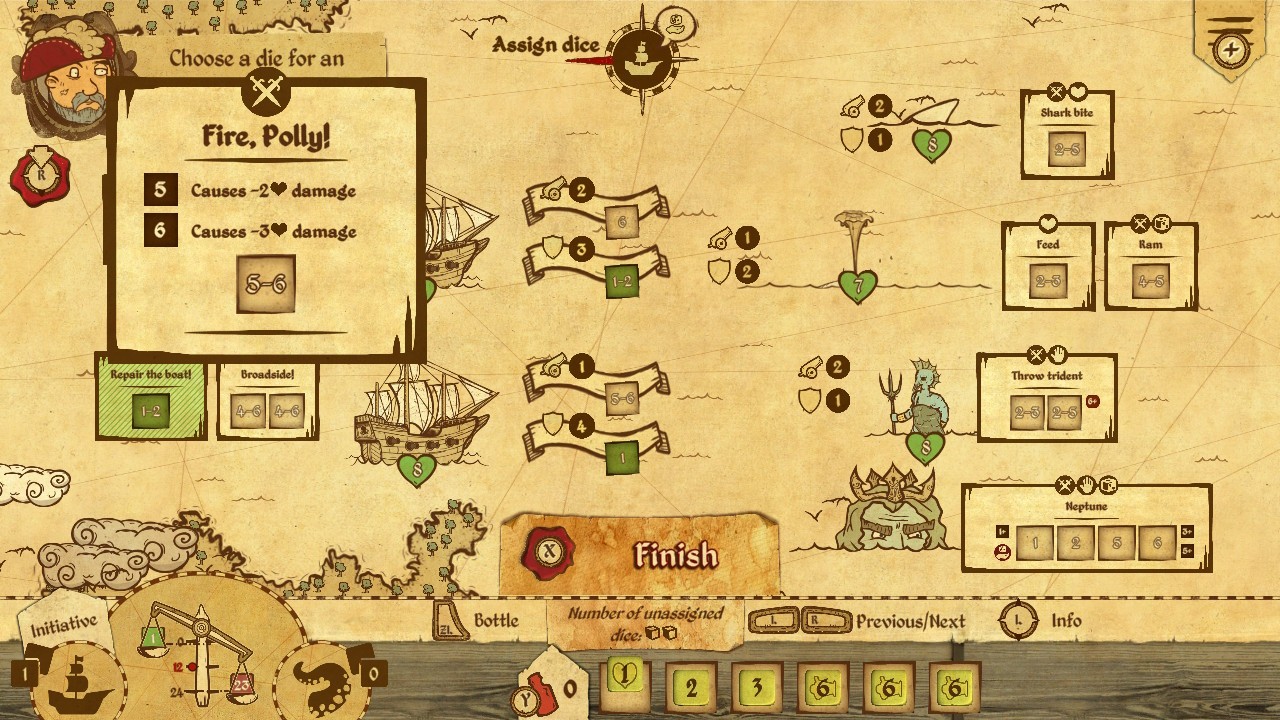 Avast ye fellow gamers! Here be dragons is the first title from Red Zero Games, a studio made up of gaming enthusiasts, both board and video. This first outing combines the press your luck dice rolling, with turn-based naval combat. But the biggest question is, will this game be walking the plank into the mouth of a Kraken?

The story behind the game, set in the age of exploration, is that Columbus’ voyage to America in 1492 was the end product of a wider, and as yet unheard of, mission to rid the Atlantic of its various monsters and creatures. The sheer idea that someone could sail across in a small number of ships and with a relatively small crew being ludicrous. The setting of our story takes place across the area between Western Europe and the Americas as you hunt down and eliminate the threats the seas posses.

There is a LOT going on in this game. The gameplay focuses on the combat segments, with the story elements used to break up the combat, so if you are looking for some socially interactive game or more RPG elements you won’t find them here. When I first looked at the combat, I thought “oh it has elements of Magic: The gathering” as both your units and the enemies have an attack and defence stat. However, this is where the similarities fade as when dealing damage, the unit will deal its attack value MINUS the defence stat, so if attacking with a value of 3 against a defence of 2, then only 1 point of damage will reach the unit’s HP. Simple, right?

Now here is where combat gets more complicated. To spice things up, and to make the game a more skilful challenge, there are several elements added to the game to both randomise and strategise the combat further. First, at the beginning of each turn a set of dice is rolled. These dice form a pool from which you, and your enemy units, can take from. It will strengthen your attacks, or unlock actions you can use each turn. Attacks can have additional effects, such as poison draining your HP each turn, and the fact that dice are both restricted in number and limited in usage mean you have to really think about which dice you are going to make available to your enemy, while also ensuring you have unlocked your unit’s actions. But wait, there’s more me hearties! 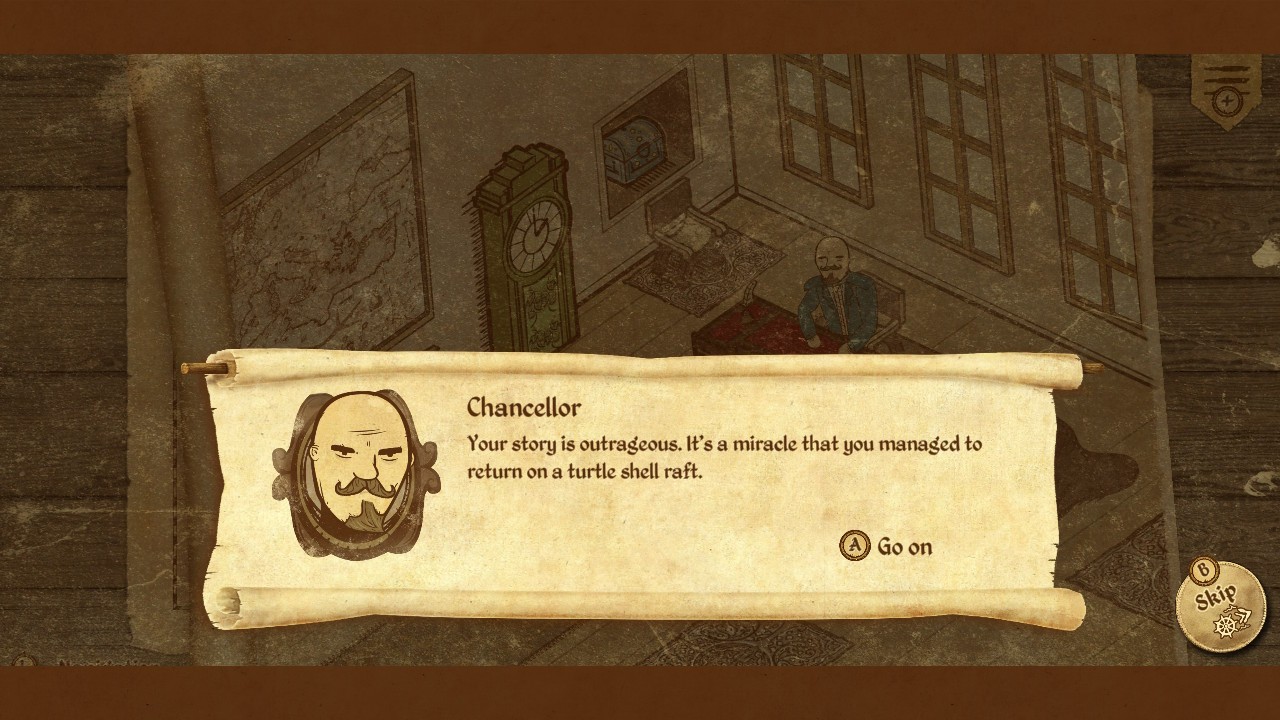 Each round has an initiative system to determine who goes first. At the start, your units have a greater initiative than the enemy, but by using dice you lower your team’s initiative, the greater the value, the greater the loss. If initiative changes during the course of a battle, then your enemies get to dictate the attacks, dice and actions they use before you. But all is not lost shipmates! There is one final twist to this tall tale.

During the course of battling you will see bottles floating in the sea, be sure to pick them up as they contain ink! This can be used to alter and re-roll dice values in your favour. You can also make improvements and upgrades as you progress through the combat in each stage.

The gameplay is fun, eventually. The tutorial you are provided with shows you different aspects of the combat system as you progress, making the start of the game feel like a chore at times, and definitely creating an obstacle that gamers really need to push through in order to enjoy the game, but for those who make that effort the rewards are there and this is certainly a game I encourage players to batten down the hatches and ride the storm.

While players will enjoy the combat, there is also a risk of losing interest, particularly if losing a battle. There’s little to no consequence to the combat system. If for example you lose a ship, but win the battle overall, you start again with a full ship as if nothing had happened, likewise if you lose the battle entirely all that happens is that you start again. This is great for newer players as that lack of consequence will encourage you to keep trying, keep grinding and get better at the mechanics, but later in the game it became hard to want to try again, and the problem I (and I’mm sure many gamers have) is once I walk away, it’s often a long time before I feel like picking up that title again, even if it was great up until that point. 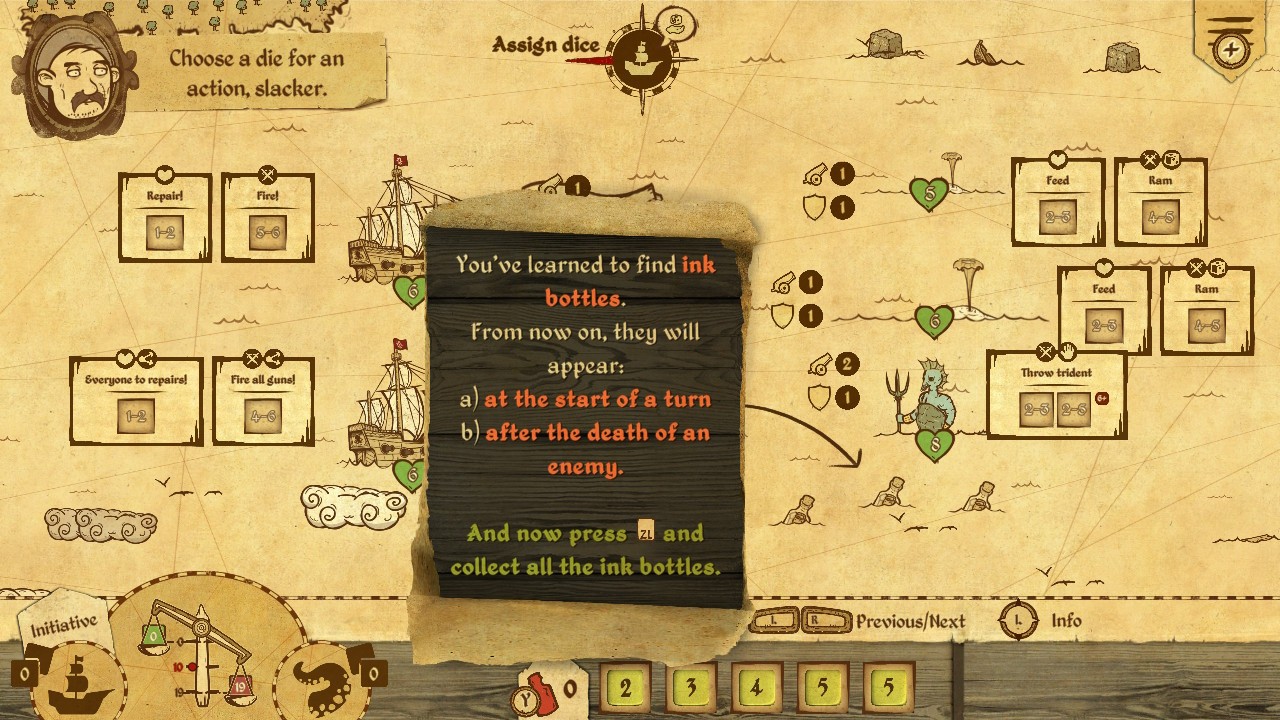 The art of the game is a huge selling point. The entire game is decked out in a sepia “treasure map” style whereby the animations applied to it gives it a living map appeal. The ships are incredibly detailed for their size, and the wide variety and styles of enemies really add to the aesthetic provided. Combine with this a colourful and eclectic range of characters and you really feel immersed in a comic adventure, until the modern day references remind you of where you are, but in the absolute best way. The art style encompasses the best of video and boardgaming combined by using fantastic 2D artwork along with animations that feel fluid and in fitting with the art style, ships bob on the waves, they ebb and flow with the surrounding water, dice are blown across the screen by cherubs and the whole thing is both charming and amusing to watch.

The audio is also well thought out, the music used in the background is in fitting with the time period and its associated settings and the sound effects work well to emphasise this during the combat sections. There isn’t huge amounts of dialogue, but again it fits in well with the game, the humour is well written and often causes a chuckle. Even when a joke doesn’t quite hit home, I wasn’t removed from the experience and it is clear that the team behind this are people who love games and popular culture. They want you to laugh while playing and they want you to enjoy the world they have built.

The game runs well in both docked and handheld mode, and can also play in tabletop mode. Though my biggest complaint is the lack of being able to play this with friends. With no local multiplayer, Here Be Dragons loses out on what could have been a huge potential market. I constantly felt “this would be great to practice tactics with” or “this would be fun to play with my board game friends” and simply not having that ability soured the experience a little. Hopefully the game will pick up enough traction to incorporate both a multiplayer mode and possible DLC, map packs and enemy packs are a blatant future avenue for these guys to explore and I really hope they do!

Overall, this is definitely a game to pick up. Yes, it has flaws and issues on the Nintendo Switch that they need to address, but there are more “popular” triple A titles that have bigger issues that do well. Here Be Dragons is a very fun experience that requires a little buy in from the player to learn the world around them. But the reward for that is a satirical romp through the age of exploration. Add a local multiplayer and this had the potential to challenge other digital board game titles. Hopefully there will be more to come from Red Zero Games, because they have certainly found a treasure chest here.

Here Be Dragons is a must have for fans of press your like dice games, and tabletop board game fans. It is not without its faults, but those willing to show a little grit and perseverance will be rewarded with a fun and satirical monster hunt across the ocean waves. Tie down the mizzen mast and hoist the mainsail, I’m off to fight another Kraken!