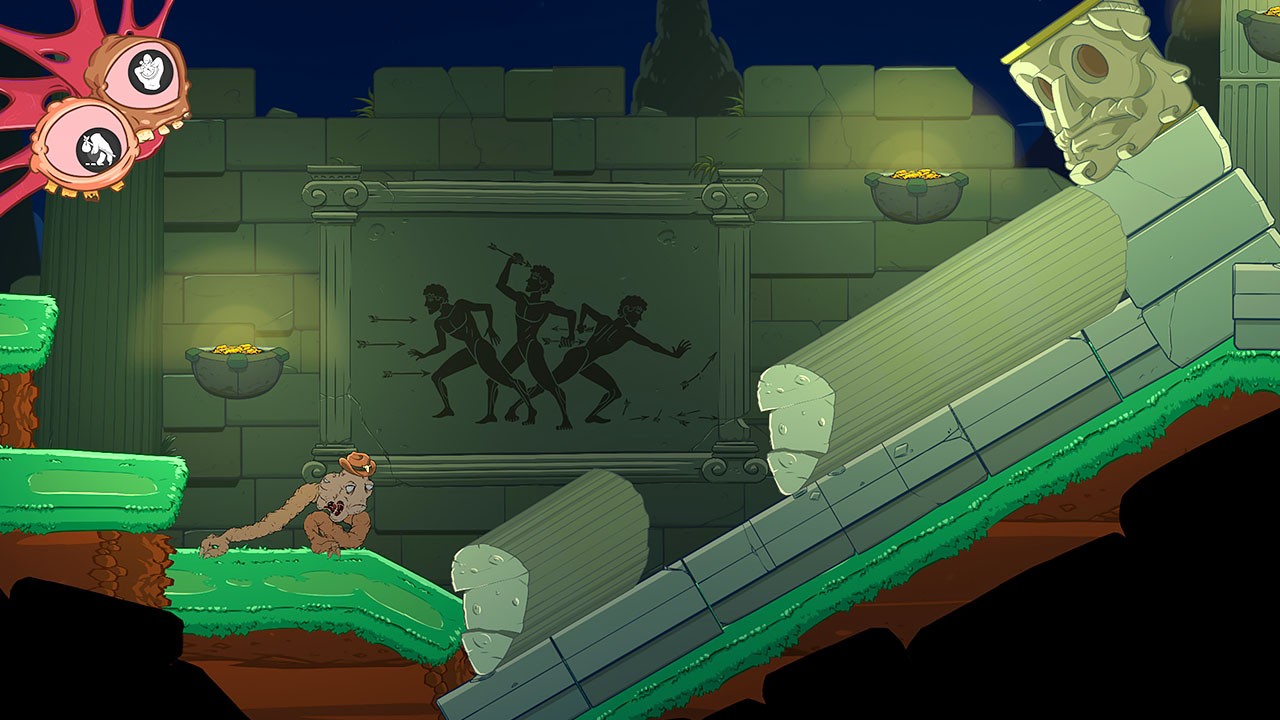 I have a very niche sense of humour. I think that is important to recognise when approaching a title like Struggling. This game, Chasing Rats Game’s first, is a strange experience based on physics and a strangely gruesome adaptation of classic mythology. Struggling takes an odd concept and twists it with an absurdist reality. While watching reactions of its announcement on Switch, it seems that many people may be put off by its grotesque imagery imagery and focus. But Struggling scratches a comedic itch that can be fun for the whole family. Or just 1-2 people with an audience.

With an unusually detailed intro for an independent game of this type, Struggling explains the lore of its world. The world was defended by mutant heroes, with disfigurements that made them strong against the arbiters of chaos in the former world. These champions built a world called the ‘golden age’ of humanity. Greed and envy led to a false prophet rising to power, causing many to shun their former heroes into exile. As these heroes disappeared, the exiles told of the coming of two sibling champions: Hector and Achilles, who would bring knowledge to the masses. Despite this, the heroes never came. You as the player are Troy, a two-armed mutant abomination of the two heroes born centuries later. The narrative voice and tutorial, mock your existence as you learn the controls and struggle across the levels in Struggling. An apt title for a game that is literally the most frustrating title I have ever experienced. The player’s frustration is almost characterised by Troy’s pathetic yet useful arms. Your mission is to get through the weird area, using Troy’s arms to drag yourself slowly across increasingly hazardous terrain. And also collect hats. Easily the best part of the game. Hats. 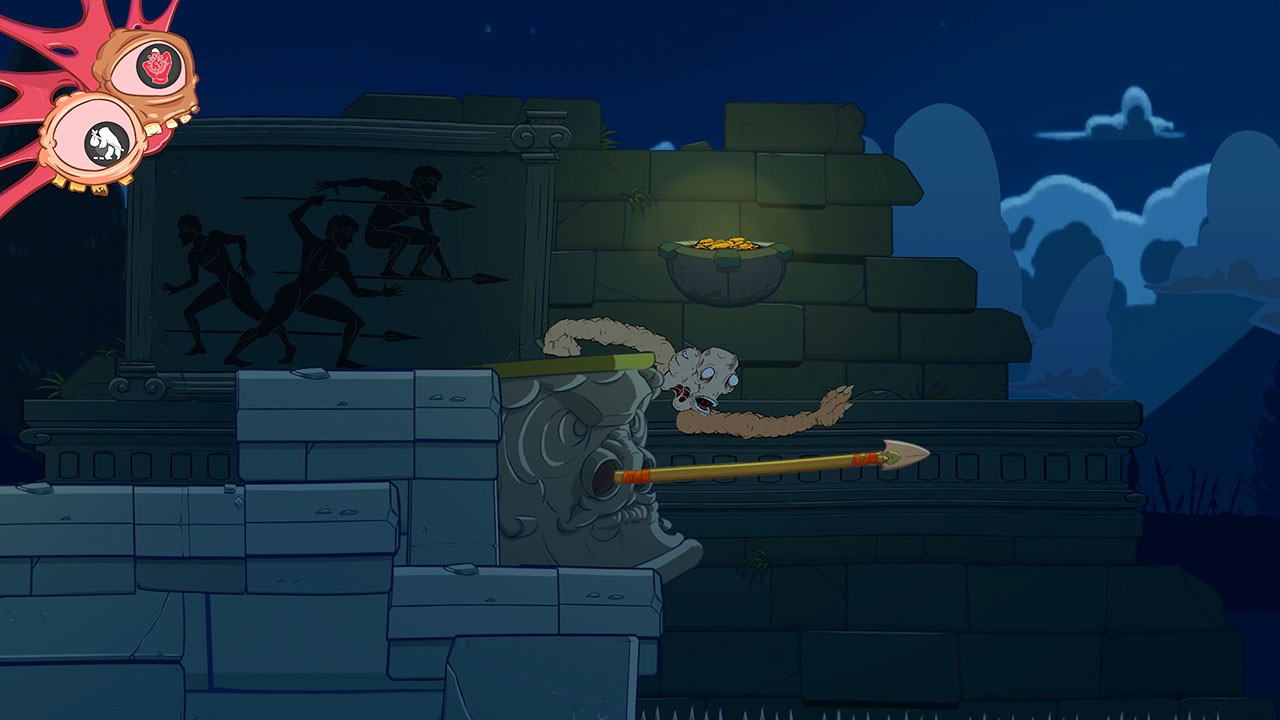 Struggling moves nicely through areas of different levels of challenges, presenting upgrades as rewards for defeating abomination gods, including detachable arms and other mutations which play to your advantage. The real enemy, however, in Troy is the gameplay itself. Physics and gravity do not always work the way you think they might. I cannot count the amount of times that I missed a platform with one of Troy’s stupid hands by fractions of a centimetre and saw myself plummet into insta-death acid. Without your arms (or in fact, if your arms are damaged) you are seconds from death at any time. This sometimes feels unfair. While this proved interesting, it definitely fit thematically into the game. Playing this game Co-op was a whole other beast. Trying to communicate to a friend or family member the exact place you are trying to collaboratively reach can lead to frustration if not an argument. I preferred playing this game solo, although the real fun could come by playing this game in a social setting and seeing who could last the longest in Co-op.

I really need to applaud the artists who hand drew Struggling. Grotesque and grim at every step, the talent and time that it took to create each individual environment and mutant creature you encounter is evident in every frame. Troy’s design encapsulates perfectly the type of game that Struggling sets out to be. This isn’t your colourful simulation game or a fast-paced action adventure. This is Struggling and struggle you will across hours of playtime. Possibly my favourite part of my time with this title was with what I will refer to as the first ‘boss’ AMADEUS. The design here was fantastic, reminiscent of a type of Pokemon pinball-esque experience, but with the severed head of Troy. Using your arms in a different way entirely to previous parts of the game, you have to alternate your way around Amadeus: The Firstborn, the horrendous monstrosity who sings opera along to a slapstick theme. Accompanied with the squishes and squelches of the sound effect catalogue of Struggling, Chasing Rats Games have created an entirely unique visual and auditory combination that I’m unsure could be copied or replicated in any other way. The hilarity of the contrast in music and art was a joy to play. While I found this boss as the first unusually difficult as the game gives little instruction on how to proceed, it was an entirely enjoyable experience. While the artwork may be initially off-putting to some players, it’s contribution to the comedy of Struggling is immeasurable and I would not change it. The entire soundtrack is weird and wonderful, matching to every scene so well. While it can feel like there is a LOT going on with all of Troy’s groans (can be turned off, thankfully) and the music and bodily functions sound effects, I think this adds to the overall charm more than it hinders the play-experience. 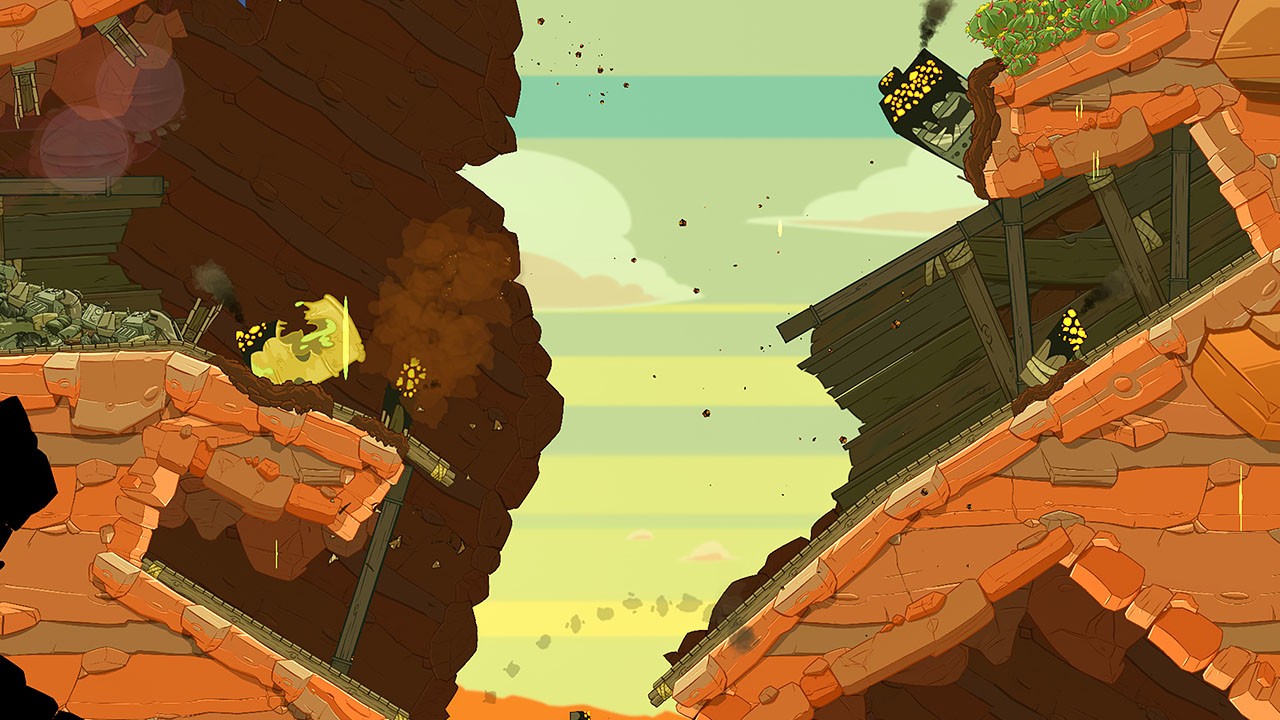 The progression of this game and its character-upgrades lets players learn and develop at their own pace. With the option between single player and Co-op mode, it lends itself to both a solo and party-experience audience. I might have found a new drinking game that tops Mario-Kart and to say that is to give Struggling a lot of credit. When talking about the game with others, they have found the initial idea and art-style repelling but when seeing it in action, they have warmed towards it. While I was not put off by the gruesome choice of design, I was definitely warmed to the game by its refusal to take itself too seriously. The sarcastic commentary of the omniscient tutorial-like voice breaking the fourth wall, the ability to collect hats for Troy’s two heads and the absurdist comedy which breaks down any preconceived expectations I had about the game’s genre. With so many independent games lacking a multiplayer mode, Struggling really pushes the boat out into further weirdness.

I don’t feel like the game has MASSIVE amounts of replay value outside of maybe speed-runs (although HOW anyone could speed-run this game is beyond me) and it’s pre-existing Co-op mode. I probably wouldn’t revisit the game on my own unless it was to play with a friend, but for the price, it’s well worth the play time and nightmare-fuel fun that a player could squeeze from it. Reminiscent of the QWOP type games, this game reminded me of Heave-Ho a lot. While I think Struggling is better for its lore, world-building and design, it seems to have a lot of similarities in its play-style to Heave-Ho and could definitely be worth a play if you enjoyed that game. Nevertheless, Struggling is a not-so-neat little game with hours of fun packed into it. I think it’s easy to pick games with our eyes and Struggling is a game you have to play to love. And even then, it’s still pretty gross. (In the best way.)

If gross-out humour and unusually deep lore is your thing, Struggling may be your cup of tea. A wonderful experience from start to end.