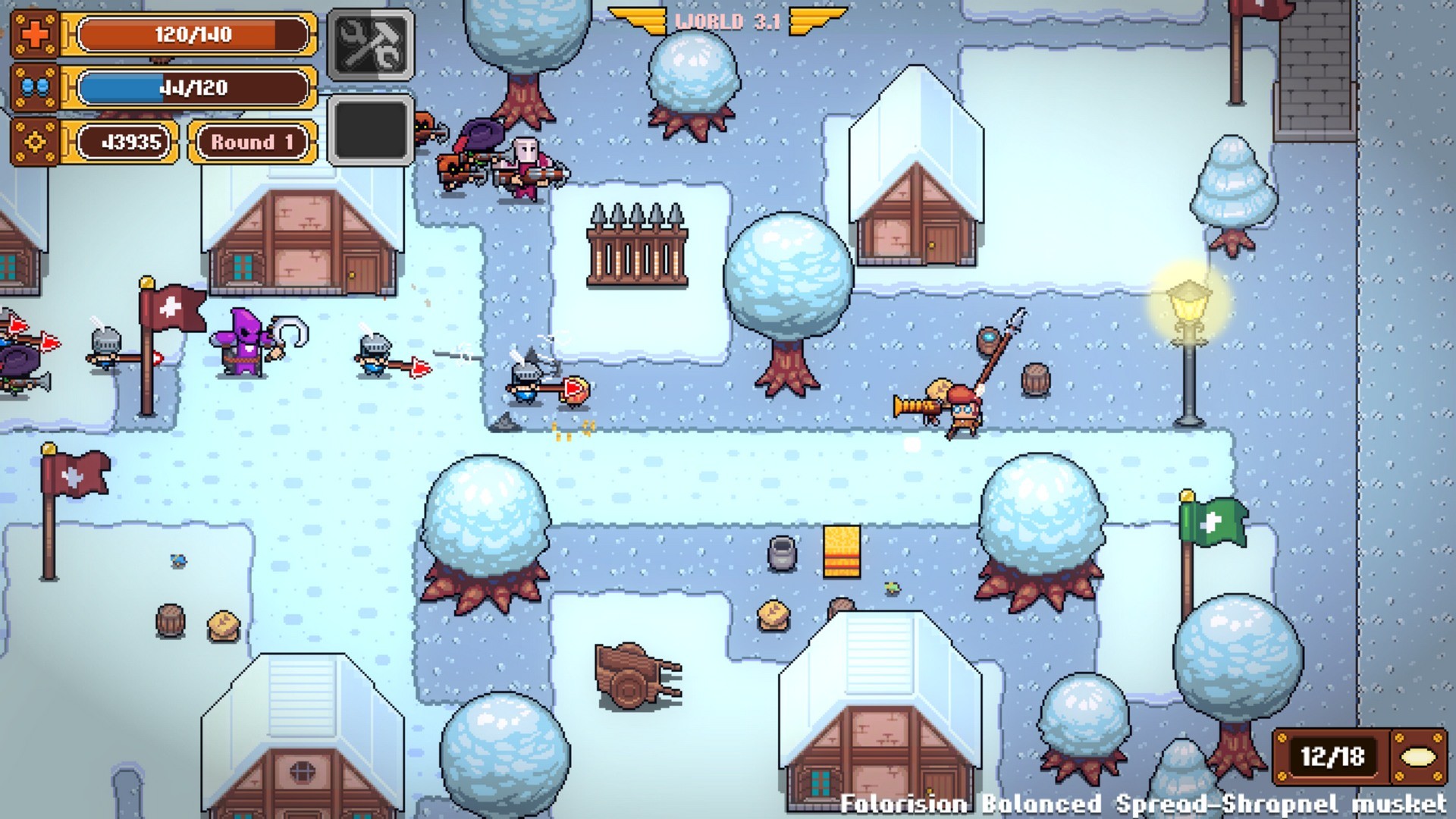 Roguelikes and bullet hells often go hand in hand; we need not look further than two of the most popular games in the genre, Enter The Gungeon and The Binding of Isaac. Woodpunk combines both of these genres and adds its own spin to the formula to create something unique, albeit flawed.

Woodpunk’s story revolves around the inventor Aquina and his battle against the powerful Medici family. The details of the plot are shown through cutscenes after each area, though these reveal little as it was to be expected; after all, roguelikes are not particularly well known for their stories.

The game’s graphics are pretty nice, with a surprisingly detailed pixel art style all across the board. Most enemies have simple, but recognizable designs, which help to identify them at a glance in the middle of a horde. Environments also stand out from each other thanks to the use of different palettes and details, though most of the buildings remain the same through all of them. The unique designs come from bosses, which cover big chunks of the map and look completely different from one another.

Sound is another highlight in Woodpunk; it has a pretty varied OST and sound effects. The music is vibrant with a medieval feel which grounds the world of the game somewhat. SFX are varied and well made, though some more would be welcome for certain enemy attacks. Something worth mentioning is how the game’s default volume is absurdly high, though it’s easily solvable thanks to the volume sliders. 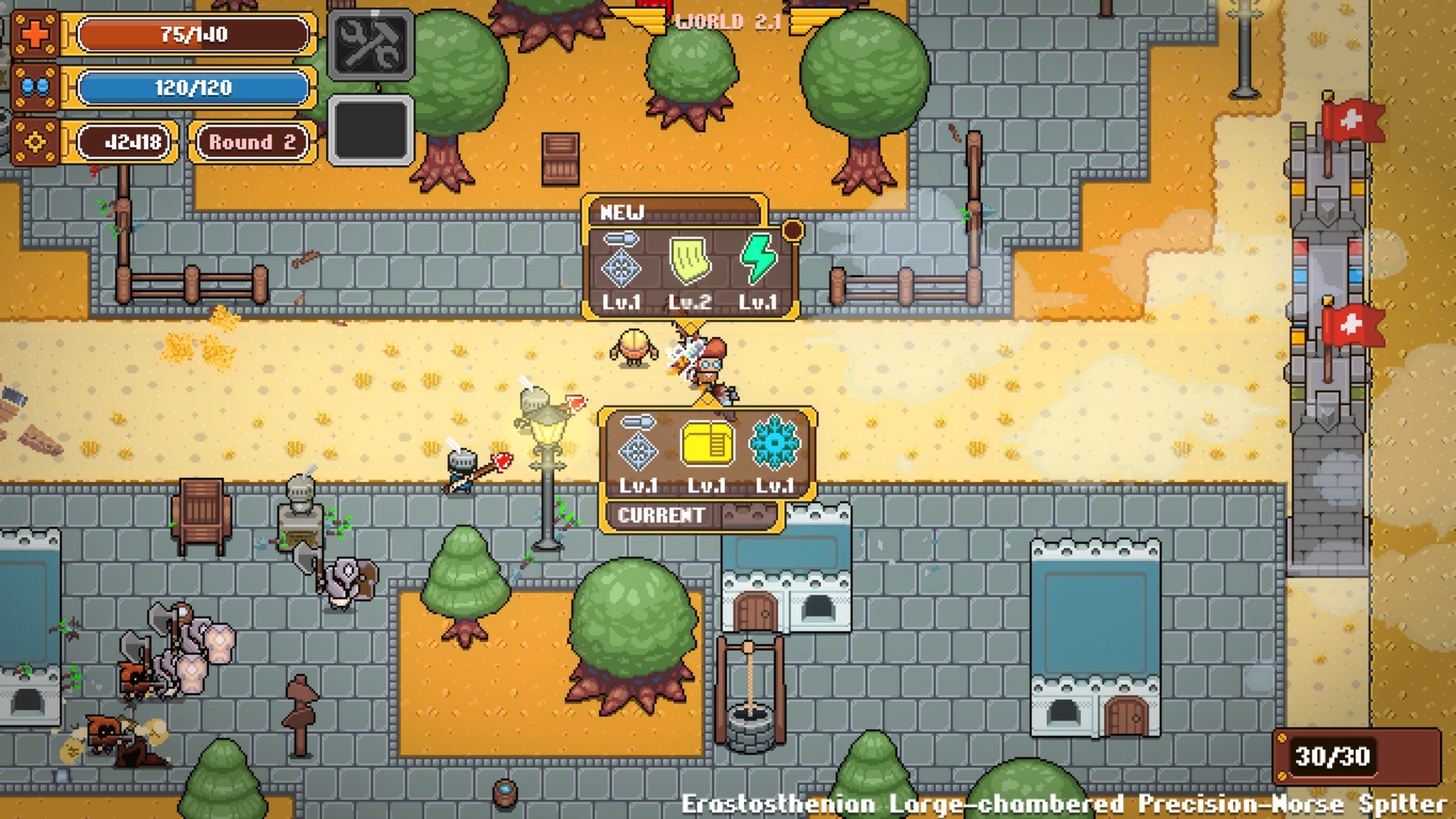 Woodpunk’s gameplay is simple enough; the player, as Aquina, is dumped into a map to fend off hordes of enemies. This is done through rounds, where more and more enemies appear or during which an objective has to be met. These objectives are usually defending a point or destroying enemy turrets, which after a while becomes repetitive, one of the larger issues with Woodpunk. The little objective variation and areas resetting after death force players to plod through the same missions all over again.

Death is very common as well, enemies deal a huge amount of damage and tons of visual noise to deal with during the game. The destructible buildings and objects often cover enemies from the player’s sight, while still allowing them to attack. Adding to this, the mountains of enemies that chase the players at once make the attack warnings blend together, preventing players from effectively seeing them.

It would be easier to deal with these issues if the dash ability were better handled instead of requiring energy to use. Every time the player uses Aquina’s jetpack to dash away it has to recharge, with the length of the dash directly related to the amount of charge. This jetpack can also go over low walls, but still gets stuck with anything else. The sheer amount of objects in the way often makes this ability useless, since it locks the player into it when used. It is very common to run into a dead end where something has to be destroyed in order to move; all the while enemies keep attacking a player turned into a sitting duck.

As enemies are defeated, they drop scrap, used to unlock upgrades in the tech tree and to load Teo’s crafting ability. Whenever this ability is used, a new random weapon will appear; these weapons draw from a pool of components, which vary their projectile, magazine and rate of fire. While it makes weapons different from each other, some can become quite useless. More often than not the player will be stuck with a small magazine low damage weapon, which can even make the turret destruction objective several times harder.

The weapon system is also made worse because durability is a mechanic, weapons breaking once it runs out. This means a good weapon might be lost after a single weapon unless luck shines and repair packs drop everywhere. To add insult enough, Teo seems to rarely drop melee weapons, effectively leaving players without a way to break bullets once their first breaks. 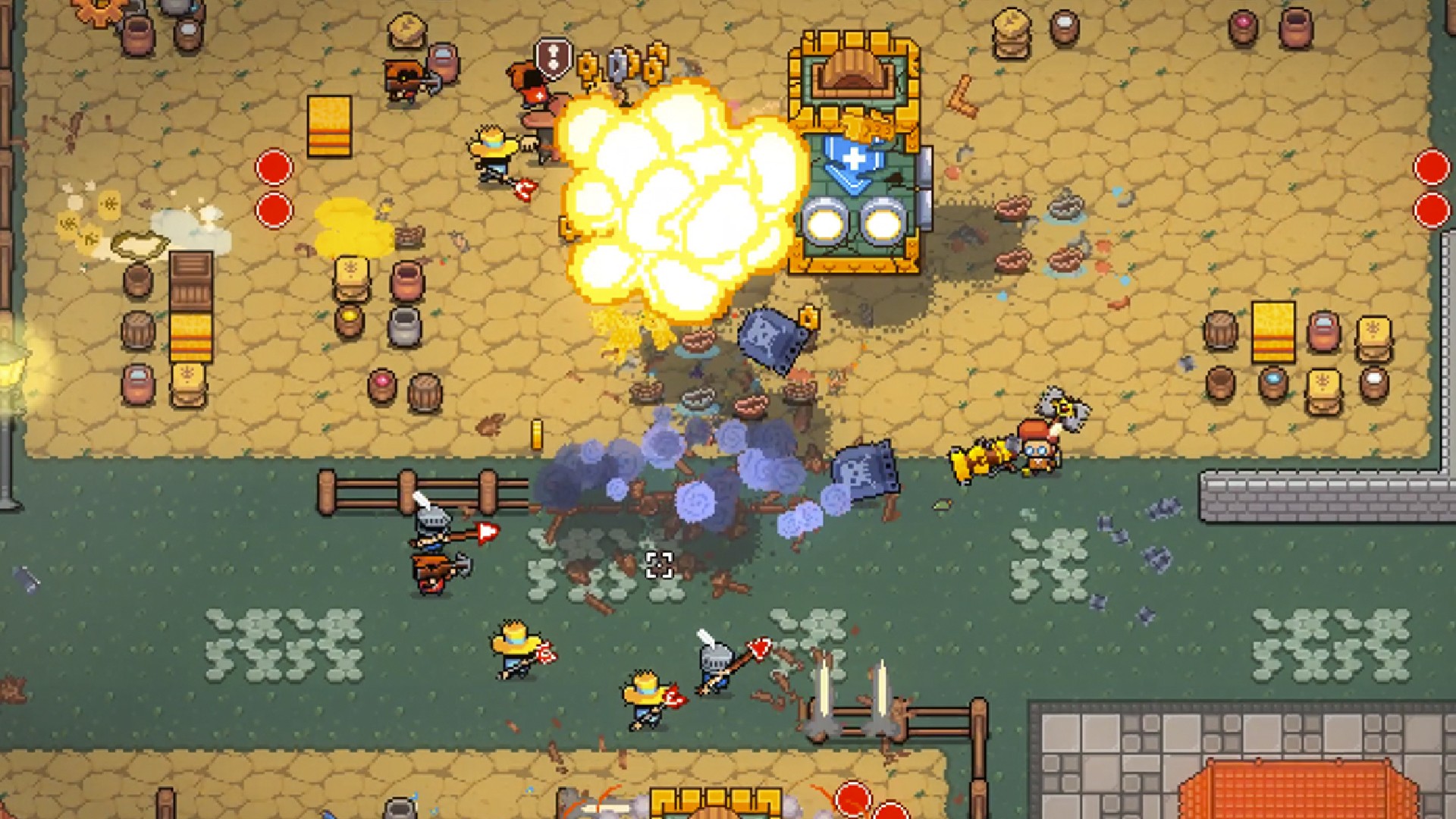 It is also curious how melee weapons have no attributes, relying only on the differences between each type. Once a type of melee weapon has been discovered, it will never change, only the damage may increase. Funnily enough, these weapons also have a black sheep in the family, coming in the shape of the hammer. Hammers deal area of effect damage, but cannot break bullets and need to be charged. What this means is players are left without a way to cover themselves while leading the attack.

Another mechanic in the game is Teo’s special attacks, which must be first unlocked in the tech tree and randomly drop in the maps, making them one use trump cards. That said, some, such as the discharge, are quite underwhelming, being wasted by the automatic targeting. These special attacks mostly seem like an afterthought added later in the development, because of the lack of importance or reliability to them.

Despite having called Woodpunk a Roguelike it is arguable it could be considered a Roguelite. The previously mentioned tech tree includes permanent upgrades to Aquina’s health and jetpack charge, as well as the basic weapons used when a carried one breaks. While it is not a huge amount of metaprogression it may be enough to spark debate for purists of the genre. Regardless of it, unlocking the entire upgrades is a grind job, requiring thousands of scraps to do so.

In conclusion, Woodpunk is an alright game with some glaring flaws. Those able to look past them may enjoy it, though at a price of $15/€ or £11.99 waiting for a sale might be in order. There are other games which offer more for the same price without as much hassle to play.

Woodpunk is a roguelite with some good ideas which weren’t particularly well executed. Lovers of the genre who manage to look past its flaws may be able to enjoy it despite them.