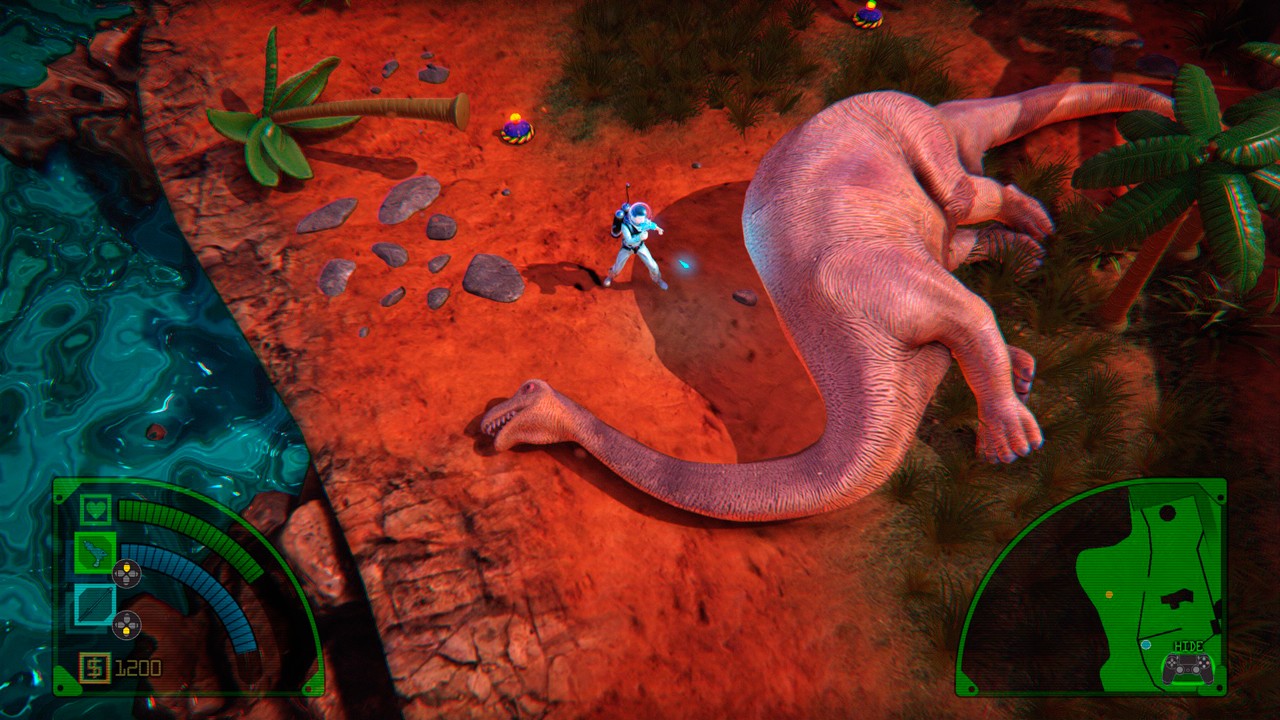 Despite all its cheese, cornball dialogue, and questionable visual effects, there’s something quite endearing about 1950s science fiction films. We’ve received a handful of classics in the genre during this era, from Invasion of the Body Snatchers to The War of the Worlds and so much more. My devoted love for this particular style of film is what initially attracted me to The Deadly Tower of Monsters. Developed by ACE Team and published by Sega and Atlus USA, The Deadly Tower of Monsters is a loving throwback to the roaring 50s era of whacky sci-fi. The care and attention put into the game as a whole is delightful and charming, which is where it ultimately won me over.

The Deadly Tower of Monsters’ unique premise follows a main hero, Dick Starpeed, a heroine, Scarlet Nova, and a lovable robot sidekick named, well, Robot. All of these characters are playable across the roughly five-hour length of the campaign. The objectives are fairly simple: you’re dropped at the bottom of a level constructed like a tower rising to the sky, and have to climb it while battling an assortment of monsters, laser cannons, and just about every antagonistic thing you can imagine from 1950s science fiction. Each level, or tower, varies in challenge, design, and environmental hazard, all lovingly lifted from iconic movies (some of which are pretty tongue-in-cheek to avoid licensing issues). By far, the most unique aspect of the game is its inclusion of a narrator. Essentially, you’re playing through a classic movie, with the film’s director offering exposition and commentary as you progress. 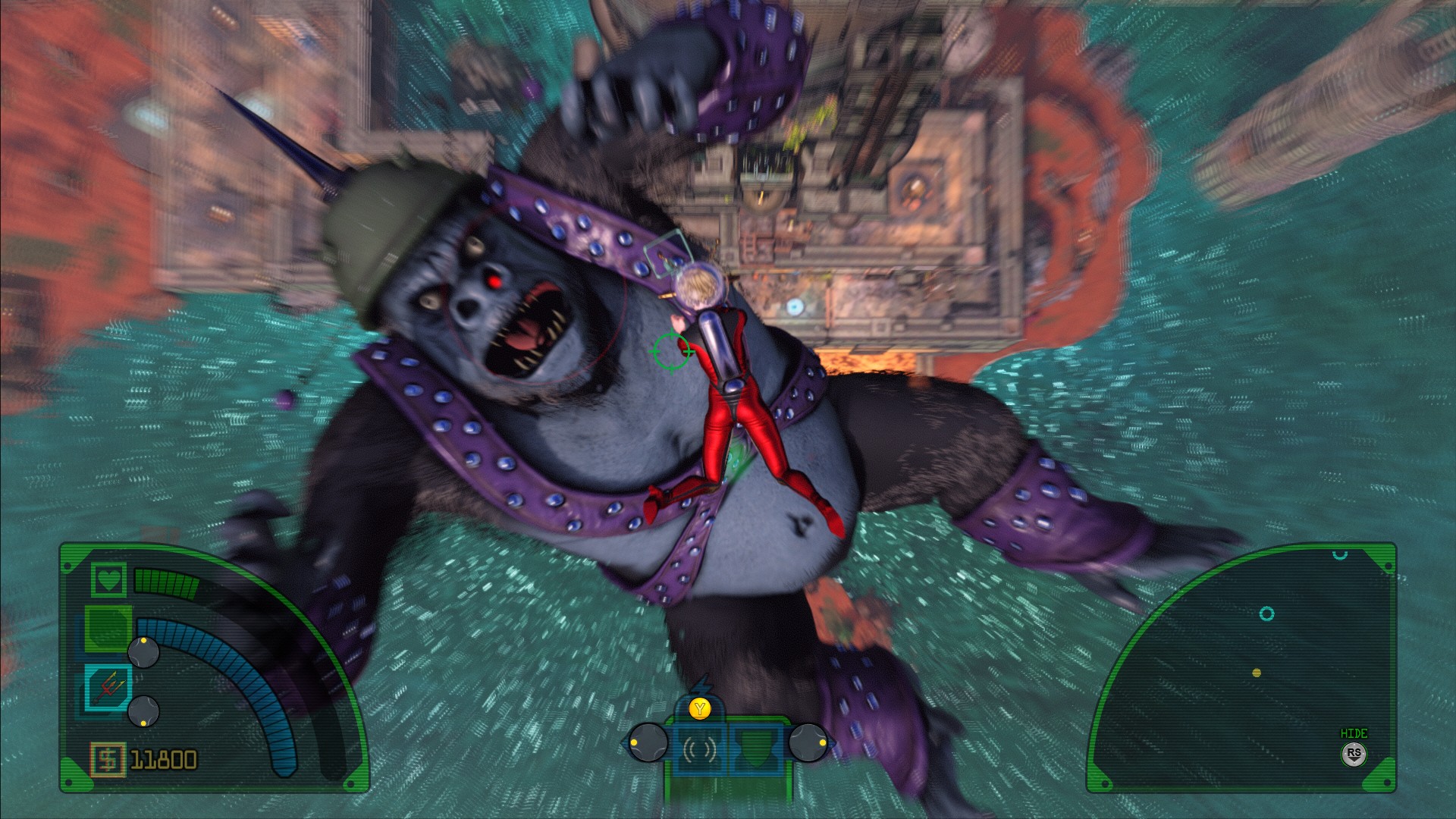 In the wrong hands, this idea could’ve been disastrous as having a constant narrator in a game could’ve been grating to the ears. Luckily, the director is just charming and funny enough to not be annoying, instead reminding me of the fourth-wall breaking narrator heard in The Stanley Parable at times. Not only is the commentary endearing and often gut-busting, but it also acts as an important voice of guidance, providing meaningful and wholesome context to this whimsical world. It’s easily one of The Deadly Tower of Monsters’ best features, which begs the question why more video games haven’t tackled this kind of self-aware commentary style before. Unfortunately, with the narrator constantly providing essential information, it makes it a bit difficult to get attached to the central characters as most of their development and quirks are only ever told to us, leaving them little room to develop themselves within the story.

That said, The Deadly Tower of Monsters’ gameplay is simple yet addictive. Playing out like a top-down shooter/platformer, the game’s gameplay loop sees you blasting your way through hordes of creatively designed enemies. Using a wide array of melee weapons and guns, players can accumulate points by defeating enemies and finding collectibles to upgrade their stats while also opening up the door for more powerful tools of destruction. Nothing is off the table here as far as truly insane weapons go, from laser guns to whips and just about every cheesy classic sci-fi weapon under the sun. ACE Team really embraced the over-the-top, comedic elements of its clear cinematic influences, and it brought a wide smile to my face every time I found a nostalgic reference or Easter egg.

Impressively the enemies were designed to even mimic the limitations of visual effects during the era. You’ll often encounter monsters that move and act like stop-motion puppets, while certain “creatures” are just clearly people in suits parading around. If you’re familiar with how visual effects were accomplished in movies back then, then The Deadly Tower of Monsters has plenty of hidden gems and incredible tiny details like these to make any cinephile blush. Unfortunately, for as great as almost all of these enemy designs are, the AI can feel a tad bit undercooked. In some cases, enemies wouldn’t even attack me and simply stood in a corner hurling insults or making gestures. It’s nothing game-breaking, but it pulled me out of the experience on more than one occasion. Thankfully, all of this forgiven when encountering the game’s numerous inventive and enjoyable boss battles. They’re brilliant homages to popular giant monsters of old-school film. 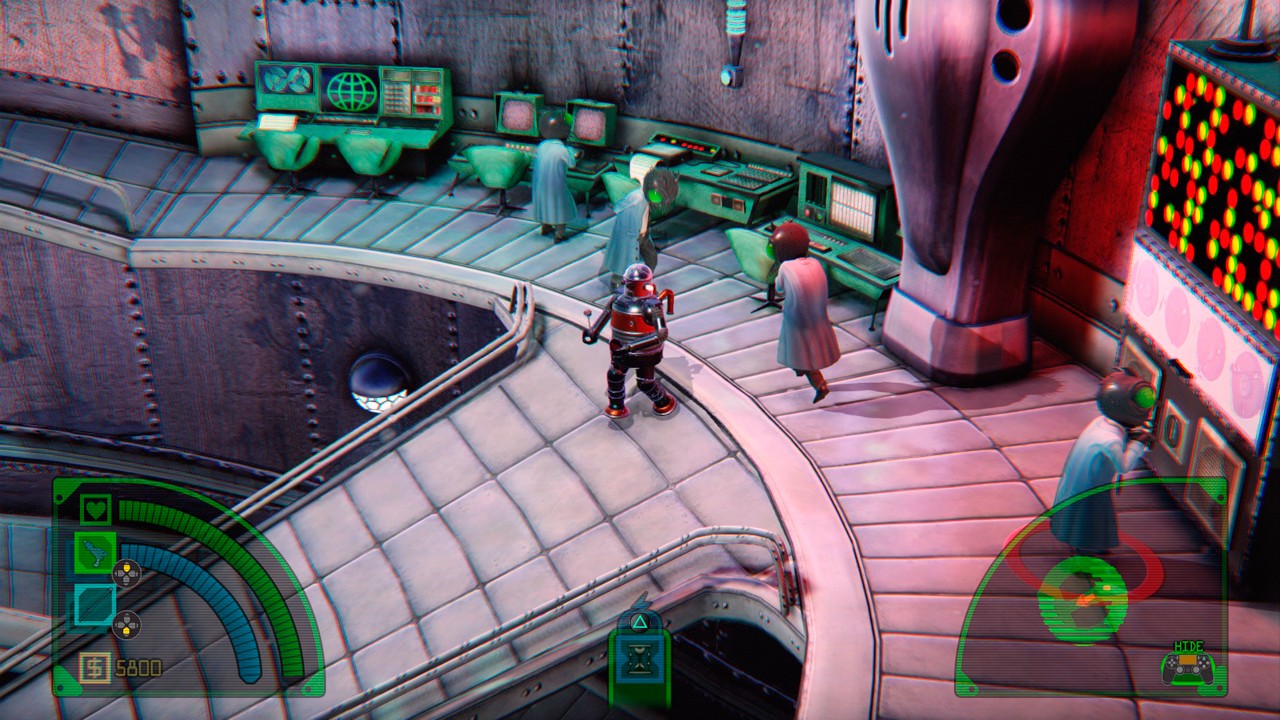 The Deadly Tower of Monsters excels in its visuals, concept and presentation, but often stumbles in the technical department. On a couple of occasions, the frame rate slowed down to single digits, making it extremely difficult to time leaps around the platforms. On the PC, it was also prone to crashing a few times when the action on screen got a bit too chaotic. Thankfully, this was remedied by tweaking the graphical settings, but even on high-end PCs, the performance took several hits that I wish were a bit more polished and patched out. The game seemingly runs a bit smoother on the PlayStation 4, but having to readjust the settings for a game that wasn’t nearly as demanding as many smoother AAA titles wasn’t a great part of the experience.

If you’re a big fan of old-school science fiction and monster movies, and want to live the adventure of goofy lead characters on a whimsical out-of-this-world adventure, then The Deadly Tower of Monsters will make you feel right at home. ACE Team has poured a lot of passion into recreating the feel and style of its classic cinema influences, right down to the aesthetics of its creative and hilarious enemy designs. Sadly, the game is hampered by weird AI and nagging performance issues that hold it back from being a great, highly recommended experience. A sequel might be able to remedy all of these qualms, but until then, there’s still quite a conceptually intriguing and funny game under the hood begging to be dissected.

The Deadly Tower of Monsters Review

The Deadly Tower of Monsters’ classic sci-fi movie aesthetic and terrific sense of humour help elevate it above a few technical issues.