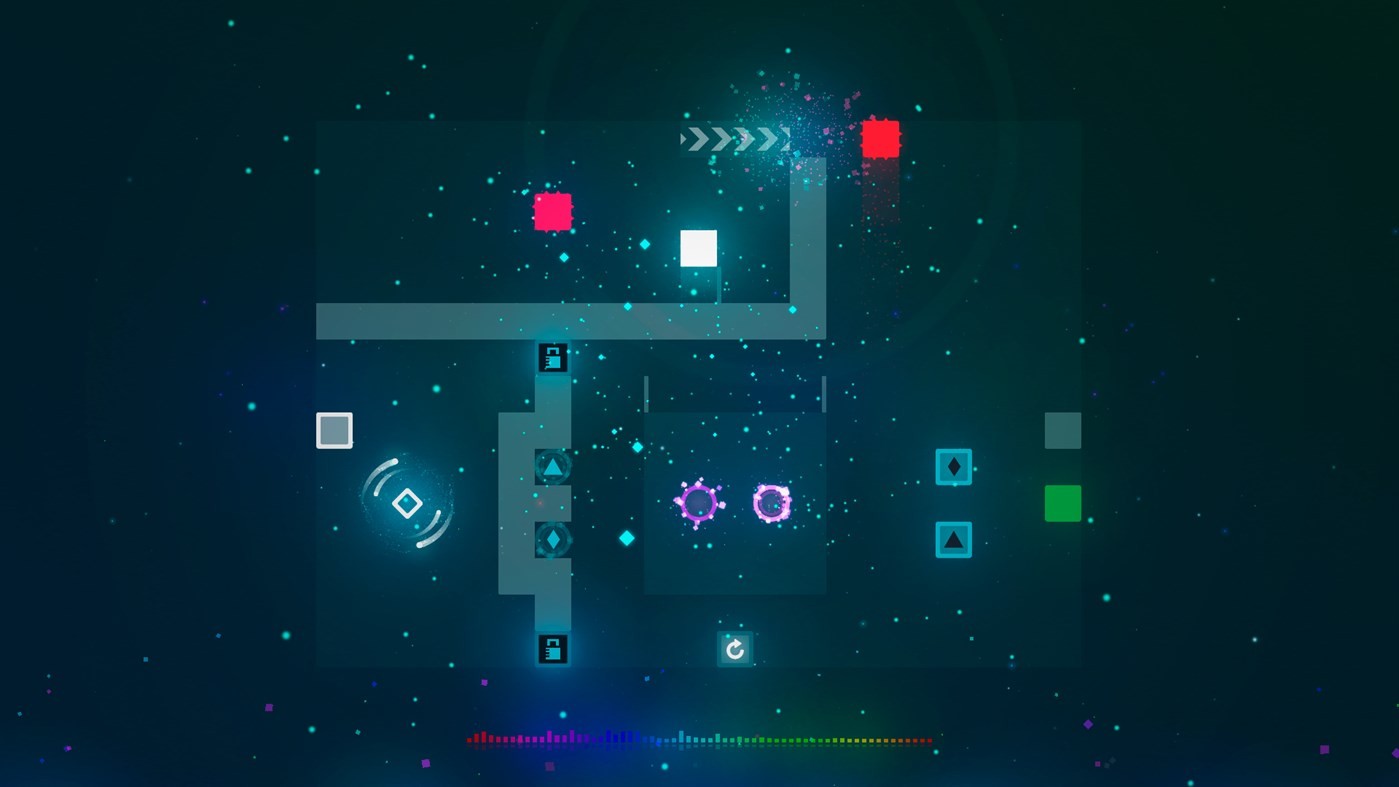 Puzzles have been around since the dawn of mankind, though they are not as complex as some that we see today, man has been interested in solving riddles for what seems like forever. No matter your ability, I believe everyone gets that same sense of achievement when they overcome a problem, and this makes this genre of games so appealing. My latest review title has tapped into this by creating a sequel to the popular and well-received Active Neurons. Active Neurons 2 continues on from where its predecessor had left off, with its relaxing but progressively difficult puzzles to overcome.

Developed by USANIK STD and published by Sometimes You this puzzle game comprises over 100 short, sharp levels for you to test your logic skills. Each of the stages are grouped together in worlds which denotes an invention that has progressed and eased mankind’s existence. As you complete each one, a fun fact pops up to explain how it was created, and how we have benefited from it. Though it wasn’t entirely necessary to have this explanation, it broke up the puzzling demands, and gave each of the worlds a natural breakpoint.

The gameplay premise is as simple as they come. You are a solid white square, and must move around a set area avoiding traps, moving certain blocks, and arriving at the goal. Sounds easy, right? Depending on your skill level, the opening stages can be extremely straightforward. What you’ll find though is that as the game evolves, new mechanics are added that make you have to plan further into the future. Like a game of chess, if you don’t think far enough ahead, you’ll fail at the latter moves, it’ll be checkmate, and you must start again. 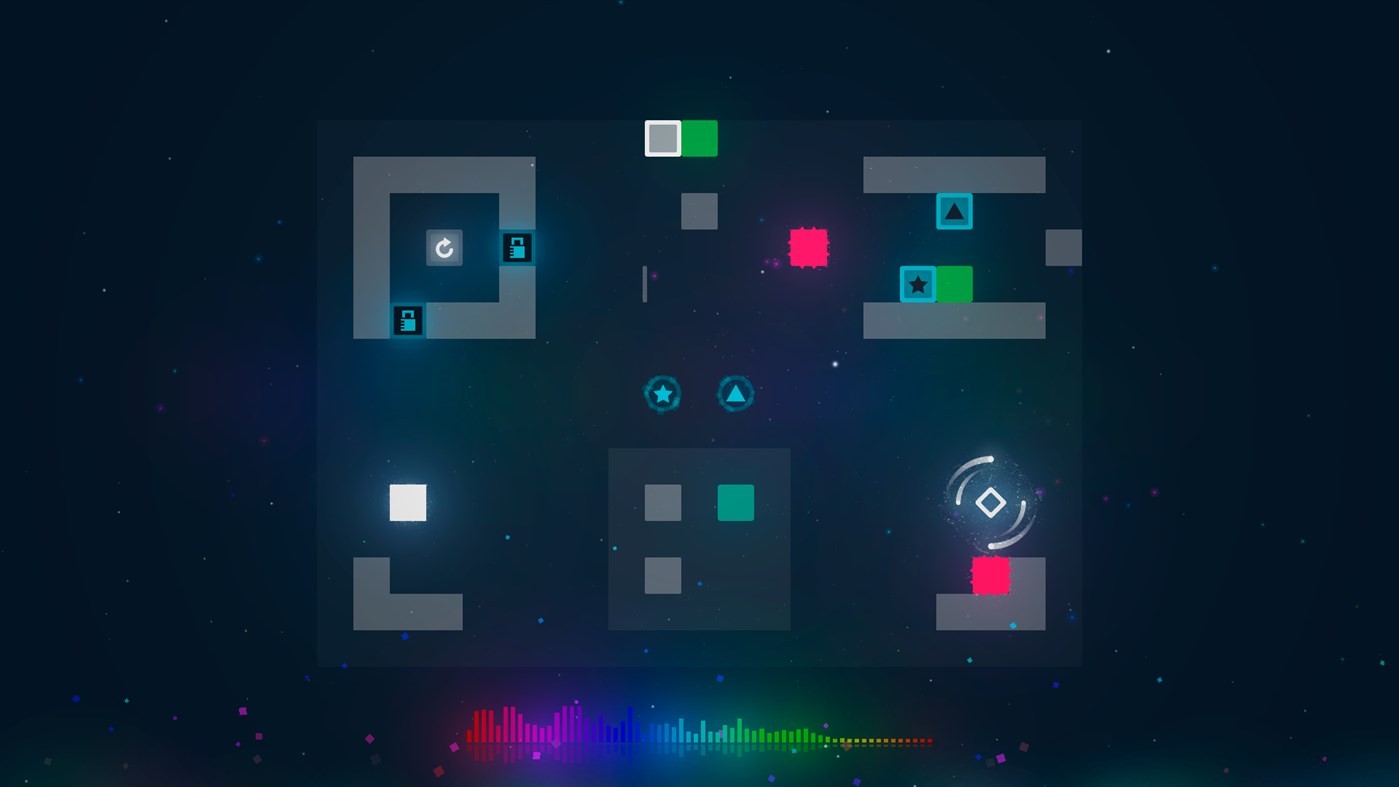 You may think, “How can it be difficult, just move the square from A to B?” The piece only moves through 4 directions; up, down, left and right. If it hits an obstacle it stops, and you must decide on your next move. To make things more complicated, the developers have thrown in a few traps where if you were to enter a certain area, you won’t be able to leave. You can be right near the solution, but can’t progress any further. Your mistake has cost you victory, it’s particularly frustrating, but you only have yourself to blame.

The additional mechanisms increase the titles longevity, and difficulty. You go from thinking about a basic path to the end, to contending with locked doors, red cubes that destroy you, teleporters, world manipulation, and so much more. These additional elements make you as a gamer feel in charge of the puzzle, and helped me to feel involved in the action, rather than just a spectator. I also enjoyed the increase in difficulty, as the early game was far too easy for me. USANIK STD wanted to make sure that their game had a little something for everyone, alienating none of its player base, so they kept the solution button from its predecessor. When I reviewed Active Neurons I stated my dislike of this unlimited tool. It was too easy to stop working on the problem, and be told the way forward. I’m not against having a hint option, but to have unlimited solutions on tap meant that you could complete the game without testing yourself. This option should be limited per playthrough, so that its use is restricted, and only used when necessary.

This game has taken a basic and relaxed approach in its presentation, both the graphics and the audio are simple, and allow you to focus all your energies on the core principle, the problem-solving. The action takes place in a tabletop 2D perspective. Each level is set out before you, with a clear ability to see all the moves required in order to proceed. The developers have done well to create a crisp and distinctive look to each interactive item. Without thinking about it, you associate the colours and look with their task and how they are going to influence the problem in front of you.

The audio is quiet and calming, and reminded me of a waiting room, or lift music. It never once overpowered the situation and suited both the genre and theme perfectly. The simplistic nature of both the audio and the graphics worked really well, and proved that you need not have AAA rated graphics or in your face music to make a game work well. 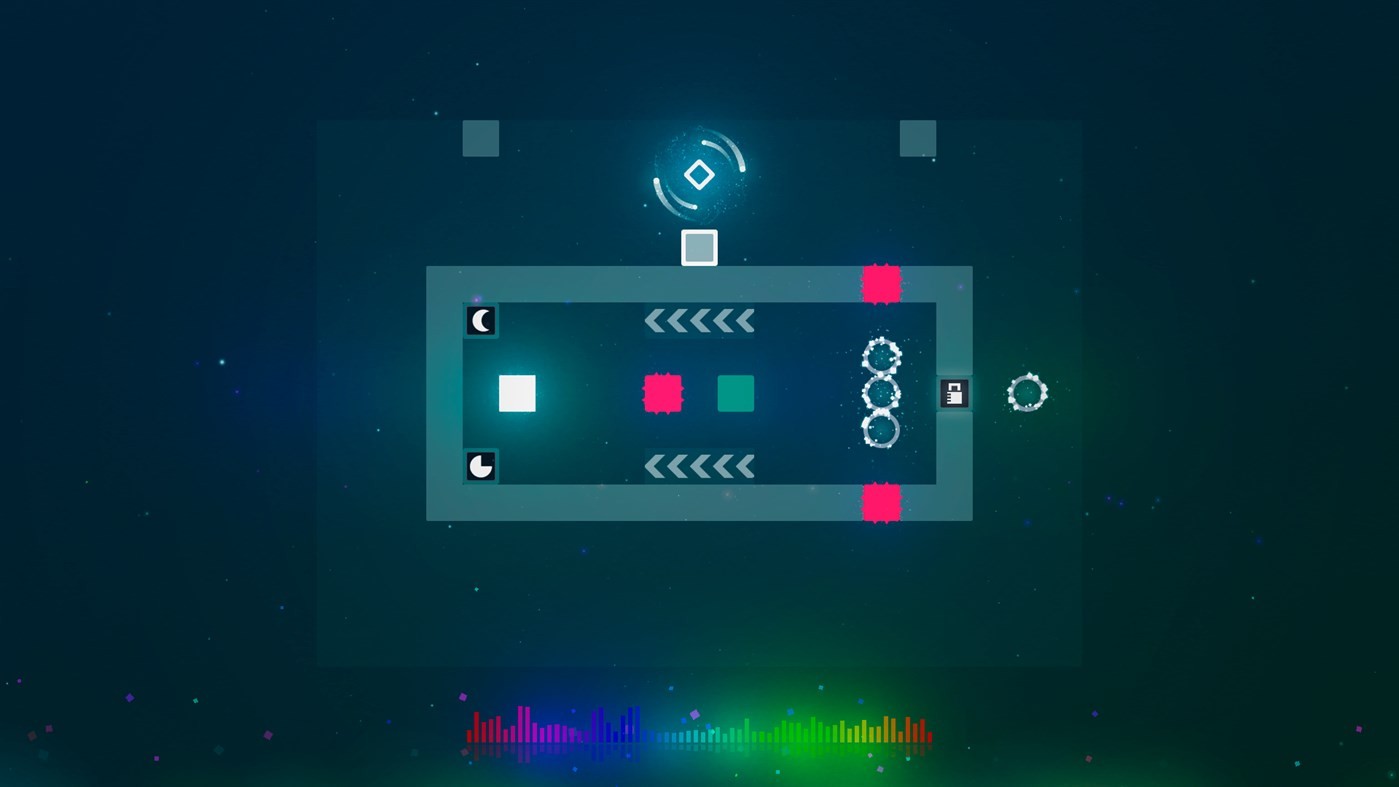 As this game only requires you to move your cube using 4 directions, it’s not exactly hard to master the controls. My only concern was that it would be too sensitive, and you’d make mistakes as it would move when you didn’t want it too. Luckily, this wasn’t the case, and it was very easy to pick up and play.

Like with most puzzle titles, the replay value is impacted by the lack of variety once the game is completed. This one isn’t any different. As you come to the end, you will have gained all the achievements, and there will be nothing else for you to do. Once you get to the 100% mark, there is no reason to return. The developers missed an opportunity in creating a rank system based on moves taken to complete each stage. This would have given you the chance to replay the game and aim for perfection. Without this, and the ability to find the solution by pressing a button, the difficulty and replay value have been reduced significantly.

My last statement gives the impression that I wasn’t impressed by this title, and that isn’t the case. I really enjoyed my time in this puzzle experience. It was just a shame that it missed a few opportunities to push it to the next level, and to up the difficulty for veteran gamers. The fun facts were a nice touch, as were the additional gameplay mechanics from the first game to this one. All the components are simple, and work together nicely to create an enjoyable, demanding title. Do I recommend it? Of course I do. This one will interest players of any skill level, and though it’s easier to play if you have tried the first one, it’s not essential. Can you overcome the traps and problems in front of you to reach the goal? Of course you can, after all the developers have given you a solution button if you do get stuck.

A fun and fact filled puzzle title that adds plenty of new game mechanics to keep the action fresh.