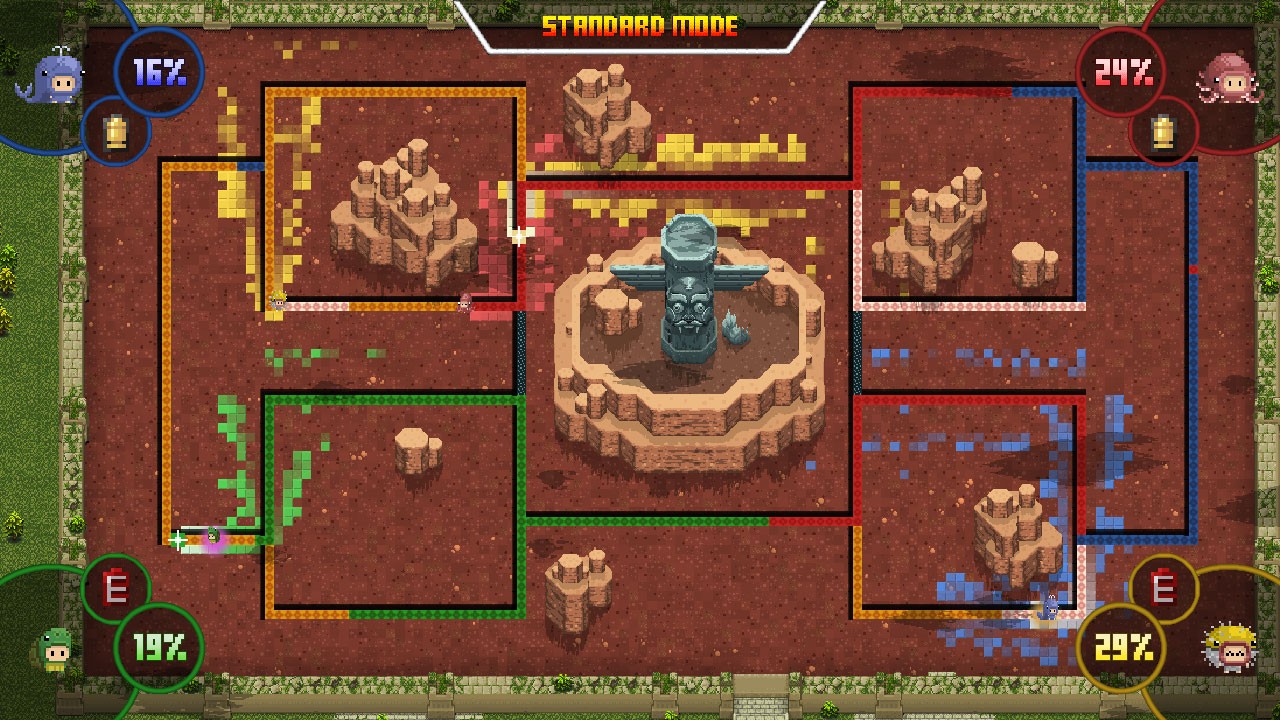 GORSD from Singapore-based indie game publisher and developer Springloaded, is a top-down action game, blending area covered gameplay and arcade rail-based games. It’s as though Splatoon and Pacman had a very strange child. The game features both a multiplayer experience and a single player RPG campaign, the latter being the primary focus of this review, as much that can be said applies to both game types.

The description of the campaign on the Eshop is ‘Born from a womb-eye, you discover a world seething with challenges created by an unknown power.’ This is a fantastic example of how the game unfolds. You do not understand what is going on, but your curiosity is piqued. You are introduced to a strange and the sometimes grotesque world, and you are left to figure out what anything means. It’s captivating. The campaign for GORSD does such a good job of creating intrigue, it just hooks you straight in. Why are you born from an eye? What are the mysterious symbols on the ground that light up when you step on them? What’s with the giant floating heads? With the promise to answer some of these questions on your quest to discover the meaning of the GORSD, you are led to a temple in which you face multiple areas. The game then takes on a more traditional formula of beat the levels and then face the boss. But the variety of game types keeps you on your toes enough that it doesn’t feel monotonous. 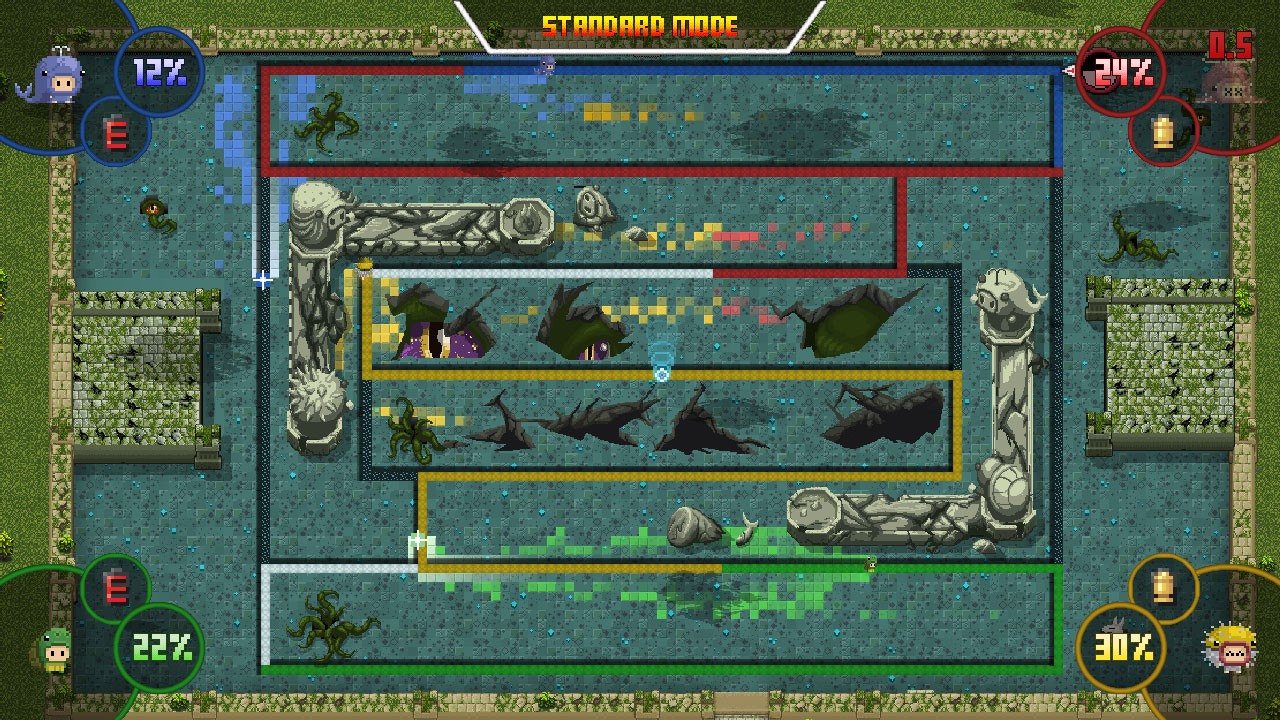 As previously mentioned, the gameplay operates on maps like Pacman, where you can move across any of the predetermined routes. Each level has a different map, and different objectives. Your character is equipped with a single bullet. This is no ordinary bullet, however, if you shoot a direction, the bullet with go around corners that direction until it either hits something, or disappears. This mechanic is admittedly tricky to master, but very handy once you get the hang of it. There are two overarching categories that hold smaller game types: Area covered, or combat. The area covered game types are harder than the combat, purely based on the fact that it is usually yourself against two or more enemies. This especially becomes the case as you progress through the campaign as the AI becomes very aggressive. It can sometimes take a while to complete a level. If you fail too many times, an interesting mechanic is activated where you are summoned to a chamber and you transformed into a worm. This turns the difficulty to easy mode and in order to be restored you have to complete enough levels on normal again. Unfortunately, there comes a point where it feels like beating a level is more down to luck than it is to skill. I eventually had to accept my wormy fate so that I could move forward with my playthrough. 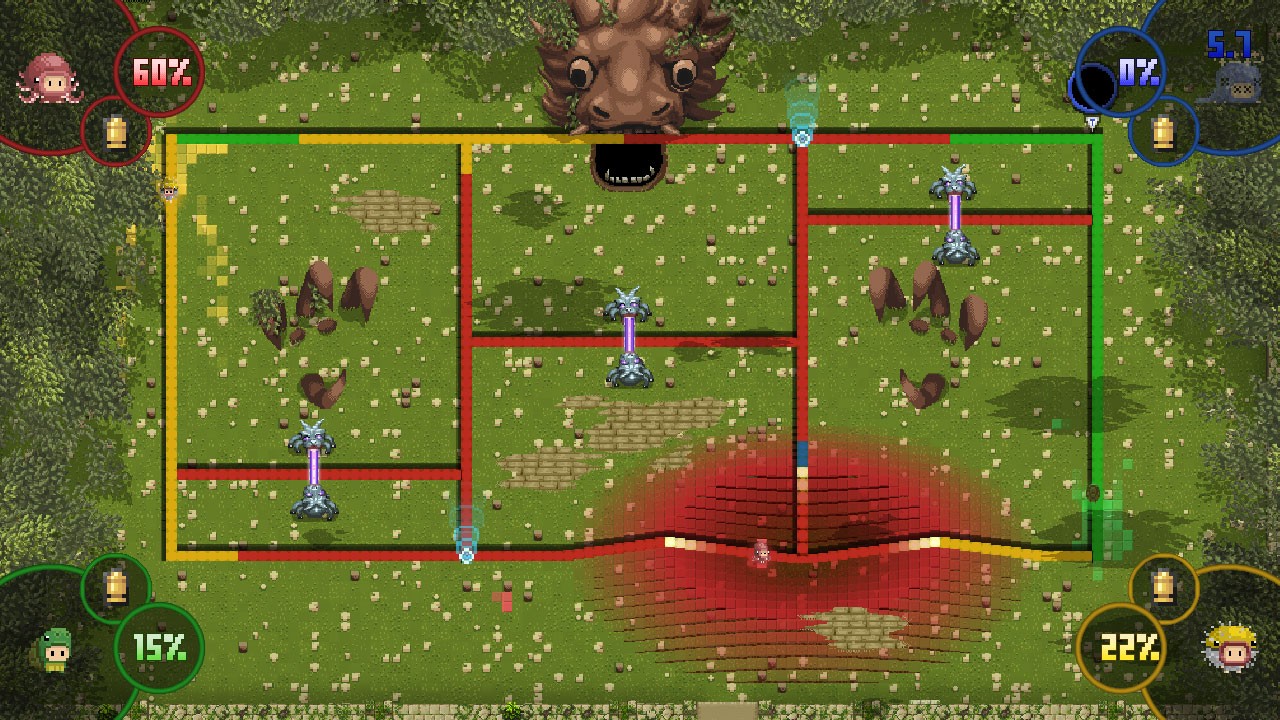 GORSD uses a pixel art style. This is the perfect choice for the game, blending well with both the RPG aspects, and its grotesque otherness. The main character’s design is adorable, being a little octopus that runs around. How could you not love him? However, to see him rip himself out of an eye, and then further be torn to shreds to become a worm, is horrifically gruesome. And when you are the worm, a trail of blood follows you in the overworld. The contrast between cute and horror fuels the psychedelic tone of the game. It’s unpredictable, and that is what makes it so engaging.

GORSD is chaotic and addictive. The uniqueness of its concept and gameplay make it stand out from the crowd. Offering challenge, intrigue and all-around weirdness, this game is worth picking up from the Nintendo E-shop for £13.49.

>GORSDfrom Singapore based indie game publisher and developer Springloaded, is a top down action game, blending area covered gameplay and arcade rail-based games. It’s as though Splatoon and Pacman had a very strange child. The game features both a multiplayer experience and single player RPG campaign, the latter being the primary focus of this review, as much that can be said applies to both gametypes.