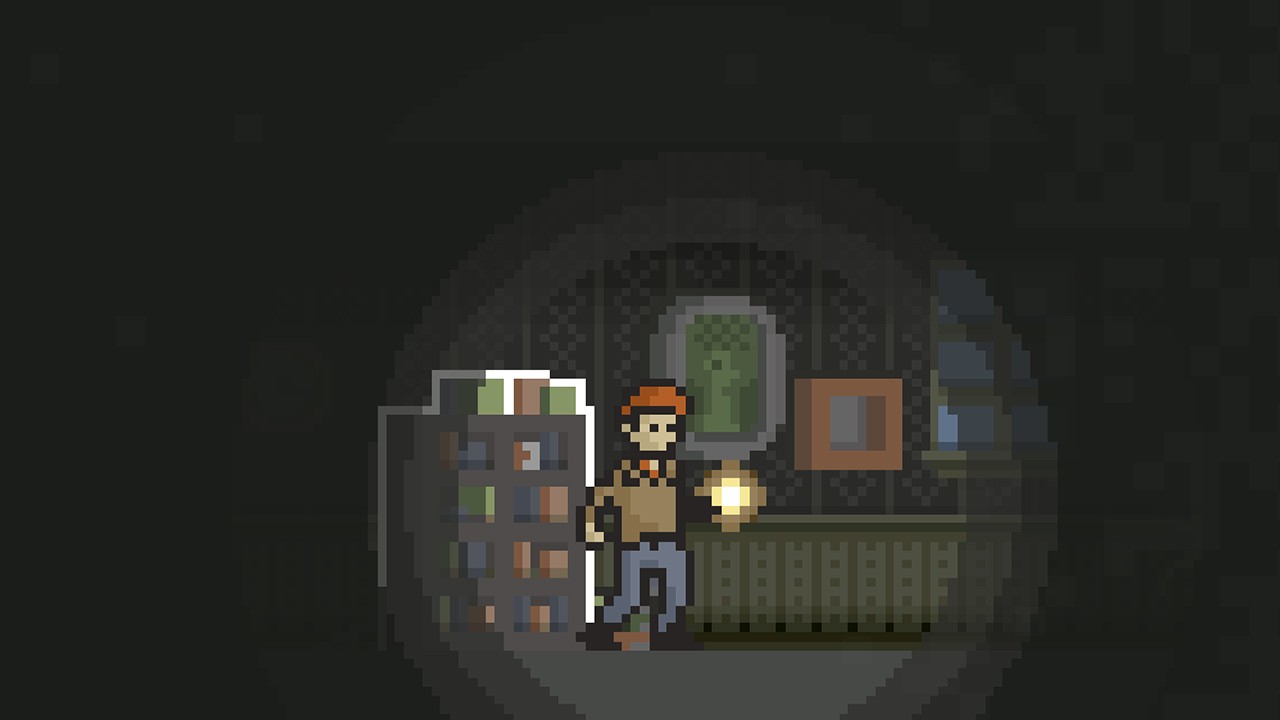 As much as I love movies, there is nothing I like better than watching a director’s commentary when the film is finished. As a child, I remember watching and listening to the thoughts of many directors, with Kevin Smith being one of my favourites: his notes on the failed Clerks: Animated Series was a joy to hear (though his happy announcement that the show had been picked up still makes me wince even today). It’s wonderful to get into the creative mindset of the makers, and sometimes it’s a peek behind the scenes (Apocalypse Now), a wonderful trip down memory lane (The Goonies) or just a snapshot into how lives used to be (Twilight). Games are rarely afforded the same luxury, but, in recent years, more and more game developers are adding them in, either in re-releases or anniversary moments. The commentary on Gone Home and Duke Nukem 3D, while both wildly different, were equally fascinating to experience. Now, another indie title has come to the Switch and brought along a fresh set of information with the release of the Benjamin Rivers classic Home: Postmortem Edition.

Home is a pixel-art horror game that is entirely atmospheric in nature and also in execution. You play a man who awakens in a seemingly unfamiliar house with no memories or clues as to how he got there. After discovering a flashlight and stumbling out the door, he quickly discovers a dead body, and it dawns on him this might be a bad situation. The only thing that comes into his mind is a woman’s name: Rachel. Where is she? Is she safe? And, seriously, where the hell are you? In the next couple hours, the player will explore and make decisions that may or may not lead to some final answers, and, best of all, the ending is ultimately one that you decide: are you a victim or a villain?

Despite the appearance and the selling points, Home is, for all bells and airs, a walking simulator. There are, rarely, if ever, moments where you need to do more than plod along and interact with things as they appear. For the first time since playing through, fans can feel frustrated and confused at the presentation. After all, the screen is very narrow in view because of the flashlight’s perceived lighting. There are doors, windows and other locations that are locked and may never be accessible, but still will be highlighted to give you the options to figure them out and learn for yourself. In a time where horror games have become incredibly complex and frightful vessels of adventure and tension, the dread and slow build of Home can be very flat for players who are looking to play through quickly. This is a shame, because Home can only construct one of the best narratives in the pixel art generation. 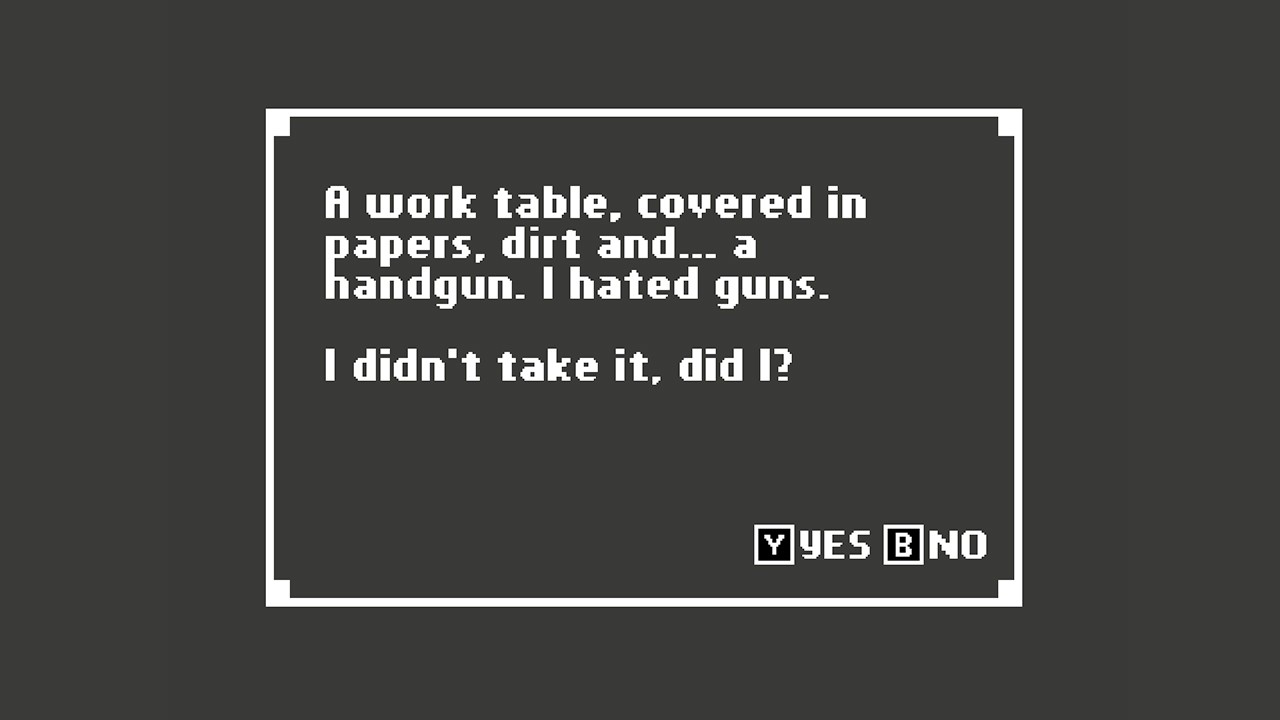 Take, for example, the way the dialogue and inner thoughts of the protagonist are displayed. Instead of just having short word bubbles or spoken sound, the narrative takes up the whole screen in a silent-movie style read panel. The words can sometimes be offhand and innocuous: a thought about a picture in the trash, or your own dishevelled appearance in the mirror. Sometimes, though, they open up the choices of the game, and these choices are truly the makeup that paints how the game plays forward. The minor decisions, as they are the only “actions” of the game, gear you towards what will come in the end, and guide you towards what the fate of your missing family will be and your involvement therein.

Also, the minimalist way the game is designed helps to build further tension and suspense throughout. It takes only a moment to realize there is no music within Home: Postmortem Edition. In a landscape where games and titles can have epic, sprawling, orchestral sounds, it’s downright eerie and disturbing for there to be zero music. Granted, I’m hard pressed to think of the appropriate soundtrack to figuring out if you are a murderer (kazoos?), but the absence of music is more telling and engaging than having some. It reminds me a lot of What Lies Beneath, an ultimately mediocre thriller that made a modern and bold choice to go musical free and brew up real fear through the lack of much to say how you should be feeling. Home evokes the same ideas, further doubled by the occasional insertion of sounds from the seemingly empty house, which can generate short, cheap but effective scares.

You’re not going to get a fast and exciting journey with Home: Postmortem Edition. This is an art piece, plain and simple, and it’s telling a story in a very deliberate, conscious way. As a result, it’s the perfect candidate for the Postmortem Edition treatment, which finally pulls back the curtain and gives players a look into the creation of the game. Thumbing through the gallery immediately tells me two things. One, I wish I had gotten that limited edition original version, because any game that was pressed on floppy disk after 2000 is a joy and I would love to have it in my collection. Two, it’s insane to see the level of detail and commitment that went into crafting Home. The blueprints for the house design are a sight to see (careful, close examination has spoilers), and the photos of the abandoned houses they explored for “inspiration” are seriously horrifying. I like that seeing those places would have inspired me to never leave my apartment again, and, instead, Benjamin Rivers (which is the studio name and not just one dude) made a game. Truly baffling. 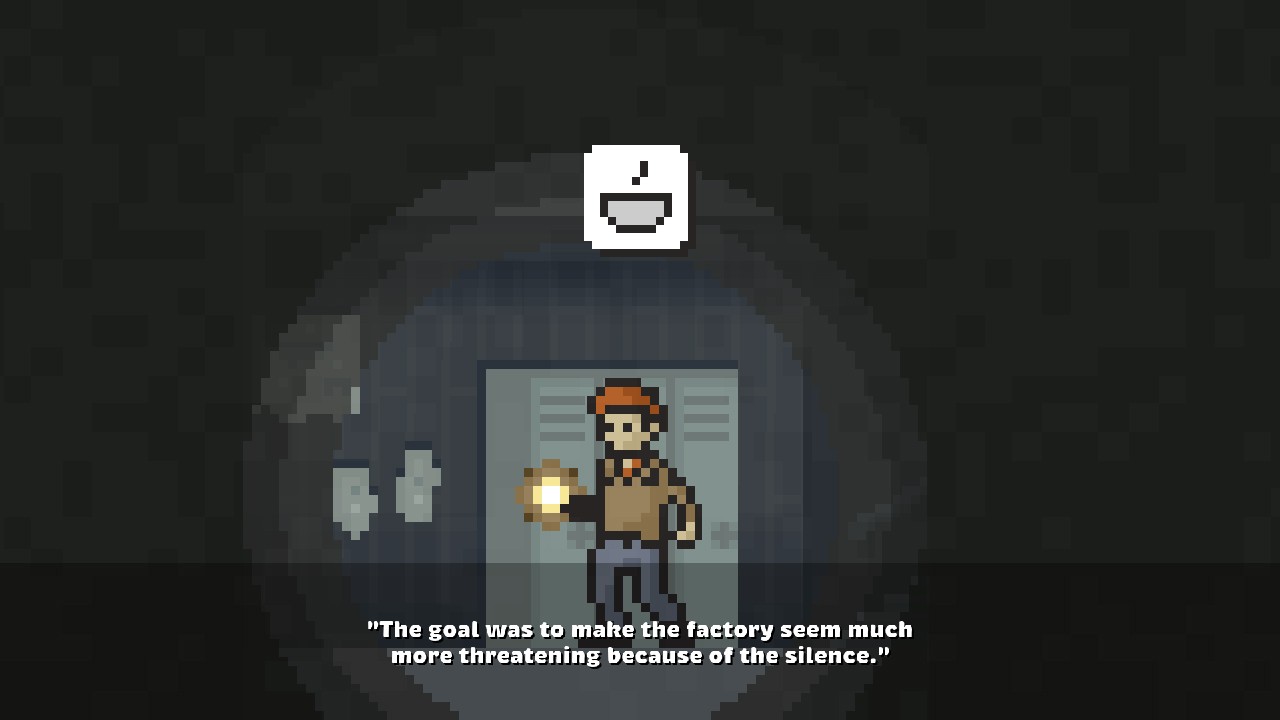 Secondly, the commentary of Home: Postmortem Edition is utterly fascinating. Hearing the notes and ideas that went into several very specific decisions is wonderful to hear from the director, and the designers did a great job of showcasing their own thought process without actively dismissing the theories of others. See, since Home is such an open ended game, people have concocted their own reasonings for years now, and it’s really cool that the devs were able to put interpretations forward from their own mouths and heads without saying “this is right, this is wrong.” Additionally, the commentary is inserted in a great, non-intrusive way with the option to hear it or not (plus the option to just turn off the commentary entirely for a natural playthrough). The Doppler effect of the commentary also adds to the creepiness: if you wander too far away from a commentary marker, the voice continues in a very low murmur that can barely be heard, and that was my own little fun I made.

Going into Home: Postmortem Edition and expecting the same level of scares and action as the average Capcom title is wrong and will leave players disappointed. Understanding and knowing that this is a unique tale being told – and having it told in a different, branching style – allows for a serious enjoyment to be had, a studious exploration into humanity’s psyche and the way that the player and the character both work together to reach a conclusion. It shows how your actions have consequences on the world around you, even if they don’t directly affect you. I thought this was a wonderful dive into a remarkable game and encourage any aspiring indie dev or indie aficionado to come back Home: we’ve been waiting for you.

I thought this was a wonderful dive into a remarkable game, and encourage any aspiring indie dev or indie aficionado to come back Home: we’ve been waiting for you.