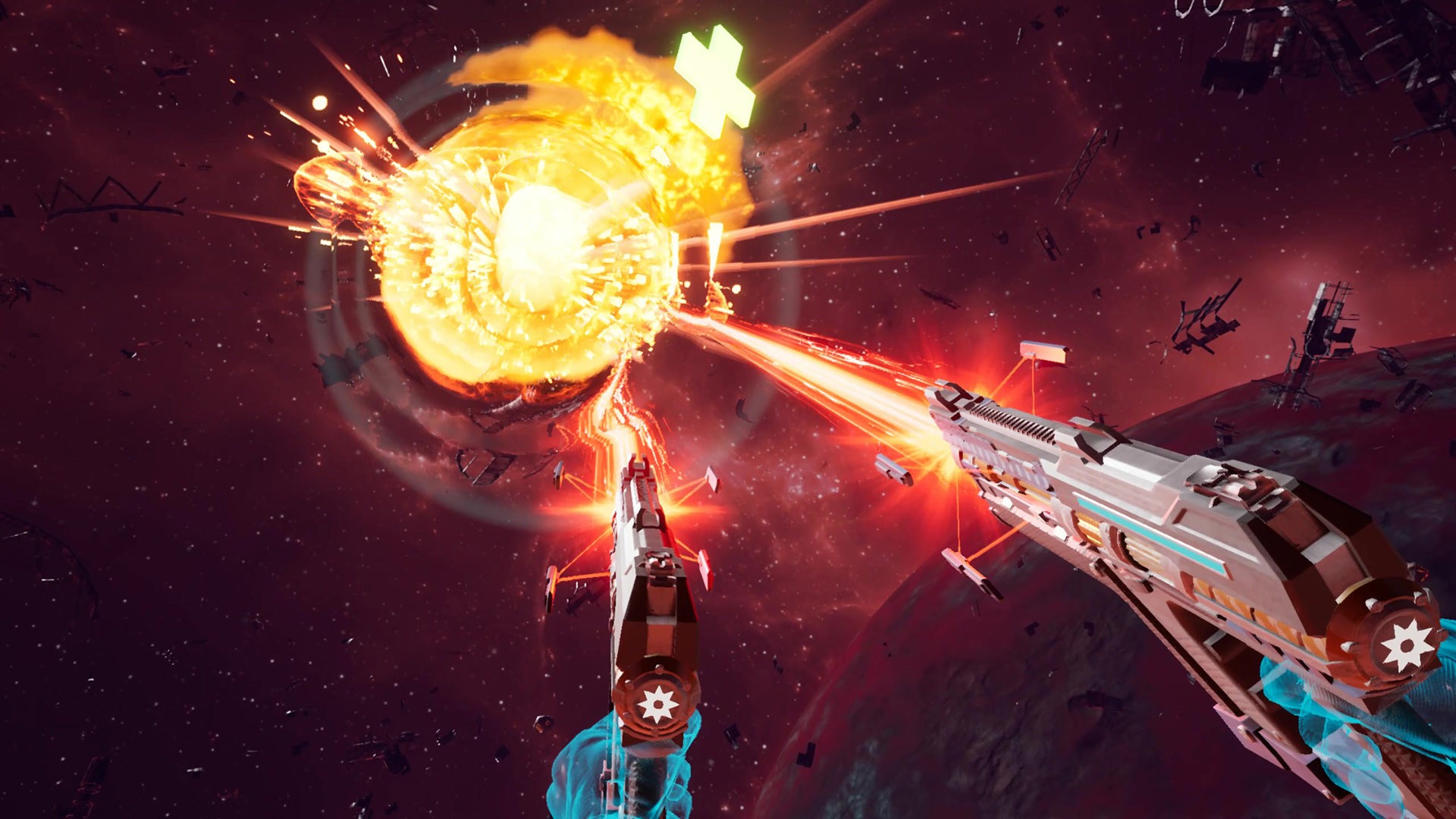 Galactic Rangers VR is an immersive space first-person shooter brought to us by DGMA! It was released on November 5th, 2019 and was met with positive response from the community for having the effect of being dragged into an arcade game from the 80s! There is also something important that I would like to mention, and I have already mentioned it in my review for House Flipper VR. Like with all games that you experience in virtual reality, make sure to have enough space in your room to move around so you don’t bump into anything. Swinging your arms around and hitting objects in your room can lead to destruction of equipment, but most importantly, it can harm you dear readers. Always be alert of your surroundings whenever you play a game in VR! With that being said, let us dive into the review!

The main plot pretty much comprises you taking the role of a Galactic Ranger along with some others. The Galactic Rangers have been protecting the galaxy for centuries, and lately there has been a growing threat. You and the other rangers were ordered to take on the threat and destroy their lair in order to save the galaxy forever! 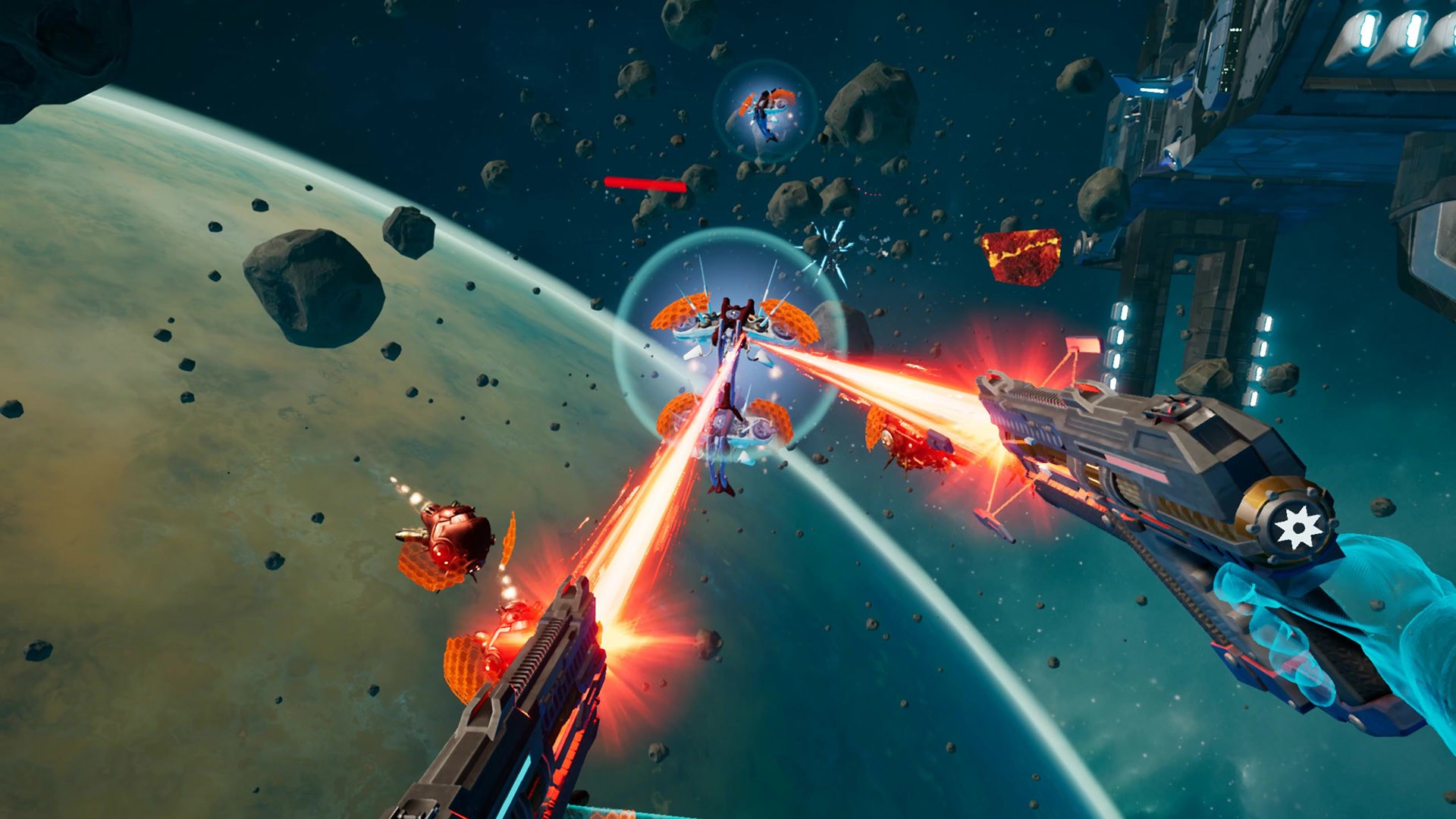 When I first started up Galactic Rangers VR, I was being placed in some sort of space hangar in which the main menu was in. The first thing I did was to adjust the settings until I have reached a fluid framerate in order to have the easiest time navigating around as possible. When I jumped into action, the platform I stood on moved out into space and the action began! I was armed with two blasters, one in each hand, and I could also make a barrier appear with one hand which will allow for a more tactical approach. The only downside was that you wouldn’t be able to use your blaster on the corresponding hand while having the barrier out. Nonetheless, I still appreciated a more trigger-happy playstyle! So the barriers really weren’t anything for me.

To summarize the combat, it will pretty much consist of you dodging projectiles as well as blasting your enemies away! Remember earlier when I was talking about the barrier? Well, if you really want to use it in a clever way, you should block quite frequently since some enemy projectiles actually ricochet off the barrier. This will allow you to fire back enemy projectiles back at your foes! To be honest, if you actually spend quite some time moving around really quickly, you soon release that you will get exhausted fast. I suggest either taking some breaks or seeing this as some sort of physical education class. I myself get distracted quite easily and don’t really pay attention whenever I’m exhausted or in need of a break. But hey, the choice is yours! 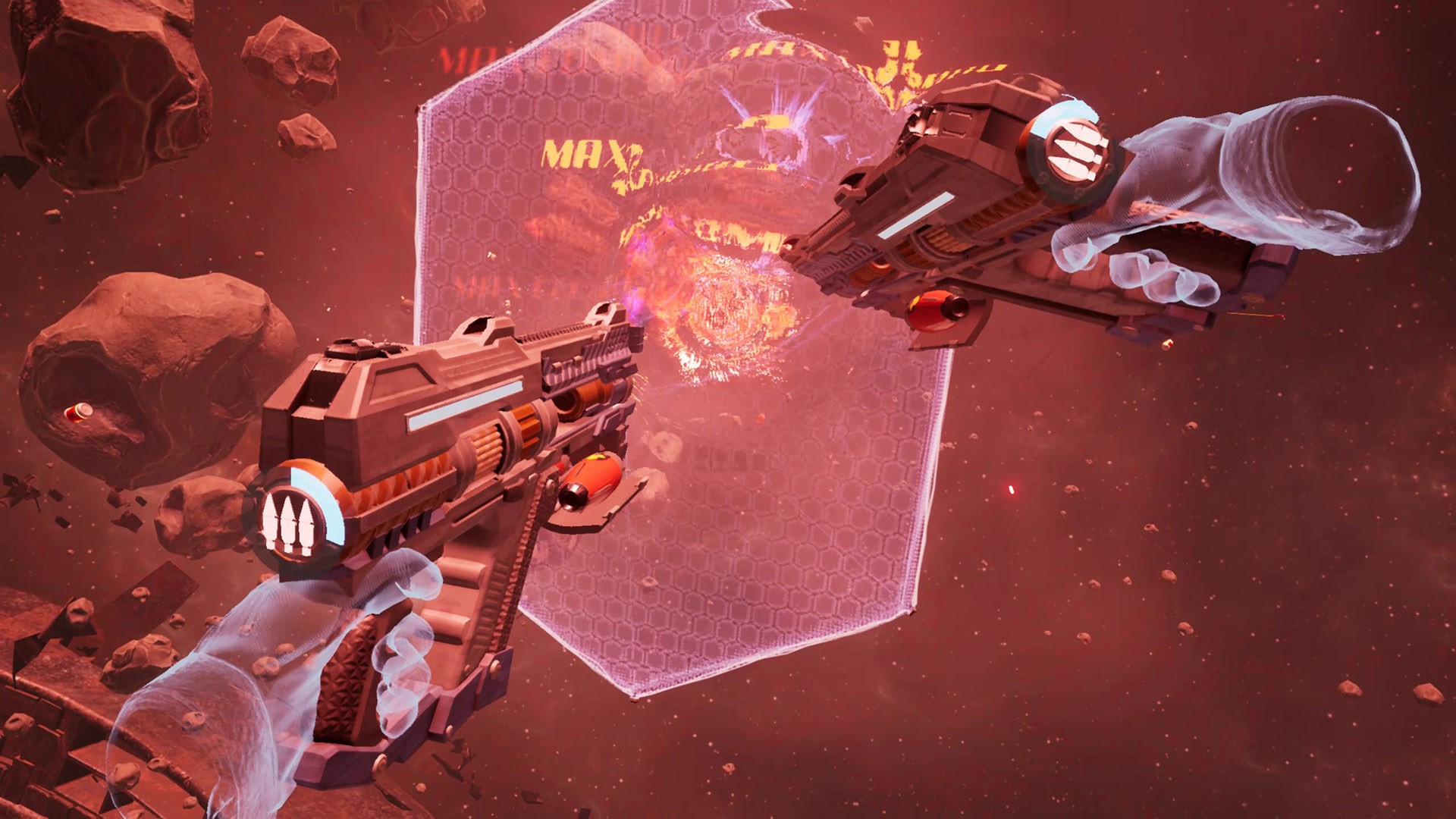 After playing for a few hours, I just repeat the same thing repeatedly until I have squeezed out the highest possible score I personally can. As earlier mentioned, this title already reminded me of an arcade game from the 80s but a lot more immersive. The colour palette is pretty good looking and mostly comprises blue and brown while you are out in space. It’s a nice contrast, having relaxing colours in the background, combined with the stressful colours such as red for some enemy projectiles. It makes them a lot easier to spot! Will you be able to obliterate the evil space pirates?

At the end of the day, there are plenty of virtual reality games out there and the amount of “good” ones are quite rare. But I just gotta say, Galactic Rangers VR bloody delivered! The description stated that this title is easy to learn and tricky to master. What can I say? I couldn’t agree more! If you are in need of a space themed VR game, then I would suggest picking up this title since there really aren’t any other virtual reality games that are executed quite as well as this one when it comes to the gunplay and satisfaction.

In the end, Galactic Rangers VR is a strong candidate when it comes to being a space shooter! What really kept me playing was the satisfaction of getting another highscore!