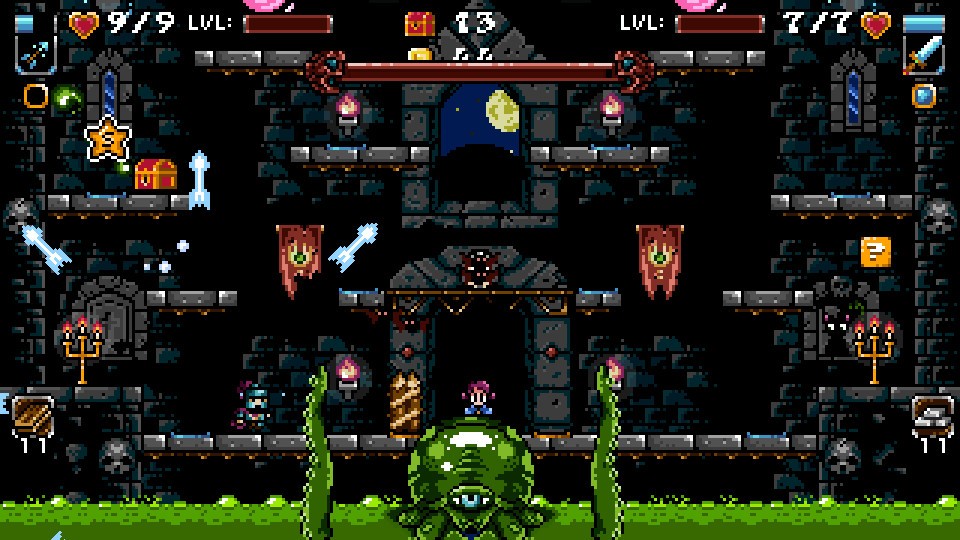 We all know the tale where the King goes away for a while, leaving his daughter the Princess to run the Kingdom. By doing so, he invites the creatures from the underworld to try to take over! No, not familiar with that story? Well, that is the foundation for my latest review title from developers FobTi Interactive. Jet Set Knights has been published by Ratalaika Games, and joins their ever-growing library of fun, short, and unusual indie titles.

This title is an old school platform action game that has some light RPG elements. You control one of four knights either in a solo or couch Co-op experience. You must defeat all the monsters that have arisen from the underworld and protect the Princess and the villagers. Princess Kitty has little chance against her evil foes, and if they somehow get past you and arrive at her feet, then it’s game over, and all the progress is lost.

Each of the 4 characters that you choose has a special ability that will help you be victorious. You are restricted to selecting just one level to start with, and the only way to unlock more and proceed further is to defeat the boss found at the end of each stage. None of them are particularly challenging, but it takes a bit of time to work out a winning strategy. Unfortunately, I was killed countless times on my way to victory, so patience is required to complete this game.

The saying that the best form of defence is attack is pretty accurate in Jet Set Knights. But, building walls around the princess is also key. Failure to improve your defensive capabilities will all but guarantee failure, so make sure you take advantage of the tower defence game mechanics to help you on your way. 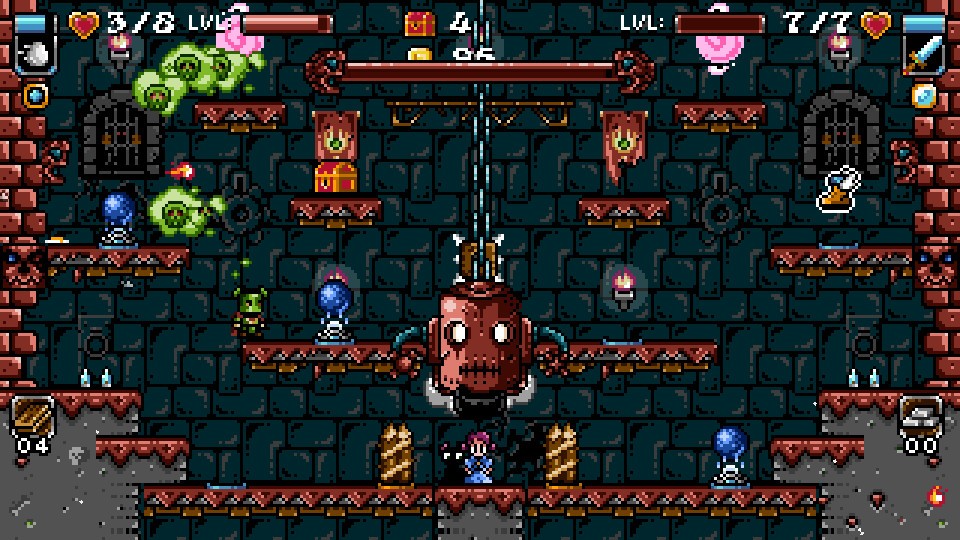 All the power-ups, treasure chests, and building tools are randomly generated, so most of the time it’s as much luck as it is judgement with how the game plays out. You begin each playthrough with the latest weapon that you have unlocked. These increasingly powerful tools will help you mow through your enemies, and will make light work of the challenge ahead. The treasure chests that you find help you unlock further weapons, but be warned, any progress towards a new toy will be wiped if you die, so make sure you collect enough chests, or even better don’t perish.

As you kill enemies you’ll collect XP, once you gain enough, you are free to upgrade one of four stats; Power, accuracy, speed, or health. This levelling up gets wiped when you die, and how you improved your character will change how you approach each stage. This RPG element moved Jet Set Knights from being just another old school platform title, to something more in depth and challenging.

The monsters always start in a fixed location, and they make their way towards the Princess on a set path. This gives you plenty of time to think of a plan and work out a way to overcome them. Your melee weapon isn’t your only form of attack, you are also blessed with the ability to cast spells and shoot arrows. You can pick up masks to chew anything in your path, and a helpful tool that makes our feeble princess attack anyone in sight. If all else fails, and you don’t think you can kill them, jump on their heads a la Mario style, and defeat them that way. I really liked how many attacking options there were, and the random nature of the drops meant that you could rarely rely on just one method to proceed.

The developers have not only gone old school in their gameplay, but they have kept the retro theme for their visual approach. Pixelated sprites and earthy tones make up the body of the graphics. A fixed screen perspective allows all the 2D action to play out in front of you. Though it wasn’t a masterclass in how modern day gaming should look, it looks great for a retro style title, and suited the theme well. 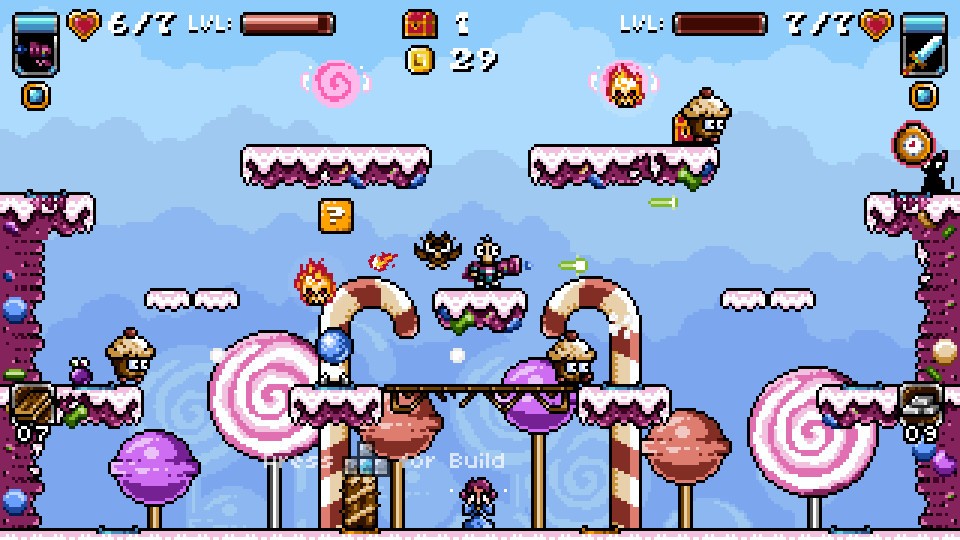 The audio follows suit with a basic 8bit sound track. Crass and simple sound effects play out, and I heard everything that I’d expect to hear from an old school platformer. I was indifferent about the audio, like the graphics it suited the style of game and anything other than what was used would probably have been an overkill, and wouldn’t have worked.

One area that does need to be applauded is the easy to pickup control system. As you begin, a button explanation flashes on the screen and after that it’s plain sailing. This for me is retro gaming personified, because of the ease at which you can pick up a controller and start playing. I doth my cap to the developers in their success in this area of the game.

Platform games are renowned for being tough and having plenty of replay value. If you then blend in RPG elements, you have a recipe for an addictive game that draws you back for more. This is the case with Jet Set Knights, no matter how many times you fail, you always dust yourself off, and try again. The small achievement list is reasonably easy to acquire, so there is little in the way of grinding for would be achievement hunters, and the random nature of the equipment drops helped to keep the action fresh.

For a game that at first glance appears to be light on premise and context, it turned out to be quite in depth and challenging. With a blend of several genres and roguelite elements which causes you to lose all of your progress, there is an awful lot at stake each time you play. I admit that I swore several times, I couldn’t help it, I was invested in saving the princess, and was so close to unlocking the next weapon. Dying was so unfair, but this didn’t stop me from trying again. Do I recommend you play this? Yes, it’s fun, addictive, and can be played casually. Get some friends over, grab your controllers, and save the princess together. Don’t let her down, if you fail the monsters of the underworld will take over.