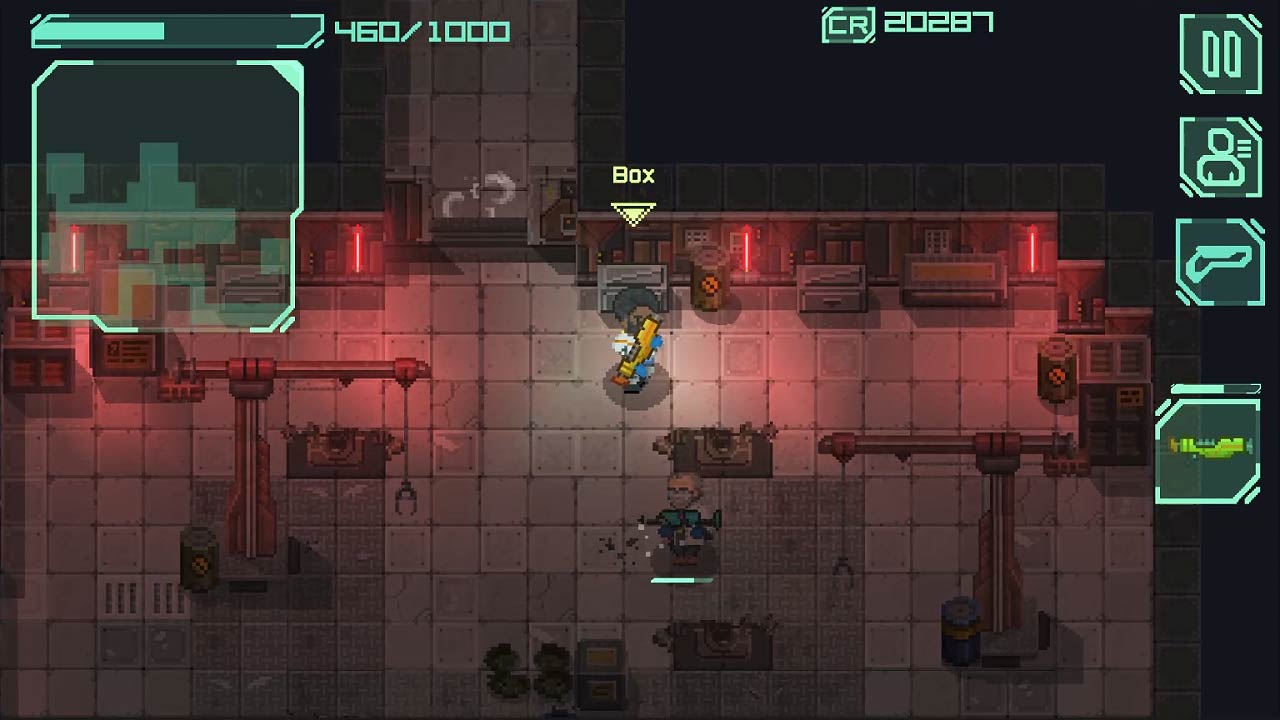 Going in blind when sifting through Nintendo Switch games to review usually goes in one way or another. You find a game you’re like and are willing to share your opinion to help others, whether it’s worth buying, or you pick a turkey that’s bad enough that you have to play it, let alone have to come up with some words to constructively say why it’s so bad. Ivan Panasenko, the developer of Endurance: Space Action can take a breather as his game does not fall into the latter category, and is an enjoyable indie title worth playing on your Switch.

It’s quite surprising that this is a solo effort, as if it wasn’t for the opening title card thanking the dear player for getting his game, I’d never have guessed. It’s a rather polished top-down shooter with a retro aesthetic, but for the purposes of the game rather than a trending title. My first impressions were Alien Breed – a 90s game by Team17, and a game forever on my playlist back in the day. However, Endurance: Space Action is a bit more modern in its appearance in that it’s easier to see what’s on screen, and unlike the comparison title, the story is more engaging, and it’s pretty bloody too.

Set in the future, the crew of a laboratory-based spaceship are all dead – some 2000+, and you’re the only survivor. What did you do!?! There’s blood everywhere, and you’re the only one standing. Apparently, this story covers the events before Ivan’s other game, Ailment, but having not played or heard of it, let’s cover this instead. Three days before this catastrophe, you pick your variation of Sam with base stats of speed, regeneration, etc., and go about your business as a scientist. The controls pop up on the screen which was annoying at first as I’d never have remembered them. However, they’re so brief and so intuitive, you probably wouldn’t have needed them in the first place. 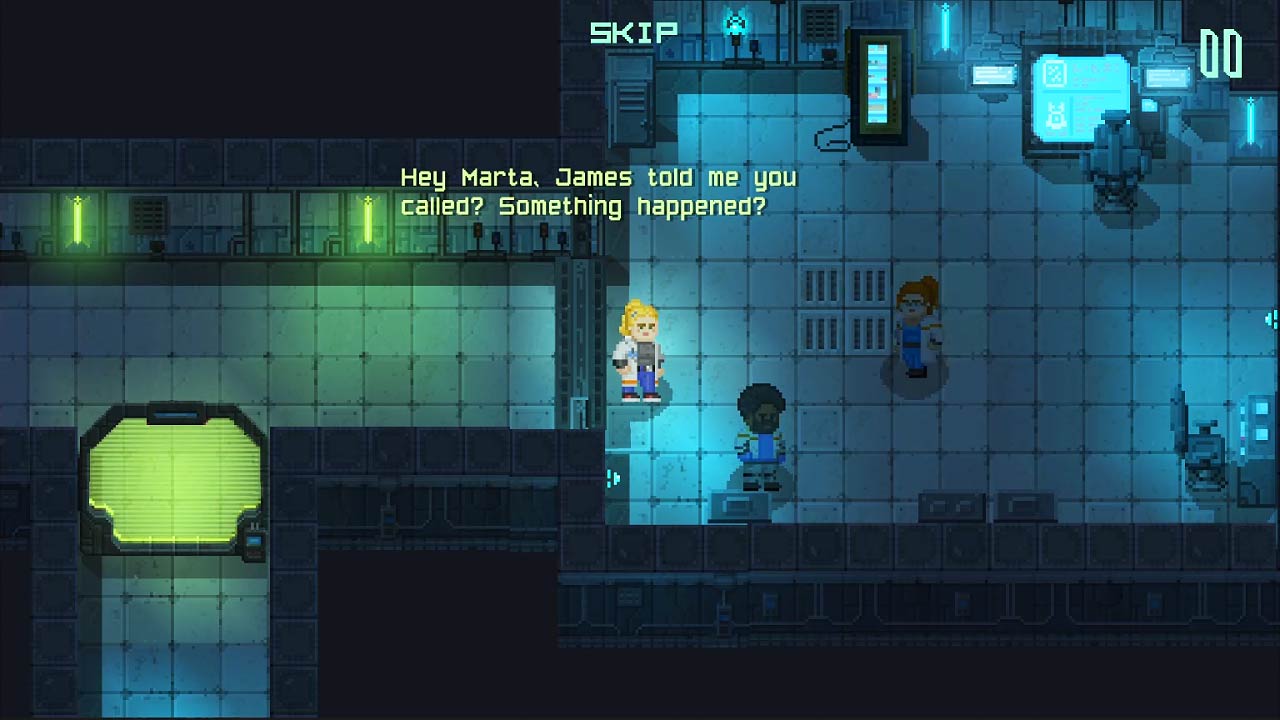 So, the scientists are going about their business when a couple of them start beating each other to death. Fellow pacifists have a turquoise outline to them; the enraged boffs are red. I ignored them at first and let them sort it out between them, but as they attacked me, I retaliated with a few sloppy punches to remove the threat. Relatively easy enough, but before long you’re introduced to gunplay and frankly, can’t live without your arsenal that can be upgraded, i.e. fire rate, through power-ups scattered in interactive lockers and crates.

Through each kill, you’ll earn credits that can be used to upgrade your stats. These range from the speed you move through to regeneration properties; the first is your shield regeneration, the second for health. Understandably, I invested all my credits into health (you can also replenish health if on the verge of dying), but I soon came unstuck with the trap detection perk. Mines are introduced early on, and as long as you aren’t being pursued, they’re easy to avoid, but will later be invisible. You can shoot blindly in the aim to destroy them, but they are a burden if you haven’t invested in trap detection. Stats are represented in percentages, and my trap prowess was 5%, and part of my downfall.

There are three difficulties, and they are represented pretty well based on ability. Still, the bosses are hard-hitting – often with an overpowered weapon with range, or an area covered with traps. They also have a lot of health. If you die, you can respawn at the cost of x credits; otherwise, you’ll restart the level. A little harsh, but an incentive not to dash through like a lunatic. 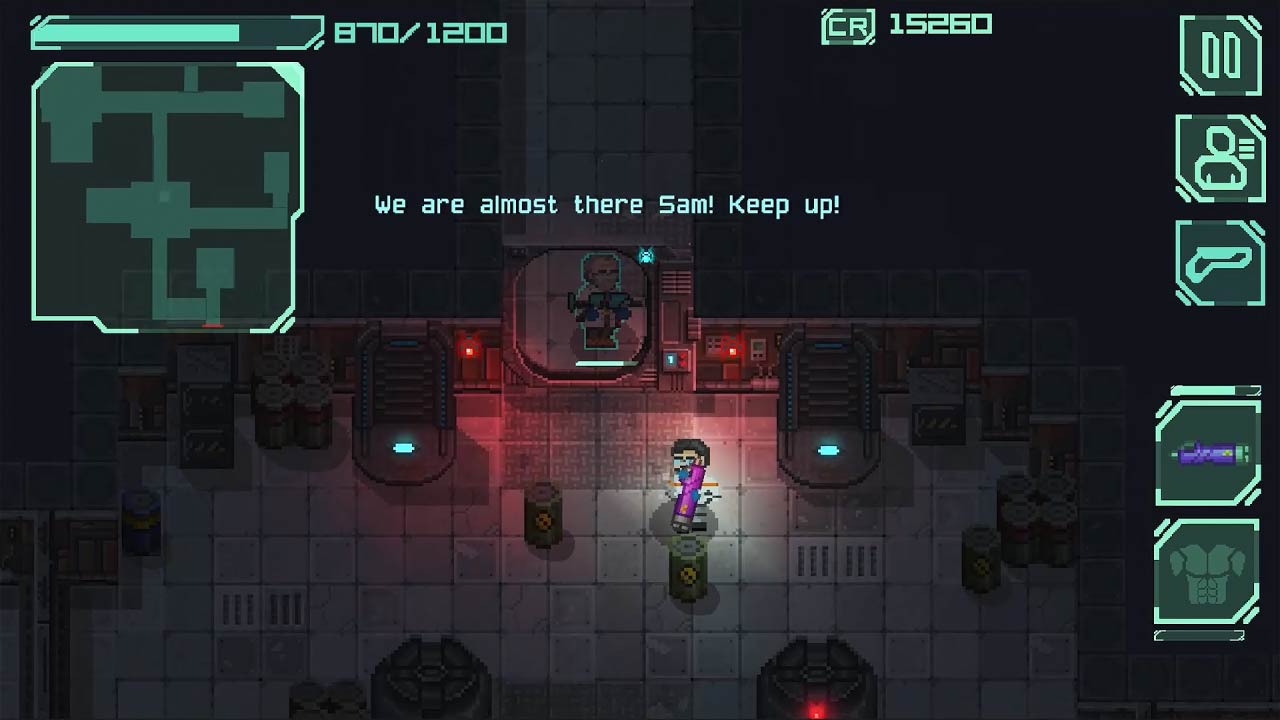 The visuals are great, but the way your character holds a gun is quite clumsy as it rotates on its access, depending on where you’re aiming. But it will not get marked down for that; obviously, it just looked a bit silly. Aiming with the gun is very accurate, and you can shoot in the direction you are moving with the left stick, or independently with the right. The latter is a necessity when you fight the bosses in the levels as you must make use of cover from their overpowered attacks and keep moving.

With regards to the story, it’s pretty engaging and told through in-game cutscenes with text-based dialogue. My only critique is its easy to skip the whole sequence by pressing a rogue button, or perhaps you’ve read a line and intend to skip to the next bit, and before you know it, the NPC has disappeared. Patience is a virtue. As for the rest of the gameplay, it’s a little repetitive in that you need to hit switches to open new areas, but fun nevertheless. Also, you’ll never really get confused on what to do next as objective markers appear on your map and it’s straightforward enough to navigate the ship.

Endurance: Space Action has been a very enjoyable rogue-lite with RPG elements. Though the general premise is quite repetitive, it’s fun, the controls are tight and the dialogue often very witty. It’s a game that feels naturally retro without being forced, and one that’s recommended!