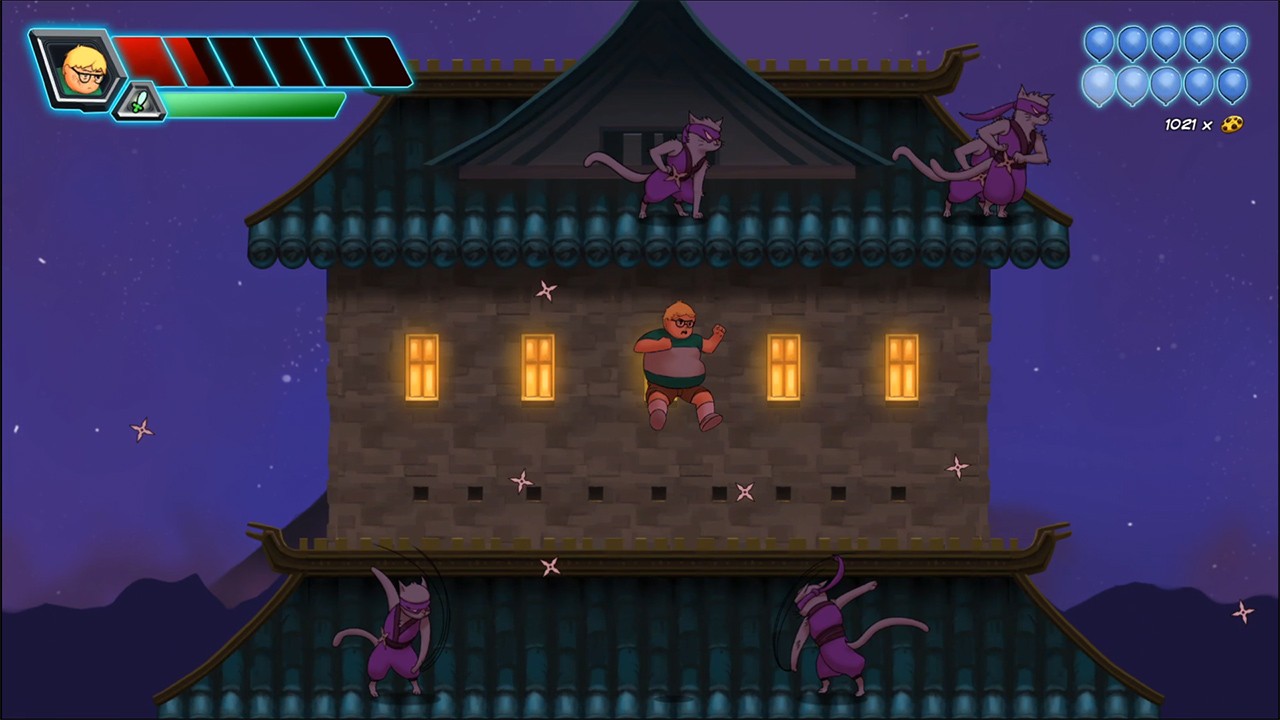 Here’s to the 90s. For those of us who were young adults or at least fully schooled kids, the 90s was the frigging best. The music, the animation, the games and…well, the fashion sucked, but fashion sucks every decade. Go ahead, try to make it seem like there were good points, and all I need to do is point out what every guy was doing to their hair after the OC came out. But games are the perpetual sweet spot, thanks, in large part, to the SNES and the Playstation. We all fondly remember the adventures in 16 bit or early polygons, the time sunk into platformers, RPGs, fighting games and even sports titles that were fantastic (NBA Jam is so damn good). That’s why it’s not surprising that Guin Entertainment LLC took so much of a shine to the 90s in order to craft their new adventure platformer Adventures of Chris. Thankfully, it’s not just a snapshot of a bygone era told through a video game, but rather a filter of the 90s to help sell the magic of the journey to everyone.

The titular Chris is an overweight, video-game loving loner, though not by choice. He doesn’t enjoy going by himself, but he’s gotten used to it. One night, trying to hurry home after dark, he inexplicably gets sucked into a portal to a different part of the world, because some evil brat named Count Junior really, really wants to join the league of evil baddies. This punk thinks that kidnapping kids to hold hostage at his birthday party is a surefire way to be accepted into the halls of Evil, and, spoiler, it isn’t. Still, instead of setting the hostages free, the evil dingus turns them all into different kinds of toys and sends them to evil lairs across the world, and turns Chris himself into a balloon. This is because the evil dude didn’t want a fat kid at his party so he makes Chris a balloon, because cruelty. Chris escapes and floats up to the skies, but finds he can safely hide amongst the clouds. Shortly, he discovers a race of balloon beings that has lived in the skies, because why not, and Chris learns to both deflate himself and that he might meet the parameters for the Legendary Hero™ that we all wait for. But Chris isn’t automatically there yet: he’ll have to grow and strengthen as both a potential protagonist and as a general dude before he’s ready to save the world.

Adventures of Chris is a whole lot of game in one, but the primary approach is a multipath adventure platformer with a healthy dose of action. Chris needs to go out to both find new powers to make himself a more formidable hero, but also rescue the different kids who’ve been scattered across the land. Each kid is in the lair of some great Big Bad, and each is elementally different, because of course they are. You’ve got spooky castles, icy terrains, a jungle because why not, and all the rest. Chris then needs to fight through some decent lengthy areas which are a mix of straightforward run and gun with occasional metrovania-style exploration and discovery. There are hordes of enemies along the way of all shapes and sizes, from the appropriately typical henchmen of evil bats and spiders to the more obtuse and bizarre, like anthropomorphic animal ninjas, angry snowmen and other unique surprises. There are big bosses to deal with, and Chris has to approach the whole situation from a very different perspective, because he’s pretty aware he doesn’t look like the typical hero, but is still trying to step up to the plate. 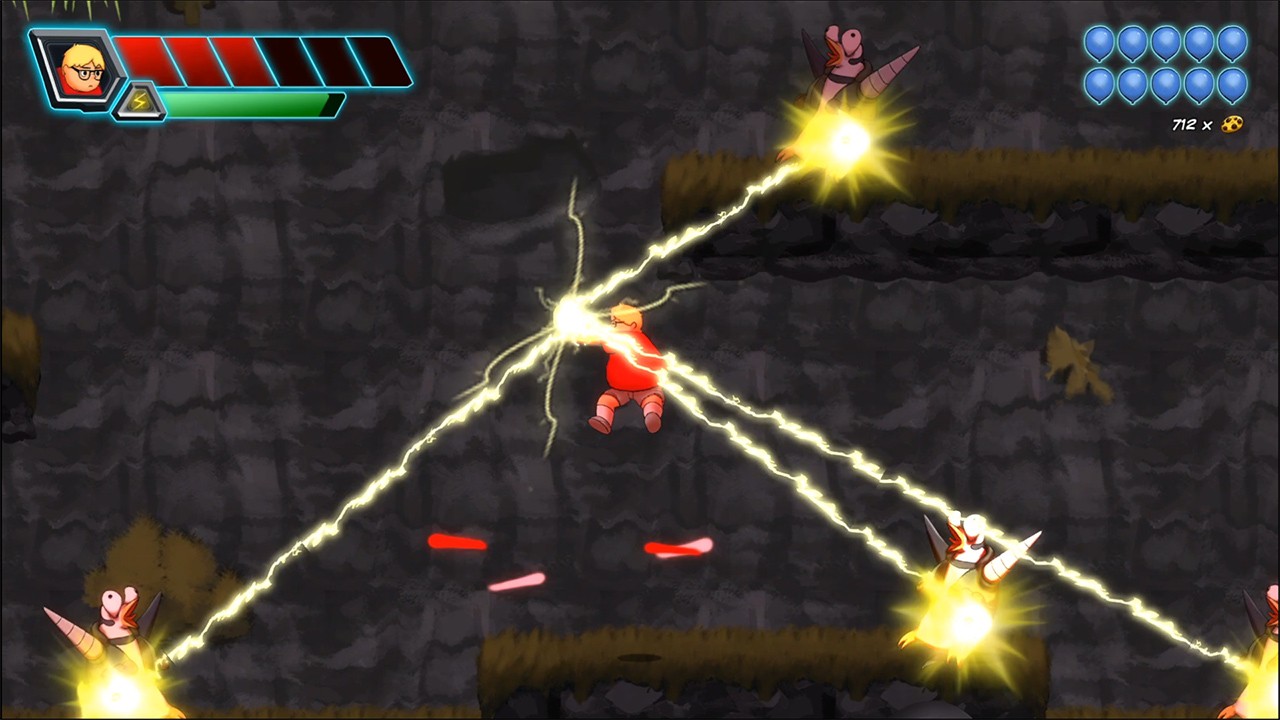 Chris, as a protagonist, handles fantastically and has a sweet set of moves as he progresses and upgrades. The initial movement system is really special and different, and it’s something you need to get the hang of but benefit greatly from understanding. You have this latent ability to inflate and deflate like a balloon, with the caveat that you need to touch ground between inflations to “recharge.” The further you get, the more upgrades you can purchase to adjust your air multiple times without resetting, which can create some sweet combinations of movement through some devious and difficult areas. You have to learn how to use this in a variety of ways, as the outside-the-box thinking results in levels where you need to consider the level and then also the inverse, given that the ceiling is just as important as the floor. This balloon ability also manifests and changes as you find more power-ups, such as adding a gradual float-fall that gives you better directional control in some locations.

Chris also gets a ton of extra action moves as he grows stronger, adding elemental damage to his initial punch (you can pick up two different attacks before even officially setting out on your quest). He’ll be able to add some magic, some extra weapons, and even get his feet into the mix with enough proper training. Believe it or not, Chris’ arsenal expands to some truly magnificent ideas, and all of them get utilized in turn as you progress further and further into the game. While you’ll probably settle on specific attacks that you like best (Thunder Punch and Super Bounce for me), you still need to figure out which work best for which enemies and bosses, particularly as you get further towards the end.

From a purely gameplay layout, Adventures of Chris is a fantastic voyage that ticks some much needed boxes to explore the nostalgic ideology of the 90s. The open map and choices make this the sort of trial-and-error situation that reminds me of Mega Man: you can technically play the levels in any order, but doing a specific one will lead to the best results and fastest times. You’ll want to explore and re-explore (maybe on a higher difficulty) to find all the flags that are scattered about and to access areas that you can’t normally get to until a new ability has been unlocked. You won’t need to set the difficulty higher: you can do easy mode, but nothing will be achieved in the game’s main menu (including the new game modes), and the unnecessarily hard mode (amazing name) is just there for the challenge: there’s no reward other than feeling good about yourself. The normal difficulty is the perfect mix of enemy density, available rewards and number of cookies (cookies are the currency used to buy upgrades and such). 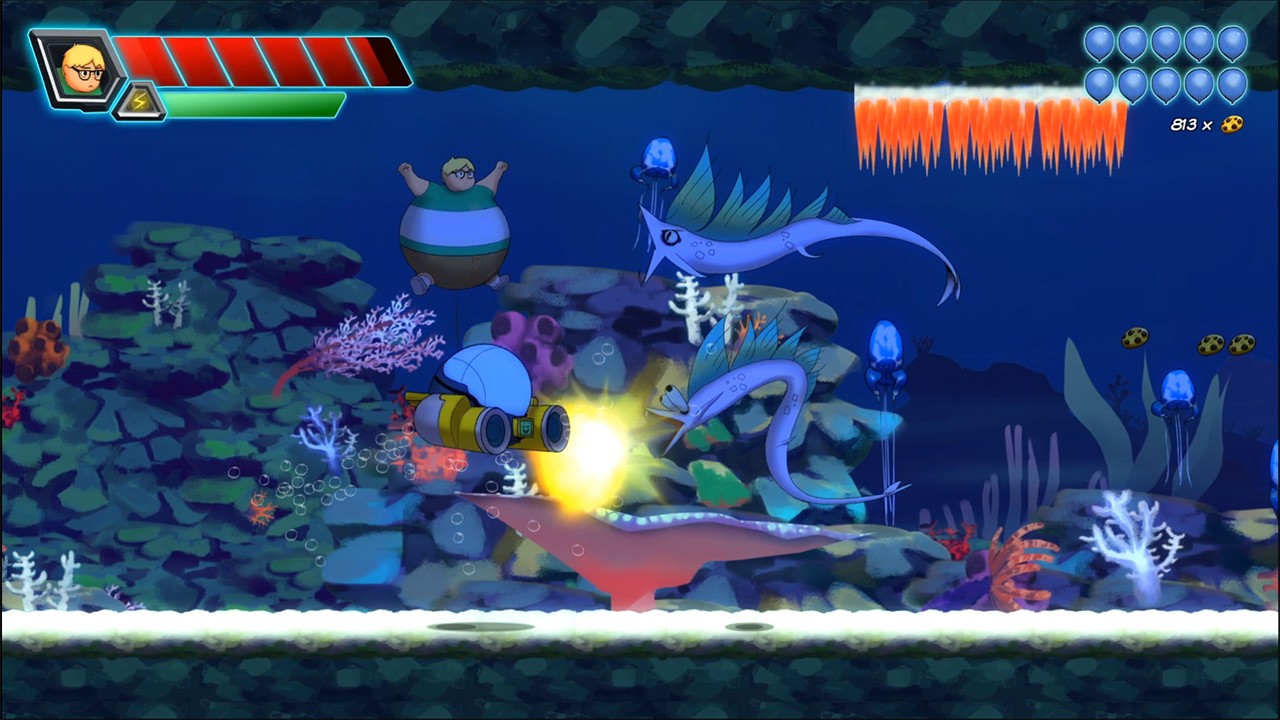 Beyond that, Adventures of Chris also has so many endearing qualities that pushes it beyond just a nod to the decade of gaming. The animation points are firmly 21st century and really cool to behold: I was actually a bit taken aback the first time the portal animation was used to transport our hero. The minor enemy motions are always welcome, particularly the stomping hissy fits of Count Junior. There’s enough of a nod to how the games of the 90s looked without cementing itself in the pixel art or limited frames that 16 bit entailed. Instead, everything is very up to date, modern and colour saturated, allowing it to slip past the prejudices of “old looking games” and allow it to float freely in the current ecosystem of decent and strong platforming.

But also, the game just feels fun in the same aspect. The enemies are hard, but cartoonish and, as such, there’s no terror or frustration that comes through. The moments of exposition and dialogue between Chris and the other characters (both helpful and unhelpful) are peppered with humanity and hilarity. I love that most of the kids that Chris rescues don’t fixate on his weight, allowing us to see Chris’ own personal view of himself and also to properly target the bad guys as “bad guys” because they do constantly mention he’s chubby. It’s good writing that keeps a game that doesn’t NEED a story even more engaging because the story is likeable.

Adventures of Chris wasn’t a title I was aware of until I stumbled across it, and I’m glad that I found it. Too often, homage and pastiche titles draw far too heavily from the appearance of the software of yesteryear and not the spirit. Adventures of Chris, in sharp contrast, uses as many contemporary tools as it can while maintaining the shape and form of the games that used to occupy my weekends throughout my childhood. I’m looking forward to going back and seeing if there are even more efficient ways to run through the game in the future, and I’m certain that the right players will gravitate towards this endearing and enjoyable adventure across all platforms.

So rarely has a game been properly cobbled together that I didn’t find myself complaining about the underwater level once.