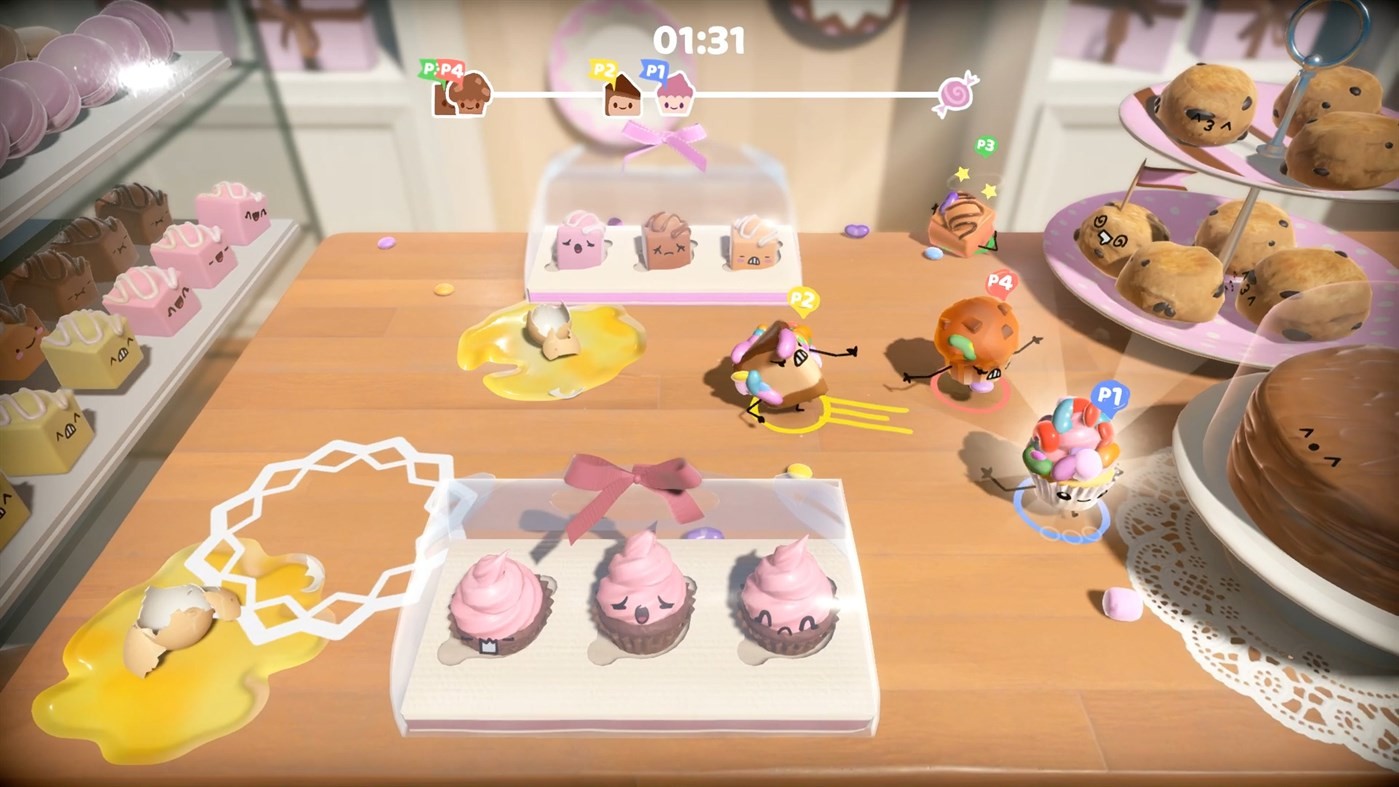 In a world of uncertainty, destruction and no light at the end of the tunnel, there is always one thing that can make a human smile and that surely has to be cake, right? I mean, who doesn’t like cake in some form or another? Even the most hardcore vegans amongst us will find a way of devouring it. Having been a Baker for 12 years in a previous job role myself and my partner being pretty much a professional and connoisseur in the world of cupcakes, I naturally intrigued and compelled to give new indie title Cake Bash my full time and attention.

Cake Bash is developed by High Tea Frog and published by Coatsink and launches on 15th October 2020 on Steam, Xbox One, Playstation 4, Nintendo Switch and Google Stadia. Cake Bash will also be available and compatible to take across to the next generation on Xbox Series S/X and Playstation 5.

Now I’m sure I’m not alone in saying there is a distinct lack of 4 player couch party titles available on the market these days. I constantly have people asking me what they can play with their families and kids, so it was exciting to learn that Cake Bash labels itself as a frantic four player party game where you must fight to become the tastiest cake! This is one of the first games since the Overcooked games where I’d actually planned to get the family around to play this together and trust me, you’ll want to play this with people as it is absolutely fantastic fun. 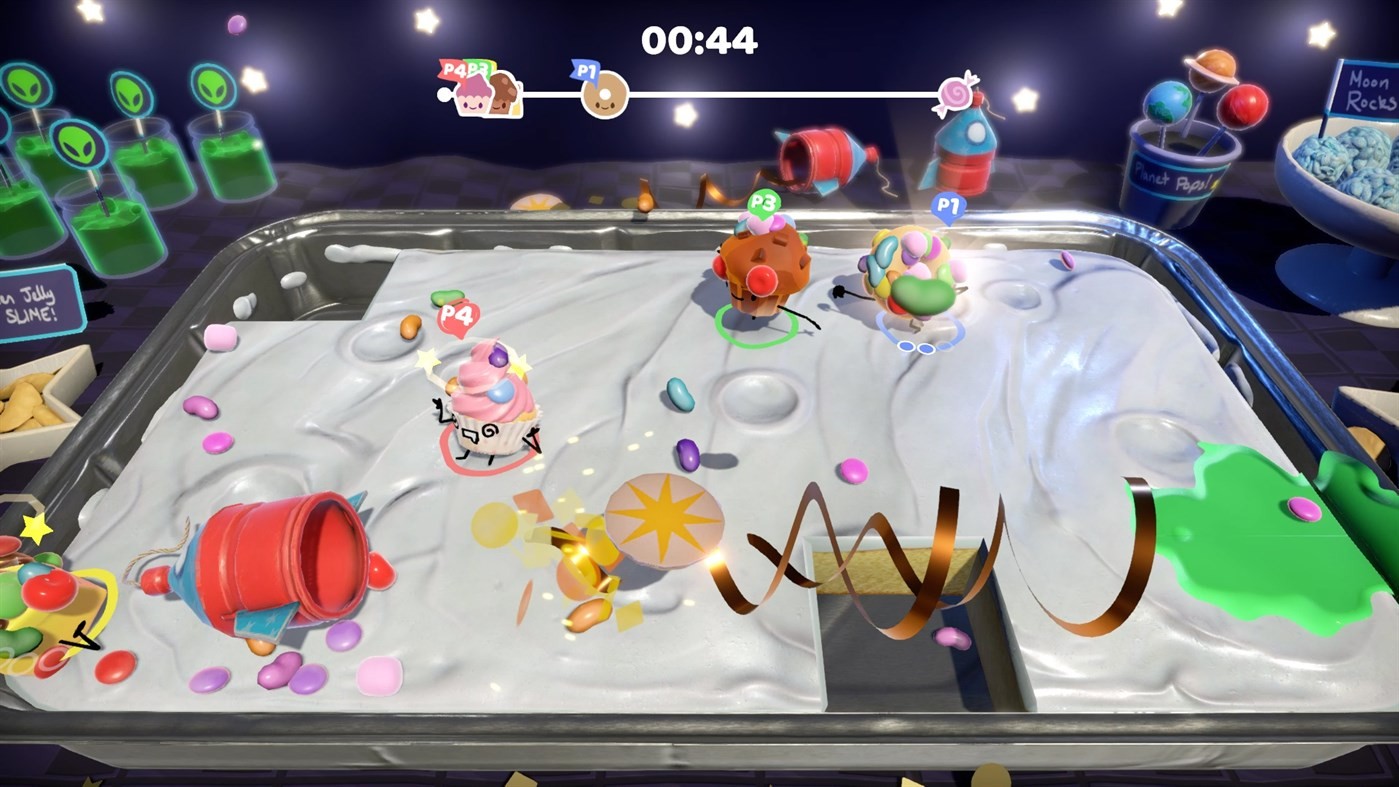 Cake Bash gives you the choice of playing alone or with up to four of you with the option of filling vacant slots with AI players. You’ll instantly be greeted with the Get Tasty mode, which drives you through a series of mini games, some of which last around the two minute mark and others are last man standing type experiences. You can absolutely play this with anyone of casual ability and age, I played this with my 3-year-old son on my lap and he absolutely was drawn to the art style and the fact that cakes were beating each other up. Relax guys, it’s not GTA! But on a more serious level, the opening screen reveals some seriously stunning art and colours. I warmed to the visuals as even though I was fixated on what my character was doing, you can’t help but admire the details surrounding the absolute carnage that you’re about to endure. It reminds me somewhat of the Micro Machines era in a way where you’re on a tabletop and the elements of the table are in the background.

The control system is very simplistic here, using the analogue sticks to navigate around the surface of the tabletop. The X button is used to beat your opponents to a pulp and you can even charge up your punch to expel a much harder hit, B button allows you to use a limited dash to escape danger points during a match and the A button allows you to pick up items such as screwdrivers and lollipops and smack the other players right across their buttercream face. It isn’t just all about the cake though, you can even choose to be a chocolate eclair, French fancy or a donut, there is no baked goods discrimination in Cake Bash..

There are several mini games available during your playthrough, one example is a game where sweets fall from above and you have to coat your baked item in as many sweets as possible. The more sweets you have stuck to your body, the better chance you have of winning the match. As you can imagine, it becomes utter chaos when four of you are running around on screen coating yourself in candy whilst punching each other to knock the sweets free or dashing across the table to take a swipe with a giant lollipop. 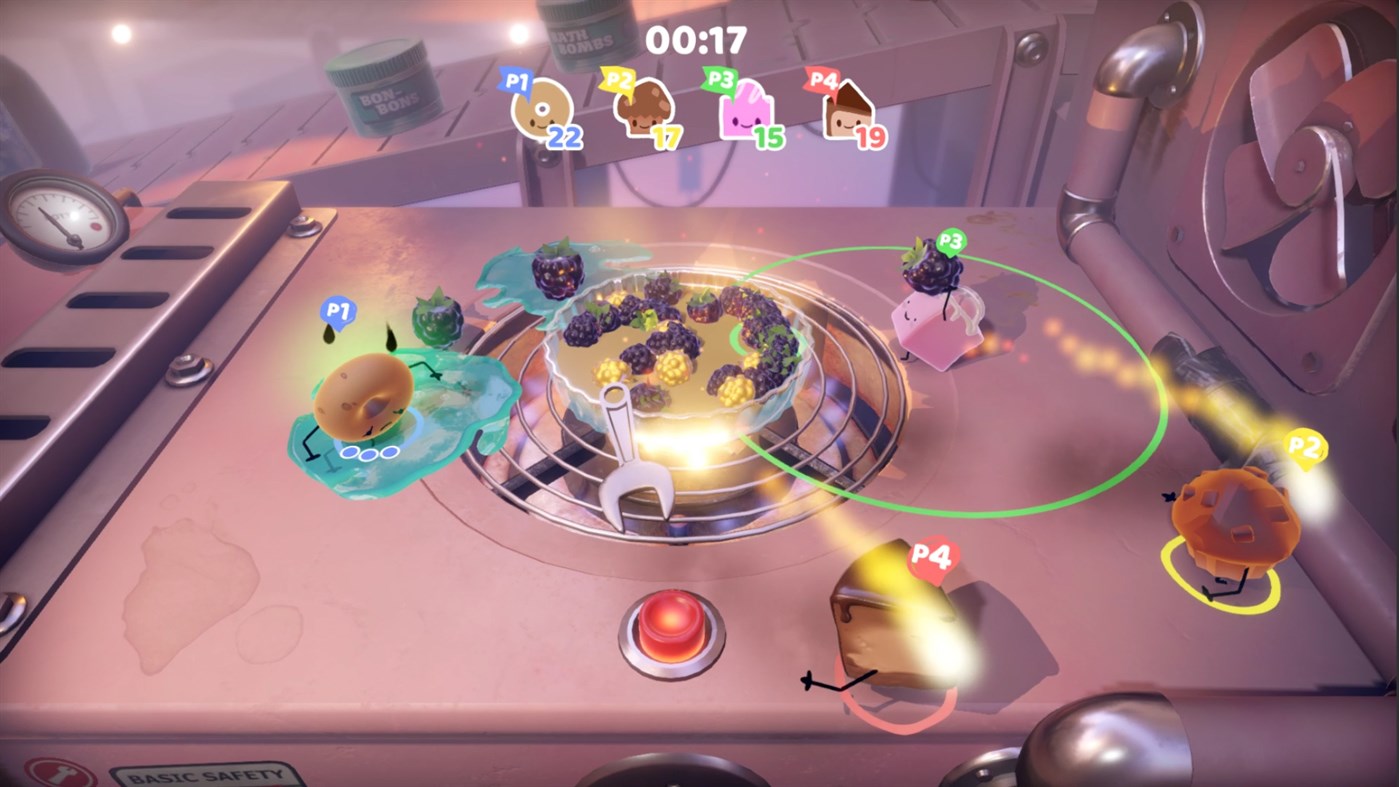 Another mode that sticks in my mind was the objective of holding a sparkler for as long as possible, this really puts the pressure on as three demented cakes chasing you around the table has you on the edge of your seat. I’ve not laughed so much during a game with a family where you are literally shouting each other off for smacking the sparkler out of your hand. It is incredible mindless fun and I could list all the game modes here, but I’d like to leave some of them a surprise to newcomers.

The mechanics work really well and not only will you be fighting to become the king don of cake, but obstructions appear in some modes. Such as a fan blowing you from one end of the table to the other, or a plastic container coming to crash down right on top of you. Whilst these factors are frustrating when you’re in the lead, the game wouldn’t work without the element of surprise. The gameplay is fluid and smooth and everyone appears to feel like they have the chance to win each round, which makes for super competitiveness.

Between the rounds you’ll earn coins which will give you the opportunity to purchase toppings for your cake. Remember this is for your podium finish at the end of all the rounds and that what you purchase will allow you to gain bonus points regardless of your performance within the mini games you take part in. It is essential to manage what you buy at this point, as the best topped cake at the end will be the winner. I do think this is a nice balance as it doesn’t give experienced gamers the opportunity to dominate every round and own their little brother or sister at the game, or your mother who doesn’t understand which button performs which action.

There are unlockable items along the way, such as cosmetics for the cake characters, access to the game modes in a quick play mode and more. There is an option to play this game online with players across the world, however, at the time of writing the game hadn’t launched so I could not test this feature but I believe it will add serious longevity to the title. What I felt a lack of though was the overall content in terms of the levels and modes. Whilst there is plenty to start off a newcomer with, it becomes a bit stale over a period of time. I’d love to see more expansion to this game so that it kept appealing to an already built user base to keep coming back more.

Overall, my intrigue for Cake Bash evolved into surprise as I genuinely didn’t expect the game to grip me as much as it did. It brought my family together for some togetherness, laughs and great excitement and fun. There is something for every age group here and for me personally it was great to escape normality and the triple A titles to try Cake Bash and I am glad I did. Whilst I would love to see more additional content in the future, I am not sure that the number of modes on Cake Bash will keep people occupied for the long term but the added option of online multiplayer may draw players in for longer. For the short term, it is a beautifully illustrated 4 player couch party game that is easy to pick up and play even for the most amateur of gamers. If you’re one of the ones screaming out for same screen fun with friends and family, then absolutely you should add Cake Bash to your collection without hesitation, I know the next time I play video games with my family what I’ll be loading up and this is the fantastic Cake Bash.

Cake Bash is a beautifully illustrated four player party game experience which will guarantee laughs, extreme levels of fun and the craving to go and eat some cake!