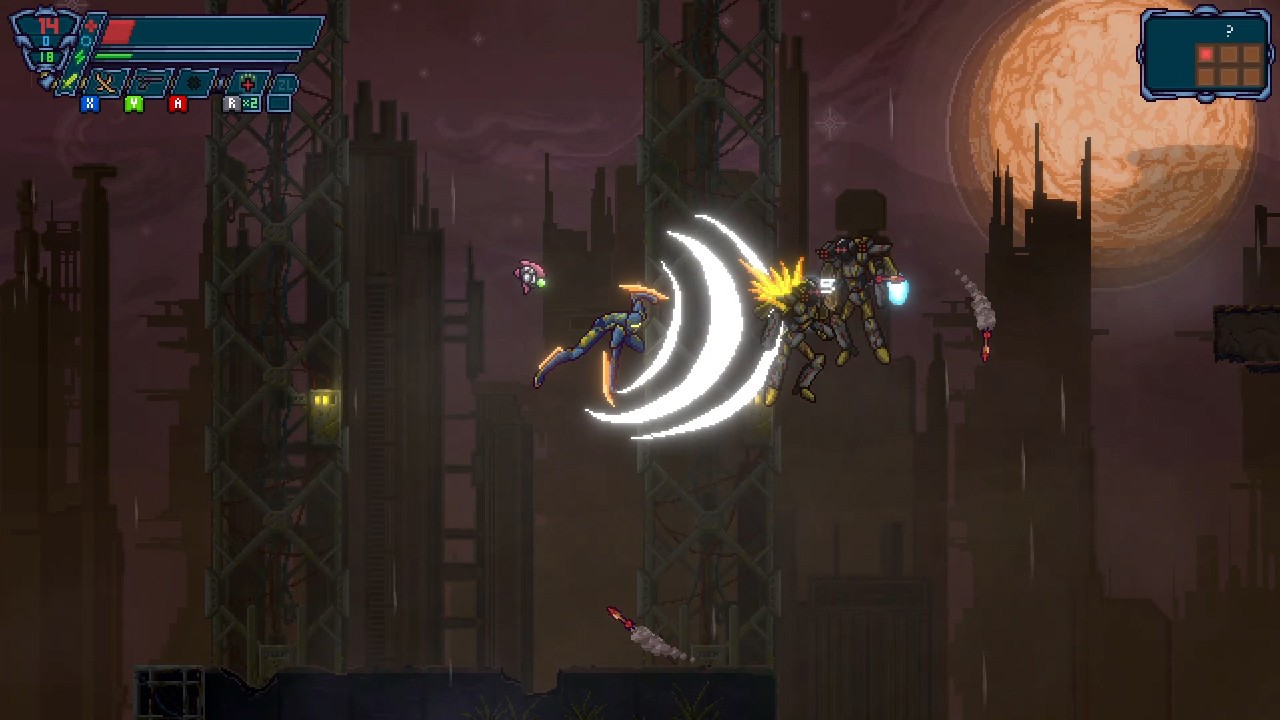 After having experienced several Metroidvanian’s throughout my gaming “career”, I consider myself relatively a well-informed person about this subgenre created by the mix of Metroid and Castlevania. I really came across MindSeize through a friend who told me very well about the game, its history and overall gameplay. His praise was so great that I was convinced by his insistence that I should be trying it. MindSeize arrived on the PC a few months ago, and was later also released on the Nintendo platform. At first look, I must confess that there was a certain prejudice on my part because of its visuals, which appears to be somewhat amateurish due to the strange proportions the characters have and their aspects that differ from the in-game 16-bit graphics to that presented in cutscenes.

Throwing away this silly thought that I had initially, I decided to venture myself into this sci-fi universe even with the look of being something with which I had contact before through a lot of games of the platform genre with puzzle elements. The plot tells us about M.C., a character who is investigating an organization called The Ascended, which aims to place the minds of human beings in non-biological bodies. However, due to a mistake, M.C. ends up being discovered and has the mind of his dear daughter kidnapped. As a punishment, the character ends up suffering consequences that put him in a wheelchair. After it, an old friend of yours and captain of a group of bounty hunters offers help to go after those who have her daughter’s mind. Then M.C. manages to put his mind on an exoskeleton and go in search of recovering what he wants. 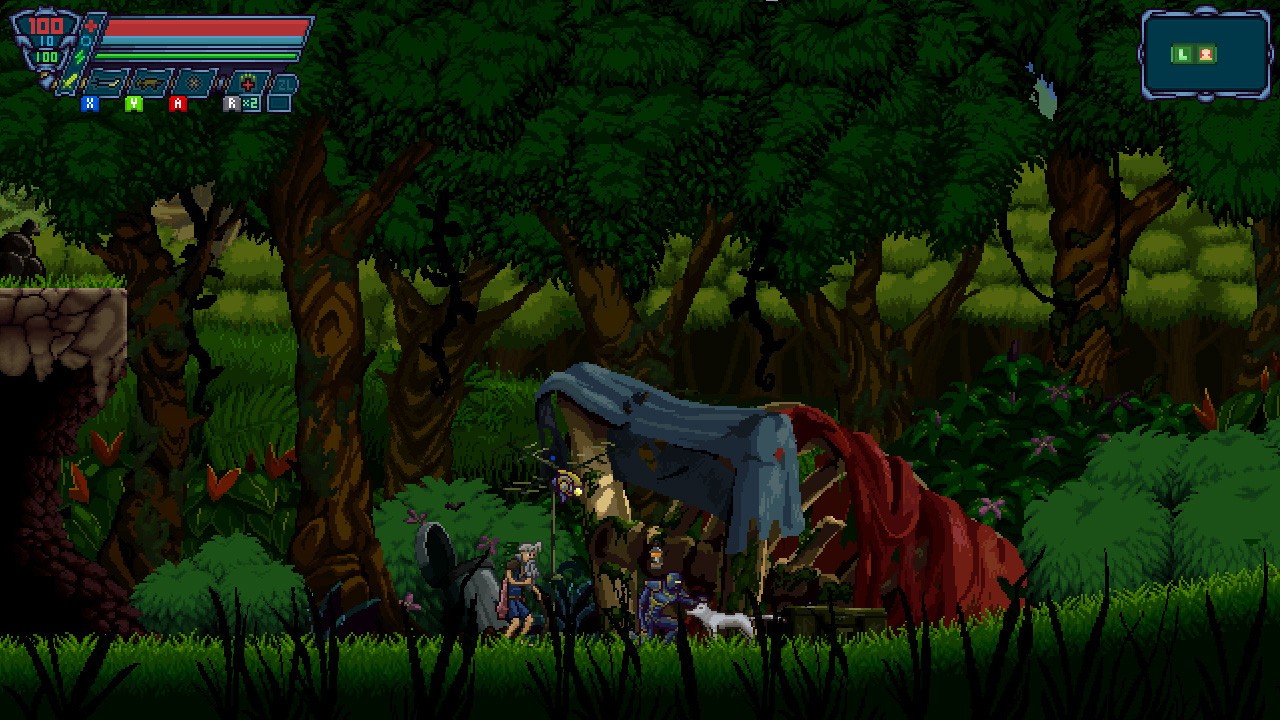 Structurally, MindSeize follows the pattern of games of this subgenre: confined environments, enemies that respawn when gotten out of sight, purchasable upgrades, exploration, skills earning, puzzles and some superficial interactions with NPCs. It’s as if the game really did its homework right and put all the elements of a cake recipe in the final product, resulting in a pleasant experience and challenges in the right measure. The battles have a fast pace that hooked very quickly, offering upgradeable melee and long-ranged attacks that gave me the feeling of complete control and a power sensation. Boss fights follow a good cliché that also keeps the challenge at satisfactory levels, and always requires the recognition of their patterns to win the fight. In terms of gameplay, MindSeize is a very good game, and much better than many of its competitors, which surprised me and put aside the initial prejudice I got. MindSeize also shines through its very well made soundtrack and convincing sound effects that add a lot to the sci-fi theme.

However, not everything is pleasant, and MindSeize flaws a lot in terms of presentation. Dialogues are poor and very superficial in every way, new skills are simply acquired by finding items positioned in certain locations in the scenarios without any plausible reason, interactions with NPCs are just “ok” and do not convey any feeling of empathy with the game in general, among other minor game design flaws. Perhaps one of the biggest annoyances for some will certainly be the lack of clues as to where the next objective is, so I cannot say that MindSeize is the type of game that takes the player by the hand and points you a direction. If you like to discover things by yourself, great. Otherwise, this isn’t the type of game I can recommend you. Exploration is fun, especially after acquiring all the skills to reach locations that were previously impossible to reach – again, classic formula of the Metroidvanias – but the feeling of getting lost several times is inevitable. 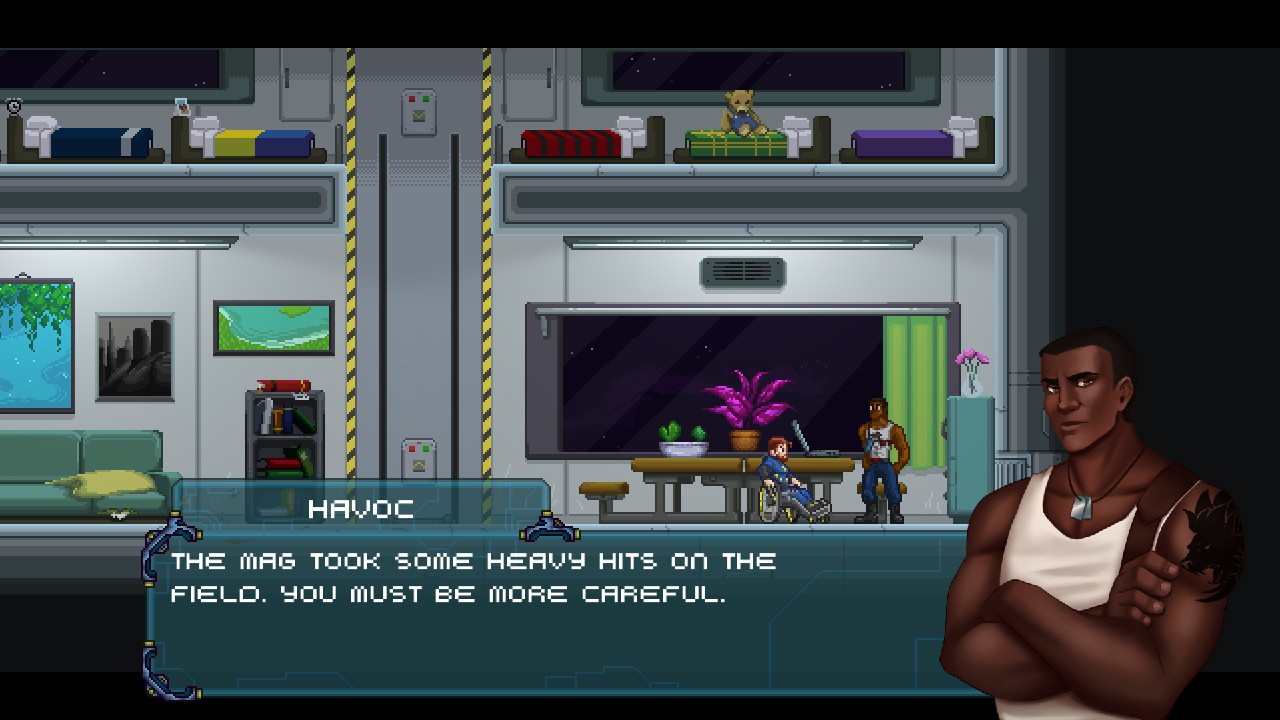 Unfortunately, truth be told: the game has bugs that you must avoid if you want to progress, and this has happened since its launch. It seems that with each update a problem is fixed while a new one appears. You can easily find reports of people over the internet who couldn’t manage to finish MindSeize due to freezing problems, controls that stopped responding, among other issues. And sadly that was my situation. MindSeize prevented me from progressing and continuing to play, and I waited for several days for an update to fix the problem, but nothing has been resolved so far.

Despite that, MindSeize was a really fun experience for me until the moment where it was possible to progress, so all I can do is to expect good news from the developers. Unfortunately, this kind of stuff is very critical and a deal-breaker when it comes to deciding on whether or not to buy a product, so be warned! In addition to the story mode, it’s possible to unlock battles against bosses already beaten. Also there’s a Boss-rush mode that is unlocked once the campaign is finished – if the game gets fixed, obviously.

MindSeize is a really fun experience for Metroidvania fans, even not presenting anything new and trusting in several clichés of this subgenre. Unfortunately, the game has bugs that prevent you to progress, and this happens since its launch.