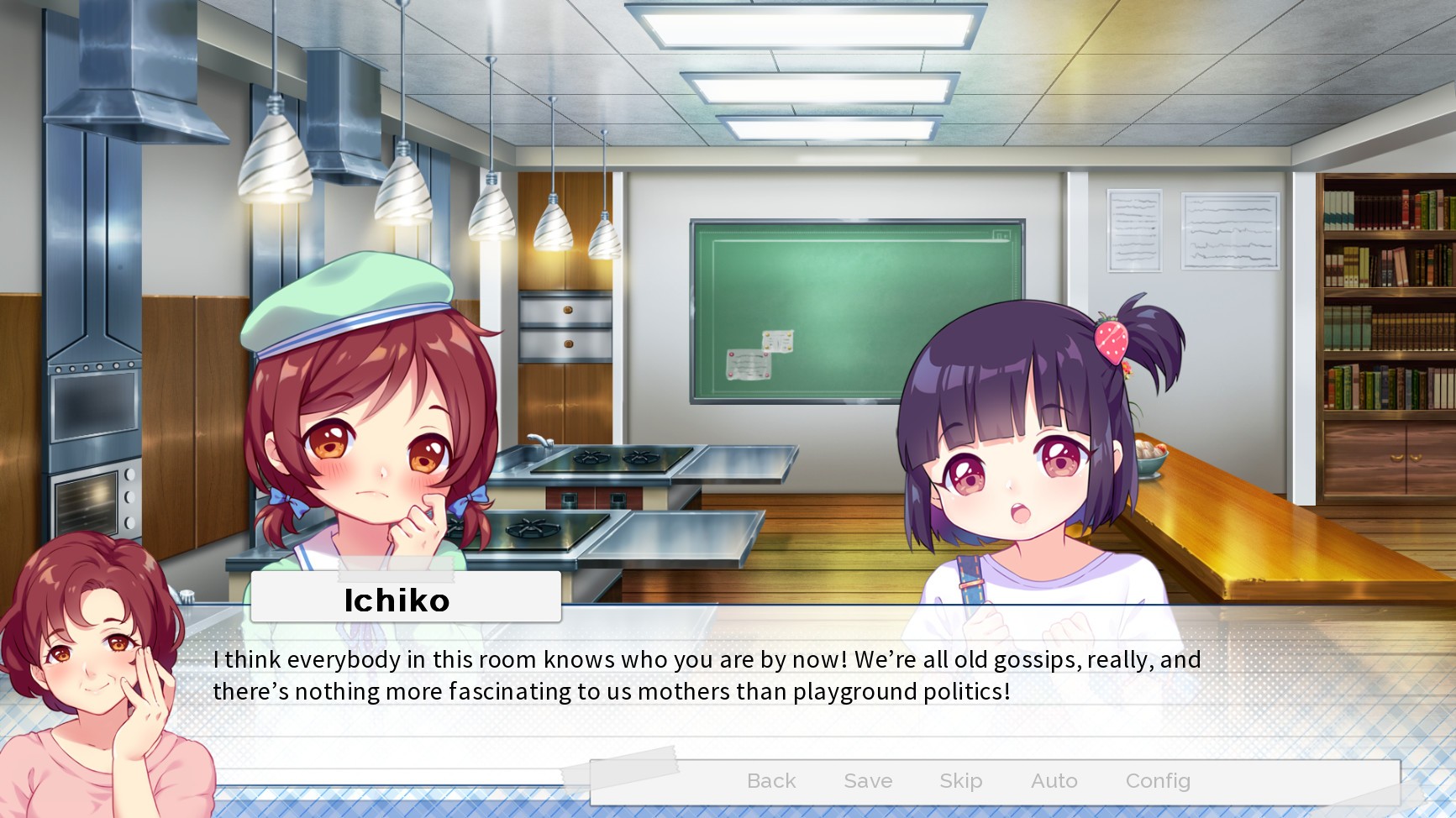 There’s something about romance visual novel style titles that has always intrigued me. Why do we play them? Hardly encapsulating epic narratives or terribly complex themes, these quiet visual novels rarely scratch the surface of video game excellence without doing something outside the traditionally understood boundaries of the genre and art-form. The Language of Love took several days for me to grapple with, taking short breaks in between to really appreciate the story it was trying to tell. Without several mainstay features of the form, this VN made way for a very different game-based experience.

Following the rather rigid structure of the plot of The Language of Love, the player will read rather than play the story of the game. This plot centres around three main characters. Mitsuki is twenty-three and a later-in-life student working towards University entrance exams. Kyouko is a young single mother who works at a family chain-restaurant and becomes Mitsuki’s love interest. And finally Tama, Kyouko’s young and impressionable daughter (and by far the stand out character of the visual novel). The two adult characters are both outcasts who live lonely, uneventful lives who meet by chance through Tama and them living in the same building a few doors from each other. The plot continues as they become further intertwined in one another’s lives. Unlike other visual novels I have encountered over the years, The Language of Love has one clear narrative. There is no agency for the player and they are forced to simply watch the events of the story unfold without any input. The lack of narrative choice and potential endings really detracted from the story. While I was able to relax while enjoying this experience, I was made unsettled by how detached I felt about the game. The lack of stakes meant that I as the player was less invested in the characters and their ending. 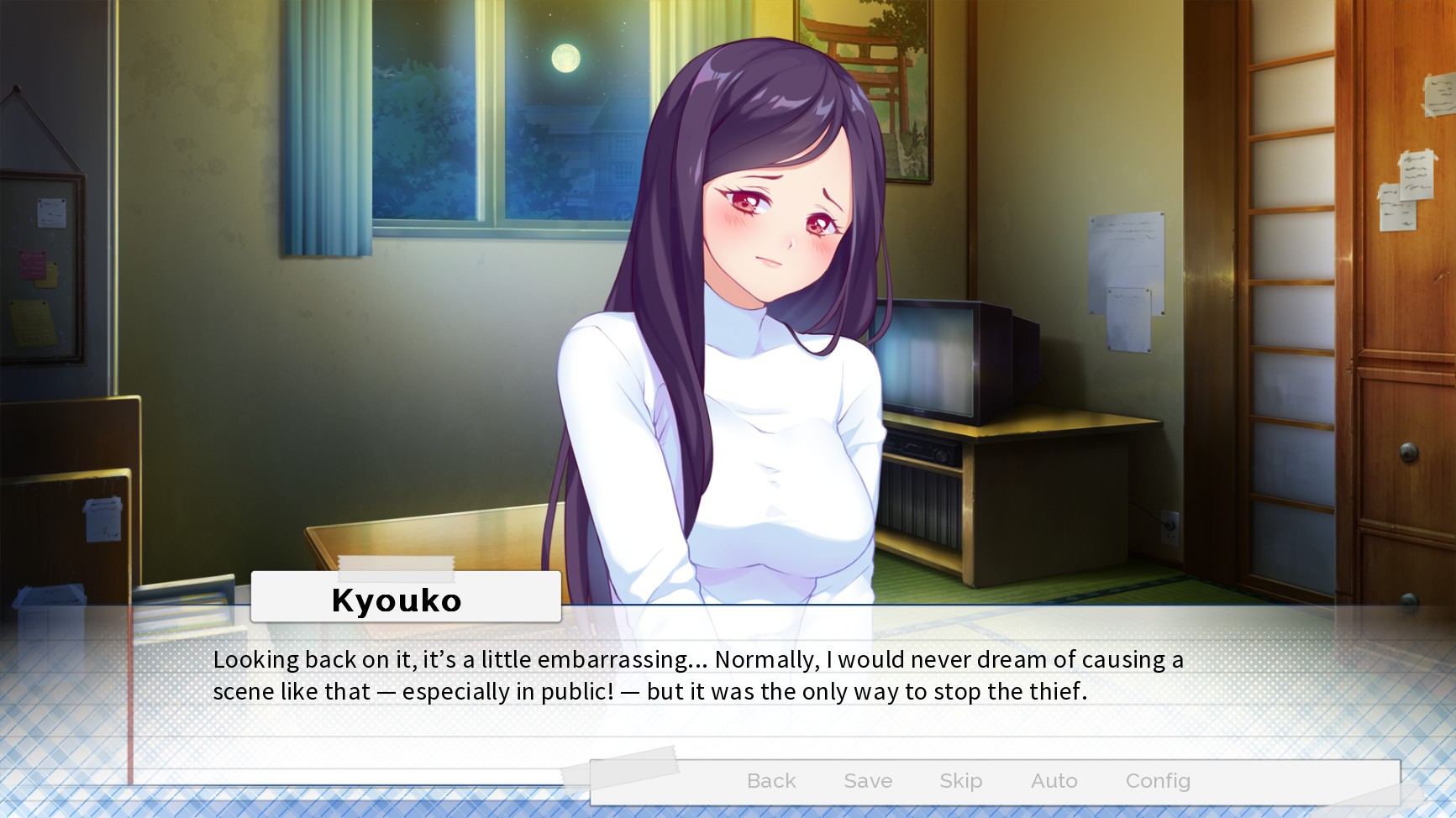 While well written, the narrative of this story felt unsuitable for an interactive medium. This move to more passive experiences on games consoles has a clear trajectory, but I was disappointed by this title. While visual novels offer the option of a ‘choose your own adventure’ story, this sort of experience as demonstrated in The Language of love pushes the boundaries a bit too far for this reviewer. While I loved the characterisation, especially of Tama who was possibly the best written character I have read in a long time, its complexity and refreshing quality is dimmed in the predictable plot and forced complacency on the part of the player.
The length of this story, giving you approximately five ish hours of play time, makes this quite a meaty narrative. At times it felt dense, and at other times it reads as light as a feather. This variation in tone and energy provided a decent tone.

This was matched by the art-style and music, which had a simple yet classic quality to them. Everything about the design felt deliberate. From the characters who were just as personalised by their artwork as their dialogue, to the background art and user interface design which helped shape the narrative and set the pace, you could really get a sense of where the developers at Ebi-Hime wanted this narrative to go. The sometimes-simple art was really set off however by the music of the visual novel. The soundtrack moved from energetic to mellow and tender and really helped reflect the current scene it matched. Sometimes this was a little on the nose, although this is only a small criticism of the overall artistic direction of The Language of love.

It is hard to compare this to many visual novels due to its lack of choice and fixed narrative. However, if you are a fan of Katawa Shoujo and other such visual novels which restrict the choice of the player to a minimum, then The Language of Love might be a title you could pick up. Personally, I wouldn’t pick it up again. To replay this again would be too much of deja-vu. A second run provides little more than a repeat of the experience. I wouldn’t return to The Language of Love but if you prefer screen-reading to page reading, this one is a solid ‘sure, go ahead’.

A solid meh. The Language of Love is about average in quality for a Visual Novel and not quite worth the price.