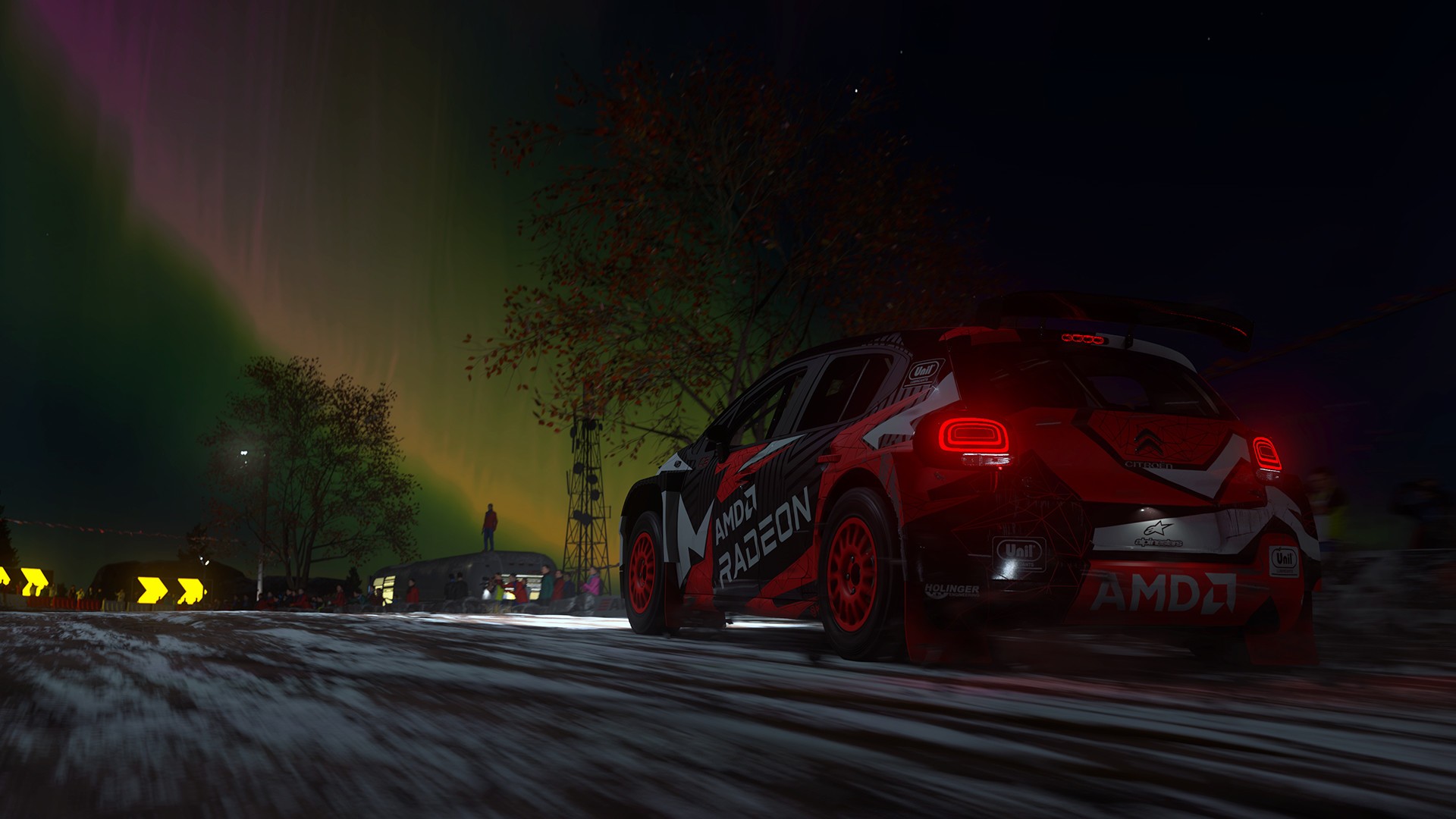 With a new generation upon us with the Xbox Series S/X and Playstation 5 it wouldn’t feel normal to not have a racing game amongst the launch lineup of games. With the big hitters Forza and Gran Turismo seemingly absent and still in development for their respective platforms, Dirt 5 by Codemasters comes to the rescue for all the fans of track and circuit racing. Now Codemasters have been chucking out Dirt games for years and they have been consistently great titles, so you may be thinking of what is different for this instalment compared with the last which was Dirt 4 three long years ago. Keep reading and all shall be revealed!

I was lucky enough to get hands on with Dirt 5 earlier this year when I played on the new mode playgrounds which I will touch on later in the review. Naturally, I was intrigued to see what I hadn’t played and whether there had been improvements since my run with it previously. It is important to clear up early on in this review that the title will be available on current generation across PC, Xbox One/S/X and Playstation 4 and is already available. However, if you choose to purchase on this current generation you will be able to transform your copy of Dirt 5 for absolutely no extra cost, Playstation 5 will be an upgraded version, whereas Xbox Series S/X use a feature known as Smart Delivery to take it to the next gen copy. Dirt 5 is set to achieve 120fps at 4k resolution on the next generation consoles and whilst I haven’t been able to experience this at first hand myself, I am looking forward to seeing the game pumped full of visual steroids and gracing my eyes with fresh smooth goodness!

As soon as you boot up Dirt 5 you’ll be graced with vibrant colours and clean and easy to follow menus with impressive art and graphics to fill the gap where the game loads. Now if you’re a Dirt series fan then you’ll more than likely feel that the previous few games have been heavily focused on the pure rally experience of driving. Dirt 5 pulls away from this ever so slightly by showing attention to every all off road driving experiences.

The main menu gives you some choices which are Career, Online, Arcade and Playgrounds with your garage and profile finishing off these selections. Delving into profile first of all gives you the ability to customise cosmetics and your personal driving profile along with the settings options. There are options here to prioritise resolution or frame rate, something you may want to consider before starting your first race. 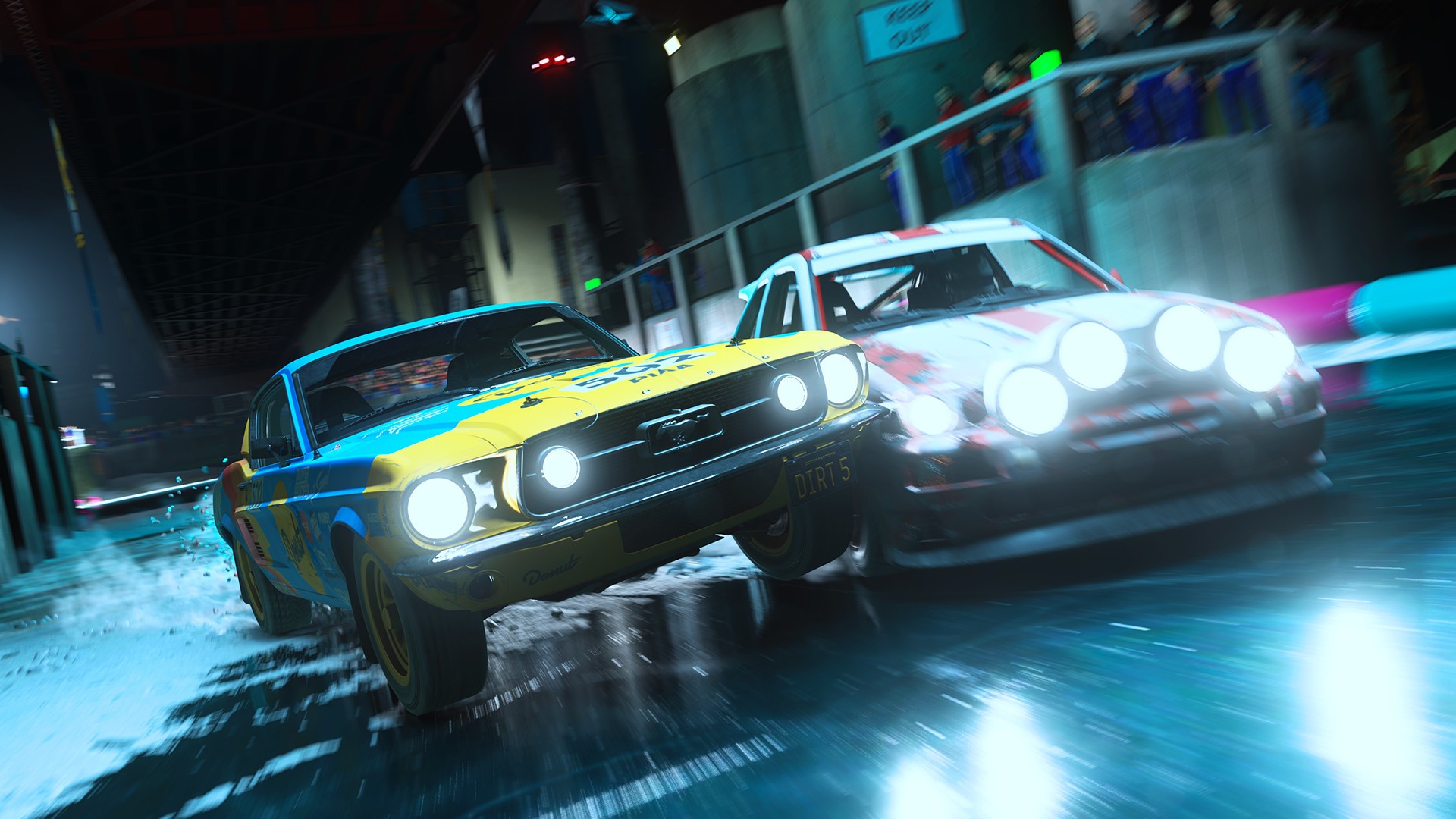 Career mode will set you off on a path of events to rev your engine through as you go off road and race across a variety of locations. These events will take you to various countries around the world from Norway to Morocco and even venturing to the big apple of New York. I was really blown away by the variety of locations and honestly playing through these themes make a track racing game a hell of a lot more interesting. Just by playing through these tracks I could see that a lot of work has been put into not only the gameplay, but the track design and the horizon in the background. You’ll be seeing the sights across ten different countries with 70+ various events to tick off the list, so there is a hefty bit of content in the career section to work through here before you fancy taking the wheel against real life opponents online.

I feel that the actual visuals on the circuits and vehicles deserve a special mention here. Sure, we have seen some of the best racing visuals in the Forza games, for instance, but Dirt 5 is on a par if not better in this respect. For this review I am playing using an Xbox One X but I can imagine when this title is running up to 120 frames per second it raises that exceptional bliss to your eyes. You’ll mainly be driving on dirt tracks with some snowy terrain thrown into the mix on some locations. Where the game shines is the elements such as water droplets on the windscreen, the mud spraying up and coating the car and the splashes as you drive through puddles along the way. The way the glare from the gun glints and bounces off the bodywork of your car is something you can truly admire if you like to drive with the third person camera view. The way the locations show off the environments in the backdrop behind the track it almost takes you away from the fact it’s a traditional track racing title. If you’re looking at a title to purchase with your brand new shiny new console which is going to be pleasing to the eye then absolutely Dirt 5 is a big fat green tick.

There are some events in the Career mode that move away from just racing lap by lap. Gymkhana makes an appearance here where you’ll be encouraged to drift around like a chav in a bright yellow Citroen Saxo with some tacky alloys and metal dust caps. Ok, well not quite the same, but it gives the player some different modes to play with. There are also Rally Raids which are essentially point to point races which is the norm for a lot of the dirt titles. Events will utilise different types of vehicle with official car manufacturers with the usual brands here. Career mode is where you’ll spend a lot of your time if you want to blast through the races and you’ll gain experience points and currency in order to purchase cosmetics, vehicles and more.
The only criticism I had of my time with the Career mode is from a personal perspective and that was the fact I found it repetitive after a little while and found the races were often the same experiences but rebranded. Career mode can be finished in a good four to six hours if you just want to plough through and get the deed done, but I’ll add that the AI isn’t easy to beat and races can be a tough but fantastic challenge. The saving grace for the career mode is the already mentioned exceptional luscious graphics and varied, rich locations which really holds the foundations of a great racing game. You will see weather changing, tough corners to master and some trading paint in the early stages of the race, which made me excited to play online with real people. 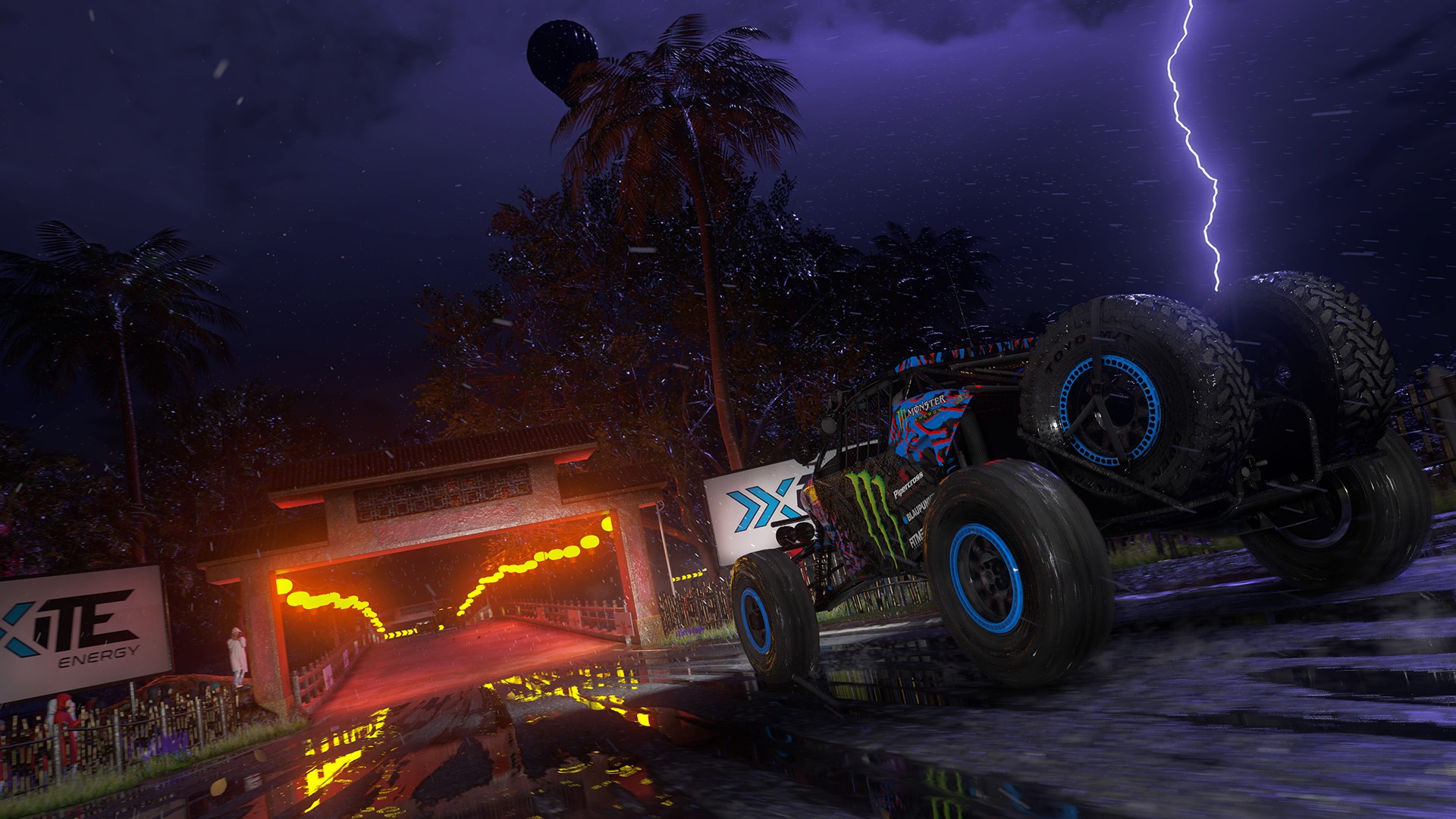 Another fantastic addition to Dirt 5 is the soundtrack, which features some huge names such as The Chemical Brothers, Stormzy, Pearl Jam and The Prodigy to name a few. There are over 40 tracks in total which is always great in a game. I find that some soundtracks such as the current FIFA21 playlist is too short and you listen to the same songs too frequently. Dirt 5 adds a long playlist which pumps out as you fly around the track and it pumps some real adrenaline through you.
Steering wheel support is here for Dirt 5 but for the purpose of this review I used a standard Xbox controller. The vehicles handle as you’d expect for any racing game and there were no noticeable issues with the way the cars handled. You’ll have the usual view options to toggle through if you like the dashboard view or just looking at the road beneath you.

Once you have mastered the career mode do you dare give it a go online? I am a multiplayer guy through and through so I was naturally intrigued to see how it panned out, especially with the evolution of the new playgrounds mode. There are a few options for online play, online racing and party games. Online races does what it says on the tin really, you search and find a game, race and finish. What I found disappointing was that once a race was done and dusted you had to go back to the main menu and cycle through the same process again making it a little long winded. I enjoyed the online racing much more than the Career aspect as there was much more of a competitive element here. The only downfall is other than levelling up and unlocking more in game currency to buy in game gear is the only goal to strive towards. Perhaps Codemasters could look into a lobby where people can race and then stick together. There are some fun party games, but these are a bit few and far between and could do with some expansion.

It appears that the online focus is magnified to the new playgrounds mode. Playgrounds gives the user the ability to make custom circuits and race arenas and upload them for other players to race on. There is a voting system to ensure that the most popular ones get credited and seen. The real joy here is discovering other players’ creations and trying to get the best time on the leaderboard, you could spend an awful lot of time here if you wanted to be dedicated. I covered this area quite deeply in my preview and it doesn’t appear to have altered much since I very first played it.

I enjoyed my time immensely with Dirt 5 and sunk some real fun hours into the game. I will be completely honest and state that usually track and circuit racing games bore me. I much prefer titles such as the Forza Horizon series, which gives you more freedom. But there is just something about this game that makes you want to stick it out as long as possible. It is visually stunning in all the right areas and whilst some races are repetitive, they are a real challenge and great fun to play as you admire the stunning visuals on the way round. Whilst the Career is short, there is online, split screen and playgrounds mode to go and discover to keep you entertained for some time. Playgrounds mode is a promising set of foundations into something that could evolve into a great time sink for racing fans and an amazing concept for future titles. If you’re going to purchase a racing game this year, make it Dirt 5!

Dirt 5 is a stunningly beautiful racing game which has a satisfying career mode and extends its longevity with online play and its brand new intriguing playgrounds mode.