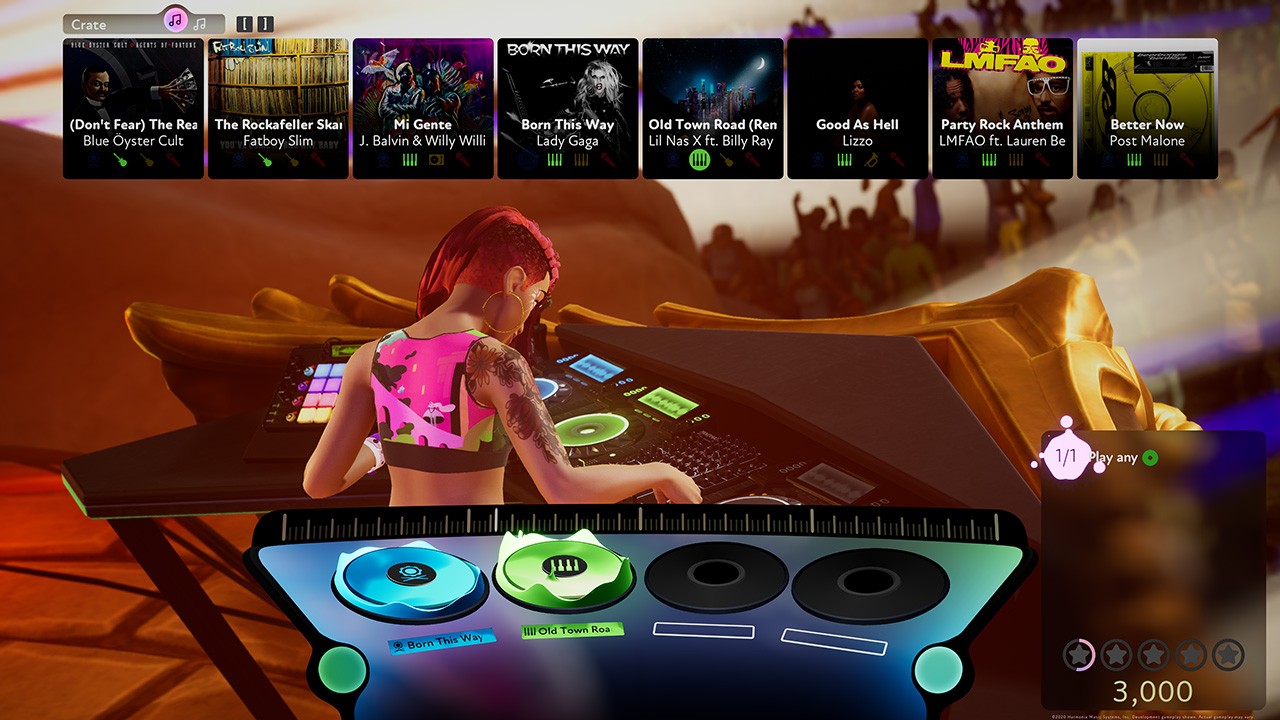 I doubt I will never not enjoy what Harmonix brings to the table. This particular group of developers has been lighting up screens, ears and minds for as long as I can remember, and they brought me one of my all-time favourite PS2 experiences. From Amplitude to Rock Band, they have this sense about music and gaming, and how to create a memorable, enjoyable time that involves actual musical identity to fully succeed. Of course, with great success comes even higher targets and goals, and it can be difficult to repeat such success. Plus, sometimes larger publishers glom onto their IPs and milk them to death, but that’s neither here nor there. I was never a guitar player, yet adored Guitar Hero. I could not dance, yet I made my way to Dance Central. And now, I fully know (and appreciate) that I will never be a DJ. Yet here I am, on the finest stages around the world, mixing and dropping with Fuser, the newest and possibly most ambitious creation yet.

Fuser is a EDM mixing simulation game, but don’t get out of control with trying to compare it to other game series just yet. Right from the get-go, Fuser has no peripherals, and no plans for any in the future. Instead, the ability to mix in the four elements of a song – lyrics, backbeat, instrumental and one other song-specific portion – are mapped to the control pad of whatever you’re playing Fuser on, so it’s very intuitive and straightforward. At the beginning of each set, you can take some time to decide what songs you’re going to have in your different crates so that you’re prepared to bring your own blend of magic onto the stage. Besides the music itself, there’s a lot to consider within the realm of presentation: after all, a big part of EDM is both the visual appeal as much as the musical. Therefore, there’s also the matter of what to add to your stage in order to make it move to your own style (and sometimes it helps out with the crowd).

Fuser starts out small and goes big, fast. The campaign mode is a fantastic, step-by-step way to begin to understand the finer points of the game without overwhelming you all at once. Beginning with just a few minor ideas, you gradually build to doing a lot of complex, on-the-fly artistry in order to make the most out of the game. Sometimes you remove all the vocals entirely and have four different baselines going at once to really get the dance crowd going. Sometimes you bring the house down by isolating only the lyrics to a song without anything else, then gradually bring back in more and more, amping up the energy. Controlling the feel of the music is so important, as well as acknowledging that you do have a crowd and their requests are hypercritical to higher scores. After all, this is a video game, and scores are the key to levelling up and unlocking more and more items, both avatar centric as well as new tracks to add. 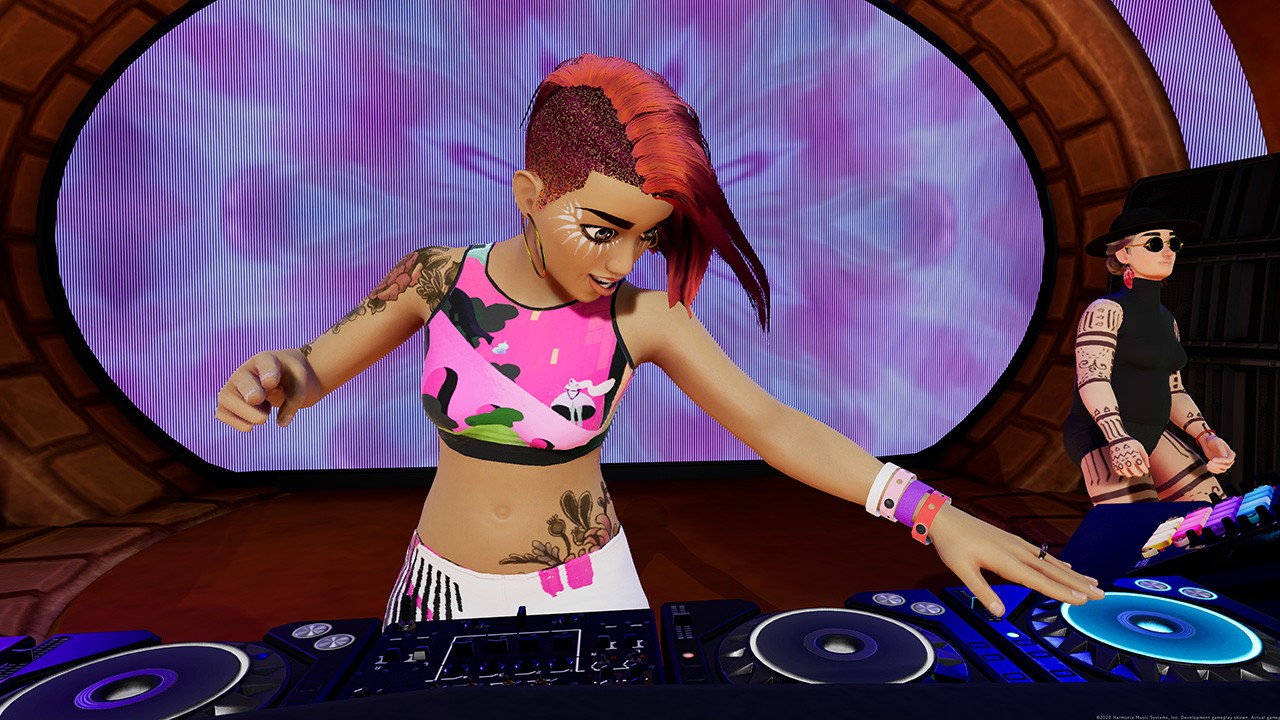 Harmonix has done so many things right with Fuser. First and foremost, the setlist for what’s available within the game is positively bonkers. Clocking in at around 100 songs, there is almost literally something for everyone here, and it helps to create entire identities for the how and why of mixing up on the stage. Are you someone more interesting in the synth era? Great, grab some A-Ha and The Weeknd and make the most out of it. Rock God chiming off within you? Rage Against the Machine and Blue Oyster Cult are here. Just want to pop off those pop hits? Carley Rae Jespen, Panic at the Disco and Lady Gaga can work together in harmony. From early disco to the newest in hip hop, the amount of music in the base game is amazing, and it’s all available with time and patience. Unlocking new songs involves playing more of the campaign as well as earning tokens to unlock the music, so you don’t NEED to have Joelene in your crate before you can grab Smash Mouth. For the most part, the musical progression is up to you.

Also, the avatar customization is very articulate and detailed, which will be great for the online crowd that’s sure to spawn from this new flagship title. Players have a good number of pre-configured characters to choose from, but people looking to invest time and energy will want to get the perfect setup for what their DJ looks like before they hit the streets, and you aren’t just finished when you make your initial character. Better sets with higher star ratings will allow you to get new accessories, new streetwear and really amp up your status within the community. Remember, players will look and know that you got those sneakers because you got five stars on one aspect of the Campaign, and that’s a flex that they can respect.

As it is a video game, Fuser’s approach to the mixing scene is both a blessing and a curse. On the one hand, the way that the necessity to drop in tracks on the downbeat makes a lot of sense so that people aren’t just mashing up buttons willy nilly. Being able to toggle through the up to four crates of songs to find just the right instrument, particularly as the requests are coming in, is a talent, and then to hit it on the right note so that everyone knows that you’re keeping the rhythm set by the game is another feat. When it comes down to it, the technical aspect of Fuser is what’ll save the game for players who are less aware of the full range of music and who have never really been to an EDM festival (which, I’m guessing, are fewer people than I realize).

At the same time, needing to keep to the set rules of dropping and tempo can sometimes make the game feel wonky. For me, in particular, I love to smash different lyrical modes and I want to break some lines in order to make a more powerful effect in words and timing. However, if that doesn’t go with the timing of the song itself, Fuser will punish you by having fans get disappointed, which can be frustrating. In that same vein, you had better get used to hitting it EXACTLY on the downbeat, because following what you THINK is the right timing is different than what the game thinks. Thankfully, there is calibration adjustment, so don’t be the dude who complains about your pitch-perfect ear being better than the software, just fix it. 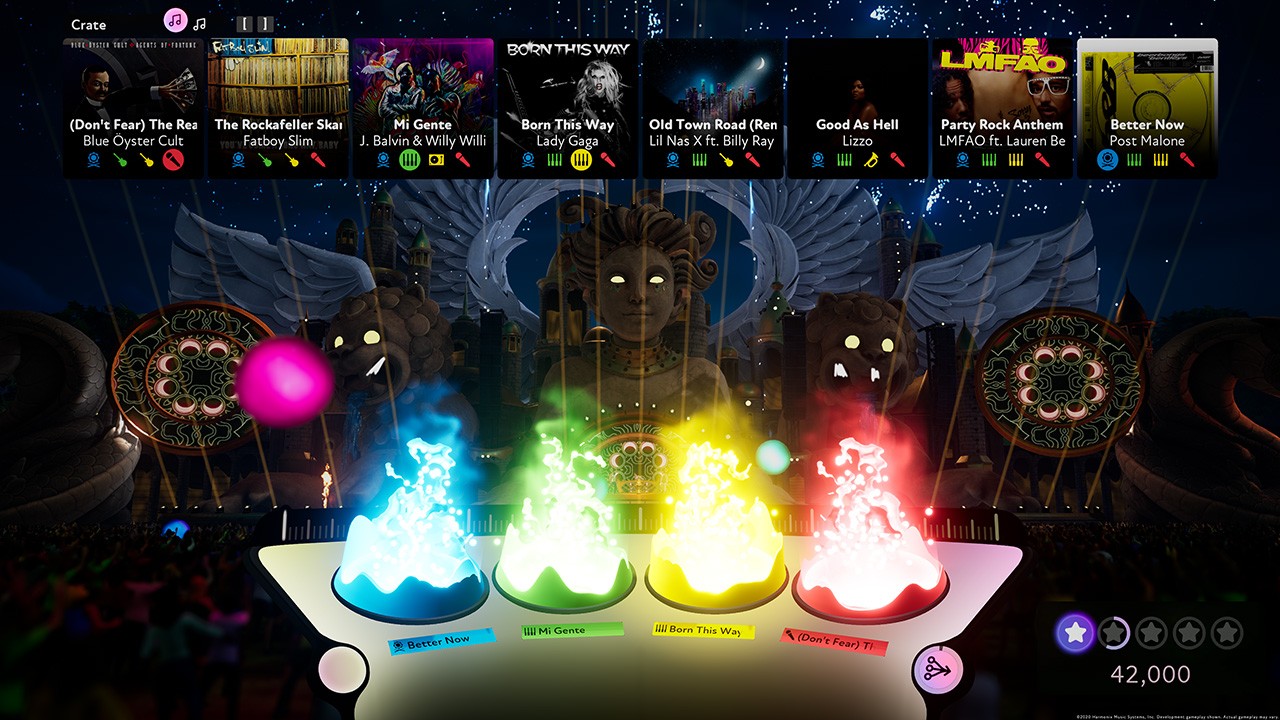 Also, as a minor point of contention, Fuser simply doesn’t look as crisp as I think it will on other consoles. This is understandable, this is acceptable, but I wanted to acknowledge the elephant in the room about this one before everyone in the universe lost their mind that a game doesn’t look as good on Nintendo’s portable dream versus the juggernauts of Sony and Microsoft. The graphics are a little fuzzier and the load times are probably a little longer before you get into a set. That’s the truth, and if your streaming audience is going to unsubscribe because you’re not playing a game in 1440p or whatever, don’t get the Nintendo Switch version. Boom, problem solved.

However, once you overcome these minor points of contention, holy shit is Fuser a fantastic experience. You can make custom mixes that you have at the ready to drop whenever you think it’s the best time for a crowd to vibe to your jams. You have A Tribe Called Quest, Rick Astley, Fatboy Slim and Megadeth in the same goddamn game, and you have the power to bring them together. Once the community goes live at launch, the online battles will highlight the player’s ability to out-mix and out drop another DJ in real-time, and the devs have already asked players to submit, through the game, their own Synth mixes to see who has the best taste in the whole gaming ecosphere. There’s no fail mode if you want to just screw around and have fun. There’s amazing rewards to be had if you’re competent. And there’s probably DLC with an insane number of other songs coming up because that’s what Harmonix does and that’s how they deliver. The fact that so many songs are available already is impressive, and the amount of work that went into making the tracks spliced up and ready to drop in and out at a moment’s notice cannot be overlooked. This is a technical masterpiece, and I applaud that it works so damn well on the Switch. Just throw that bastard into aeroplane mode and practice your mixing on the commute in: you’d be shocked how well Warren G and Meghan Trainor work together.

I’ve said my piece: this game is fire. You’ll be loving it too. Go out, become a Fuser, and share your music with the world.

The next great step forward from Harmonix brings you to the shores of Ibiza and beyond: it’s time to mix, to dance, and to share music with the world.