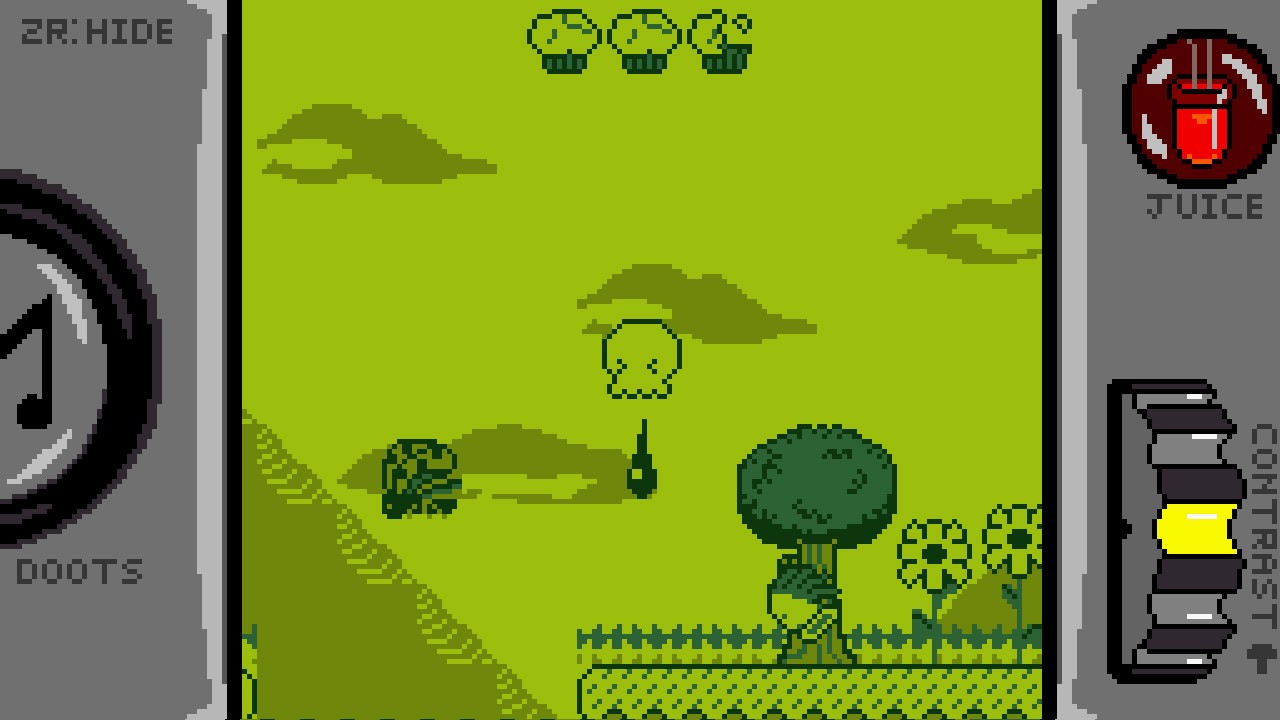 No, “Squidlit” is not a term for a genre of fiction showcasing the lives of cephalopods. It is a nearly pitch-perfect recreation of a Gameboy era game, from graphics to sound design. As a titular squidlet, it is your job to defeat the God-Emperor Skwit Skwot and thwart her vague plan. Doing so will see you walking, jumping, and hitting the jump button again to spray ink out of your nether-regions onto unsuspecting enemies. I played it on the Nintendo Switch, which made sense to me given the game’s obsessive adherence to the aesthetics of everybody’s favourite ancient handheld console.

Let’s get one thing out of the way quickly: the platforming is great. Jumping from ledge to ledge is completely intuitive, and takes you back to the glory days of old right away. The combat, by comparison, is lacking, but not at all a deal breaker. The boss fights are creative and interesting, but in some cases it is difficult or even impossible to tell if and when you’ve dealt damage. This could lead to controller-throwing frustration and even rage quits out of cheapness if it were a more difficult game. 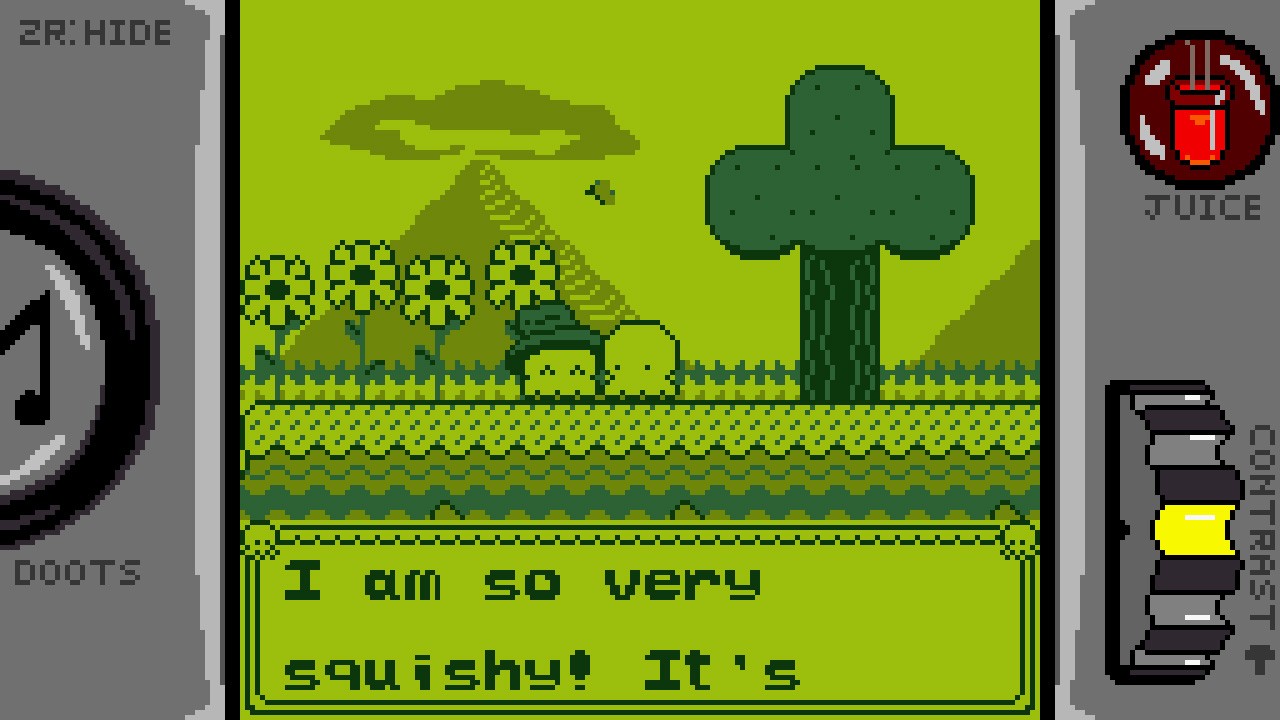 This game is very, very easy. “Squidlit” makes the average Kirby entry feel like a hellish slog through the depths of Hollownest, and I’m unsure if this is good or bad. There is a tendency in indie gaming to develop games that are punishingly difficult, and so there’s something oddly refreshing about sitting down and breezing through a Gameboy game-that-never-was in a forty five minute span. Did I mention the game is only forty five minutes long? That might seem short, but I’m not sure that the length is a knock against it either. The play time is about on par for a Gameboy game, and I could see someone spending $50 to play this back in 1989… but it would be about ten times as difficult and thus would require many playthroughs to finish.

The graphics are exactly what you would expect. You are a muted greenish yellow, as is every friend, foe, boss, platform and bookshelf. This is only annoying when you don’t realize that the chandelier you thought was a bit of scenery was actually a platform, or when an enemy is obscured by whatever is going on in the background. There are also times when sprites that are usually enemies are actually your friends. These problems are kind of inherent to the yellow-green sludge (the developers affectionately call it “grellow”) that is part of the deal when you play a game meant to be a 1:1 facsimile of a Gameboy game. Remember: that particular piece of hardware existed when the internet was a series of tubes used by universities and the army. 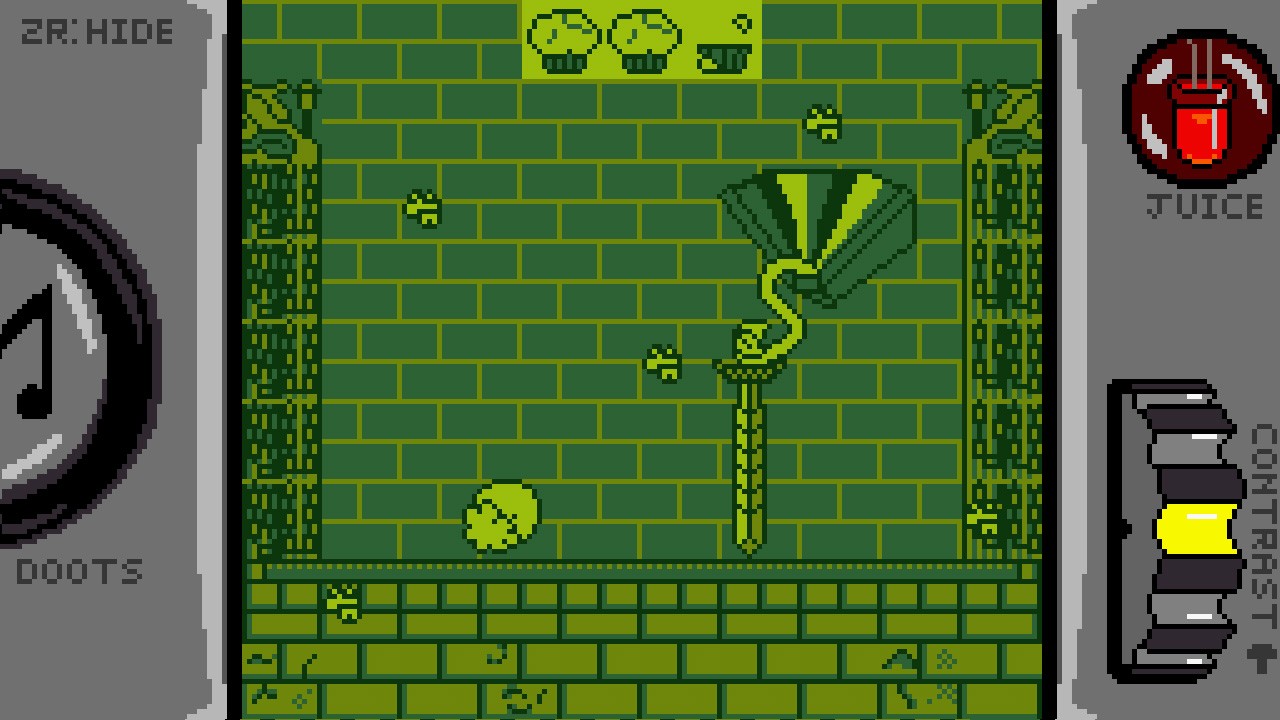 The quaintness is a feature and not a bug, however, and absolutely adds to the cuteness of everything going on around you. Your HP is muffins! There’s a button that lets you smile at people! Every song is a beep or a boop or a plink or a plonk! This game truly made me feel like I was nine years old again, playing games in the back seat of my parents’ car on an eight hour drive to visit family.

“Squidlit” doesn’t have much replay value at all. But for $1.99 it is a fun, nostalgia filled little jaunt that packs a lot of creativity into an adorable package. Sometimes it goes on sale for far less than that, and if you find it for under a dollar and you have forty five minutes to kill, I would call it an automatic pick-up. There’s a sequel coming out next year that adheres to the limitations of the Gameboy Color, and I’m looking forward to seeing what Squidlit Ink (get it?) can do with the expanded colour palette.

“Squidlit” is the Gameboy classic that never existed, with all of the clunkiness that entails but without the difficulty that would make it insufferable