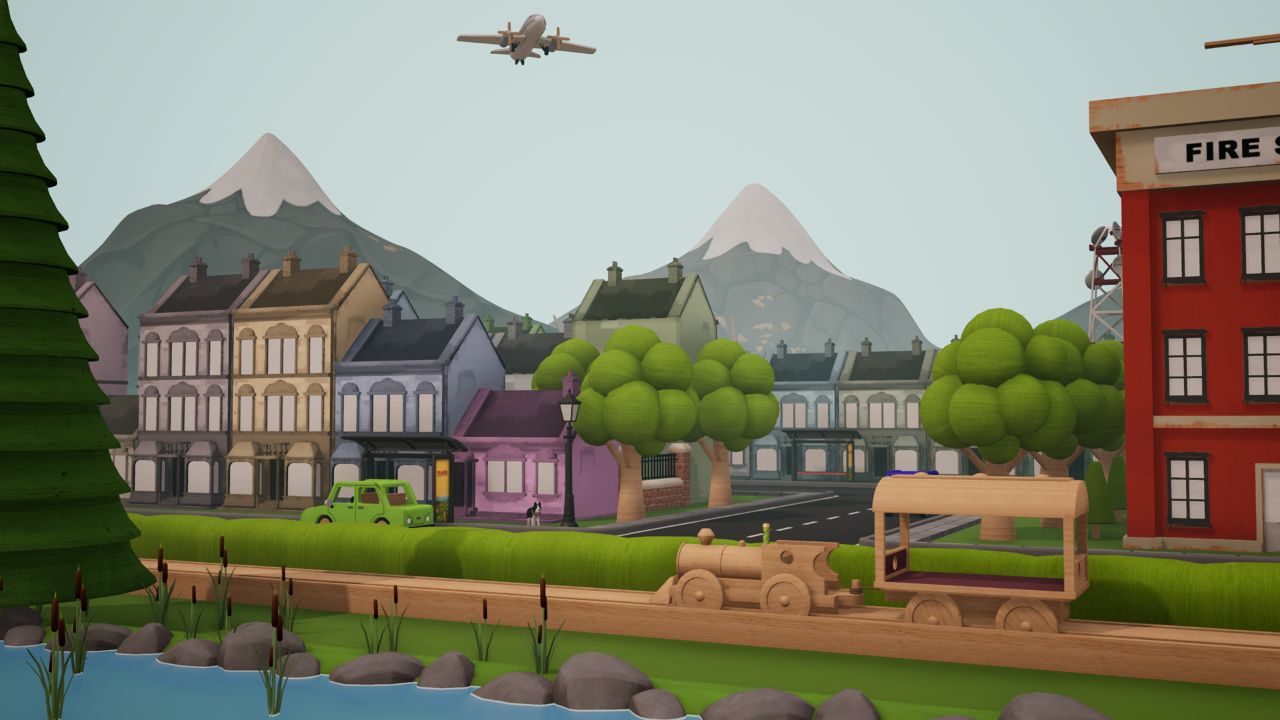 Some games are designed to be stress-inducing nightmares, forcing you through level after level of enemy hordes and murderous traps like buzz-saws and spikes. These games give one a sense of smug satisfaction whenever an environment is traversed, as the player, half-broken and sweating, finally overcomes insurmountable odds. Envision the polar opposite of one of those games and you will wind up with something like “Tracks: Toybox Edition,” a game in which the main objective is building a wooden model train set and riding around in it.

At first glance it seems as though there isn’t very much to “Tracks.” There are only a handful of maps, and half of them are clones of other maps transposed to night time. There are only two modes, free play mode and passengers mode, and passengers mode only exists in certain maps. But “Tracks” isn’t a game about objectives or trophies or any of that. “Tracks” is a game that celebrates invention and gently encourages you to make the model train set of your dreams. “Gentle” is the keyword in any description of this game. From the soundtrack, a simple and pastoral piano loop, to the default design of the unencumbered wooden train, this is a great game for parents to play with small children. Sitting down and watching from the POV of your train as it rolls through a course you built is a soothing experience, like sipping hot tea on a cold afternoon. 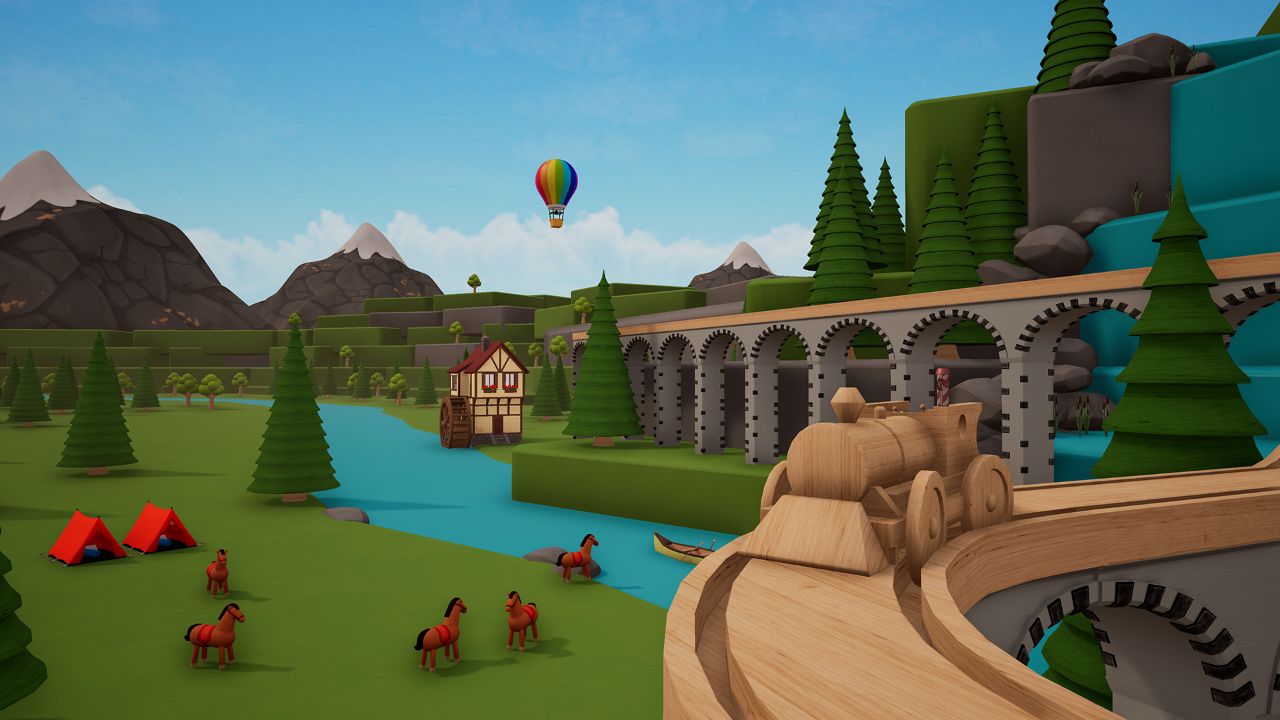 Free play mode is exactly what it sounds like. You’re given a blank 3D space like a bedroom or the surface of the moon, and you build away to your heart’s content free of any constraints. The only objective is to build pretty things and lay tracks down so that you can ride your train around them. Passengers mode puts you in a room and places passengers and stations in progressively harder-to-reach places, asking you to bring them together. Oddly enough, I had the most fun in this mode. Not because of the objectives themselves, but because they give you a sense of structure that doesn’t exist in free play. When I first started playing “Tracks,” I was building in free play, and didn’t even realise that you could carry passengers from platforms to stations. It also gives you a good idea of where to put stations, and what the game can actually do beyond the obvious by forcing you to clear objectives like making your train jump.

Passengers mode isn’t perfect, and there are annoying time limits for certain actions which feel alien in an experience that is otherwise so stress-free. But these time limits are optional. There is no punishment if you just ignore them and dot the environment with little peach trees instead of laying the track down that the game asks you to.

As the full title of “Tracks: Toy Box Edition” implies, this game is like a giant virtual toy box. There are enough decorative elements for you to make an entire city or countryside to envelope your train and its route. Objects range from houses and shops to rivers, roads, and even mountains. The object models themselves have fun details like lightly chipped paint to make the world feel even more lived-in. You can even change the colour of the sky and the weather if you get bored of looking at the same endless white void in the back of your world and would prefer to see a snowy blood-red hellscape. I preferred building in the two-room environments as opposed to the blank ones; the shelves and bunk beds and couches of the rooms encourage a verticality in your building that the completely blank, flat canvases do not. You still have the option to build as vertically as you would like, of course, it just looks weird to me to have buildings and Railroad Crossing signs floating in the sky. 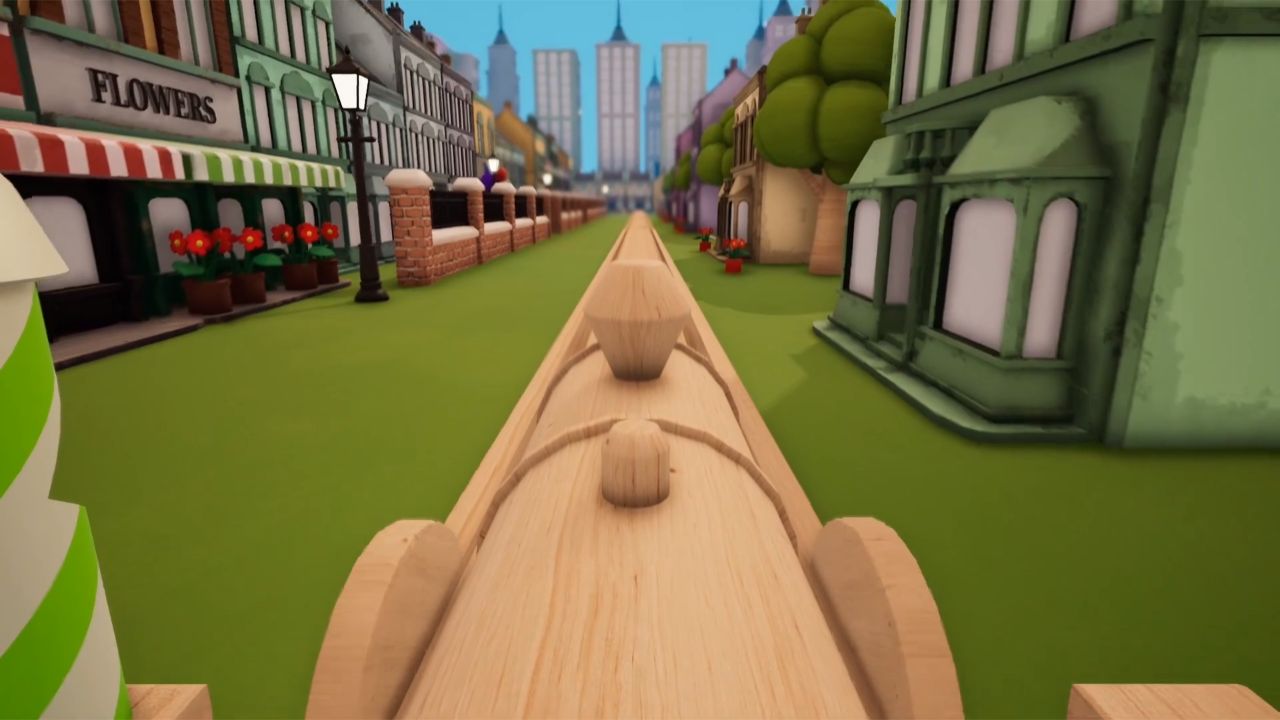 “Tracks: Toybox Edition” has some consequential flaws. Even after playing through the tutorial that automatically loads up when I first started “Tracks” there were many times where I had to go back to it to remember some button mapping that wasn’t shown in the “controls” section of the menu. And saving is the albatross around this game’s neck. For some reason “Tracks” makes you select an environment before loading your track, so if you are in the wrong environment your track will load wrong. I also had the experience of saving a game in passengers mode and being unable to load it again without a frozen loading-screen that lingered on my television for ten minutes before I gave up on it. This occurred multiple times. Luckily, it only seems to happen when trying to load a track into passengers mode, so it isn’t completely game-breaking. But it’s 2020 and I’m writing this draft in a readily loadable Google Doc that autosaves. Saving a game file should be the most basic part of the experience, not the jankiest.

If you can overlook those flaws, “Tracks” is like a soothing cup of chamomile tea. Because there are no objectives in free play, “Tracks” is infinitely replayable and you can easily find yourself sinking hours and hours into creating the perfect landscapes and rollercoaster-esque train routes.

Aside from a couple of small but noteworthy flaws, “Track: Toybox Edition” is like a cup of hot cocoa: soothing, warm and sweet.