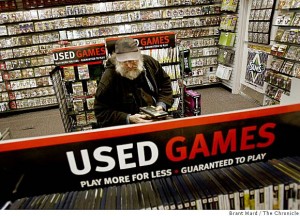 Ok, first off; none of this has been officially confirmed, but with news spreading like wildfire on the net, it seems that a block on second hand games on the next-gen Xbox is a very real possibility.

I bloody hope not. If I spend £40 on a physical piece of media, I want to have the option of selling it on, or trading it in, or shit, give it away to a stranger if I so wish. If the rumours are to be believed though, my shiny new 720 disc won’t be worth a damn once I’ve used up my one time code. Want to take it around my friend’s house? Nope, that’s not happening. Guess I’ll just have to buy another copy.

I appreciate that second hand sales do cut into publisher and developer sales and from a publisher relationship standpoint would certainly put Microsoft in a very strong position, but what about the brick and mortar game stores, those stores that are becoming increasingly dependent upon second hand sales to stay afloat? GameStop’s shares have plummeted off the back of the news, and at the time of writing, it’s still just a rumour. Imagine what will happen if it’s confirmed? With 46% of their gross profit coming from used game sales in 2012, the damage this decision might cause, may well prove irreparable.

Strangely though, despite the negative impact on the consumer and the potentially devastating financial effect on gaming retailers, the biggest loss in the long run might well be to Microsoft’s deep pockets. Xbox 360, despite the whole Kinect thing, is still largely seen as the core gamer’s console of choice (don’t get angry, I know it’s not every gamer’s console of choice). If they put this restriction on the machine, they are going to lose a lot of support going into the next-gen…..a lot of support. Sure, your average Joe who buys FIFA and Call of Duty each year probably won’t give a monkeys, but your committed, market savvy gamer, oh, you better believe he will care. I care. Shit, I’m angry. Microsoft, the Xbox 360 has been one of my favourite consoles of all time – don’t ruin the relationship with a poorly conceived decision based purely on the bottom line. It will backfire.

It all stinks of the PS3 launch – a company off the back of a major success doing whatever they want on the assumption that the public will flock to their product regardless. It didn’t work out for Sony and Microsoft, if this is your plan, it won’t work out for you either. Sure, given time, the gaming public might forgive as it becomes the industry norm, but to attempt something like this at launch could hit the initial take on figures in a big, big way.

Of course, it doesn’t help matters that the news of blocked second hand games comes hand in hand with the other baffling rumour that the next-gen Xbox will need to be online at all times to work. Surely not? Surely, in a world of poor coverage, broken signals and in some cases, an all but complete lack of signal, Microsoft wouldn’t do that. Would they? Again, I hope not, because if it’s true and Sony release a PS4 with basically the same specs but with second hand games and the ability to play when offline, Microsoft would be giving their major competition a serious head start and an absolutely huge PR boost.

Again though, let’s put all of this into perspective – this is a rumour. Nobody official has confirmed any of this yet. I just hope it remains that way.