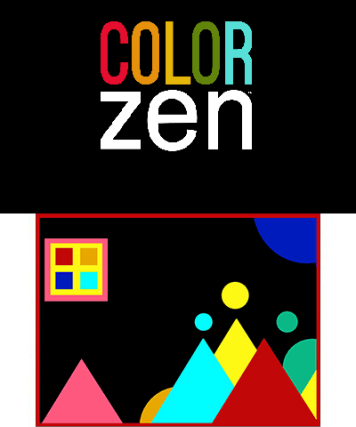 Being a big fan of puzzle games, I was excited to play Color Zen as it seemed like something completely different – a simple and relaxing experience based around matching colours and shapes. The gameplay style is new and unlike the sort of puzzle games I usually play, such as Pullblox or the Professor Layton series. While those games can often require you to spend upwards of 20 minutes on a single (albeit particularly complex) puzzle, this is the type of game that lends itself to playing in short bursts which makes it perfectly suited for when you have a few spare minutes to fill. However, this simplicity can work against Color Zen, as it quickly starts to get repetitive during longer play sessions. It is here that Color Zen betrays its origins as an iOS/Android title, intended for audiences with shorter attention spans than those of us who own real games consoles! But if one accepts Color Zen’s pace and gives it five minutes at a time, they’re in for a treat.

One aspect of the game I particularly enjoyed was the soundtrack. Comprised of chilled electronic tones, it changes when advancing from chapter to chapter and develops into a tenser track when you reach the harder levels. It also manages to avoid the trap that many puzzle games fall into, which is to make the player sick of the game’s soundtrack due to the same song being repeated for ages. Pullblox, another puzzle game on the 3DS eshop, by no means has a bad soundtrack, but the constant repetition of the same two and a half minute song while you’re stuck on a difficult puzzle can grind to the point of motivating you to go on a ‘Falling Down’-esque rampage. While avoiding that problem, however, Color Zen’s music did have the annoying feature of stopping and starting after you’ve completed each puzzle, jolting you out of its relaxing atmosphere somewhat. This can be quite annoying when the puzzles are simple enough that you’re finishing them in a few seconds, and a soundtrack which played continually from one puzzle to the next would have been much preferable. 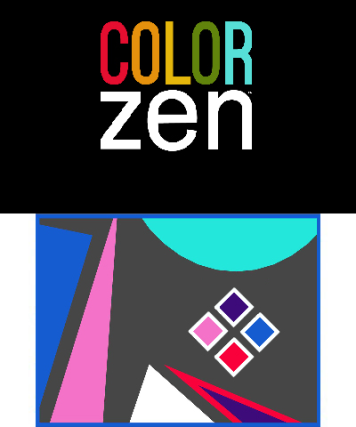 The simplistic art style (it seems more appropriate with this game to call it art style rather than graphics) was very enjoyable and well-suited to the game’s feeling. Unfortunately I was disappointed with the lack of 3D given this being a 3DS title, but it did make sense given that all the action takes place on the bottom screen due to the necessity of using touch screen controls. Still, all that’s shown on the top screen is the title of the game on a black background – it does seem a waste that something more visually appealing wasn’t put on there instead to make the most of the space.

I was very pleased with the amount of content in the game, as in total there are 4 game modes (Classic, Reflection, Serenity and Nature) each of which has 6 chapters (apart from Nature which had 5). In each chapter are 20 levels which get marginally more complex as you progress through them. This progression in difficulty prevents the game from becoming too stale, though at points I did feel like there should have been a steeper difficulty curve to provide more of a challenge. 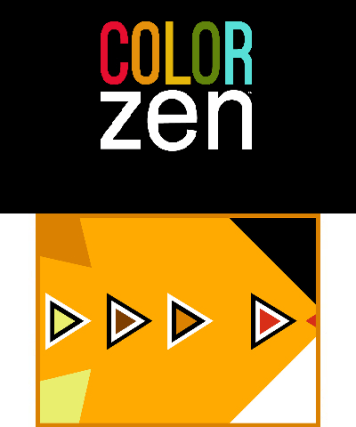 The Classic mode is fun enough to begin with, but it becomes boring by comparison when playing it just after trying out one of the other modes. I’d recommend playing Classic first as it shows you the methods and overall the general feel of the game, and then when you feel ready you can sink your teeth into the meatier modes. The Reflection mode is my personal favourite, and it’s a lot more fun and a lot more challenging as it requires you to move two shapes on opposite sides of the screen at once. You have to constantly focus on how moving one shape will affect the other, and any lapses in concentration can ruin your plan to complete the level. One of the other modes is Serenity, which appropriate to its name is calmer and more relaxing than the other modes. There is no real panic when playing through these levels like there is at times with the other modes, due to the slower-paced music and slightly less challenging puzzles. While this mode may not appeal to some due to its slow progression and lack of difficulty, I find it to be a nice part of the game as it provides a bit of a respite from the more difficult modes – the experience is akin to sitting by the fire in your favourite armchair with a mug of hot chocolate, only with more colours. The last mode is Nature mode, which despite its name isn’t much different from Classic mode, just with a more complex layout.

In conclusion this game is fun to play and suitable for any sort of short journey or spare moments. Due to the impressive amount of content (especially given the low price point of £2.99), the great soundtrack and how different it is from other games, I’m going to give Color Zen 7 out of 10. I found it to be very enjoyable, but to some people who are expecting a difficult challenge from the get-go it may just seem like a waste of time.