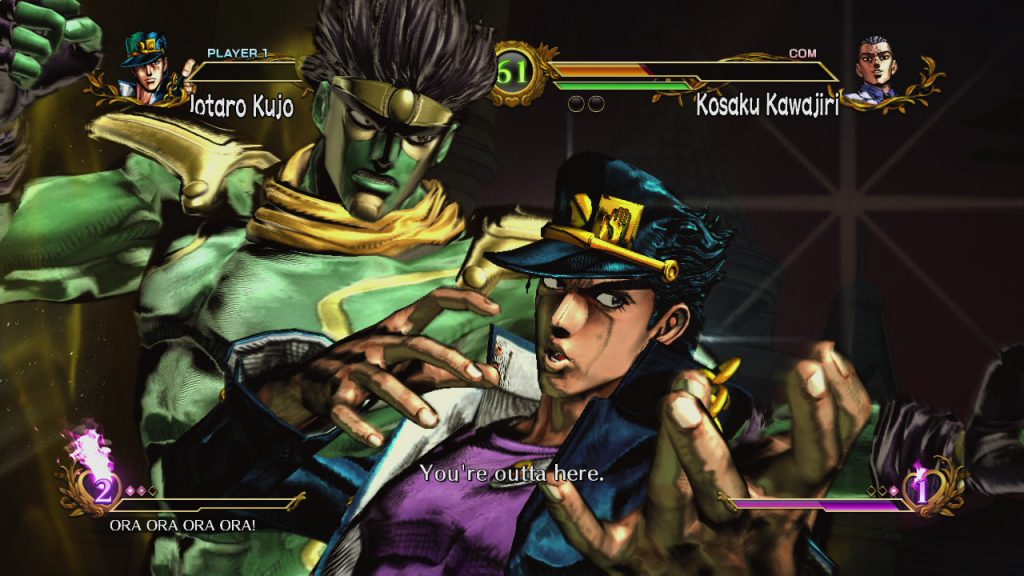 2D fighters are, by definition, hardcore games. Sure, just about anybody can pick up a controller and smash the buttons like an angry monkey, but to get anywhere near the best out of them, a huge level of commitment is required. Mastering the nuances of a single character can take months of practice, let alone a whole roster, but while JoJo’s Bizarre Adventure: All Star Battle might not be the most technically demanding fighter on the market, it’s commitment to fan service and its undiluted love for the source material ensure that only JoJo’s biggest fans will get the best out of this lopsided, but admirably committed package.

So, it might be a different kind of hardcore, but don’t come in making the mistake of thinking that this is some simplified, easy to pick up fighter, as JJBA: ASB is anything but. It might not have the technical depth of a BlazBlue or Street Fighter III: 3rd Strike, but its still, on a purely technical level, a relatively deep fighting experience. It’s unlikely to be involved in much tournament play and certainly doesn’t share the depth of Capcom’s own JoJo fighter released back in ‘98 (also available on XBLA), but the extreme levels of niche appeal and absurd fan service will ensure its place as something of a cult classic, and one likely to be loved by a small but committed crowd of JoJo fans.

The honest truth though, is that JJBA: ASB is so niche, so under the radar, that I’m still amazed that it has even made it to these shores. Yes, I’m glad it’s here, but man, this really was a punt by Bandai Namco. It may be hugely popular in Japan with the original manga released way back in 1986 and a whopping 80 million sales already in the bag, but over here, well, to say that knowledge of the brand is limited would be something of an understatement. 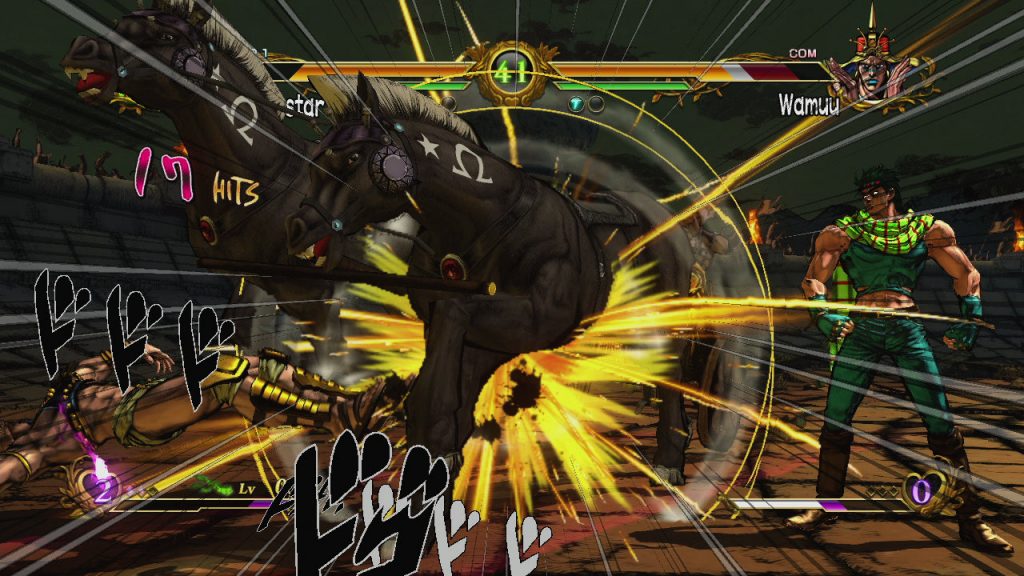 Still, it’s here, and you know what, we should be happy. Shit, I’m sure JoJo fans will be; but even if you’re not a fan or know next to nothing about it, there is enough quality content here and certainly an enjoyable enough fighter to make it worth a look for even the utterly uninitiated. Sure, the crazy characters and nonsensical dialogue will prove off-putting to some, but from a technical standpoint, this is an immediately likeable, largely engaging fighter with fantastic visuals and a real sense of flair. It might be more Naruto than Street Fighter IV (no surprise given that it’s a Bandai Namco product), but that shouldn’t put you off what is one of 2014’s more interesting Western releases.

Despite a penchant for flair, fan service and visual pyrotechnics, JJBA: ASB does, in a fundamental way, play in a  similar vein to the likes Street Fighter and its ilk. It has combos, is played primarily on a 2D plain and will feel immediately familiar to those used to the half circle move sets made  famous by Capcom’s finest. Saying that though, unlike the Street Fighter’s of this world, JJBA: ASB isn’t interested in balance or competition – it is instead interested in putting a mile wide smile on the faces of JoJo fans and in making the game as visually impressive as is possible, and in fairness to developer, CyberConnect2, they have created one of the prettiest and most interesting fighters of recent times.

From the visual representation of sounds in battle, the odd narration from obscure characters and a host of moves and poses taken right from the pages of the manga, it’s genuinely hard to imagine how they could have done a better job of capturing the spirit of, Hirohiko Araki’s long running manga. With all the usual game modes you’d expect from a  modern 2D fighter along with a solid online component and extensive campaign and story modes to get through, JJBA: ASB certainly delivers an impressive package. Yes, fans of the series will obviously get more from the storylines and myriad of nods to both characters and story arcs, but for even the JoJo ‘newbs’ of this world, the content is enjoyable and entertaining enough to make it well worth a look. The campaign is admittedly rather weak and the micro transactions for additional characters does leave a decidedly unpleasant taste in the mouth, but despite these issues, what is here is mostly solid stuff. 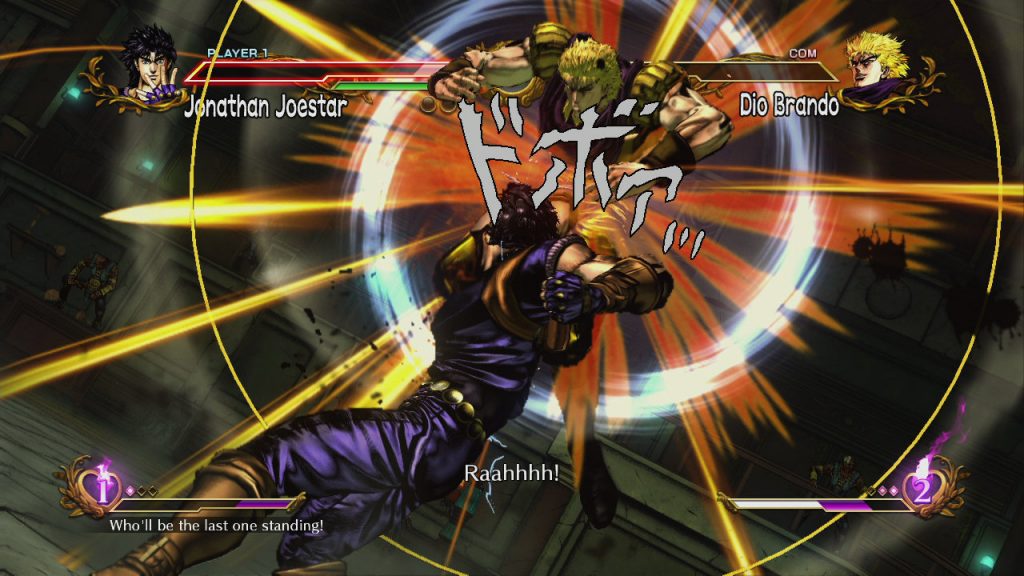 While the manga’s visual flair and the games’ commitment to recreating its most famous imagery during combat helps JJBA: ASB stand out from the crowd on a purely aesthetic basis, the ‘Style’ moves ensure that, JJBA: ASB also plays uniquely too. With 5 different ‘Style’ powers, these moves or power-ups ensure that each characters most iconic attributes are captured in game and incorporated into battle. From psychic character representation, ala the Capcom original to charged abilities and even horses (yep, there are horses), the ‘Style’ moves ensure that the combat is at least half as mad as its art direction.

JoJo’s Bizarre Adventure: All Star Battle is clearly a game aimed and created for fans, and for those, this truly is fan service of the highest order. From the way it recreates the manga’s most famous characters and story lines to the way it so effortlessly captures the spirit of the series, CyberConnet 2 truly have gone above and beyond in their quest to create the ultimate interactive, JoJo experience. Even for fighting fans though, those with little or no prior knowledge of the series, there is more than enough quality content here and certainly solid enough fight mechanics to make this well worth a look. Either way, fan or not, JoJo’s Bizarre Adventure: All Star Battle stands as an eccentric, finely crafted and really rather brilliant fighter.