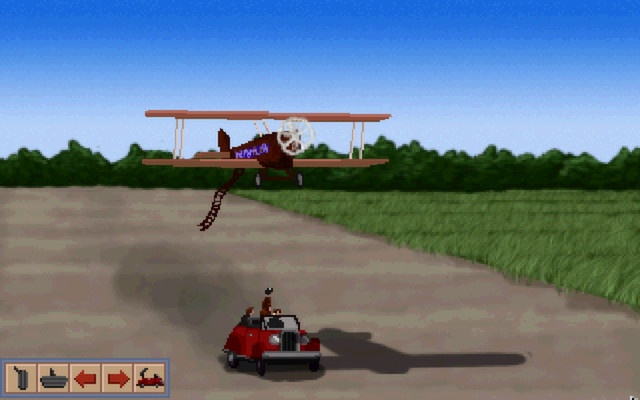 A retro-style point-and-click adventure game out a real estate salesman in 1920s Miami featuring real-life historical figures? It’s not exactly the sort of blockbuster premise to excite gamers who no doubt overindulged (literally and figuratively) over the Christmas period. Yet much like the iconic ‘June in Miami’ billboard erected in the freezing Winter of New York’s Times Square, the prospect of a traditionally familiar adventure game set in a tropical climate had a certain appeal, much like a sofa in front of the fireplace after a day of festive eating and drinking.

Loading up A Golden Wake for the first time (which features a prologue in New York before you transfer to sunny Miami) you can immediately sense the tribute to early adventure games as the pixellated characters on top of painted backgrounds is very reminiscent of titles like Monkey Island, Indiana Jones and Beneath a Steel Sky. Indie developer Francisco Grundislav has done a great job with setting the scene with some basic but great portrayals of Miami in the early 20th century. For the most part I delighted in the retro graphics although there were a few occasions where there was text that was a bit tricky to read with the (deliberately) pixel style. 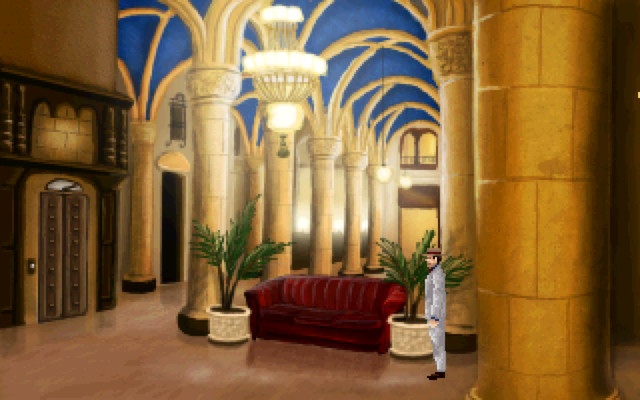 As well as coding and art, Grundislav has done well to write a tale that is fun despite the slightly unusual setting. The early boom-years of Miami isn’t one that I’ve seen featured in video games before but it’s brought to life well here and it’s clear that there is a genuine sense of dedication and commitment to the setting. The storyline may only be a few hours long but it’s well structured and interesting to follow with some memorable characters, even if it does seem slightly ‘safe’ and pedestrian despite the inclusion of mobsters and hurricanes. Part of this may be due the inclusion of various real-life historical figures and the need to not disrespect them, but even the protagonist Alfie Banks feels like a bit of a wet blanket at times. For a salesman he does seem overly nice most of the time, as do most of the characters – even the ‘bad’ characters never feel too evil.

Alfie is very well voiced though, as are the majority of the characters featured – although some of them can feel quite bland at times. The writing helps here again as the dialogue feels quite natural and is also quite funny on occasion. The chief highlight on the audio side however is the music which feels extremely authentic with some great jazz and ragtime pieces playing in the background and really setting the scene.

A salesman protagonist seems fairly dull on first inspection but the occupation is actually quite appropriate for the adventure game setting as the various tasks and quests you undertake make sense for an ambitious young man in a new working environment, and the chatty dialogue seems very appropriate for a salesman. A Golden Wake does follow many of the traditional tropes for an adventure game but there are numerous instances of good design to differentiate it from some of the more frustrating titles of the past – puzzles are never too obscure, navigating between areas is simple and quick due to the map and your trusty company car and the dialogue always feel useful. 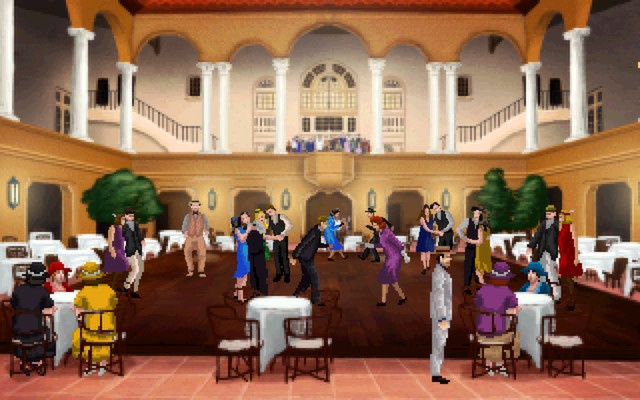 A special mention is also due to the variety of puzzles included. While the usual fetch quests do feature, there are numerous other types of puzzles and mini-games to mix up the adventure. The most common is the ‘persuasion’ puzzle where you attempt to use Alfie’s superior salesman skills to choose the correct conversation paths and react to facial expressions and visual cues. While I did enjoy these they were the most difficult of the puzzles I encountered and – in an unusual step for an adventure game – can actually be failed. However failing doesn’t end the game as there is always a secondary way to progress, although obviously never as satisfying as progressing via the more challenging primary route.

I was also pleasantly surprised with the director’s commentary option I used on my second playthrough. This included design decision, historical facts, insight from the musical composer and some amusing bloopers from the voice-cast and really reinforced how much effort had gone into ensuring the setting felt right – it also managed to be educational as well without feeling forced.

There’s nothing especially outstanding about A Golden Wake, but it’s a great example of making a retro adventure game that’s enjoyable for a modern audience. It may be over relatively quickly but it’s good fun while it lasts and actually has a bit of replay value. Despite a couple of moments of (very mild) violence it’s also suitable for younger gamers as well, although older gamers will probably enjoy it even more.