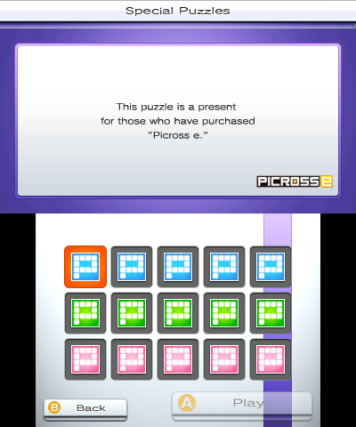 Picross e6 is the continuation of the popular Picross series of puzzle games. Now, I can save you some time here. Have you played a Picross game before? If yes, did you enjoy it? If you answered yes again, then you will no doubt enjoy this game, and can buy it safe in the knowledge that you’ll have lots of fun and will be getting a good number of puzzles for you money.

If you answered no then sorry bud, you best go look for your gaming satisfaction elsewhere, as Picross e6 does little different from its predecessors and can really be viewed more as an expansion pack. And if you’ve not played a Picross game before then read on, and get an idea of what the fuss is about.

There are three game modes in Picross e6: Picross, Micross, and Mega Picross. The basic Picross mode contains 120 standard Picross puzzles, which grow in size (and therefore difficulty) as you make your way through them. For those unfamiliar with Picross puzzles, they consist of using numbers displayed next to a grid of squares in order to chisel away the right squares and, if done correctly, reveal a pixelated image. 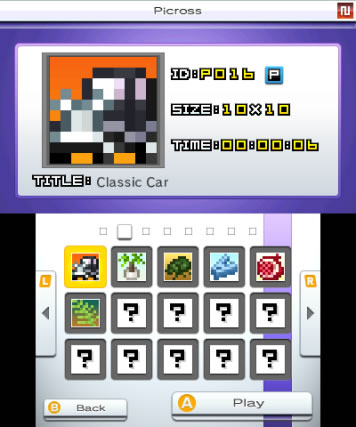 In Mega Picross the format is shaken up a bit, as not only are you tasked with solving puzzles with the usual numbers, you’ll also get special numbers that cover two lines or columns simultaneously. These can be extremely tricky to figure out, so I’d recommend them to Picross veterans only! As a nice little bonus to loyal Picross fans, there are also extra puzzles available for those who o wn the previous games in the series.

The music in the game is fairly bland and can get quite repetitive, so I wouldn’t recommend it as the sole audio accompaniment to your gameplay. As Picross is perhaps the kind of puzzler best suited to short bursts or as entertainment while commuting, this shouldn’t be too much of an issue. Another slight negative is that the pictures which are supposedly formed by the selection of squares you fill in very rarely actually look like what they’re supposed to be, though I supposethat’s a necessary evil when you get to the ninth game in the series. There are only so many feasible ways that pixels can be arranged!

If you like its style of puzzle, then Picross e6 is a very fun game. But that’s a big if, and honestly Picross e6 would be a weird place for a Picross virgin to take the plunge. If you’re intrigued but have no prior experience of the series I’d recommend first trying out Mario’s Picross on the 3DS Virtual Console, which costs a meagre £3.60.

Rest assured though that once you get stuck into the Picross experience, you’ll never get enough of it. And that’s why Picross e6 exists, and is well deserving of a purchase. If this review has triggered a bout of deja vu, then that’s probably just because these games are all pretty similar. Don’t worry about it.