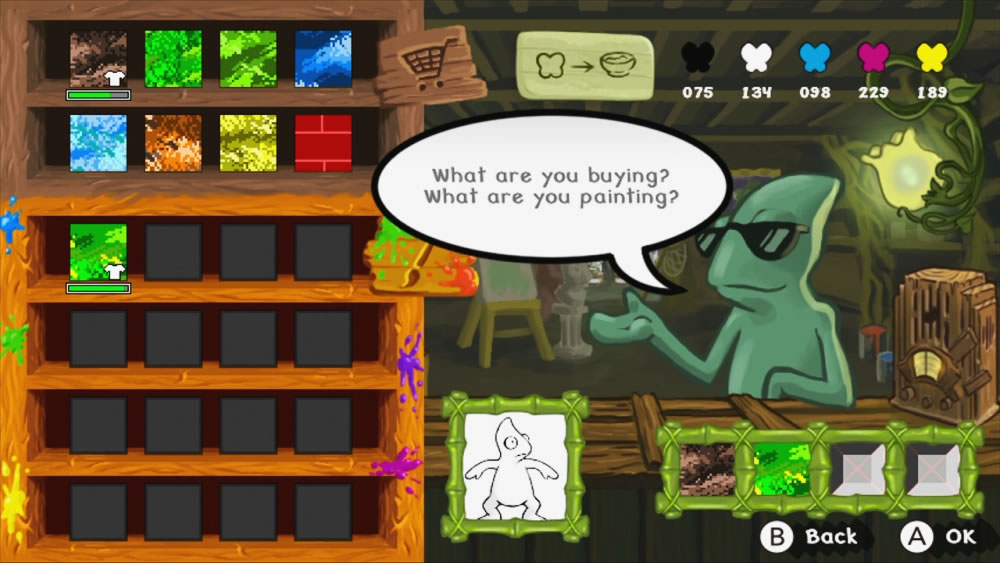 Canvaleon is an attempt at a stealth based platform game on WiiU. You play a chameleon named Canvas who has a birth defect which doesn’t allow him to change colour and camouflage himself. As an outcast all the other chameleons in the village (including his own family) turn their back on him, forcing him to live in isolation. This was until an artistic chameleon saw the potential of Canvas and realised that he can use his white body to create a living work of art.

It’s at this point where the game begins and the chameleons are exploring some old ruins in order to find butterflies to extract paint from. It’s here that Canvas witnesses an alien attack on the neighboring village. Many of the chameleons from the village have been abducted and placed into cells. Canvas takes it upon himself to rescue the chameleons that once abandoned him and get to the bottom of what’s going on.

At first glance ‘Canvaleon’ looks like a typical platform game. In fact it reminds me a lot of all the Sonic clones that immerged on the 16-bit consoles of the early 90s. Games like ‘Bubsy’ and ‘Areo the Acrobat’ that have lots of animal based characters and lots of collectables littering the terrain. Although this game shares a lot of similarities with such platform games, ‘Canvaleon’ is designed to be played in a very different manner.

The mechanic that makes this game different from most other platformers is the paint feature. By collecting butterflies you are able to mix together different colour paints which Canvas can use to camouflage himself and avoid detection from enemies. As well as a small selection of pre-made designs you are able to use your WiiU gamepad to paint your character in any way you choose. Doing so will enable you camouflage your character against any surface you like, providing you mix up the correct shades of paint.

The game puts a great emphasis on this mechanic and tries to encourage you to use it as much as possible. It’s designed to be played stealthfully and cautiously. At the end of each stage you are given a rank on how well you performed and takes into account how many times you were noticed by the enemy. In addition to this there is no health meter and you fail the stage after receiving one hit. Everything about how this game is designed is a reminder to take your time, be careful and camouflage yourself to avoid detection. Unfortunately this main mechanic has been executed very poorly. 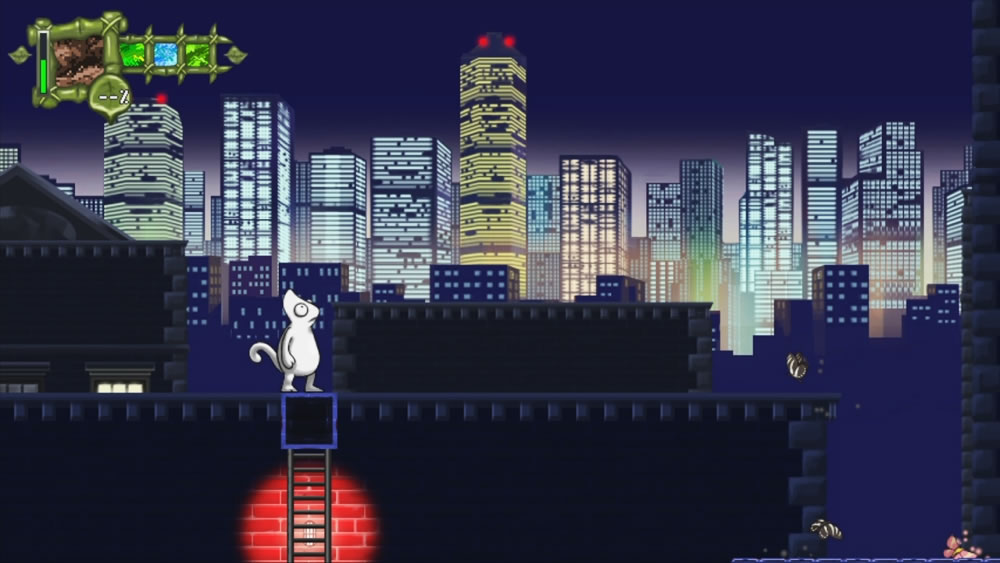 For a start the camouflage only works when you press a shoulder button which makes Canvas press his body against the background. In this state he can shuffle slowly from left to right but he can’t run or jump. Enemies usually have large fields of vision and can detect when you’re close or moving regardless of whether you are camouflaged or not.

I genuinely tried my best to play the game as it was intended but I actually found myself progressing further by abandoning the stealth mechanics completely and tearing through the levels ‘Super Meat Boy’ style. Since these levels are usually quite short I found that reacting quickly to avoid getting hit was more effective than trying to creep around slowly and end up getting killed anyway.

This is where the majority of the game’s problems stem from. It’s fundamentally flawed from the ground upwards. Personally I love the idea of the camouflage paint mechanic, but as I found it to be an ineffective feature in practice the game pretty much falls apart. I think the biggest problem comes from how the feature is implemented. You see an enemy in front of you, you camouflage, you sneak up on him as close as you can… and then what. You end up right next to an enemy that you can’t take down and can’t avoid. You’re better off just trying to take a run up and leap over him.

It’s difficult enough to make a stealth game in 2D. Slower paced games like Another World and Flashback handle 2D stealth quite well, but they are games with realistic body movement and functional equipment. They are naturally slower paced. They are not fast moving cartoon style games such as this one.

Regardless of how you play the game there is still some fun to be had here. You start off with quite a few different levels to choose from. The game has an over world map but rather than have the player start on one side traveling to the other you actually begin the game in the middle of the map. The variety of game worlds surround you and the levels get progressively harder the further away you get from the center. I think this is a great design choice and would be greatly suited to games where you need to explore around and find upgrades in order to progress to other areas. Sadly Canvaleon doesn’t seem to do this. 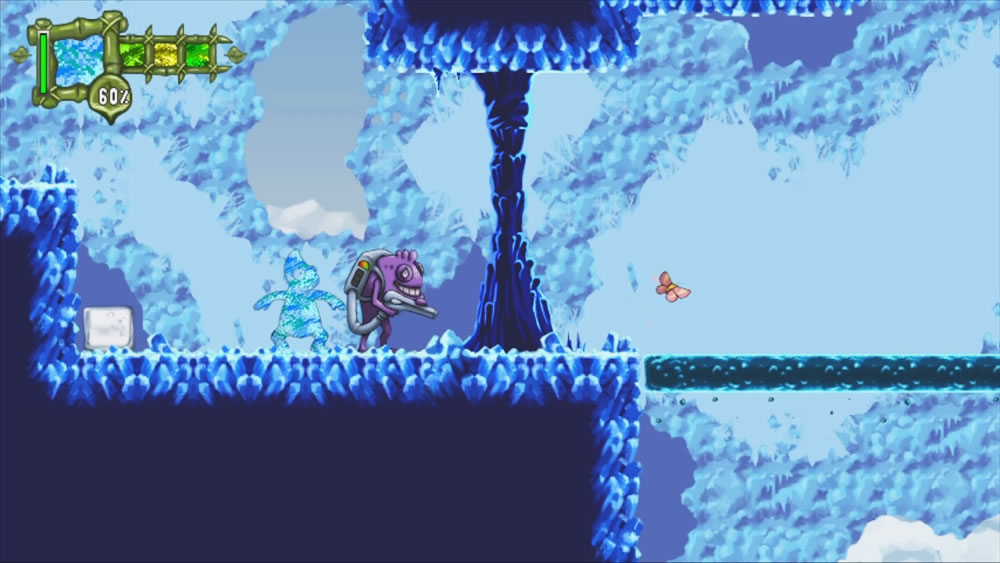 The game is actually presented rather nicely. The graphics and sprites are well drawn and give the game a retro tinge without it being deliberately pixilated / low res. The opening drawings and cut scenes look very appealing and I was particularly impressed with the alien invasion section which takes place in the background of a playable level. A nice way of combining story and game play. The sound in this game is ok and serves its purpose, but it’s nothing to write home about.

As nice as the details and textures are in the main game I did have a lot of problems distinguishing between what could be interacted with and what was background decoration as they all look the same. For example in the city levels you can use window ledges as platforms but you fall through the upper window frames despite them looking the same on screen. Also it’s possible to climb up certain pipes and vines when others are simply for decoration.

As far as the games functionality / user friendliness is concerned it’s a bit of a mixed bag. There are some things this game does really well like offering a large variety of languages and multiple control options which I was pleased to see. The game is only compatible with the WiiU gamepad which was a bit of a shame, however since you do need the touch screen to use the paint function I can appreciate why this is.

However, this game has one fundamental floor which really annoyed me, more so than the failed stealth mechanics. When I first sat down to try this game I struggled through as much as I could for a few hours, went to bed, and when I turned it on the following morning I was right back at the beginning. This game has no auto save! It’s 2015 and this game has no auto save! Yes, you can save the game manually from the pause menu, but when was the last time you ever had to manually save a game? The entire time I was playing I just naturally assumed that my progress was being recorded whenever I beat a stage. This wasn’t the case. I guess you could blame me for being spoiled by every other modern game under the sun that actually has an auto save, but for goodness sake, talk about an oversight.

I did carry on playing from the beginning but overall I was highly unimpressed. I wasn’t really enjoying the game much anyway and the fact that I had to start over due to poor design just made me feel worse. This game was a valiant effort in trying something new. I think fundamentally there was a good idea behind this game, it just wasn’t put into practice well. Better luck next time.