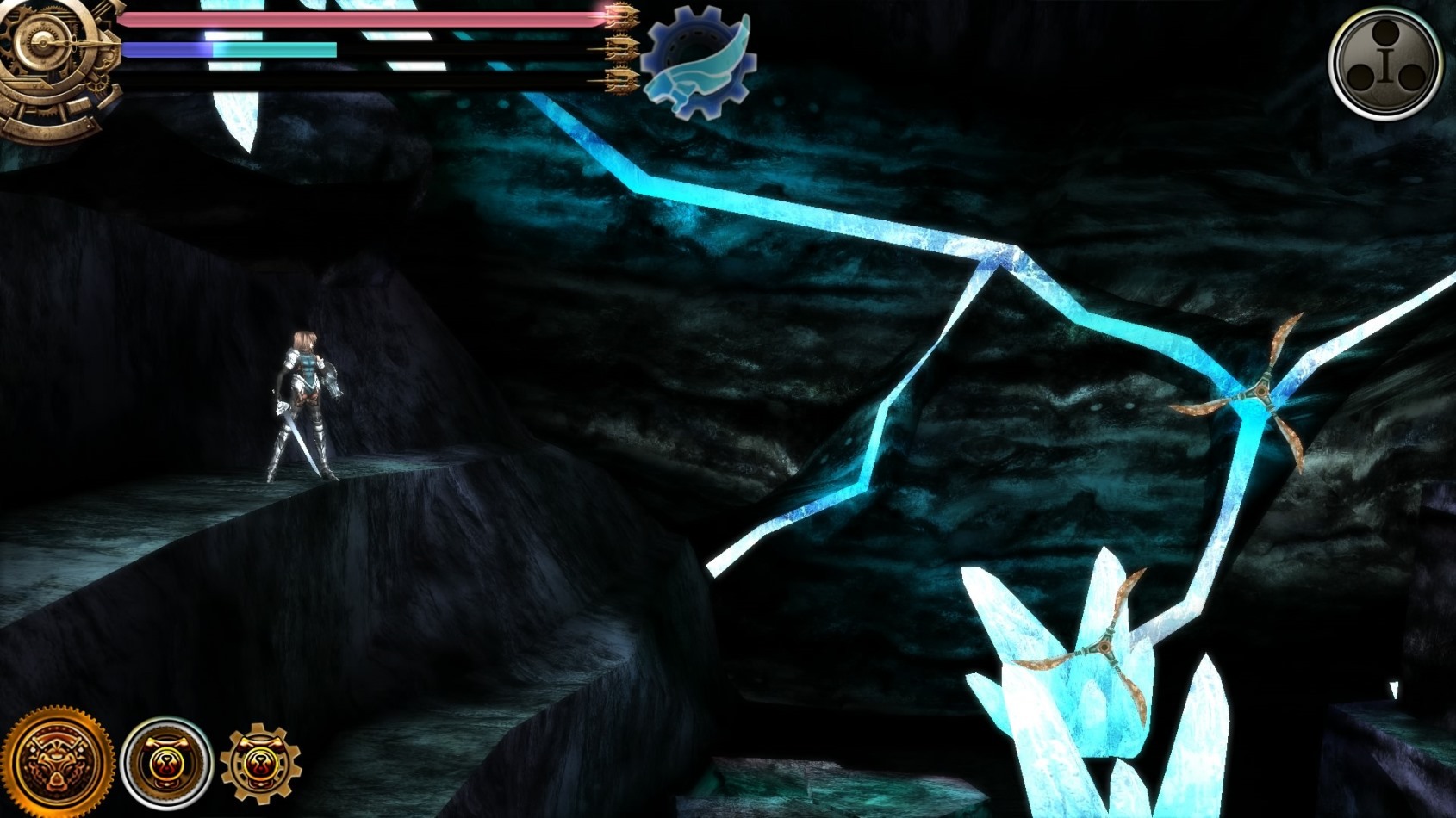 Aeternoblade is a valiant, ambitious, yet underwhelming action platform game from Corecell Technology. It was previously available on Playstation Vita and Nintendo 3DS is now available for Playstation 4.

You play as Freyja, a brave young woman who is seeking revenge against a demon named ‘Beladim’ who has destroyed her village and slaughtering her family. The plot is very straight forward and is expanded upon in a sequence of in-game cut scenes with lengthy dialog segments. Personally I didn’t find the story to be particularly engaging but that’s just down to personal taste.

It’s very difficult to define Aeternoblade as it’s a game that spans a lot of genres and recycles a wide variety of mechanics from other games. As you begin you run around the first stage hacking and slashing the hoards of enemies that surround you (note this is a 2D game with 3D graphics). Freyja’s sword slashes in a lovely smooth motion reminiscent of ‘Strider’ or ‘Ninja Gaiden’.

However not long after you begin your quest you are introduced to time altering mechanics such as rewinding time when you die or rewinding certain elements of the terrain. Mechanics ripped straight out of ‘Prince of Persia: Sands of Time’ and ‘Braid’. There are even elements such as switches and door that glow green if they operate of a separate time stream to the rest of the game. Again, this is a direct copy from ‘Braid’. These special powers are used to tackle platform puzzles and help you to progress through the various stages. 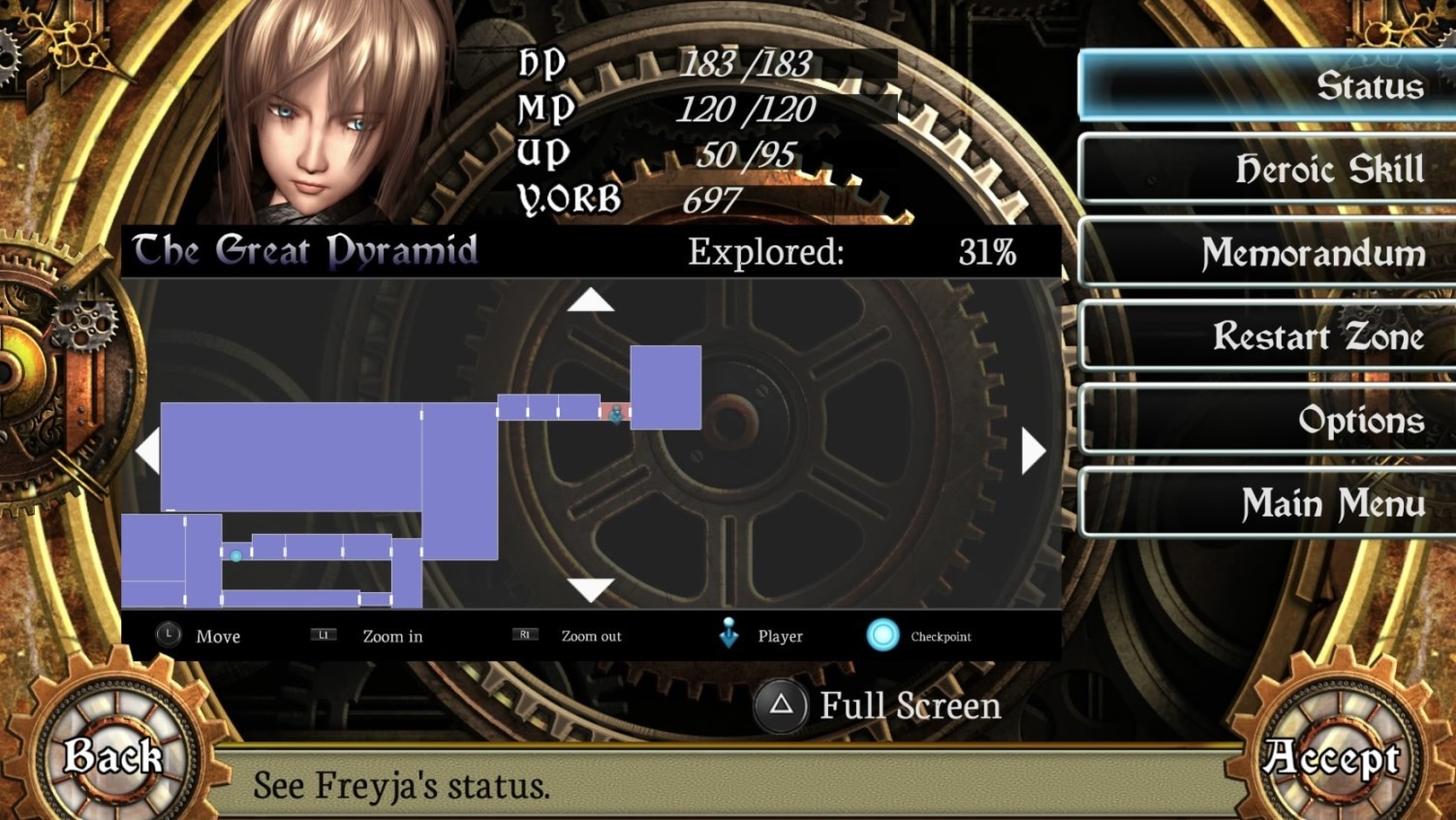 To top it off is the subject of stages. Although the game is split into conventional linear stages you do have the options to back track while equipped with the various upgrades and powers you find in the later levels, allowing you to explore earlier stages in new ways. Although it’s not strictly a fully fleshed out Metroidvania style game there are certainly Castlevania influences.

In addition to the various powers you can collect, there is also a very comprehensive upgrade system. It’s an RPG style system in which you can exchange yellow orbs (which act as currency) for improved stats and new combat skills. So in short it’s an action, adventure, hack and slash, RPG, puzzle game. A title with its fingers in a lot of different pies, but how well does it perform overall?

Well the first thing I noticed when I began playing was that I found the controls to be a little on the stiff side. The controls were comfortable and responsive however while you’re attacking Freyja cannot move. As soon as you hit attack she locks herself into place and you do not regain control of her until she finishes swinging her sword. Maybe I’ve just been spoilt by the most recent version of ‘Strider’ but this actually really bugged me.

For the majority of the game the combat was very satisfying, all be it not very challenging. Regular enemies do not pose too much of a threat and can be taken down by simple button mashing. There really isn’t a great deal of skill involved. Unfortunately to counter balance this I actually found the bosses to be quite tough, mainly due to the fact that Freyja really isn’t very mobile when she’s fighting. You can get yourself into a good position to fight the boss but as soon as you start attacking you leave yourself vulnerable as you have to wait for your attacks to end in order to dodge.

Aeternoblade’s real challenge comes from exploration and the platform puzzles, mixed with the time shifting mechanics. This was probably the most difficult part of the game as I found some of the platforming to be very precise. Since Freyja is a touch stiff to control you really need to be sharp in order to reach difficult ledges or to just scrape through the doors. I also had a bad habit of getting lost. 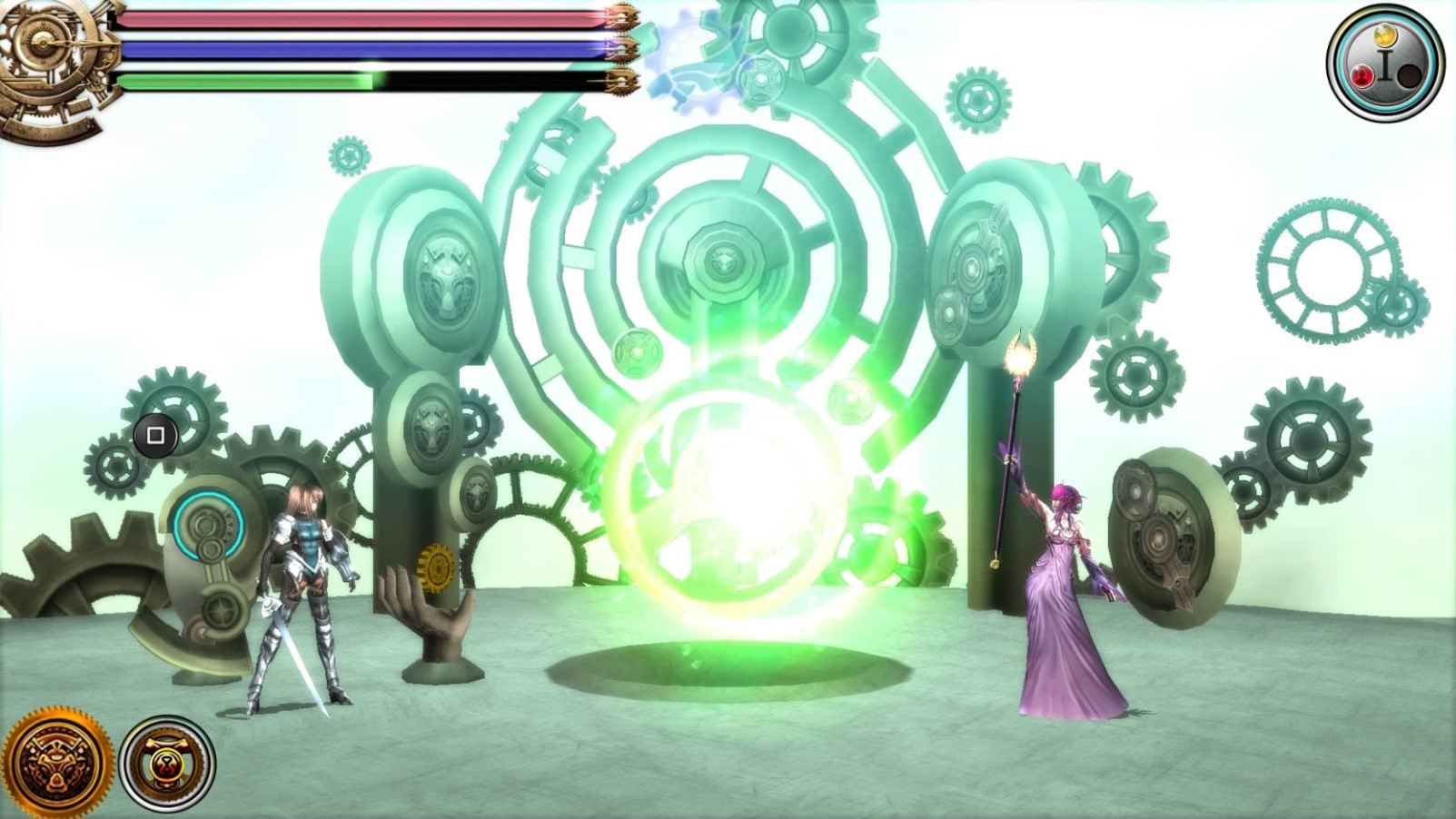 Overall the game’s presentation is pretty nice. The graphics are something of a mixed bag. There were times when I thought the foreground terrain looked a bit dull and lacked detail, however I was impressed by the interesting background architecture and landscapes. A lot of the characters and monsters reminded me of Castlevania, Altered Beast and Golden Axe. Many of the monster designs had a medieval theme although the artists have attempted to put new twists on classic enemies to keep everything looking fresh.

One element I actually enjoyed a lot in this game was the sound. Although the sound effects and music are nothing groundbreaking I did enjoy how music wasn’t used too much in the game, and when it was it was used to build suspense. There are a lot of areas in the game where you’re battling to ambient sounds, however when you encounter new or suspicious characters then really sinister music will creep into the scene. For a small studio I felt the production of the sound was very good.

Overall I admire the work that has gone into this game. The studio that made it has shown a lot of promise however I feel that this title may have been overly ambitious for them. The game incorporates many different mechanics and styles which in itself is impressive, but doesn’t really excel in any of them. It’s a ‘jack of all trades, master of none’ sort of a game. If you fancy something new to play on the go and you enjoy Castlevania style games then you may find some enjoyment here, but personally this game didn’t hold my attention for as long as it should. I also feel that the current retail price of £14.99 is a bit steep for what it is.