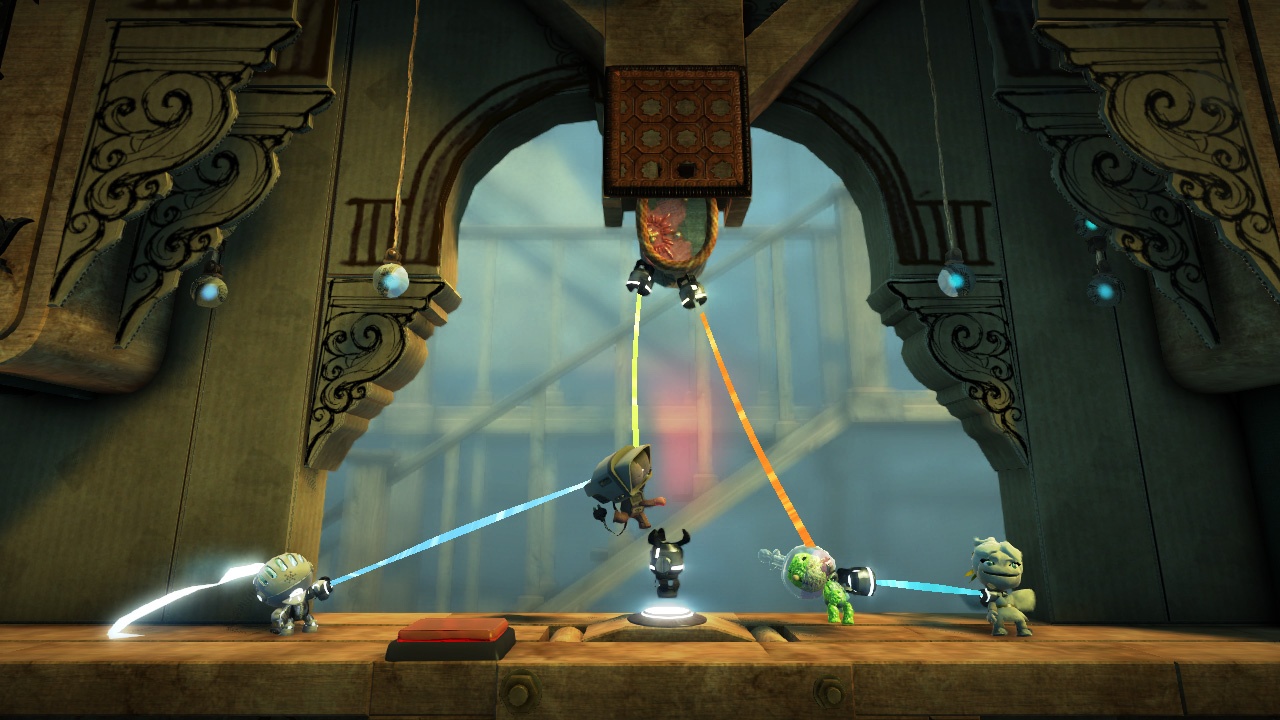 If ever a game didn’t require a sequel, LittleBigPlanet was it. With over 3 million levels created since its release a little over two years ago, it is essentially a game you could play forever. Ok, so quite a large percentage of those 3 million levels are a bit, well, rubbish, but there is more than enough quality user created content to keep Sackboy fans busy for years to come.

Still, business is business, and from Media Molecule and Sony’s point of view, a sequel to one of the PlayStation 3’s most beloved, critically acclaimed titles must have been something of a no brainer. So, here we are, LittleBigPlanet 2 is on the shelves and………it’s awesome. Well, I say awesome, but the truth is, like the original, the extent of said awesomeness will be intrinsically linked to the way you plan on approaching the game.

Just to be clear, even if you have no interest in the creative tools supplied and aren’t the kind of gamer to search through the inevitable influx of user created content, LittleBigPlanet 2 is still a great game and, despite its flaws, is arguably still the best platformer on the market without Mario in the title.

However, if you are the kind of gamer enamoured by the creative possibilities provided by Media Molecule and are eager to sample the finest work that the robust community has to offer, then LittleBigPlanet 2 might just turn out to be your favourite game of…..ever I suppose. Honestly, as great as the first game was, LittleBigPlanet 2 trumps it on just about every level. It may not be immediately apparent, but dig just a few inches below the surface and everything about the experience has been refined, streamlined and improved upon.

Now, before I wax lyrical about LittleBigPlanet 2’s mostly faultless design, I’m gonna jump straight in and deal with the games one major bone of contention: the controls. The floaty jumps, strange inertia and somewhat sticky scenery all return basically unchanged. The platforming is still solid enough and certainly won’t bother everyone, but for those hoping for Mario levels of accuracy, LittleBigPlanet 2’s core gameplay mechanics may prove to be something of a sticking point. 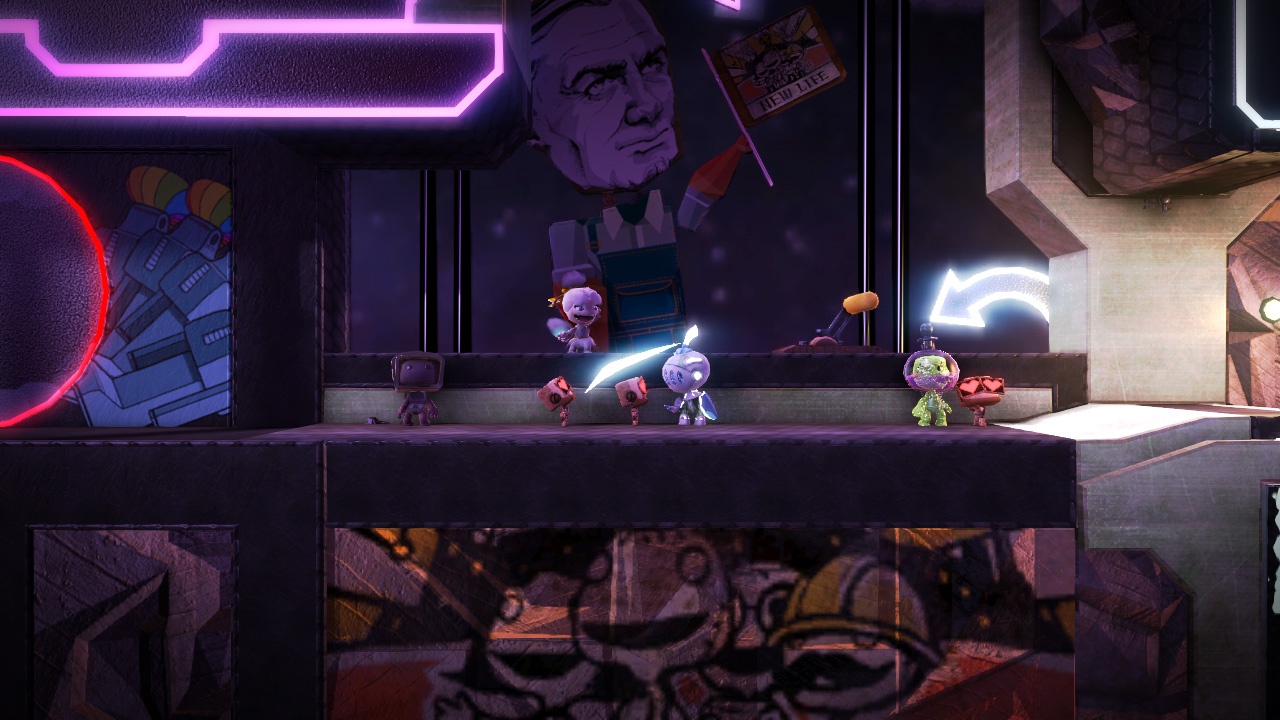 With that out the way, we can get to what LittleBigPlanet 2 does right – which just happens to be pretty much everything else. Although the presentation isn’t far removed from the original, with the patchwork visuals, whimsical soundtrack and Stephen Fry voiceover all making a welcome return, a few tweaks and a little polish have managed to improve upon the original’s near perfect audio/visual component in just about every department.

Beyond the obvious improvements to the LittleBigPlanet engine, it’s the imagination on display that really sets the game apart from its predecessor. Levels are now more varied than ever, the audio is improved vastly by the game’s music sequencer and improved track list, while the tool set on display is much more imaginative this time around both from a technical and artistic standpoint. The introduction of a narrative to the single player experience also helps to establish the game as more than a creative tool for its developers and community by better establishing the worlds created beyond the simplistic, if admittedly quite successful, themes of the original. More than that though, fleshing out Sackboy beyond his blank canvas credentials certainly gives both he and the extended cast far greater character this time around.

The criticism aimed towards the game’s controls and physics first time around seemed all the more damning due to the games reliance upon a reasonably basic platform-centric design, and while there’s still plenty of platforming to be done here, the more natural learning curve and especially the way and regularity with which Media Molecule mix up the gameplay mechanics serve to make any niggling issues you may have with the core mechanics much easier to bear.

And that brings me to arguably LittleBigPlanet 2’s greatest strength – its unbelievable versatility. Stemming from the massively improved creative tools, LittleBigPlanet 2 can seamlessly switch between numerous genre styles. You’ll find yourself doing a bit of traditional platforming one minute only to suddenly find yourself in a top down shooter the next. While this is fun while playing through the single player campaign, it’s when you take a look at the creative possibilities that you realise what both you and the rest of the world can potentially create – the possibilities are quite literally endless.

While the original had a fantastic set of tools that led to some truly unbelievable, often hugely unique levels, its sequel, while delivering far greater freedom, also manages to cut down the time required to create something genuinely impressive. I can’t stress just how major an improvement this is. As great as many user created levels were, the majority felt way beyond what your average Joe with an average amount of spare time could possibly hope to achieve. While the committed will once again go above and beyond, thanks to a collection of perfectly implemented tools and AI behavioural patterns, creating a potentially enjoyable, unique and ultimately cohesive level is a much more realistic prospect this time around. Still, while I’m sure the new ease with which levels can be created will see an even greater number of user created levels doing the rounds, it will once again be the ability and commitment of the few that will keep LittleBigPlanet 2 fresh and exciting long after the single player campaign has been extinguished. 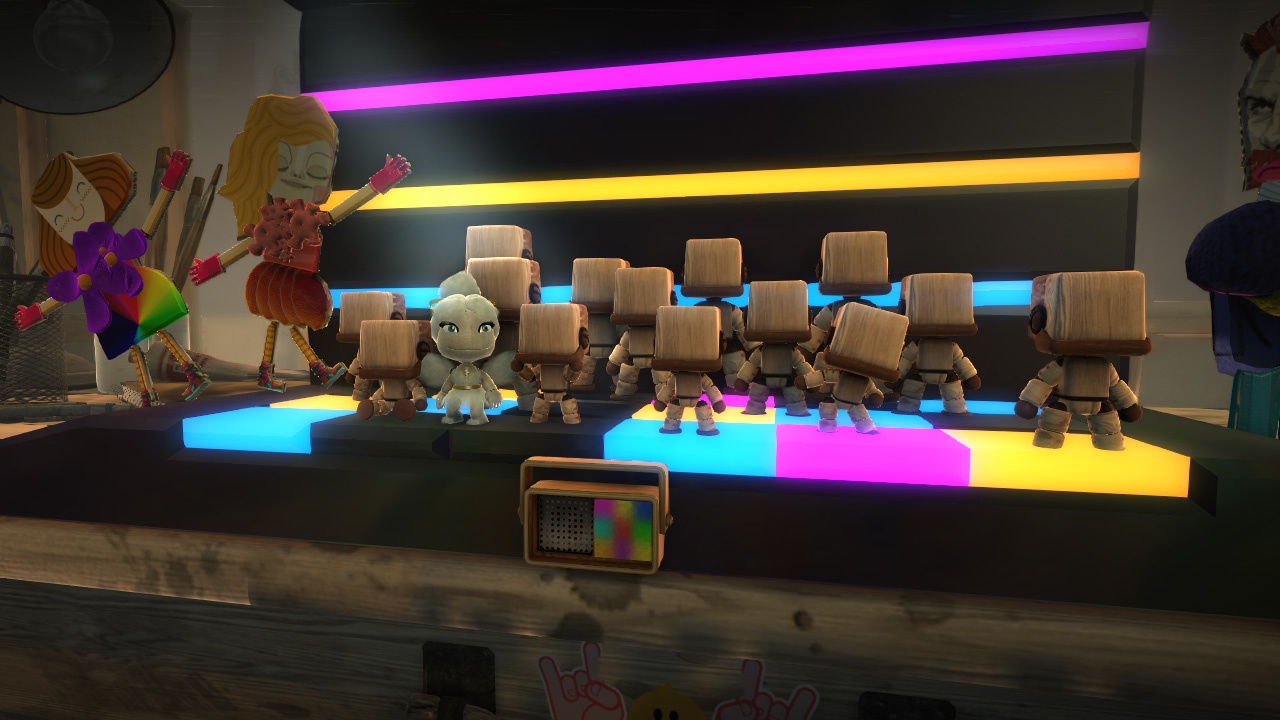 Despite the quality of the original, there is no doubt that the tool set in the sequel is in a whole different league. No longer are gamers vaguely constricted by platform mechanics, in LittleBigPlanet 2, just about any type of game can be created with enough time and effort; from top down shooters and RPGs to first person shooters and music games, LittleBigPlanet 2’s tool box is only as limited as your imagination.

On top of the tool kit’s unparalleled levels of versatility, the introduction of level link badges will give gamers the ability to seamlessly tie levels together, while the additional ability to create intricate cut scenes will allow for the potential for entire games to be created from scratch. Sure, we’ll see some amazing homage’s along the way but it will be very interesting to see whether some of the more advanced creators will be able to build anything that will be able to rival the game’s single player campaign – now wouldn’t that be novel.

Of course, attempting to take on Media Molecule’s finest is going to take a whole lot of skill and effort but thanks to the introduction of new tools such as the Creatinator and Sackbots, creating something that can realistically rival Media Molecule’s own work in terms of quality, imagination and polish might not be such an unrealistic prospect. The Creatinator, a customisable helmet that can shoot all manner of objects, makes populating levels much easier, while the Grabinator allows you to pick up and toss items at will. Both work fantastically as extremely useful additions to the tool set while also delivering great twists to the core gameplay. Then there are the Sackbots. These little guys are visually reminiscent of the mini Mario’s from Mario vs Donkey Kong but like every aspect of the game prove to be extremely versatile. While they can be herded along in much the same was as Mario vs Donkey Kong, the Sackbots can also act as enemies, guides or AI inspired challenges that add another dimension to both the single player and creative tool set. Oh, and they’re super cute to boot.

When the original LittleBigPlanet was released, a certain leap of faith was required – would there be a committed community to support the game? Would user created levels turn up on a regular basis? Would the levels be good enough to genuinely extend the game’s lifespan? Well, no such leap of faith is required this time around. There will be a huge, extremely committed community ready to make the most out of LittleBigPlanet 2’s tool set from day one. Based on the level of quality user created content found in the original and the unbelievable possibilities that the new tool set provides, expect some truly outstanding creations to appear in the coming months. As fantastic as LittelBigPlanet 2 is now, it’ll be amazing to see what it has become a year down the line.