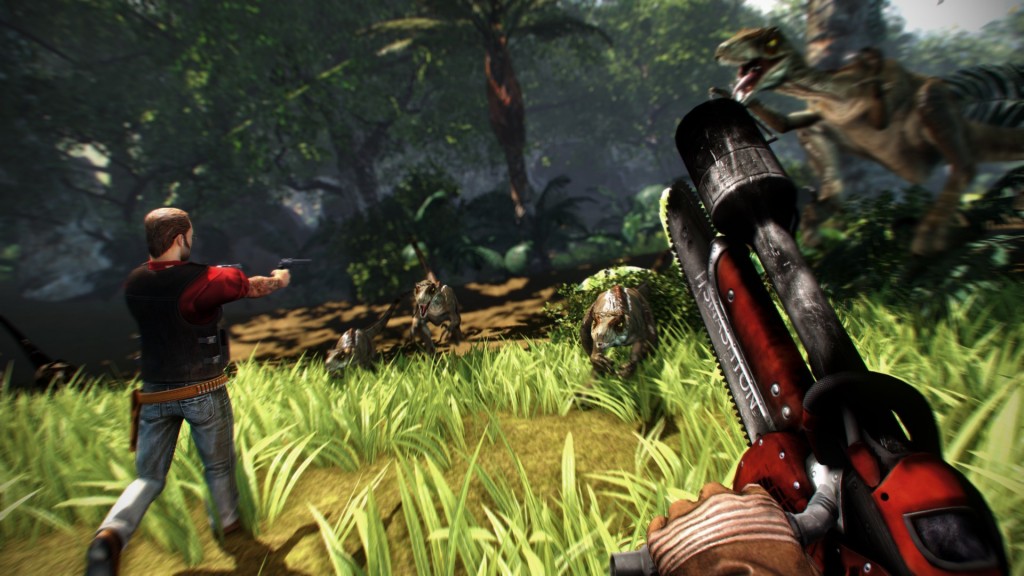 Jurassic World has done nearly 1.7 billion dollars at the global box office, everyone loves dinosaurs and yet, no video game. Five, ten, fifteen years ago, a horribly mediocre movie tie-in would have been all but assured, but nowadays, the video game and movie industries are far less intertwined with any potential tie-in usually relegated to some dodgy mobile game that 99% of the ‘core’ gaming audience couldn’t give a monkey’s about. While that is fine in theory (after all, who needs another E.T. the Extra-Terrestrial or, God forbid, Street Fighter: The Movie), the accepted theory that dinosaurs are awesome combined with the bizarre lack of dinosaur themed video games has left a large and somewhat inexplicable hole in the market.

Well, that hole has now been filled (is that sentence acceptable?) with, sadly, the rather mediocre dinosaur themed shooter, Primal Carnage: Extinction. The whole ‘mediocre’ thing might sound immediately disappointing, and to an extent it is, but despite, Primal Carnage: Extinction being far from great (or even good by traditional standards), that doesn’t mean it isn’t without merit.

Primal Carnage: Extinction is one of the games that, while fundamentally flawed, remains largely entertaining despite its array of technical issues, complete lack of balancing and disappointing shortage of content. If you’re looking for a shooter to really sink your teeth into (no pun intended), this isn’t the game for you, but for those looking for a bit of short term, dinosaur themed fun, well, this janky but surprisingly likeable mess might well be worth a look. 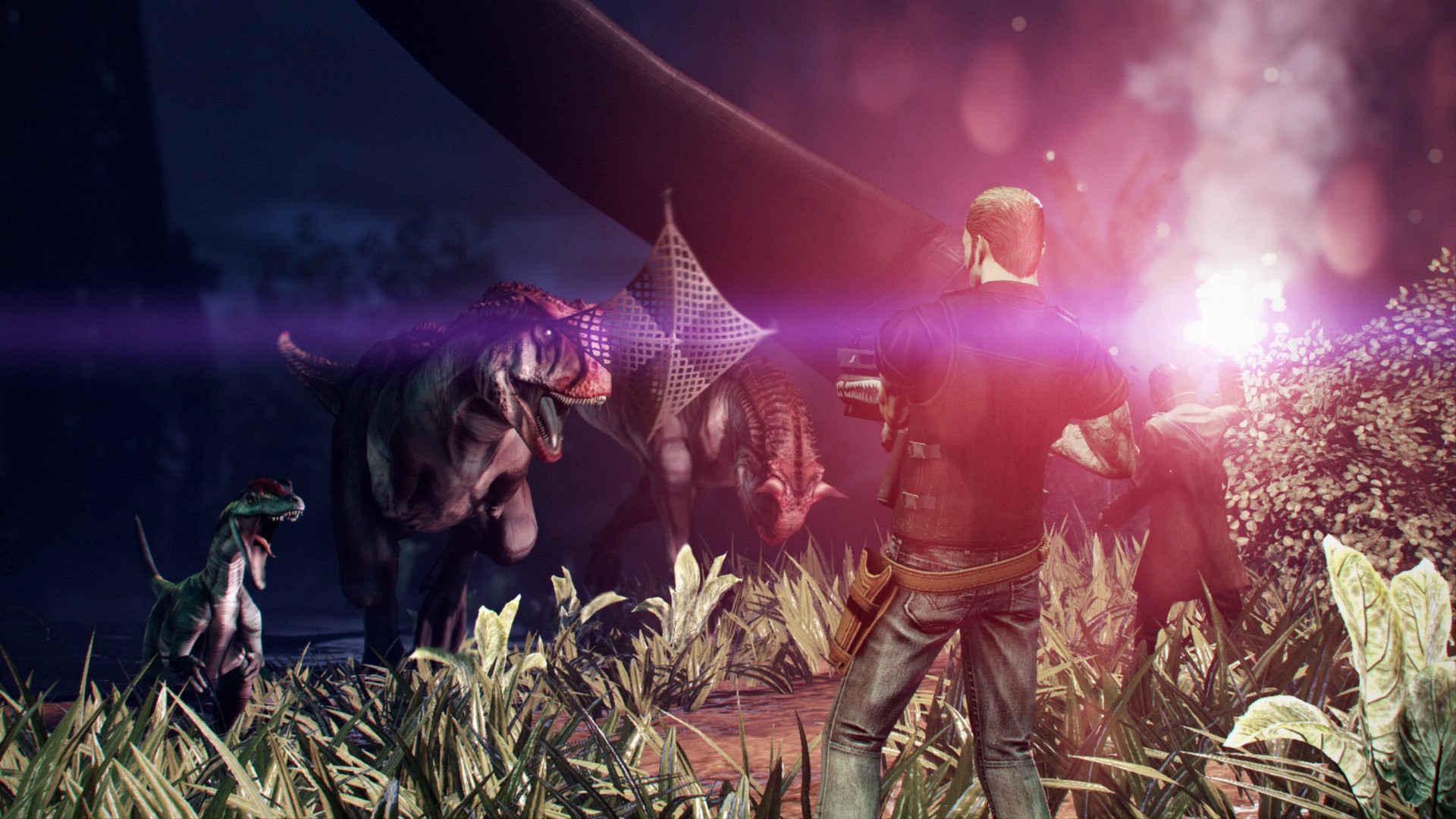 Despite the fact that this game is something of a technical mess, the one thing it does extremely well is the dinosaurs. They look great, they play great and they’re even pretty fun to play against. The game is horribly imbalanced towards team dino, but even this feels oddly right given the fact that, well, I’d have my money on the dinosaurs too. Sure, those looking for a fair and balanced shooter will find the uneven abilities infuriating, but if you approach this as a short-term bit of online fun, playing as team human can actually be just as fun as playing as one of the many dinosaurs available for selection.

Sure, none of the characters or abilities, despite the inclusion of numerous unique classes, make that much of a difference, but the gunplay is sound, and the fact of the matter is, the game just feels different. In a world of military and sci-fi shooters, playing as or against dinosaurs feels pleasantly unique. It’s the kind of idea that you can’t believe hasn’t been done more often, and given how much fun this decidedly ropey game is, it’s hard to imagine just how good a dino-infused shooter might be if it were developed by one of the genres big boys. Still, this is what we’ve got, and for now at least, I guess it will have to do.

The human classes, that include the usual sniper and assault types along with a more imaginative flamethrower wielding lunatic sound great on paper, but in reality, the differences are more limited than you would imagine, and while the dinosaurs certainly offer up some decent variation in the form of fast-paced raptors, air-based flying dinosaurs and huge T-rex and Spinosaurus, the lack of any sort of balancing makes the whole experience feel like something of a messy free-for-all. As I said before though, dinosaurs are fun, and playing as them arguably represents the games’ highlight. Be it a raptor or a T-rex, chasing down often painfully underpowered human foes is a huge amount of fun……for a while. 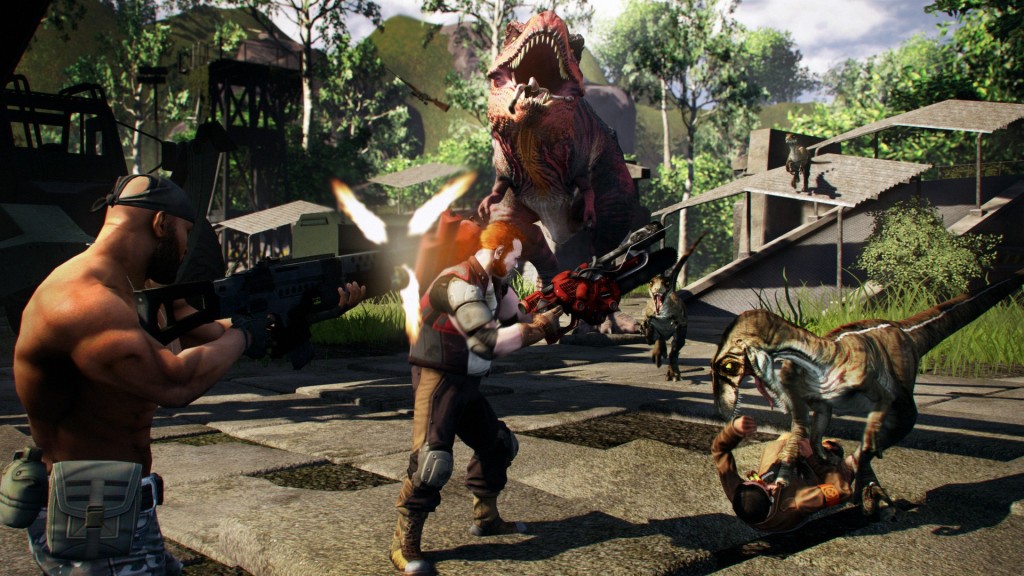 And that’s the thing – as fun as it is playing against and as dinosaurs, after a while, the cracks begin to show and the brutal lack of content really starts to take its toll. The fact is, despite the strong central premise, this really isn’t a very good video game. Fun sure, but good? Well, no, not really. The visuals are decidedly low-rent while the art design, something that can save even the technically weakest of games, really doesn’t do enough beyond delivering a solid selection of Jurassic carnivores. The gameplay is never actively bad of course, but the lack of any discernible balancing combined with the low number of game modes combines to create an extremely limited experience.

Not bad for as long as it lasts, Primal Carnage: Extinction nonetheless wears out its welcome pretty swiftly thanks to the complete lack of single player options, the rather paltry three multiplayer modes, and the disappointing absence of a tangible sense of progression. The moment to moment gameplay isn’t bad, but take the dinosaurs out of the equation and this online only shooter would hardly be worthy of mention. Still, it does have dinosaurs, and in these dino-light times, their inclusion does make this otherwise mediocre shooter a strangely compelling proposition. It won’t keep you entertained for all that long, but while it lasts, this class-based online shooter delivers an oddly entertainingly, if undeniably average experience.