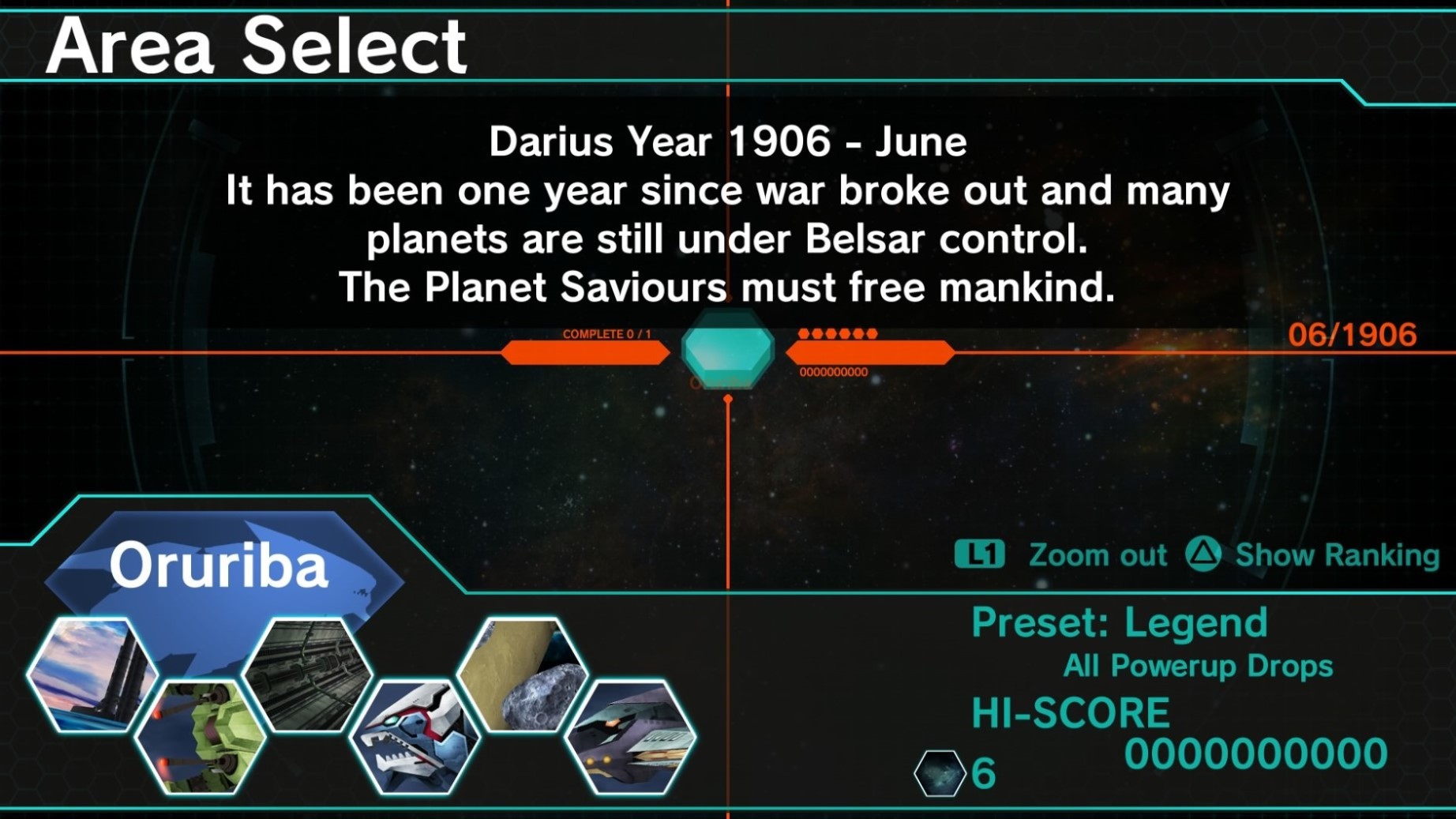 The Darius series has become one of the flagships of the arcade shoot-em up genre. I first played the home console versions on the Sega Saturn and since then have always held it in high regard. I still sucked at it though, and that one fact never changed through the various iterations that followed.

It’s been a long time since I’ve played a modern side scrolling shoot-em up (affectionately dubbed, shmups) so getting the opportunity to add Dariusburst: Chronicle Saviours to my Steam collection was something I didn’t want to miss. It’s not exactly new per se, but rather a remixed PSP game from 2009 developed by Pyramid and released only in Japan. For its upgraded release on PS4, Vita and PC, the developers have slapped on a campaign mode as well as dual monitor support for the Windows version. Other than that though, it’s still Darius; responsive, chaotic, extremely difficult and just a wee bit surreal.

Players scroll vertically through each stage blasting everything in their path until the end of the map where a huge boss battleship appears, which usually takes the form of a giant fish or other aquatic creature. Kill this dude, pick another stage and that’s the bread and butter of the Darius experience. Hardcore fans will expect nothing more, but with a pretty steep price, it’s disappointing not to see any real effort to propel Dariusburst onto the radars of potential new fans. 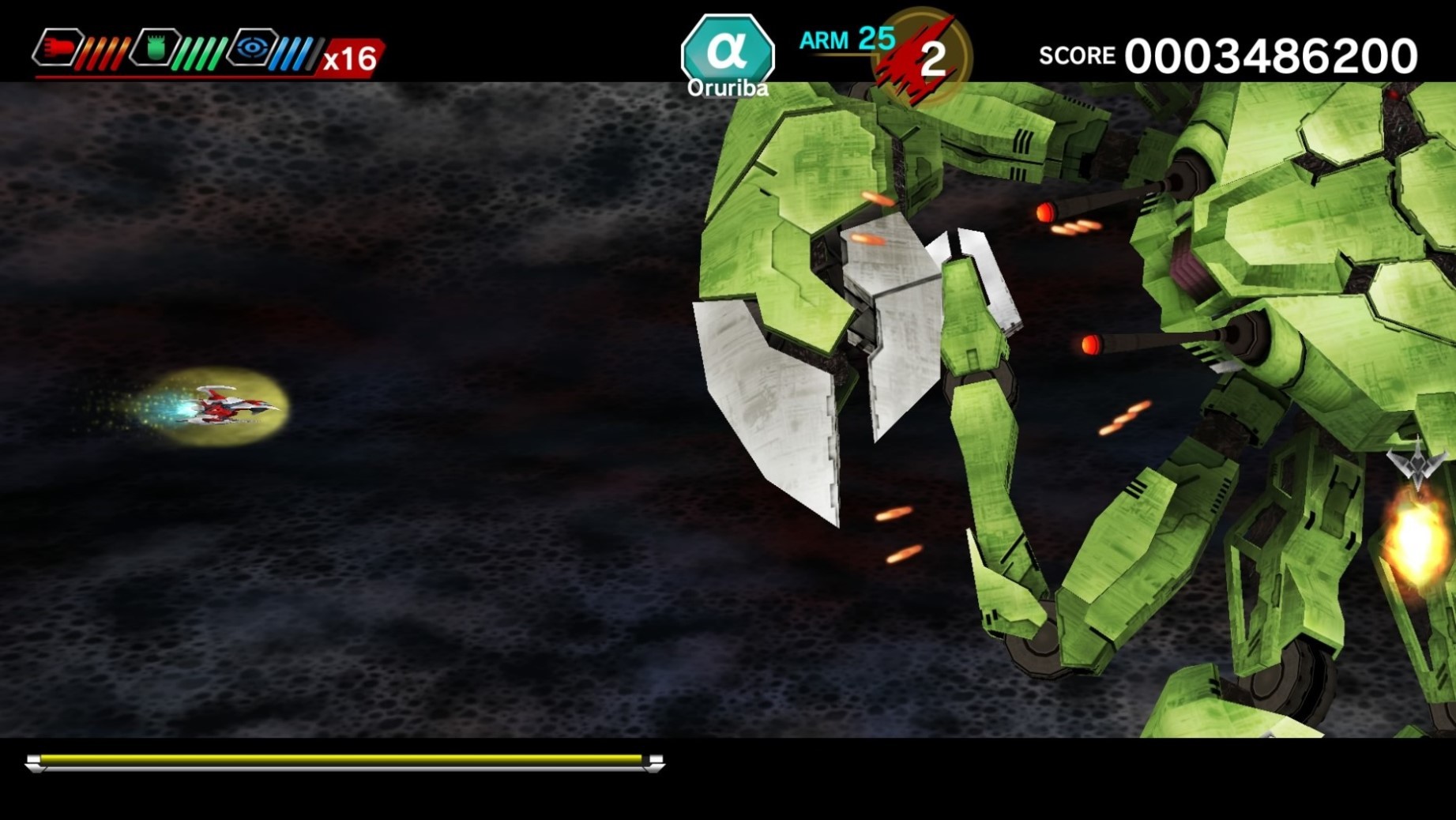 The arcade (or AC mode) is a remixed home version of the arcade game displayed in a super widescreen format that gives you a great tactical view of the battlefield. Campaign, on the other hand, sports a more zoomed in display that uses more of your screen but restricts your field of view. Because of this, I found switching between the two modes really hard to get used to as I just felt at a constant disadvantage in the campaign after playing arcade with a much improved field of view. The option to play both modes in the same format would’ve been nice. Hell, there might even be a way to do it but as of yet I haven’t discovered it. Just like the rest of the games features, they aren’t illustrated very well and there’s not a tutorial or introductory note in sight.

It’s pretty much common sense for the most part though – You can change direction in-flight to zap troublesome ships or turrets assaulting your rear, and collecting coloured orbs will upgrade your lasers, missiles and shields until you’re truly a force to be reckoned with. Your burst attack can be deployed whenever you want, but is subject to a significant cooldown period. However, how long it lasts once it’s fired depends on the multiplier amassed from dispatching loads of enemies with it. All this could count for nought though if you don’t have the finesse to deftly navigate the perilous surroundings while avoiding enemy fire. It’s hard, but with a little practice, you’ll really surprise yourself with how your skill can improve… 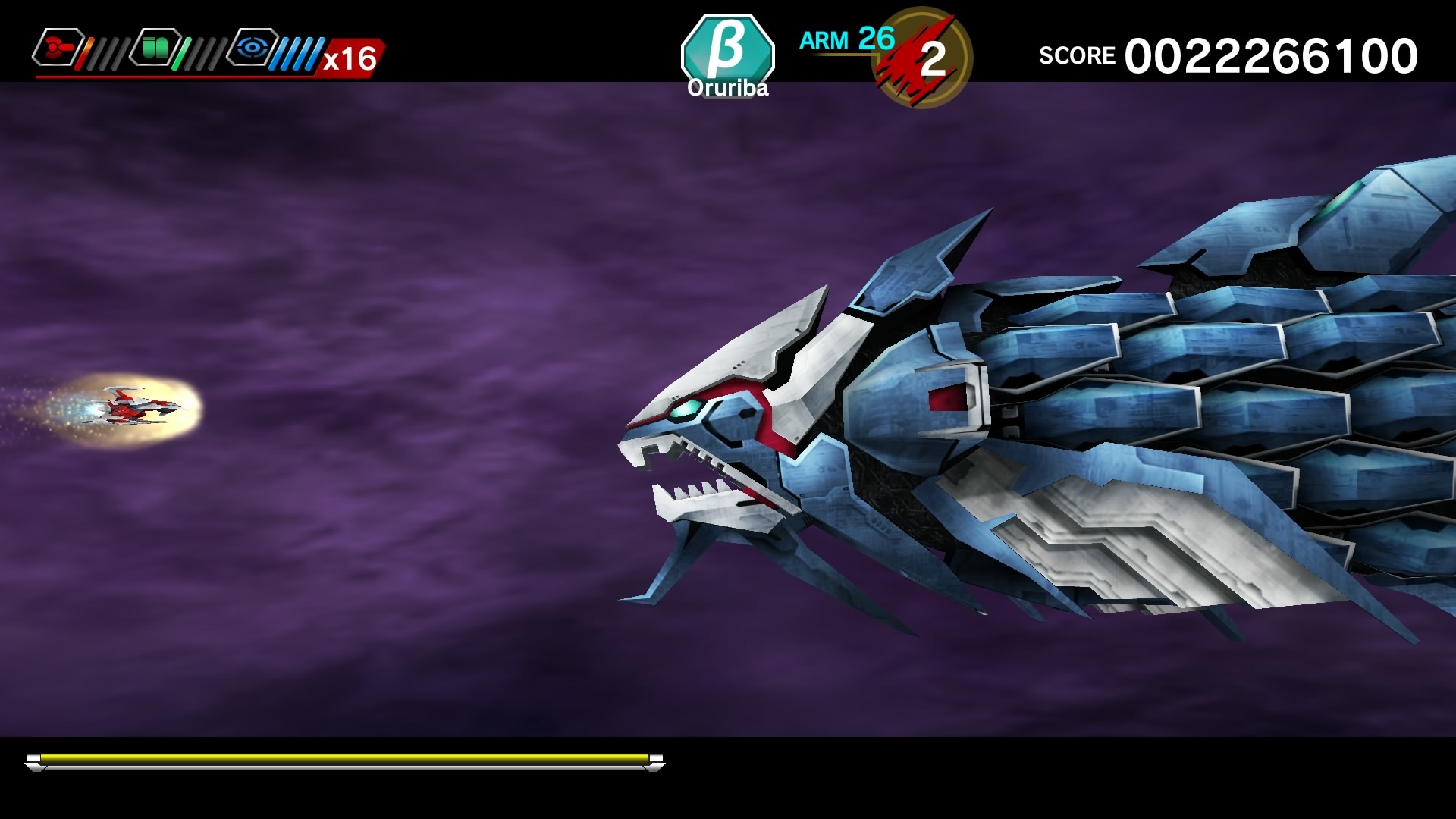 And you’ll need that skill, because there’s a seemingly endless amount of stages that offer decent value but can also be quite deceiving; Some stages are very similar with recycled bosses and enemy waves, and I’m convinced that some missions are even totally identical. Also, to get the most out of the game, you’d either need a few friends to take advantage of the local multiplayer or you’d need to be super skilful on your own. Simply passing stages isn’t enough when you realise that to unlock specific ship upgrades, you have to completely smash some really lofty default high scores.

Without getting too involved however, Darius (and other games like it) have always appealed to me for their ‘easy to play, difficult to master’ nature. The gameplay gets repetitive, but it’s incredibly addictive and just plain fun when it wants to be. It looks great too with animated backdrops, 3D enemies and beautifully designed bosses to boot, so if it’s more Darius you’re after or just some good old arcade goodness, you could do a hell of a lot worse than this.