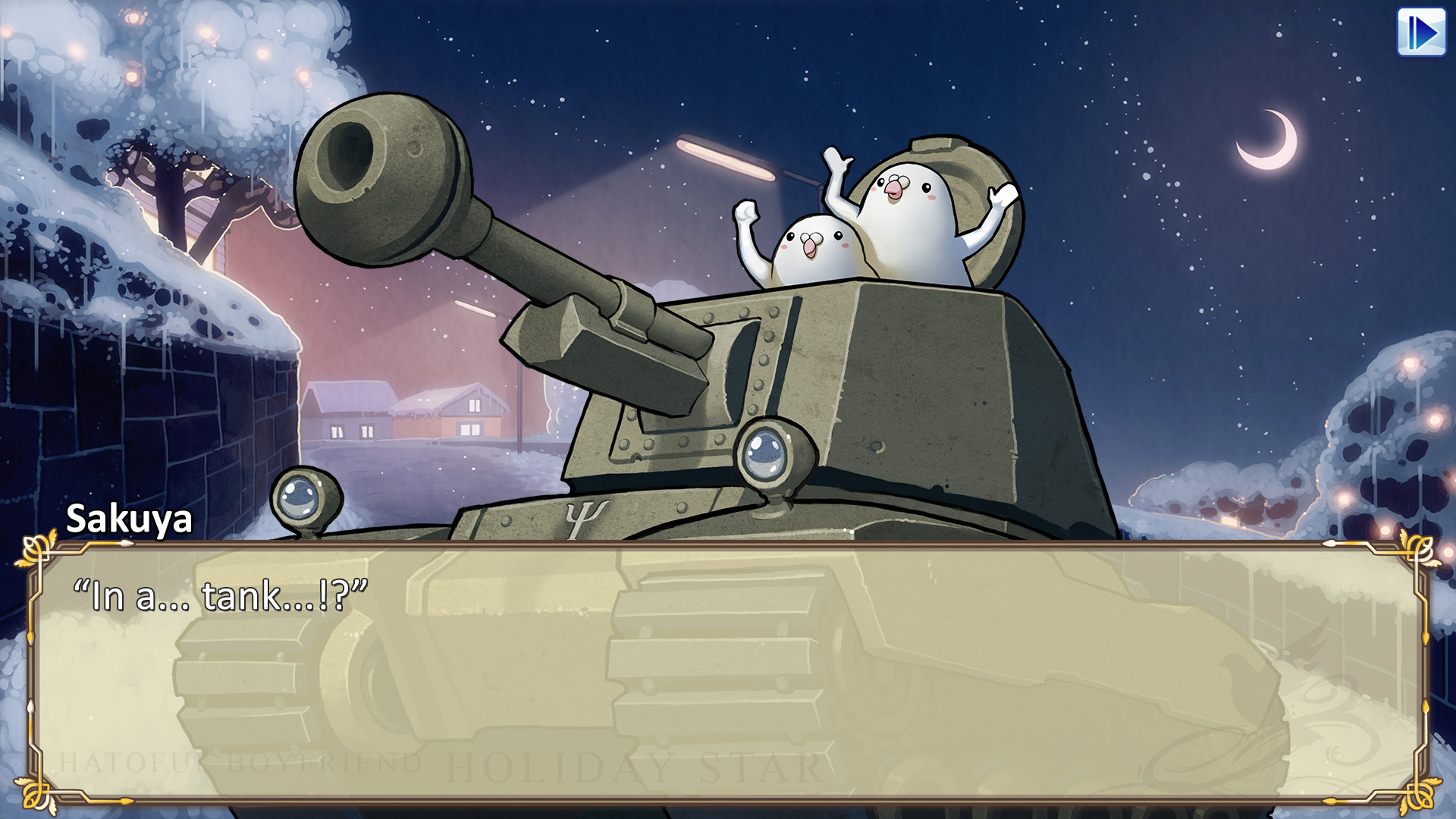 A few months ago I had the task of playing and reviewing the first Hatoful Boyfriend game and I ended the review explaining how I would not be playing it again – yet here I am reviewing Hatoful Boyfriend: Holiday Star. Holiday Star is a sequel to the Japanese pigeon dating simulator and while it’s different enough for me to have played the entire way through, it’s not different enough for me to have actually enjoyed the game.

You’re back playing as the same hunter-gatherer teenage girl as before with some familiar birds flapping around throughout the story. While the previous game was a dating simulator and your aim was merely to make your way through the school year and fall in love with a bird, Hatoful Boyfriend: Holiday Star brings a bit of a twist to the series by introducing the mystery genre. The entire aim of the game is to find out who is stealing the city’s Christmas Trees and while it does start as quite an interesting plot line, the mystery is given away in the first few scenes to the player (if they’re smart enough to figure it out and to be honest, a real pigeon could have figured it out.) I’m sorry, I tried to like the game, I tried to go in with some sort of an open mind but it’s difficult when I didn’t like the first game and honestly this one was just boring. 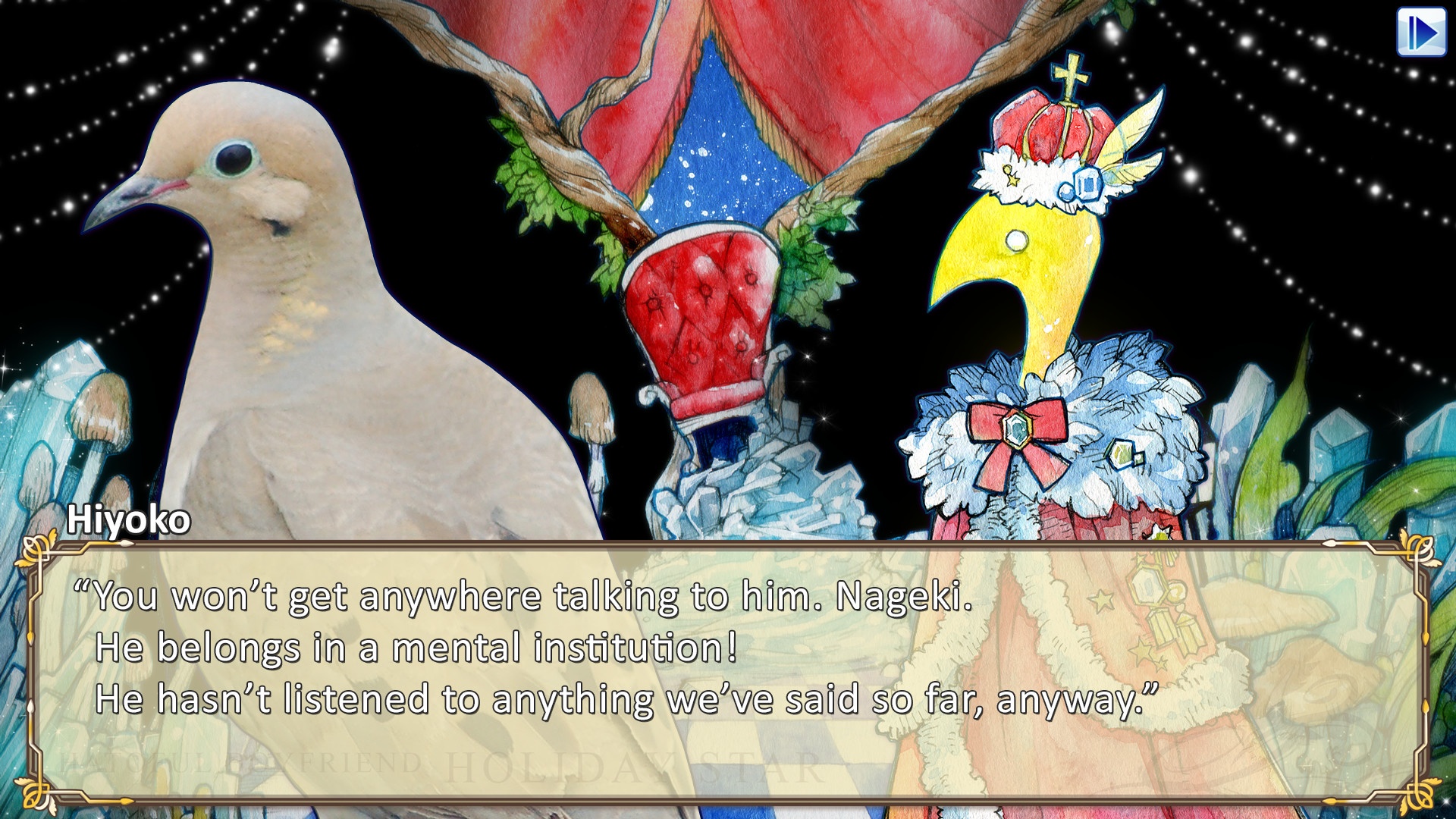 The first game gave you a variety of plots you could go through and even encouraged the player to go back and play through the game again in order to find out more about where they were, who the characters were and just the different ways the story could have gone – Holiday Star didn’t do this. There was a pretty much linear path through this game with barely any options on what to do. It was just like reading a story rather than playing a game – a dumb story at that. I’m all for creative differences – people can create what they want and I’m completely open for that to happen but I just cannot deal with another Hatoful Boyfriend game.

The graphics were exactly the same as the last game, except for the addition of some obnoxious pop-art type graphics whenever your character shouted – which made me dislike the protagonist even more after her newly obnoxious nature. It was based in the style of anime, except this time round there were no human versions of the birds to look at – I guess the developers assumed that if you’re sitting there playing Holiday Star that you would have played the original game. I personally can’t imagine someone playing it if they hadn’t. The music was basic but soothing. It was the same style as the last game which is fine by me, the soundtrack’s simple nature made the game more bearable. There was the addition of Christmas songs stuck in there too during some scenes which matched perfectly with the setting and some tense sounding music during the more dramatic scenes. The soundtrack and the graphics weren’t spectacular, but they all work with what the game is. 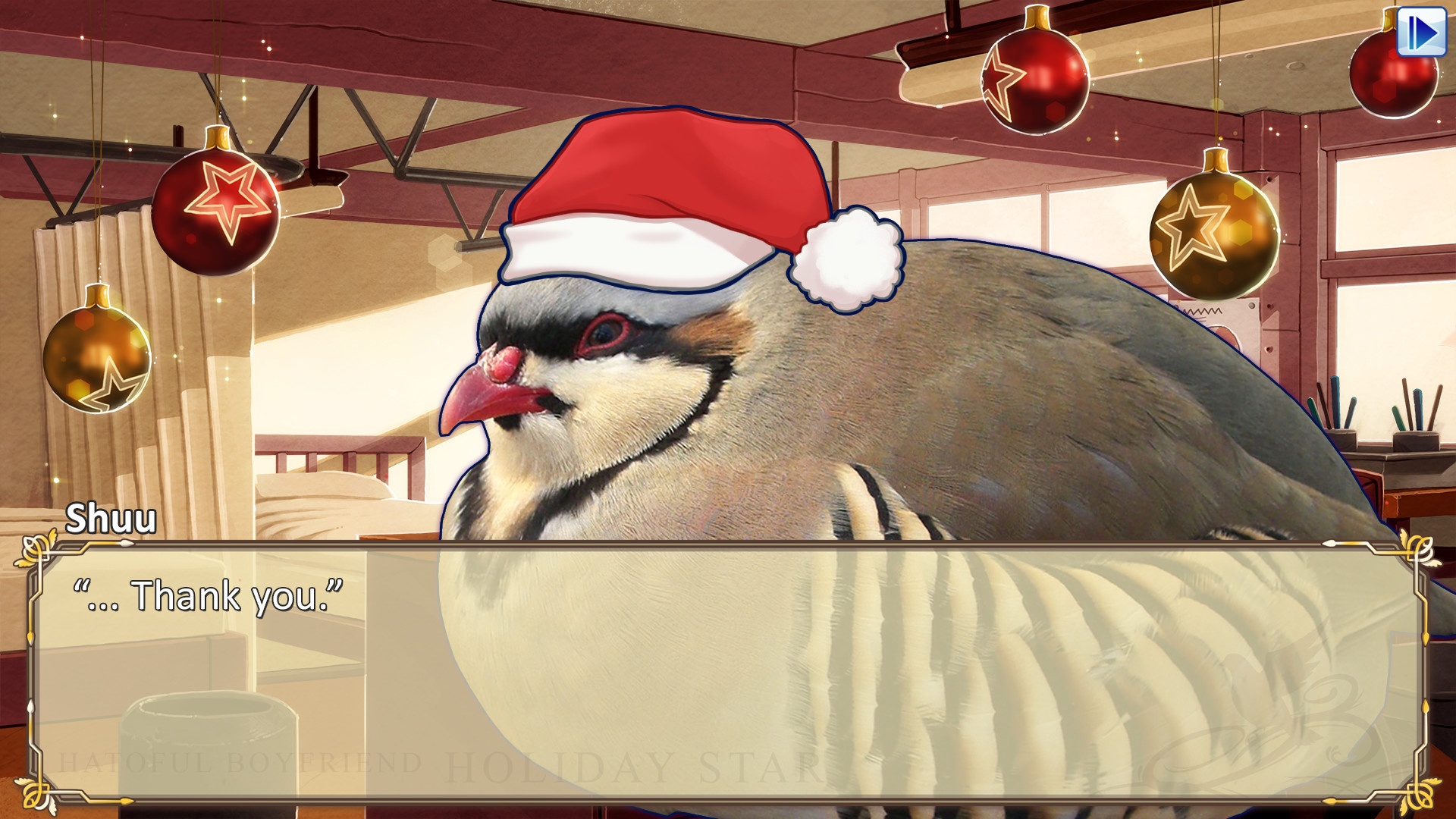 I hate being so negative about anything I review, but I can’t recommend this game. The first game was quirky and so bad it was funny and enjoyable while this sequel just isn’t. It’s repetitive, boring, has dull dialogue and isn’t fun. I found myself using the fast-forward button more than once – and frankly if a game feels the need to include a fast-forward button I think it says a lot about what the developers expect from the players. I wasn’t interested like I was with the original and I’m sad that Hatoful Boyfriend: Holiday Star seemed to just rehash ideas from the first game. It’s clear that this sequel was made because of the weird success achieved by the first game except there just wasn’t any effort. I’m disappointed in how substandard it was. ‘Everybirdie’ should simply fly south for the winter, and stay away from this game.

The first game was quirky and so bad it was funny and enjoyable while this sequel just isn’t. Everybirdie should simply fly south for the winter and stay away from this game.