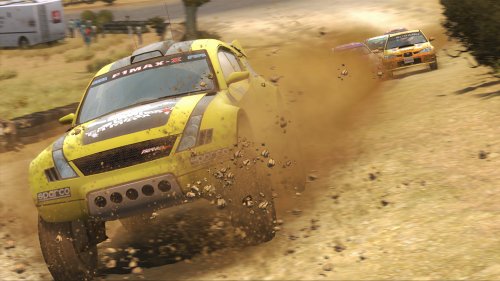 Having recently re-found my love for all things PSP thanks to a somewhat impulsive PSP Go purchase, I’ve decided to go back and review a few of the classic games available on PlayStation Network based on today’s standards and , more importantly, today’s prices.

The first on the list is Sega and Bugbear Studio’s, Sega Rally. Now, being a huge fan of the criminally underrated 360 and PS3 iteration, the only reason I didn’t buy this back in 2007 was for fear that it would be too similar to its console counterpart, a game that I spent months playing, and that it would not provide enough content to justify the £29.99 price tag. Well, its a few years later now, I haven’t played the 360 version in a long time and I’m totally ready to get back into the brightly coloured world of Sega Rally. If it was basically a scaled down version of the console release, I’d get over it as, to be honest, I’d now be more than happy to re-visit that game while sitting on the bus and if there wasn’t a great deal of content, well, it’s £7.99 on the PlayStation Network – that’s infinitely more forgivable when the game costs the same as a couple of pints of lager.

The thing is, it isn’t hugely removed from its console counterpart (obviously not a problem if you haven’t played it) and yes, it is a little shy on content, but as I said, at £7.99, that isn’t nearly as big an issue as it was back in 2007. Anyway, we’re talking about Sega Rally here – this was never a series that prided itself on the amount of content available; it has always been the quality of what is there and the huge levels of replayability that each track provides, and in that sense, Sega Rally on the PSP is a huge success. 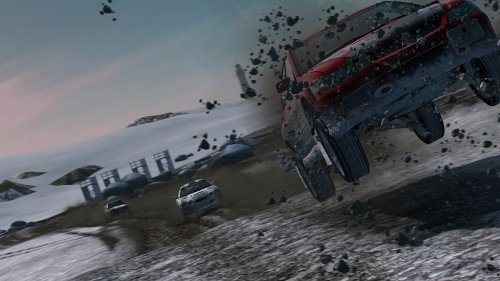 Saying that, there are 16 tracks available which are separated out into 6 different environments, so it’s not like there is a complete lack of content here. The majority of modern racers do have more tracks but I can guarantee that few will be as memorable or as fun to play as those found in Sega Rally – each track feels carefully constructed around the games famous corner sliding gameplay with numerous wide turns and quick changes in direction allowing players to show off their skills on a regular basis.

Of course, all the great tracks in the world won’t count for much if the handling model isn’t up to scratch and while some will (and already have) argued that Sega Rally on the PSP is a little too sensitive, I found it to be perfectly fitting for a handheld racer and for the most part, hugely enjoyable. Those who have played the console release will be especially surprised by how much lighter the cars feel and how much easier they are to keep on the track, and while this inevitably reduces the level of challenge, it does give the experience a certain carefree charm that was perhaps lacking from its often hard as nails console counterpart.

As much fun as the cars are to drive though, due to the games reluctance to punish drivers for scraping along the edge of the track, races can be a largely challenge free affair – regardless of whether you have got to grips with the handling or not. The other problem is that while the other races do tear of into the distance at the start of a race in that traditional Sega Rally manner, they are far too easily reigned-in over the course of the first two laps, often leaving the final lap to be something of a stroll in the park. This will inevitably prove a problem to some but I was far too busy enjoying the classic Sega Rally gameplay to really care. Plus, if you’ve spent as much time as me cursing at the lightning quick, fault free AI found in the console version, it actually comes as something of a pleasant surprise to find myself winning in such a handsome manner. Saying that, the lack of challenge presented by the AI does make the dynamically deformable terrain all but obsolete. Although it isn’t as prevalent as in the console release, its inclusion is still something of a technical triumph on the PSP and it’s a shame that it more often than not plays absolutely no part in the outcome of a race. 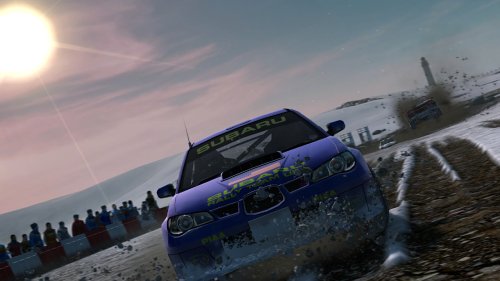 While I may be the kind of gamer who is happy to keep hitting the same tracks, eager to shave a few seconds of my personal best, the majority of gamers will expect a little more depth – and this is where Sega Rally kinda falls down. Despite the fact that there is a career mode to get through, due to a combination of overly forgiving AI and a relatively low number of events, the majority of players will be able to tear through the whole package in just a few hours.

Although many of Sega Rally’s charms are disputable, one aspect of the game that is of an unquestionably high quality is its visuals. Beyond the simple joy of driving under classic Sega blue skies, Sega Rally proves to be something of a technical powerhouse even 3 years after its original release. With an array of extremely detailed tracks and beautifully rendered vehicles combined with the games blistering sense of speed and silky smooth frame rate, Sega Rally is still one of the more visually stunning PSP games available. Some have argued that this comes at the expense of extremely long loading times (which may well be true of the UMD release) but based upon my own experience with the downloaded PSN release, load times are in no way obtrusive with immediate, load free restarts actually proving something of a treat.

Sega Rally is a game that will split gamers straight down the middle. Some will scoff at the lack of content, others at the arcade handling, but for every person who simply can’t get to grips with Sega Rally on the PSP, there will be another who will love every power sliding second of it. If you didn’t like Sega Rally in the first place, this isn’t the game to change your mind but if you’re looking for a beautiful, perfectly pitched arcade racer to take on your travels – look no further.