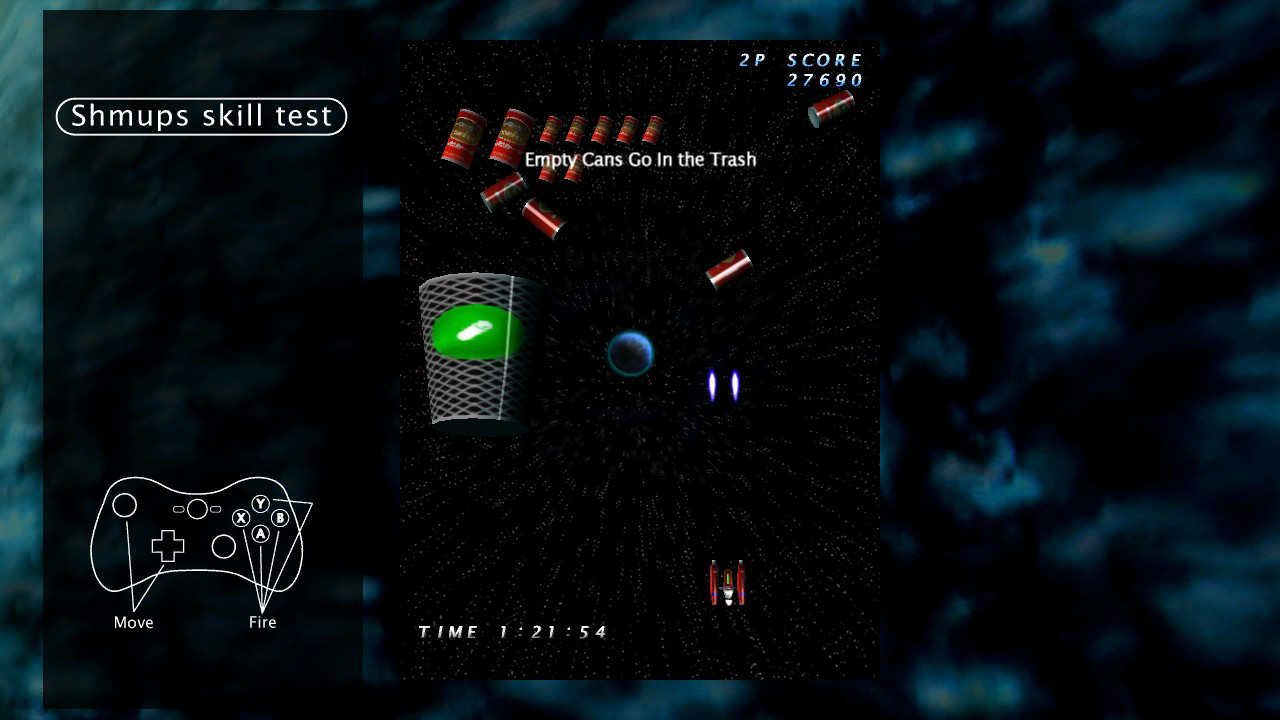 If you’re a big fan of the “shmup” scene, then Steam is the platform for you. There’s literally tonnes of old school shooters on there from Dariusburst: Chronicle Saviours to DeltaZeal, but the only problem is that they’re super tough. I always get to one level that I can’t beat and then that’s me – I’ve effectively wasted my money. There’s a potentially limitless skill ceiling in shmups though, and with a little practice you might find you have what it takes to stand shoulder to shoulder with the best in the world.

Shmups Skill Test is a handy application developed by shooter maestros Triangle Service to help wannabe shooting pros build their skills. The developers have effectively segregated each facet of shmup gameplay so you can focus on one particular area. The result is a mixture of mini games and challenges that test you’re aiming, shooting and dodging skills. At the end, your awarded your score against the online average along with a “gamer age”. Apparently, my “gamer age” is 47. 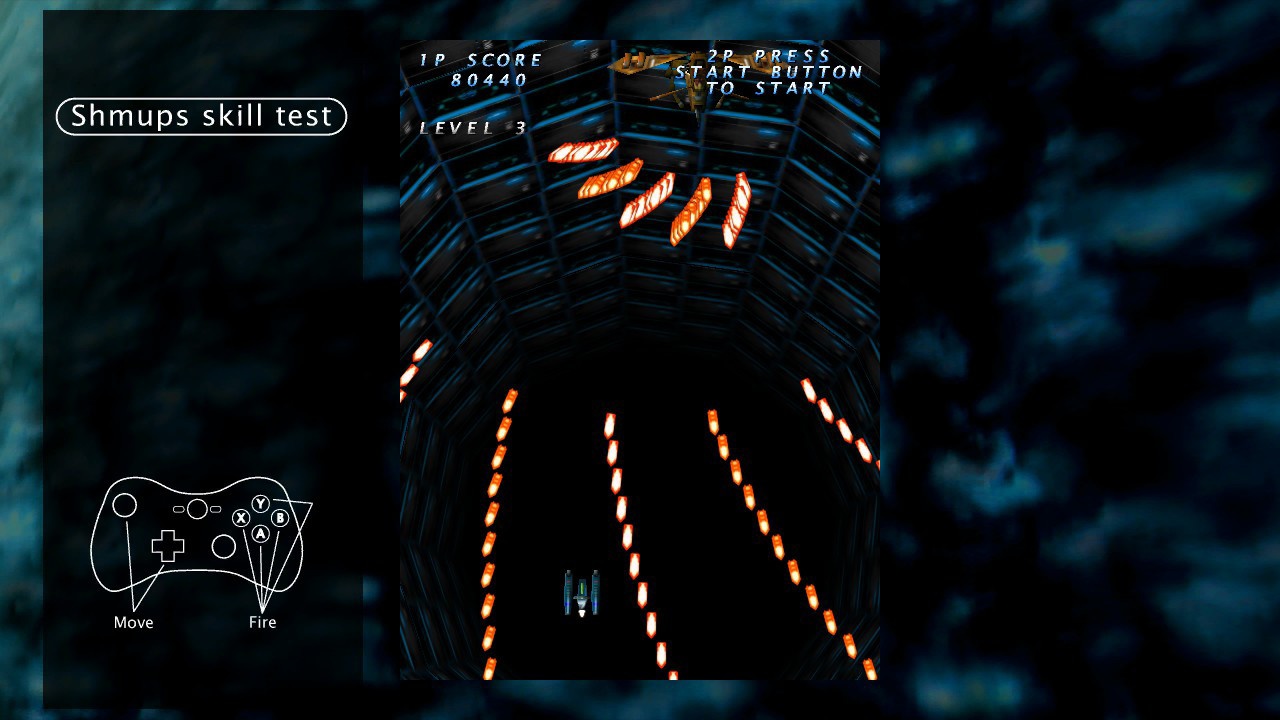 As you play each stage, you’ll unlock them for replay without having to take the entire test again. If you haven’t made the connection yet, this is basically Dr Kawashima’s Brain Training… in outer space shooting form.

To test your blasting skills, the game will pit you against a million tanks and count how many you can destroy before getting hit. It won’t always be the same though, as subtle variations in backgrounds and enemy behaviour keep it from getting stale. The dodging test is probably the hardest because there’s no variation in movement speed; you’re either at a dead stop or full steam ahead. You could imagine then the frustration attempting to make minute adjustments to squeeze through gaps about an inch wide. 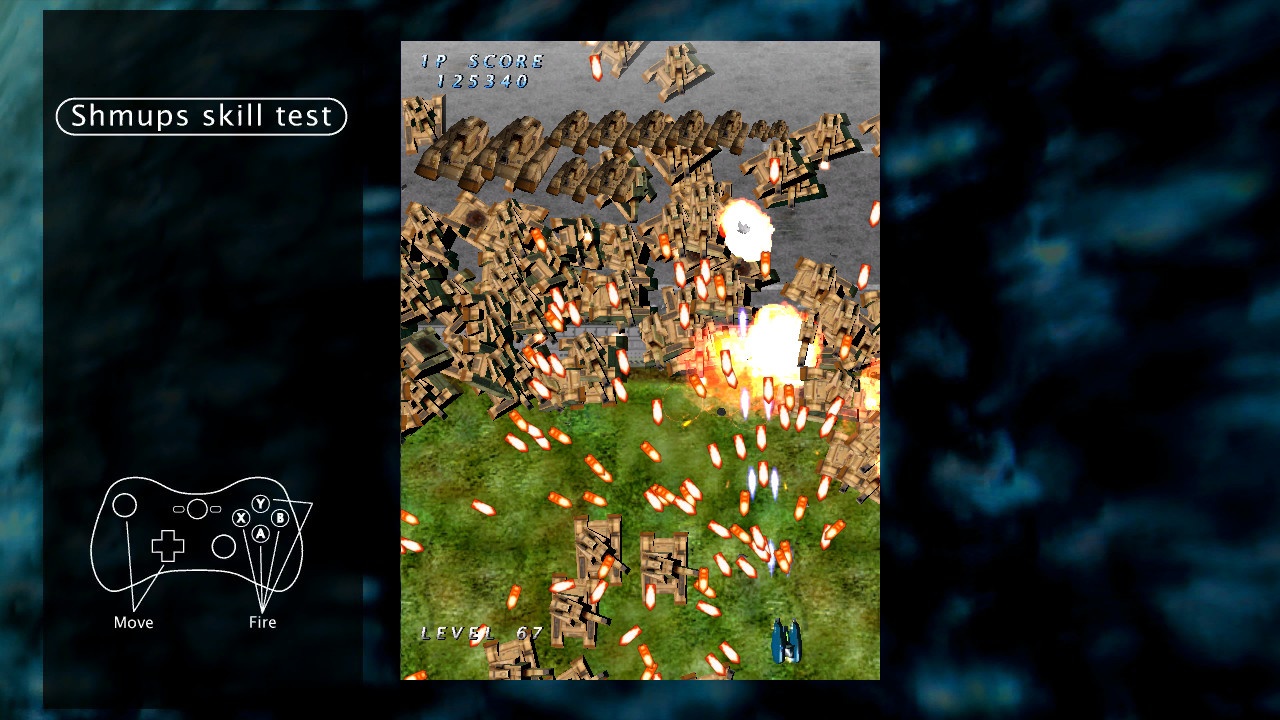 Bizarrely, the one I enjoyed most was an aiming test where you’re in open space right next to a galactic trash can. The idea is to shoot all the floating trash so they’ll fall in. Simple stuff but addictive all the same. Also, there’s a great environmental message in there too. Gee, Triangle Service, next time I’m in space, I’ll be sure to dump my empty yoghurt pots in the nearest planet-sized bin.

Shmups Skill Test is admittedly low on content, and is better described as an application to quantify your thumb-skills rather than a fully fledged shooting game. It looks a little bland on the visuals side when compared to some other Triangle Service games, from the ZEAL series for example, but the soundtrack is catchy enough and the controls are tight and responsive. It’s also low on price, so if you’re looking to stack your trash blasting skills against the world then I guess this is the only place to do it… for now.