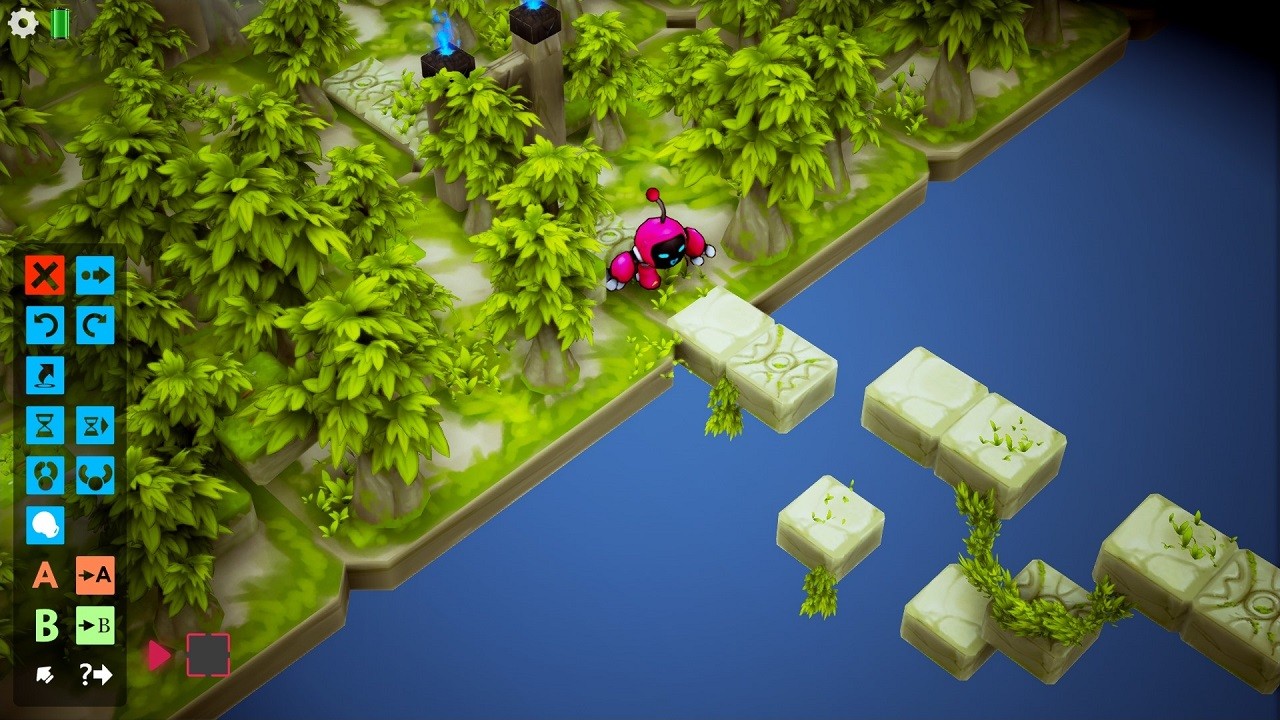 Programming is the new secondary language that we’re all trying to get kids to learn at an early age. Gone are the days where Sesame Street was dropping in random vocabulary in Spanish and French, and now Grover is telling everyone how to handle a stack overflow or something like that. It makes sense: most jobs in the modern workforce interface with computers in multiple capacities, and being able to understand fundamental code is going to benefit anyone and everyone who applies. So we see the marketplace shift and, naturally, the gaming world does as well. While not the first by any means, Jump, Step, Step seems to be, at the very least, one of the most nonthreatening and logical moves into teaching programming. How effective it might be, though, is up for debate.

Bob is an alien robot dude who has crash landed on some foreign planet and, by terrible happenstance, lost a majority of its limbs. Guided by a mysterious voice that you find out is your spaceship, Bob has to take control of the situation and pull himself together (quite literally) while also finding out what happened to cause you to crash. Through a series of explorations and running about, Bob is able to retrieve his missing limbs, as well as different components of the spaceship, and also discover the true source of his crash landing. It’s not a wildly crazy plot, but it’s something that’s a lot more compelling than most of these coding games. Go ahead and ask my daughter why the caterpillar is trying to eat all the berries. She probably has some idea, but I doubt it’s canon. 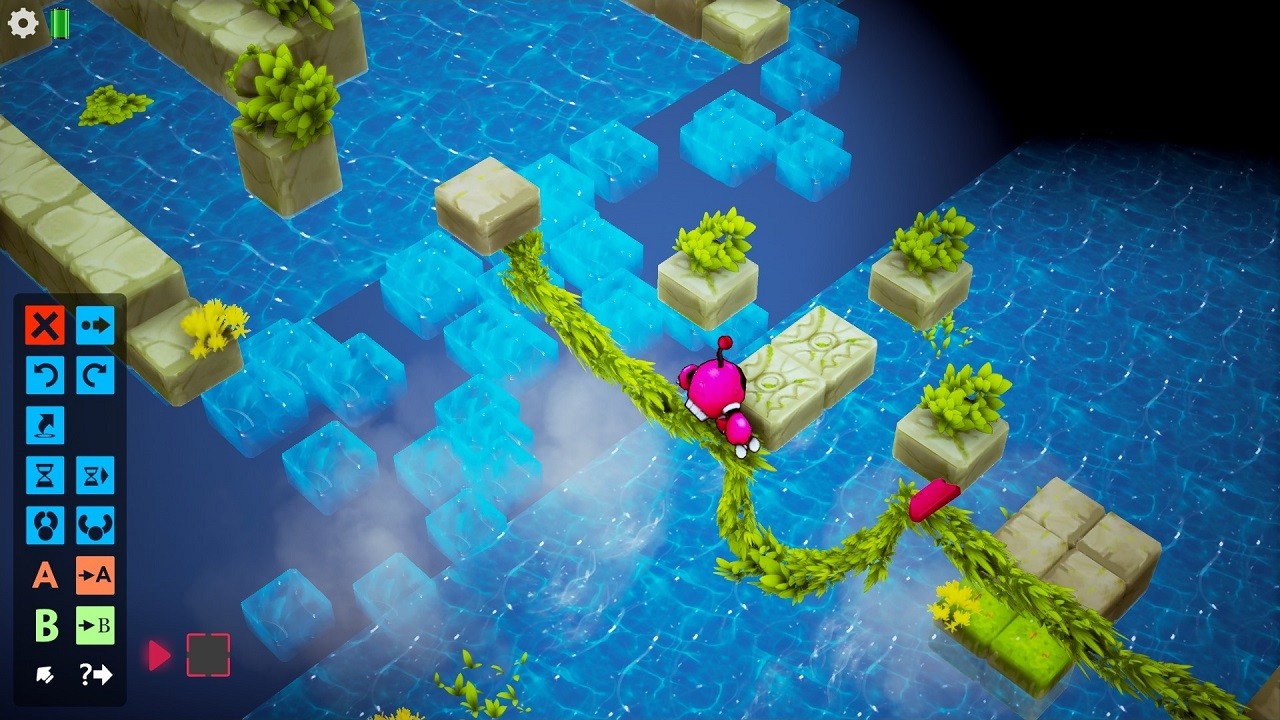 With Jump, Step, Step, the name of the game is trying to introduce logic and sequence to the player without really invading their minds with the ideas of code and structure. Bob can only move through a series of commands that are issued one factor at a time. Initially, Bob moves in a forward direction and is able to pivot. Over time, as he gets backs his arms, legs and more, Bob begins to learn more important commands to help shape his movements. Players are able to add jump commands (important for clearing gaps and spikes), wait commands (for when delayed traps could spell your doom), and loops to prevent you from typing out redundant code over and over again. Keep in mind, the developer didn’t want players to get discouraged or feel embarrassed by closing a different approach than the ideal one, so a lot of the game allows you to work out the code as you see fit. Sure, setting up point markers and using GOTO commands makes for shorter, cleaner code that also saves you quite a bit of time, but it’s not necessary. Hell, if you just wanna waddle everywhere and make a full screen of code, go for it: Bob isn’t in a hurry.

From a game perspective, Jump, Step, Step is a decent little platformer that does its job in a unique way. There’s some cute dialogue that occurs as Bob and the spaceship communicate back and forth over the course of the journey and unlocking new abilities/retrieving lost items. There’s not a discouraging word to be heard, and there’s no sinister undertones or negative connotation for what’s happening. Bob simply has to move forward in a cubic landscape that reminds me of a cross between Bastion and Monument Valley, though there is an inherently dark quality to a bit of it. In an effort to prevent players from putting the cart before the horse, there’s a constant dark shroud at the periphery of the screen, making you need to scroll with one of the joysticks in order to calibrate the camera and see where you’re going next. Also, as a result of keeping the gameplay active and engaging, there’s a lot of narrow pathways to make sure you’re fully aware of turning and jumping in appropriate response, which results in plenty of unfortunate deaths if you get the code wrong. No penalties for dying, so just shake it off, but it can still be annoying.

From a programming perspective, I enjoyed Jump, Step, Step more than most. There’s this understanding that you may have tried some of the programming applications before, so you’re dropped into the scenario with very minimal explanation for the initial commands. This might be a tad confusing for very green players, but it gets worked out in record time. There’s also this wonderful bit of logic that comes from the evolution in Bob. See, for some programming activities, you just get more commands and abilities added over time in an effort to not overwhelm you from the get-go, but there isn’t always the best correlation as to why you can do these things now. That caterpillar I mentioned earlier also gets the chance to jump after a few screens, yet the creators failed to establish why that was possible now and not before (note: my daughter didn’t give a damn because she was 4 at the time and just wanted to eat the berries, so this is my cross to bear, not hers). But by having Bob literally pick up and attach his legs and say “Ah, now you can finally jump!” or find an additional module and say “Great, now you have enough memory to make signposts!” connects more logically with game think. This makes it more accessible to older children as well, which is a wider and better audience overall. If you specifically want your game playing family member to learn a bit about code, this is a great place to start. 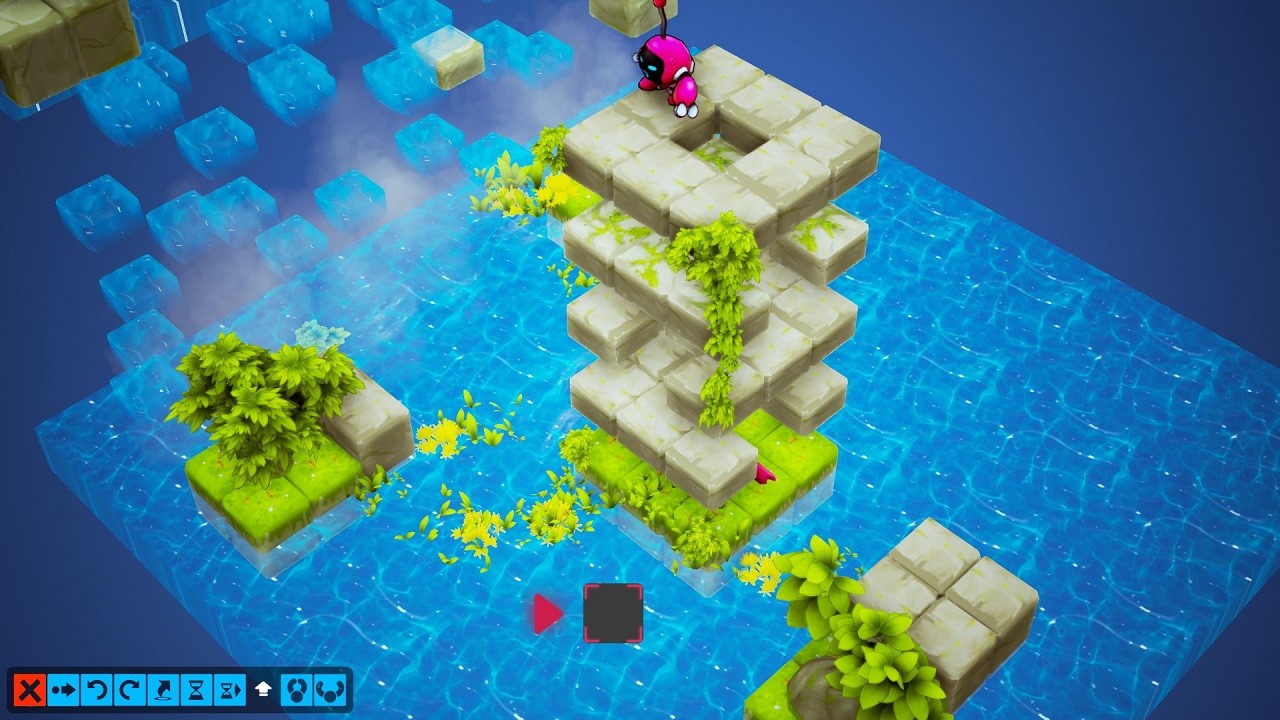 Having said that, there are some fallacies to Step, Jump, Jump. The biggest is that there isn’t much of an incentive beyond finishing the mission. While this sounds silly as a modern complaint (given that all games ultimately just want you to finish the game), it’s a real obstacle with modern titles. Replay doesn’t exist, as once you learn the programming concepts, you’ve gained all you can from the game. The developers understood this on other systems and attached actions to the achievement system, which, three years on, still doesn’t exist on the Switch. So any explorative or experimental gameplay doesn’t really have a place here. You can finish a movement sequence in three commands or eight hundred, it simply doesn’t matter, which is counterintuitive for learning programming. You don’t want a student to write 20000 lines to draw a circle: that’s a failure in anyone’s eyes, but Bob isn’t going to crap on you. As a result, take it with a grain of salt if you choose to use this game to teach the concept of programming.

Yet with it’s cute graphics, simple plot line and ambient soundtrack, Jump, Step, Step is one of the better programming titles that I’ve seen on the market. It’s endearing, it’s logical, and it’s not a bad price given the amount of content you get. If your kid is home and refusing to do the work the school is assigning, let them play Switch with the stipulation they take just ten minutes to work on some programming here. It’s not the worst use of time, and who knows? They might discover a brand new passion.

With it’s cute graphics, simple plot line and ambient soundtrack, Jump, Step, Step is one of the better programming titles that I’ve seen on the market.