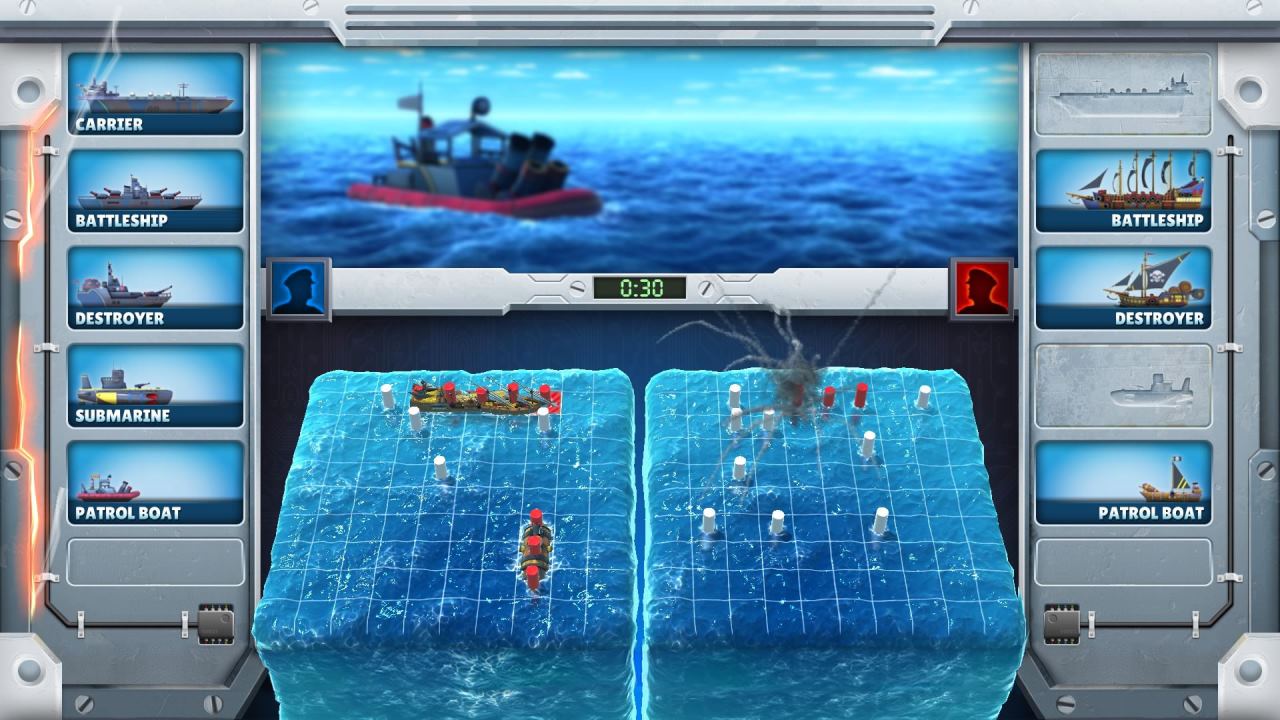 Shortly before the First World War Russian officials were said to have whiled away cold winter nights by sipping vodka and playing a tactical sea-faring game called Salvo. In its crudest form, Salvo was played using sheets of paper containing a grid, and a writing tool. The object of the game was to destroy your opponent’s various watercrafts using strategic guesswork. In 1931 the American company Starex Novelty Company produced a commercial paper and pencil version of the game. And in 1967 Salvo was refined once again after the game company Milton Bradley invented reusable plastic boards and small plastic ships. The first computerised version of Battleship was designed in 1979, and was one of the first games scripted for a computer.

Fast forward to 2016 and Canadian developers Frima Studio (those of Splash Pop fame) have unveiled their update of one of the worlds most popular games. Battleship on the Xbox One is a next-gen reboot of a game that will be instantly familiar to anyone who has played the plastic board version. As with earlier versions,  a typical game of Battleship is played by placing ‘ships’ on a designated grid and then each player proceeds to find and destroy their opponent’s watercraft by ‘shooting’ it, which is done by selecting random grid coordinates. 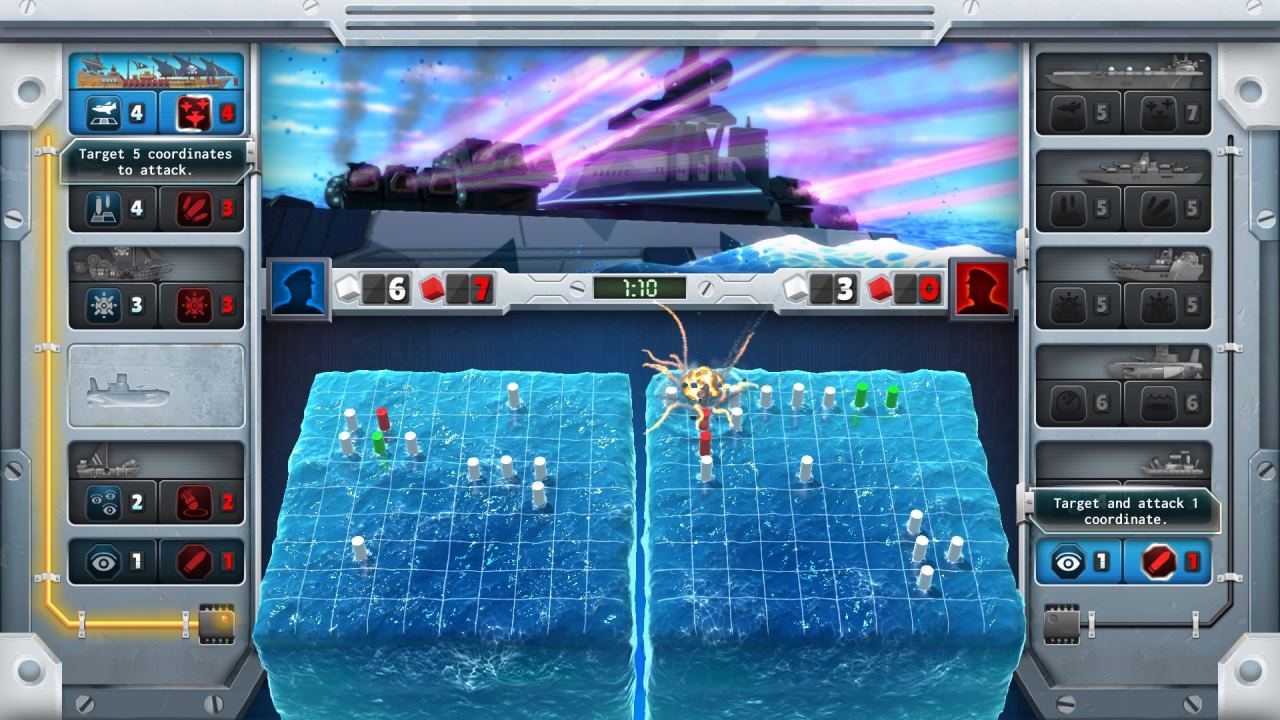 However, as with most reboots, this version of Battleship has been given a shiny new coat and boasts slick animations, special abilities,  a solo campaign as well as a multi-player option. Frima have also added a few bells and whistles not previously seen in early incarnations of the games. The most noticeable of which is the inclusion of two special abilities for each of your craft. Essentially these resource-fueled abilities allow you detect enemy craft and fire at multiple grids using a variety of weapons and air craft.

As these special abilities are unfamiliar extra’s Battleships on the Xbox One also provides an extensive tutorial campaign that introduces you to all of the new updates. You can choose to ignore the tutorial but you’d do so at your own peril. We played through it and, after an hour or so, we realized that the special abilities effectively transform the game into a much more complex and demanding challenge.  During a game  of Battleships you are tasked with controlling five distinct ships in your fleet. These are the Patrol Boat, Submarine, Destroyer, Battleship, and Carrier. You place your ships as strategically as you can and then go about the task of hunting down and sinking your opponents crafts. With some 30 missions to play through, Battleships’ solo campaign can take anywhere between 6 to 9 hours to master.  Excellent value for the asking price. 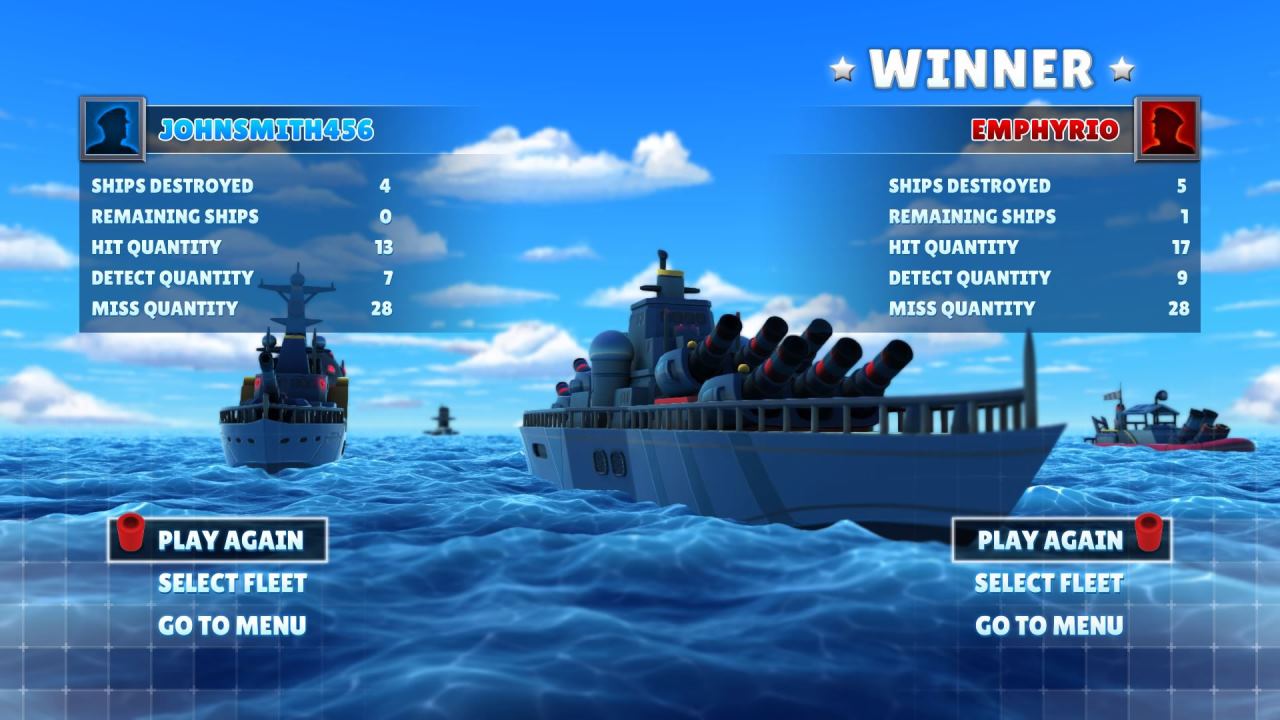 Graphically, Battleships looks fantastic. The game consists of two screens (one for you and the other for your opponent), Each screen has a top half showing your individual sea crafts and a lower half that shows your whole grid. When you fire at your opponents grid, the top half of your screen shows an animation of your sea craft shooting into the water. Why have Frima included this? Simply because they can. And it looks great. In the audio department players are treated to sounds of cannons firing into water and the sound of your missile hitting the water. Or, if you’ve hit a target, you’ll be rewarded with a satisfying explosion and the accompanying sound of metal buckling under the sudden impact.

As we mentioned earlier Battleships has both a solo campaign and multi-player option. Although the multi-player option works well, we found we were too busy with the AI controlled missions and their various challenges. How often can you say that about a game that has both single and multi-player modes? For anyone familiar with the original Battleships, the Xbox One offering will come as a welcome breath of fresh air that reinvigorates a classic franchise. For newcomers, this is a fantastic introduction to a game that boasts a complexity and depth often missing from most triple-A titles. Well worth adding to your game collection.