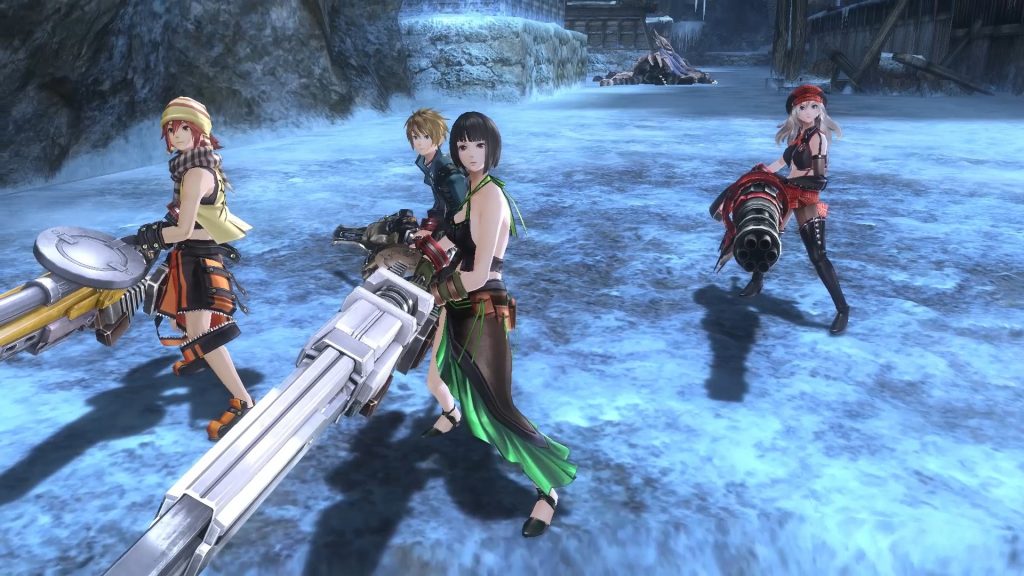 I have always loved the idea of Monster Hunter more than I’ve loved the actual game. I’ve tried to get into any number of Capcom’s venerable monster slaying experiences, but honestly, despite owning versions on everything from the PS2 to the Wii U, I’ve never been able to truly latch on, to become engrossed as so many others have since the series inception way back in 2004. I can see why they are great and why people enjoy them as much as they do, but the grind, well, that’s it, it has always felt like a bit of a grind to me. I enjoy the moment-to-moment gameplay of battling monsters, but everything else, it can all feel a little too much like hard work – simply put, I’m far too impatient. If that sounds familiar, and I feel that it will for many gamers out there, Shift’s, God Eater Resurrection might well be the game that you’re looking for.

Much like the criminally overlooked, Toukiden series (in the West at least), and the solid but flawed, Freedom Wars, God Eater, while perhaps lacking the triple-A polish afforded to the latest Monster Hunter, delivers a more streamlined and casual-friendly hunting experience for those without the patience for some of Monster Hunter’s more obtuse systems. Yes, there’s still plenty to do here, and yes, this has all the hallmarks of a massive time sink, but whether it be the combat itself or the preparations required ahead of battle, God Eater is a much more streamlined, and in may ways, more forgiving experience.

Originally released on the PSP back in 2010, this multi platform remake/re-release has aged surprisingly well, making an especially solid jump to the more advanced Vita hardware. The backgrounds look a tad samey and could arguably do with a bit more in the way of variety, but for the most part, the game runs smoothly and, thanks in part to its solid art design, still looks the part in 2016. Sadly, the same can’t be said when played on PS4. Of course, it’s the same game as it is on Vita, but when stretched out on a 42” TV screen, the rough edges do start to stand out. It’s totally playable on PS4, and if you can get over the rough edges, the art design does make for a half decent looking experience, but realistically, this remains a game that looks notably better on the Vita and, well, one that just feels right when played on a handheld. 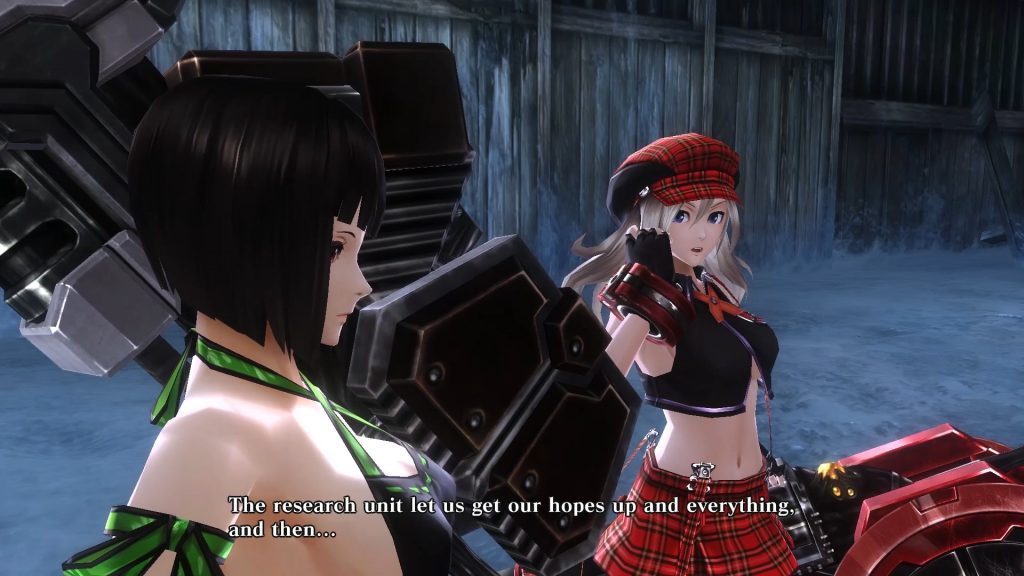 While doing away with some of the more time-consuming and obtuse aspects that one might associate with Monster Hunter, this remains a rather unabashed clone of Capcom’s all conquering monster slaying series. You gear up before battle, you craft items, check that you have the right equipment for the task at hand and then you head out, either on your own, or as part of a team to take down the demonic beasties roaming the now decimated cities of earth.

Beyond the fact that this is set in the future (2071 to be exact), the major difference between God Eater and its obvious inspiration is in its weaponry. Despite ultimately acting in a very similar manner in practice, the God Arcs (weaponry made up of the monstrous Aragami that are laying waste to the planet), these weapons essentially act as a monster murdering Swiss army knife. With numerous different templates (and a further 4 added for Resurrection), each weapon has the ability to work as a blade, a gun, a shield and a monster devouring beast, thus leading to a set of core mechanics that provide a surprising amount of variety.

Again, while those mechanics will still feel rather familiar to anyone who has played Monster Hunter, the link between ammunition and melee attacks ensures a solid mix of close up and long-range combat while the ability to devour your enemies in a variety of different ways, does make for a rather interesting take on collecting and crafting.

You see, with your God Arcs only upgradable via items taken from fallen Aragami, rather than the usual collection methods, here, your God Arc will devour the enemy (literally), and in the process, collect any useful items for the crafting and upgrading of both your primary weapon and potential ammunition (something that becomes much more important as you progress deeper into the game). The difficulty spikes aren’t too numerous, but if you’re hunting on your own rather than online, some of the larger beasts will require some careful pre-mission crafting and preparation if you are to come out on top. Don’t get me wrong, the AI is, well, it’s acceptable, but during some of God Eater’s more challenging encounters, there is no escaping the fact that life is made considerably easier by a handful of well-prepared online companions. 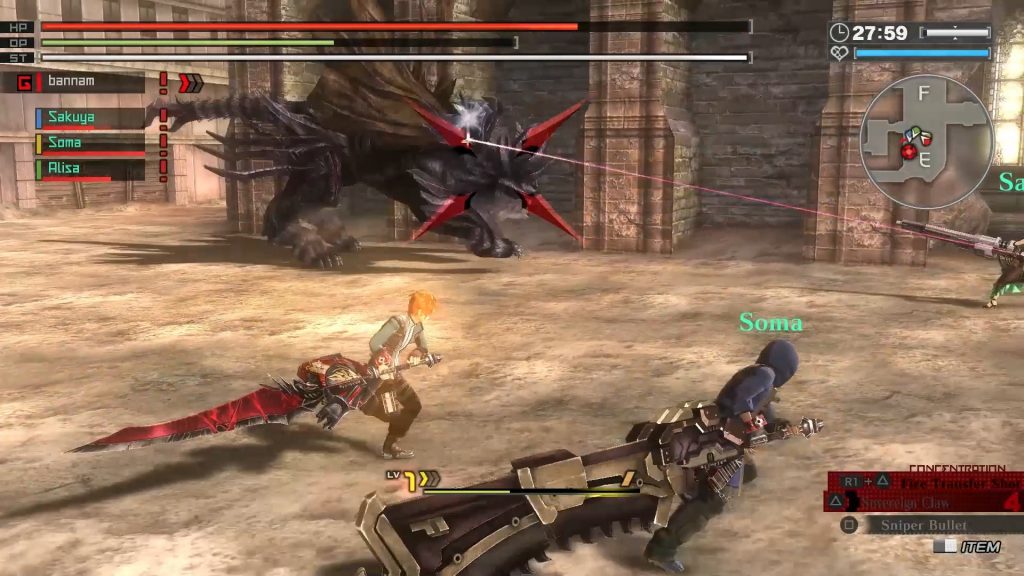 Thanks to this being essentially the second upgrade to the original God Eater (after God Eater Burst), what was initially a content-rich experience has subsequently become something of a monster in its own right. For those ensnared by the combat, the world and that incredibly addictive gameplay loop, God Eater: Resurrection has the potential to steal away untold hours of your free time. Beyond the increasingly epic story arc (up to 14 from the original’s 6), there are a huge number of side missions and a huge amount of replayability thanks to the implementation of cross-platform online play which, based upon my time with the game, works surprisingly well. Yes, at its heart, it is rather repetitive and yes, the story is rather forgettable, but just like back in 2010, there is something incredibly compelling about that gameplay loop, about collecting your spoils before crafting new items and stronger weapons to take on bigger and more challenging Aragami hunts.

There’s nothing here you haven’t already seen in Monster Hunter (and many games released since), but God Eater is nothing if not effective, and thanks to its strong premise, impressive Aragami and fantastic selection of utterly outrageous weaponry, Resurrection represents a genuine alternative for those who find themselves a little overawed by Capcom’s unforgiving equivalent. The rough edges might be a tad too visible when played on PS4, but on the Vita (its more natural home), God Eater feels as fresh today as it did upon its original release. It might not do anything particularly new, but what it does, it tends to do very well, and despite its lack of variety, remains one of the finer examples of the genre