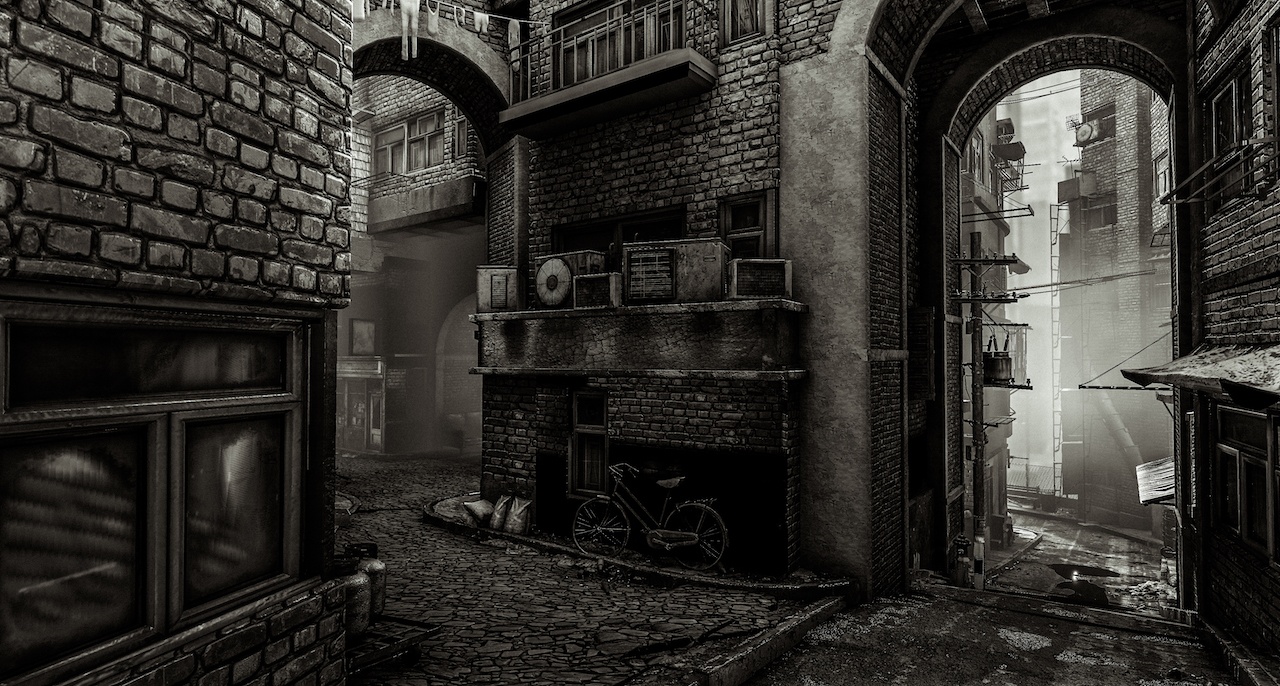 If there’s one genre that lends itself perfectly to VR then it’s horror. Movies have tried and mostly failed to scare us, Games have also tried and in some rare cases truly scared the hell out of us, personally silent Hill 2 still freaks me out even now so having the ability to place yourself in a game world with full 360 degree immersion and chilling 3D audio can only be an a step in the right direction for horror game fans everywhere(or wrong depending on your fear levels) and after playing Here They Lie from developers Tangenteman, for me personally it’s been a mix of both.

The game begins with you face to face with Dana, an attractive young lady who stands out considerably due to her dress being the only colour on-screen, she obviously knows you well as you have a brief sentimental chat before she escorts you on to a train, doors closing you leave her on the platform and it’s here you start your decent into what I can only describe as a physiological journey fuelled by chilling imagery, fear inducing sound but mainly your own imagination.

Visually the game delivers fantastically realised environment’s for you from dingy dirty underground stations to dark and deserted streets and back ally’s with all manner of weird and wonderful things waiting for you to enter their domain, flashes of colour briefly draw your attention away from the games normal bleak black and white presentation which I feel shares common visual ground with Spielberg’s Schindler’s list especially a stunning gondolier ride towards the end of the game highlighting this with dazzling effect, it is simply a breath-taking sequence needing its own brief recognition but for some reason for all of the beauty on display it’s all seems out of focus , either this is a design decision by the developer hoping having limited clarity will heighten the tension or just the way the game is I have no idea, but to date I haven’t found any explanations for this strange choice in presentation. 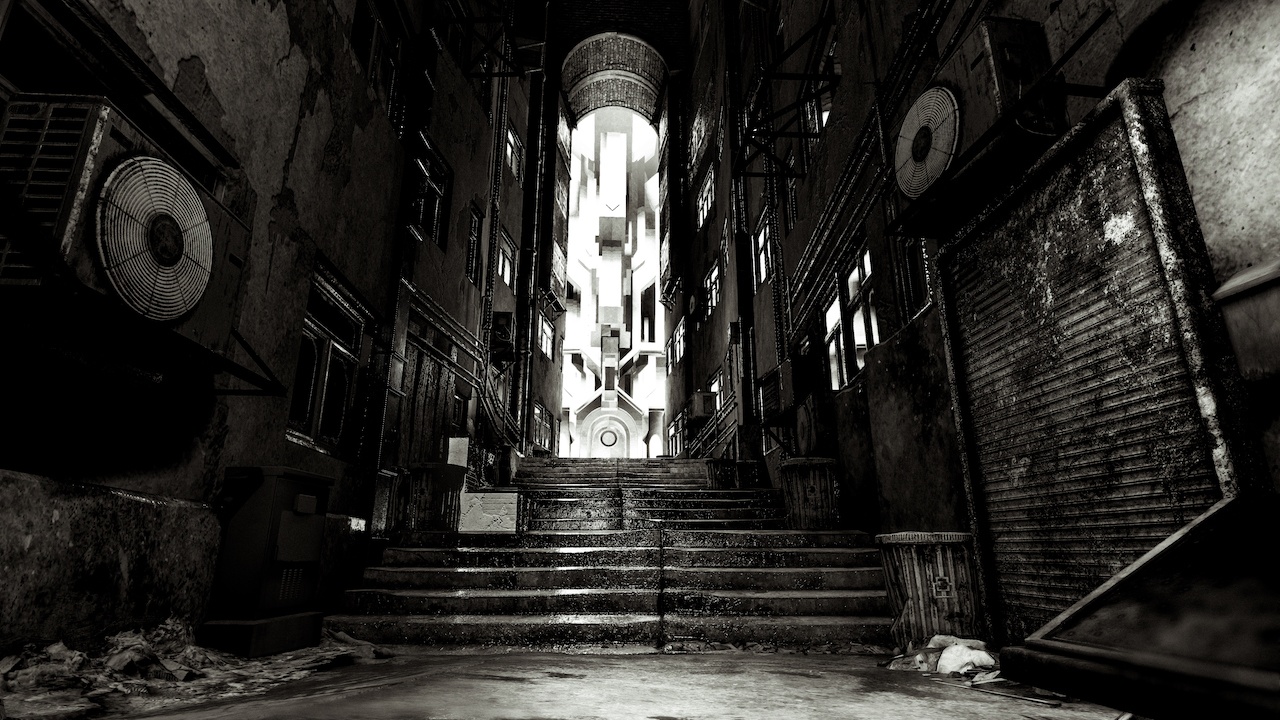 Audio however is a completely different story, every rustle of paper, every rolling tin can, every whistle of the wind sends chills down your spine, feral grunts from dark corners stop you in your tracks and thanks to the VR’s immersion you really do have to consider if you want to look back or just ignore the noises coming from behind you and carry on walking.

And walking is really what this game entails, basic movements utilises the left stick and the right stick controls your turns in 90 degree increments but you can also determine your direction with a subtler approach by turning your head in the preferred direction and walking forward, you have a dual shock 4 controlled torch in later levels helping you navigate the dark areas and believe me your need it, however it’s powered by batteries that you have to regularly find in the games nooks and crannies.

The environments really are the star of the game, they are full of strange imagery and menacing characters that wouldn’t be out-of-place in a David Lynch movie but you can avoided them if you want or need to by implementing the classic stealth option of creeping past when they are not looking, if you see a weird pig character (yes, pig) grunting at you from the dark Street ahead then just turn off in a another direction and it will ignore you, head closer and it will attack but holding down R2 to run is no help as you are soon being battered to a pulp and heading back to the last save point. 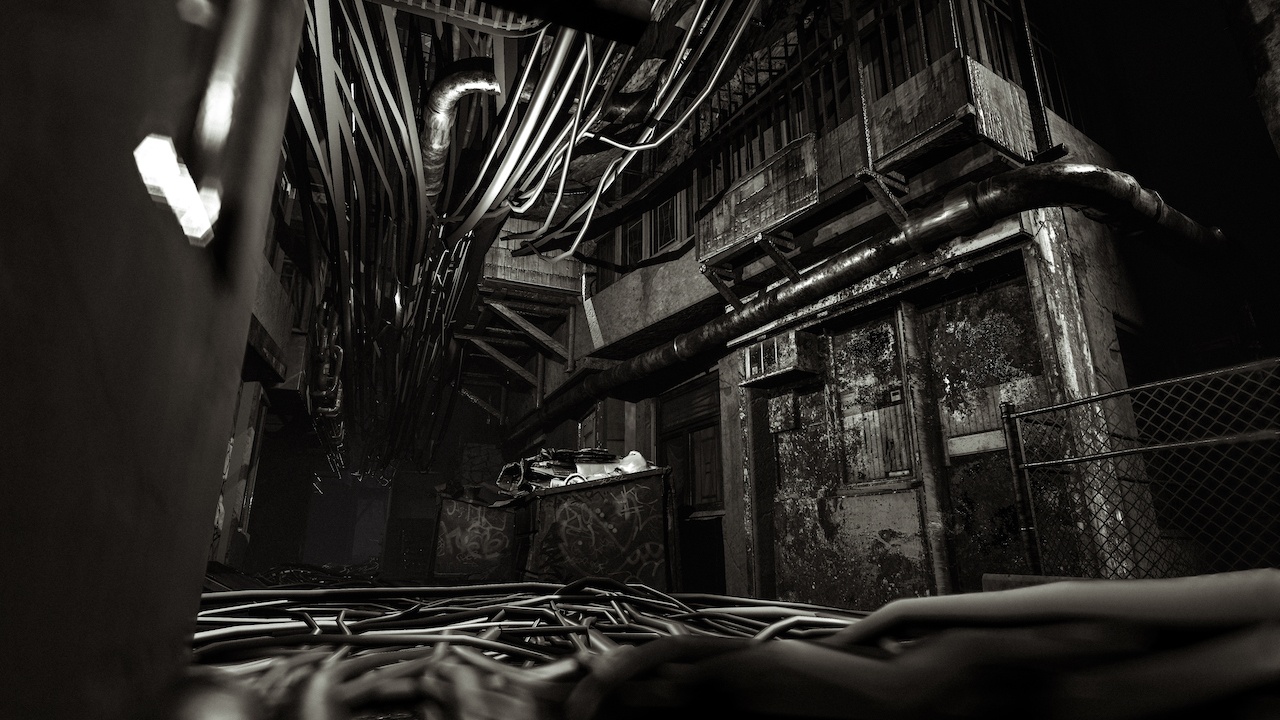 The term “Walking Sim” is a game genre that’s been around for ages but has seen a massive resurgence recently with titles such as Everybody’s Gone to the Rapture, Esther and The Vanishing of Ethan Carter and this game sits with those comfortably, following the tradition of telling a story by collecting audio logs or reading letters to piece the puzzle together, you are given a few NPC interactions at certain instances with some minor choices to decide on but I don’t really think it changes the outcome of the games overall ending, just included to help mix up and progress the story but I am planning a second play through soon to check if there are alternative endings but only after I have given myself a good rest period as this game can cause some motion issues, even those with concrete stomachs like me will need to take advantage of the games recommended rest periods between levels.

Overall Here They Lie demonstrates what the early VR can achieve for horror gaming, it’s a tense and often nightmare inducing vision of a decaying city where all morals of human life have gone, replaced with imagery and depravity that could shock some un-suspecting gamers, brief episodes of motion sickness and Low Res visuals aside I loved this game and I really appreciate and hopefully understand what the developer has tried to create, a simple fear inducing walking sim where its left to your own imagination to determine how scared you become, for me I was  bloody scared.