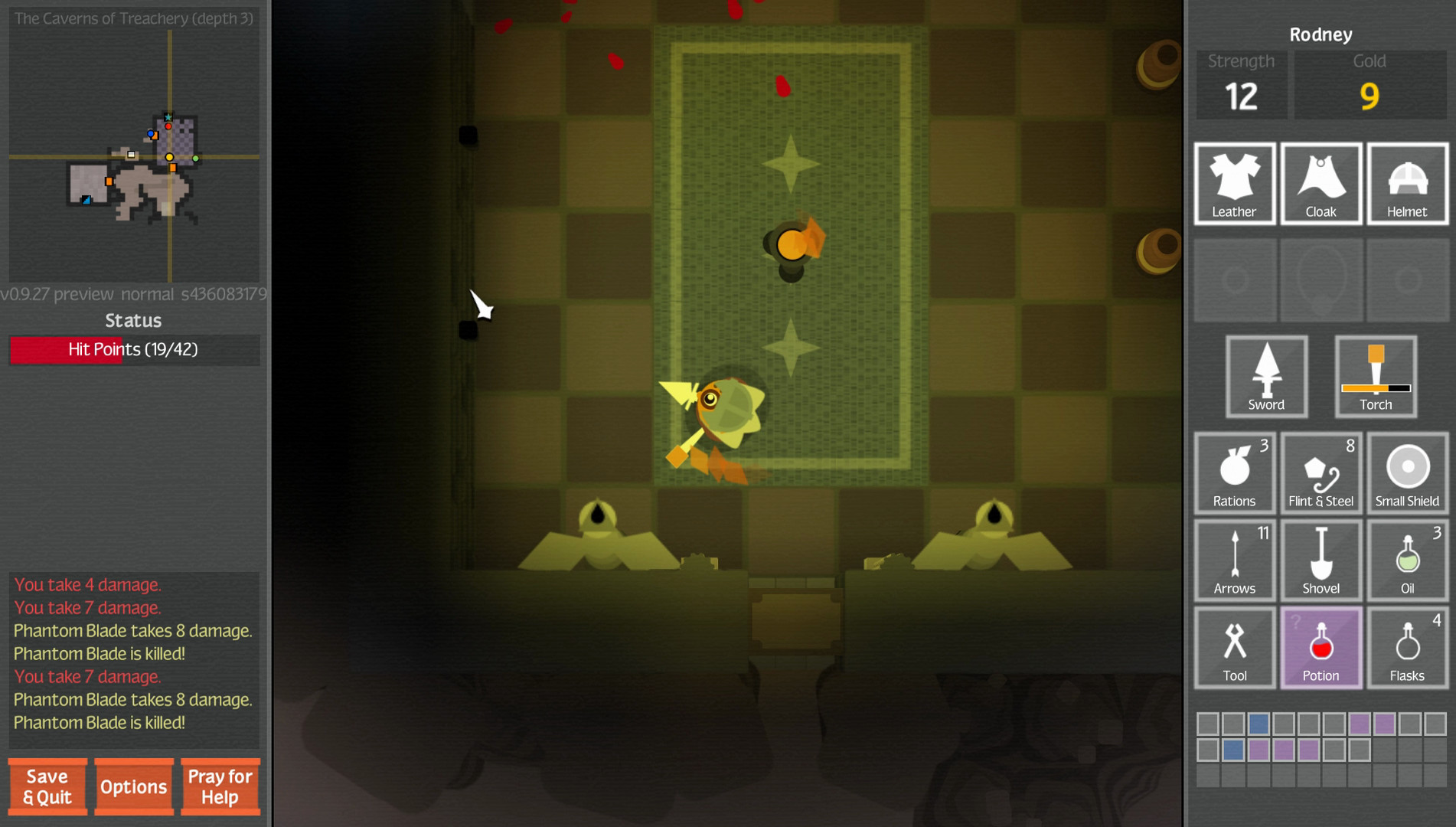 Unexplored is a dungeon crawler made by Ludomotion, which features a top-down view, realtime combat and procedurally generated levels. Considering that over the last few couple of years there’s been a huge amount of so called roguelikes, roguelites and, consequently, dungeon crawlers coming out, the genre has become somewhat saturated in terms of what these games really offer. With that in mind, titles on this genre seek to differentiate themselves from others, usually by providing an interesting twist or a more focused approach on one mechanic, while still keeping most of its others roots intact and, in that sense, Unexplored is no different.

In Unexplored your goal is to delve deep into the Dungeons of Doom, retrieve the Amulet of Yendor and then make your way back to the surface with it. That’s pretty much all the game offers in terms of story, besides some journal entries which you can find throughout the dungeon that provide some nice little tips and other trivia. In any case, each dungeon has a specific seed that you can share with anyone you want to see who gets furthest or who successfully completes it first. Besides that, the game also offers daily and weekly dungeons, in which you can compete for a spot on the top of the leaderboards. You can also customize your runs by making them have extra puzzles or bosses, which will result in more rewards. In the same sense, the game also offers three different difficulty settings, which provide different degrees of challenge and rewards.

Unexplored has many little gimmicks that, when you put them all together, turn it into a very refreshing and enjoyable experience by making it extremely easy to pick up and play but, at the same time, they also make it extremely punishing to any error the player might make. In any case, the game doesn’t seem that intimidating when you look at the screenshots, given the very simplistic visuals but with high colour contrasts. In a way, this is essential so that you can clearly distinguish what is what when there’s plenty of enemies on the screen and, in a way, to distinguish what is harmful from what is not and what belongs in a certain magic category. With that said, the game does allow you to customize the look of your character, in the tavern, before heading into the dungeon, and you can also offer beers in exchange for helpful information regarding the dungeon itself, such as different zones and secrets. Still, the customization aspect, even if it’s decent, is rather lacking and has no real practical use since, most of the time, your armour will cover up your body. Anyway, as you play you’ll also unlock more classes which you can choose at the beginning of a run and these have varied stats, which help a little in adding a bit of variety to the game. 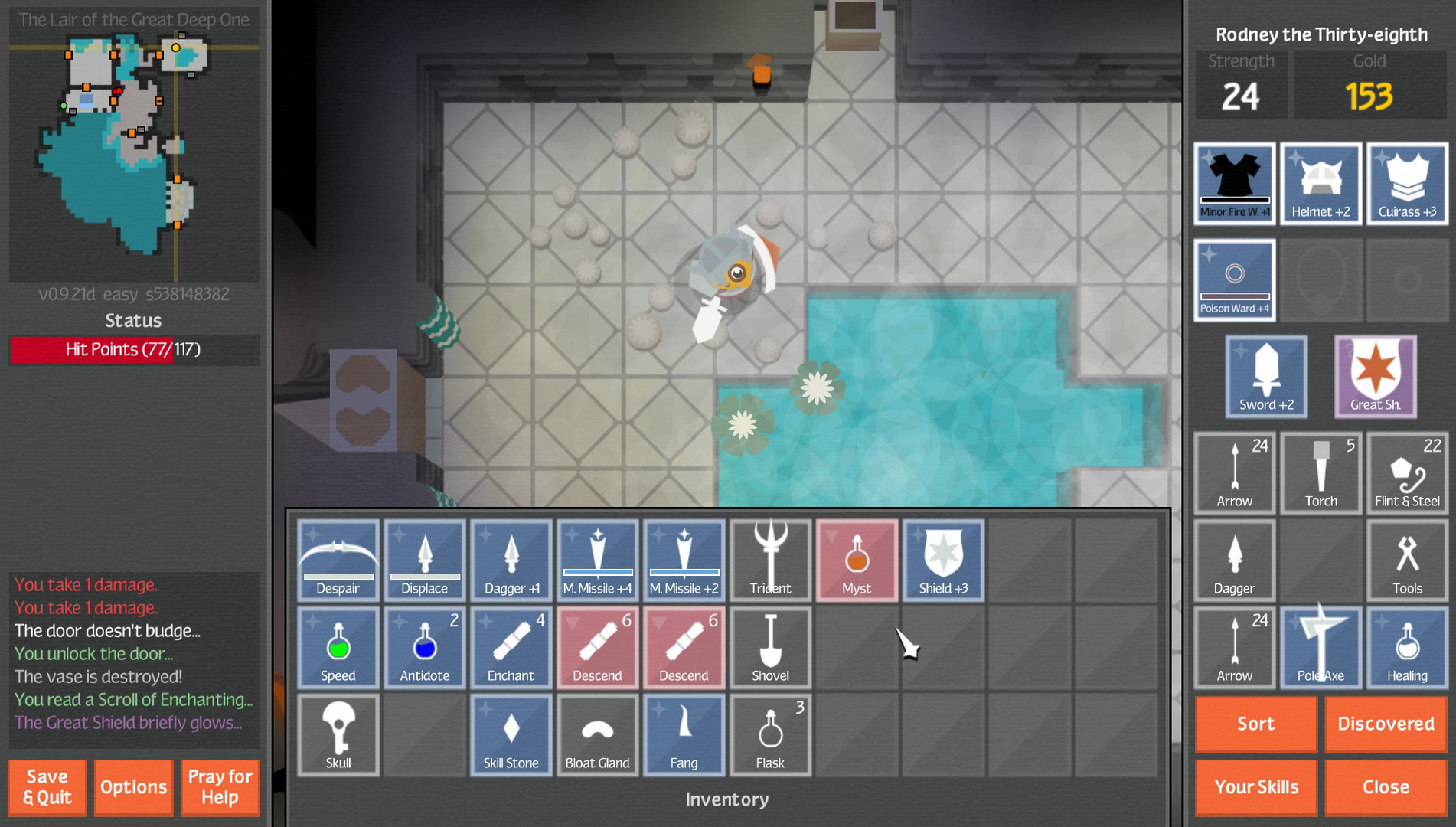 One rather peculiar thing about Unexplored is the fact that the levels themselves are procedurally generated but they are done in a way that I think hasn’t quite been made in other games like this. The developers call it “Cyclic Dungeon Generation”, which is basically making it so that, in each level, the different areas you can access are laid out in a circular shape. This means that there’s usually at least two ways to get to a certain place so the levels feel less random and look a lot more like they were handmade. In the end, this allows the game to block certain paths so that you’re forced to go around and then unlock a shortcut. Also unlike most game’s linear dungeon’s layout, Unexplored’s dungeons are laid out in branches, meaning that from one level you might be able to access more than one different level from the floor under you. This allows for a bit of backtracking, like collecting keys from one place in order to go to another or simply exploring secondary levels that might contain loot.

Personally, it’s the gameplay itself that makes this game worth it. Besides the standard lock picking and trap disarming you’ll find yourself doing, you’ll also often find yourself sneaking next to the dungeon’s walls, since this allows you to remain hidden. Still, this is not always the case since armour plays a huge role and, if you have a piece of heavy armour, you won’t be able to sneak around and, overall, you’ll end up making a lot of noise, thus making enemies aware of your presence. It’s with line of thought that you need to decide what you want, do you want to be a noisy walking piece of armour, or do you want to sneak around with your cloak and strike the enemies from the shadows? Unexplored offers a good amount of variety of different approaches as to how you want to play the game, even if you’re playing it with the same class over and over. The game encourages you to try new things, and that is clearly seen by the blind crafting system and the ability to use unidentified items in order to learn what they do, even if sometimes doing that puts you in harm’s way, it’s all part of the fun. For example, one time I came across a boss and I was lucky enough to remember throwing some unknown potions I had been stacking on my inventory for a while and these turned out to be explosion potions, which allowed me to quickly deal with the enemy. 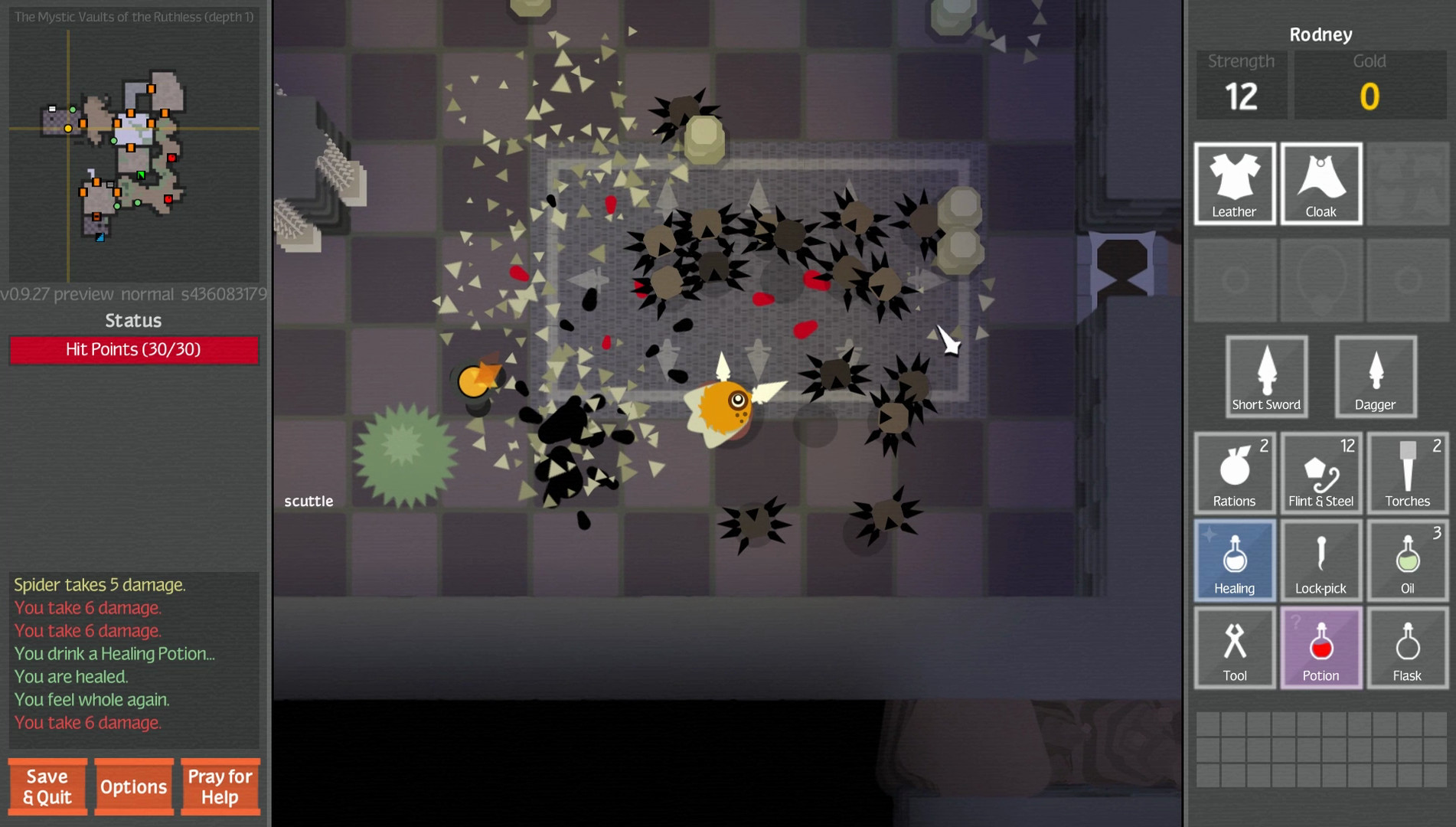 As far as combat goes, I’m inclined to say that it’s probably the best part and, as far as I recall, one of the most enjoyable combat systems I’ve ever seen on a dungeon crawler. You can have two weapons equipped at any given time, one on each hand, and once you use one of them it will go on a cooldown and you’ll have to wait before you can score another hit. There are throwable weapons, such as the dagger, and magical weapons that need to recharge but the most satisfying ones to use are melee weapons, including the shield. With these you only need to touch an enemy in order to hit them, like running against them, but you can also lunge forward in order to deal more damage. The ability to use two weapons at once and being able to quickly change those to others from your inventory by simply pressing the assigned hotkeys can really turn the tide of an encounter and, when there’s tons of enemies on the screen, it is very enjoyable to just slice and dice your way through them by using all sorts of weaponry.

One thing that still boggles me about the interface is the fact that you have both sides of your screen occupied by information that could perhaps be better concealed on other menus, which results in you playing in a somewhat square-shaped portion of the screen. While I do admit that having the map on the top left corner is quite useful, I do think that the right side dedicated to your character isn’t really necessary, since you can assign hotkeys to any item and pause the game at any given time and just open your inventory.

In essence, Unexplored’s cyclic dungeon generation, fast-paced combat, adaptive soundtrack and simple looks make this game quite the treat, even though I’d like to see more enemy and weapon variety. Still, the developers seem pretty dedicated to their fan base and have been updating the game post-launch and listening to any suggestions people might have. When taking all the aforementioned into account, I honestly can’t recommend this game enough. If you’re a fan of the genre you probably have grabbed it already but, if not, you should stop reading this and do yourself a favour and go play it. Simply put, Unexplored is quite possibly one of the best modern adaptations of dungeon crawling and anyone slightly fond of the genre should keep an eye out for it.