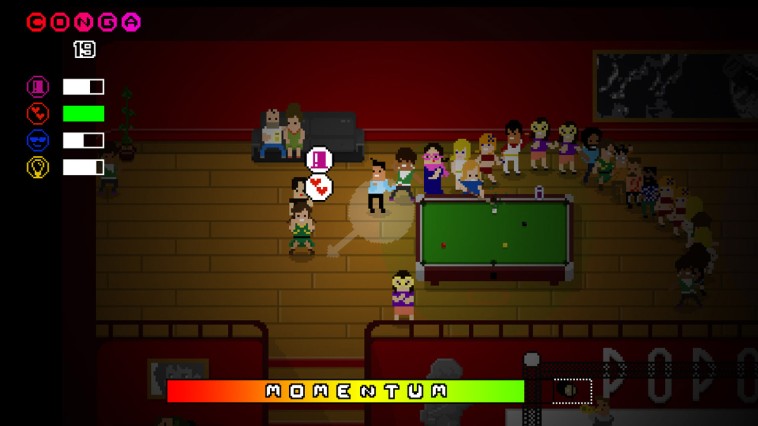 Ah, the conga line. Born out of the soulful music of communist oppression in the 1930s, this dance, created in Cuba, became a mainstay throughout the 50s until someone realized it was just moving in a line with someone touching your hips. Even today, the one person from accounting will have too much to drink at the Christmas Party at the office and try and start a conga line, usually during a song that’s deeply inappropriate for the occasion. You know how to do it, even if you’ve never done it: if you can move in a line and kick every fourth step, you can conga. But are you a true master? That’s what Conga Master Party seeks to find out.

Conga Master Party is an updated version of Conga Master, a brilliant Steam game that revolves around making and maintaining the biggest and best conga line imaginable. Using your awesome dance skills and swarthy appeal, slowly add people to your dancing train until you have captured the entire party’s attention or you lose too much momentum and the line dies. After all, if people aren’t constantly joining in, there’s no thrill to the Conga!

Single player mode is a must for people who find that they enjoy the game, which has the simplest control setup I’ve had to think about for a while. Left and right shoulder buttons control which way the line is moving, and push both of them at the same time to dash. Circle around party goers to get them slowly interested in joining the line, and don’t run into them or they’ll get angry and reset their interest meter. For the solo campaign, you need to pick up a certain number of dancers with special attributes (coolness, attractiveness, intellect and…door?) before you can move onto the next party. Seems fairly straightforward, but, as always, there’s a momentum mechanic, and that seems to go faster and faster the more people in your line. It’s a neverending quest if you’re not careful, and you’ll quickly end up stranded on the dance floor with no one willing to join and add their energy. 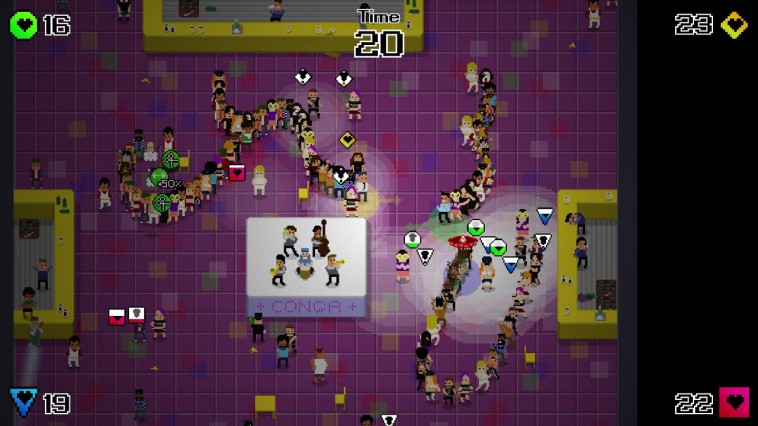 I absolutely love the absurdity of Conga Master Party. Besides the initial concept, there’s the execution that makes everything so fun. Not only are you trying desperately to reinvigorate the arguably laziest dance in the history of mankind, there’s everything about the process that makes it even more fun. Once your line gets long enough, you can bust into other areas to pick up more dancers. Ever had a conga line come through the bathroom and you NEEDED to join? I absolutely have. There are powerups that make your line faster, keep momentum, or increase attractiveness, and nothing says “join my silly dance squad” like a massive sombrero. There are pigs all over the place, for reasons I cannot imagine, and they want to dance as well, but add nothing to the line other than, well, being a pig. And are you also worried about the line getting too long between stages? No worries! A convenient UFO will come and abduct a majority of your party in a minigame that requires you to outrun the tractor beam. I didn’t make any of that up, and I absolutely loved it.

The controls of Conga Master Party do have a bit of a steep learning curve. The left and right turn don’t seem like a lot, but there are elements of each dancer you need to understand (and there are many, many dancers to unlock). Some have wider circle radiuses, some tend to conga a bit tighter and slower. Who’ll be your favorite? And, yea, people forgive you for running into them, but resetting their interest meter could mean the difference between picking them up in the nick of time and getting a game over. Not to mention various hazards – bullies who shove conga lines, janitors who have the worst timing in mopping – add more complexity and challenge to what could otherwise be a straightforward time. A roller disco level made me retry multiple times because the roller pig in the center of the dance floor kept crashing into me and ruining my groove.

If you beat single player too quickly (or simply want some fun with a friend), Conga Master Party really excels with the number of multiplayer styles. Every type is for two to four players, and I HIGHLY recommend having four players for sheer insanity and madness. There are games like Mortal Conga, where you collect as many pigs as you can in a short time, then try to attack your friends’ lines in order to become the last one standing. 1-2 Conga, a special new mode added just for the Switch, plays like a game I had in elementary school, where lines get longer, then challenge each other to Ro Sham Bo when they run into each other, and the victor gets half the line of the loser. You could, of course, just avoid your friends and play fairly, but what’s the challenge in that? Conga Master Party really wants to emphasize the party aspect, because that’s where the game shines. Dancing alone is never as fun as dancing in a group. 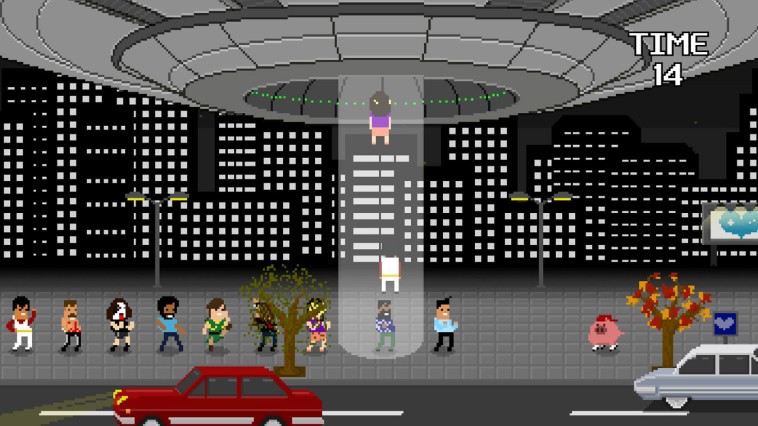 Graphically, if you love well done pixel art (which seems to be a fad that hopefully is losing steam), you’re gonna love this game. Everything about Conga Master Party feels like an idea that could have been born out of the 8 bit era, but, instead, was given the care and technicality of modern technology and design. Things like the level design of an all night burger joint, or what appears to be someone’s high school prom, just pop when done in a blocky but sharp style, and being able to notice the tiny details of each dancer makes the art even better. This isn’t some Atari mess where it all blends together, and this isn’t even Superbrothers with extremely rough facets to everything. This is quality done in a high yet low fidelity, not coming close to the microfacets of Owlboy but still having a ton of love and care. I totally was digging it. OH. And the Switch icon? Looks like a pig who looks like Mr. Saturn. Undercoders, you seriously know your audience.

Conga Master Party is a sight to behold on the Nintendo Switch. It’s simple in concept, tight in execution, gorgeous in presentation and relentless on replayability. I actually would prefer to get friends involved in a conga game rather than some of my other titles, including 1-2 Switch, simply because this is more self-explanatory but has tons of variations within. There isn’t a low point to this game, other than the thought that you may hate dancing, and, if so, this game isn’t for you. But if you love fun games, if you love something that you can take anywhere and play against anyone, if you love TO CONGA, then this is absolutely for you. Bablu!