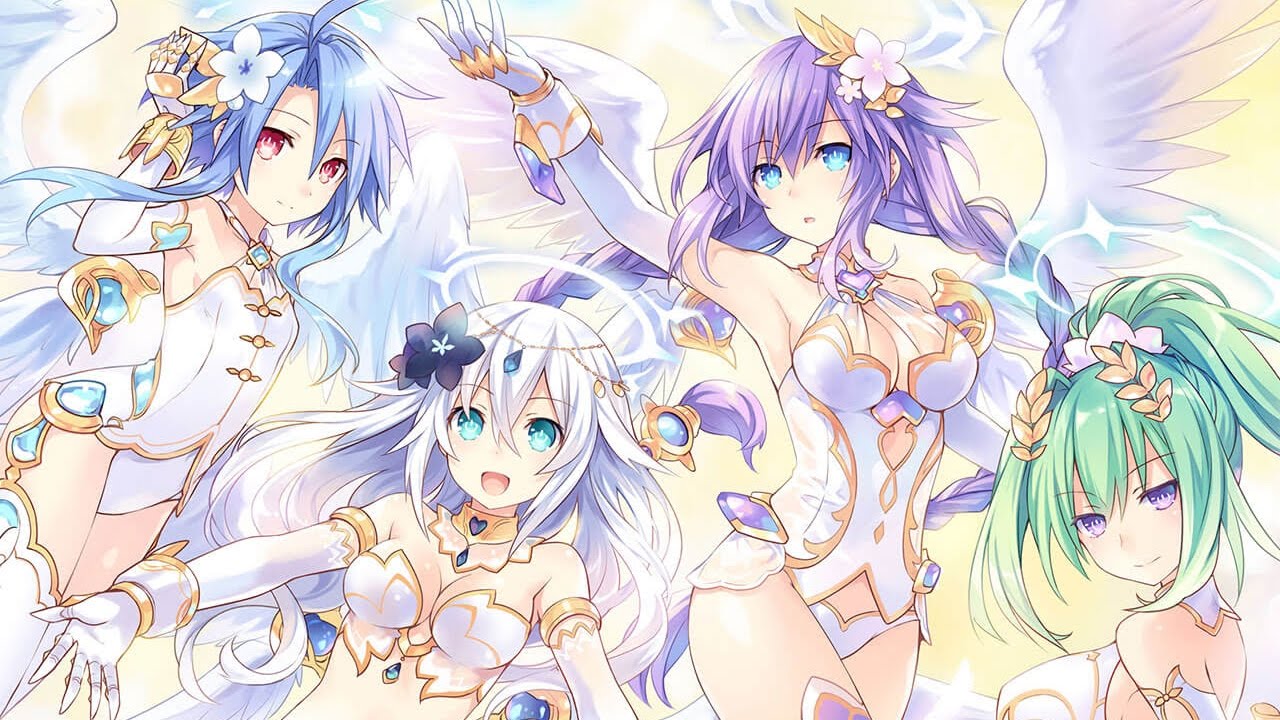 For those of you not familiar with the Neptunia universe, the games take place in the Gamindustri universe and revolves around four CPUs– Noire, Neptune, Blanc, and Vert–that serve as the goddesses of their nations. Each goddess-nation combo serves as a stakeholder in the console war, making this universe and it’s foibles a pretty familiar one for console gamers. There are also cameo appearances from game development teams-made-cute-anime-girls and a whole heap of pop culture references, fourth wall breaking, and fan service. It’s fantastic.

That brief history aside, Cyberdimension takes place in the fantasy online game world, Alsgard, in 4 Goddesses Online, where our favourite CPUs, CPU candidates, and a host of new characters serve as beta testers for the game. If the name sounds familiar to long time fans, that would be because Vert actually mentions it as her favourite MMO several times throughout the course of the canon story line. That little nudge made me fangirl. Cyberdimension follows the same “trapped in a game world” formula of .Hack or Sword Art Online where you’re part of a faux MMO in the shoes of your chosen character. In this case, the goddesses play as themselves, though each fills an RPG class like mage or paladin.

Reviewing this game was incredibly easy–especially given that I reviewed Ys VIII a month or so ago–because the battle and exploration systems are very similar: you command a single character in a team of four, the other three being controlled by the AI based on the settings you assign it. You can swap between leaders outside of combat as you see fit, though I preferred to play as the Dark Knight, Noire.

You have the ability to auto-attack, dash, and use skills which are hot-keyed to L1 + a face button. The game is divided into the world map, towns, and dungeons. If you’ve ever played the Hyperdimension series before, the layout will look very familiar to you. You’ll unlock nodes on the world map as you progress and inside towns you can select from different buildings and NPCs, which are represented by cute little 1D chibi’s. 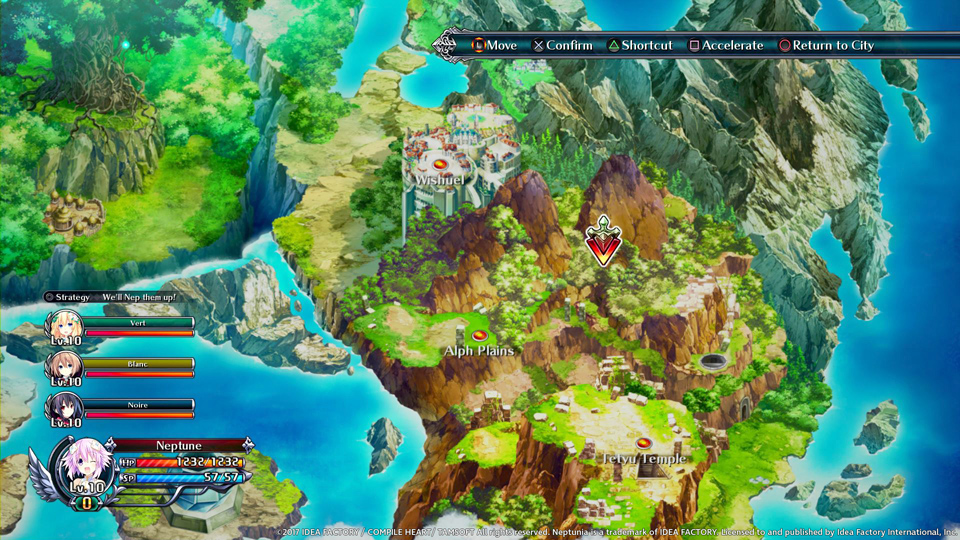 Dungeons are your standard RPG fare; linear paths from start to end that require you to defeat a boss before you can leave. The monsters will be familiar to those who have played one of these games before. They have a health bar and a shield bar, the latter of which must be broken to inflict a breaking status so that you can do significant damage. Every strike empties the shield bar, but skills are most effective. Skills cost SP which can be regenerated by using Basic Attacks. You can change the way your AI controlled party members fight using pre-set options. These include a variety of behaviors, ranging from more aggressive skill use to focusing on defense. While you can’t create your own template, the ones provided should be more than enough to have the girls accentuate your playstyle.

When exploring a dungeon, the world becomes 3-dimensional. Enemy encounters can be seen on the terrain and you go seamlessly into battle, which is in real-time. Additionally, there are treasure chests and harvest points to interact with from which you’ll collect equipment, quest and crafting materials, and useable items. Much like in an MMO, items and skills can be assigned to hot bars on your UI.There’s also a text box in the bottom right corner which keeps track of the damage you deal, item drops, and other pertinent information.

Towns consist of friendly NPCs that give the area a more lively feel. Shops where you can buy and sell various items. Cathedrals where you can save your game and view cutscenes, guilds where you can pick up quests based on guild rank, and talk to the members of your parties. The story is told in fully voiced cutscenes, featuring dialogue between characters. The writing is light-hearted and full of pop culture references, 4th wall breaking, and a healthy amount of fan service. The fan service was a bit more heavy handed than the other games, but it was still a good time nonetheless.There’s a decent mix of zany antics and plot progression which keeps the ball rolling smoothly between story cutscenes and character interactions on the field. As such, the game has the authentic feel of traveling with a party of other players while playing a video game, despite the fact that you are playing a game about playing a game.

As usual, character design is fantastic. The anime art style is gorgeously detailed and colourful and each girl is uniquely designed to resemble a publisher, console, developer, or game title which creates a diverse crew. The writing is sure to keep you engaged and amused throughout the duration of the journey, which in standard RPG fashion will take you dozens of hours to complete the campaign alone. 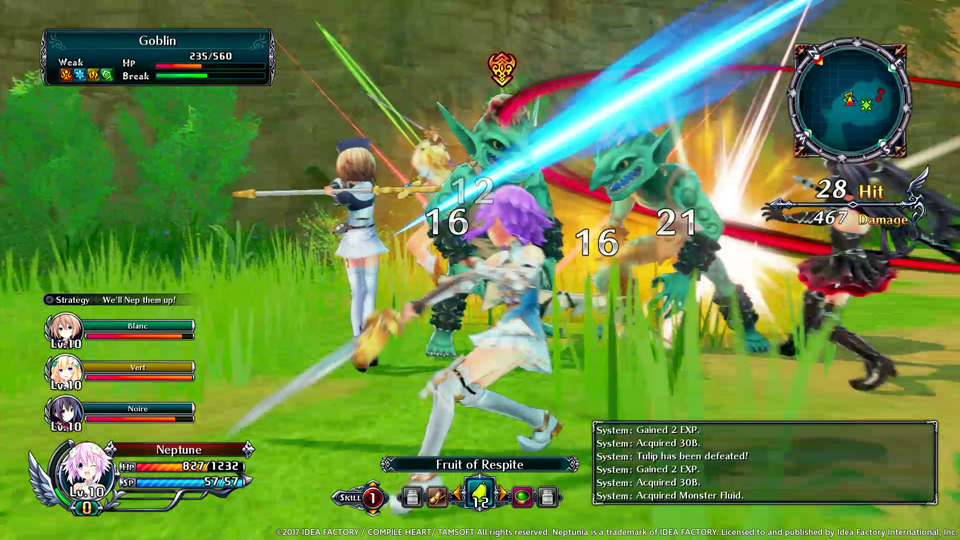 I’ve never regretted buying a game that was set in the Hyperdimension universe (no, not even the idol management sim one) and I’m not about to start now. I’m thrilled that the game came to the West and it’s a no-brainer for fans of the series.