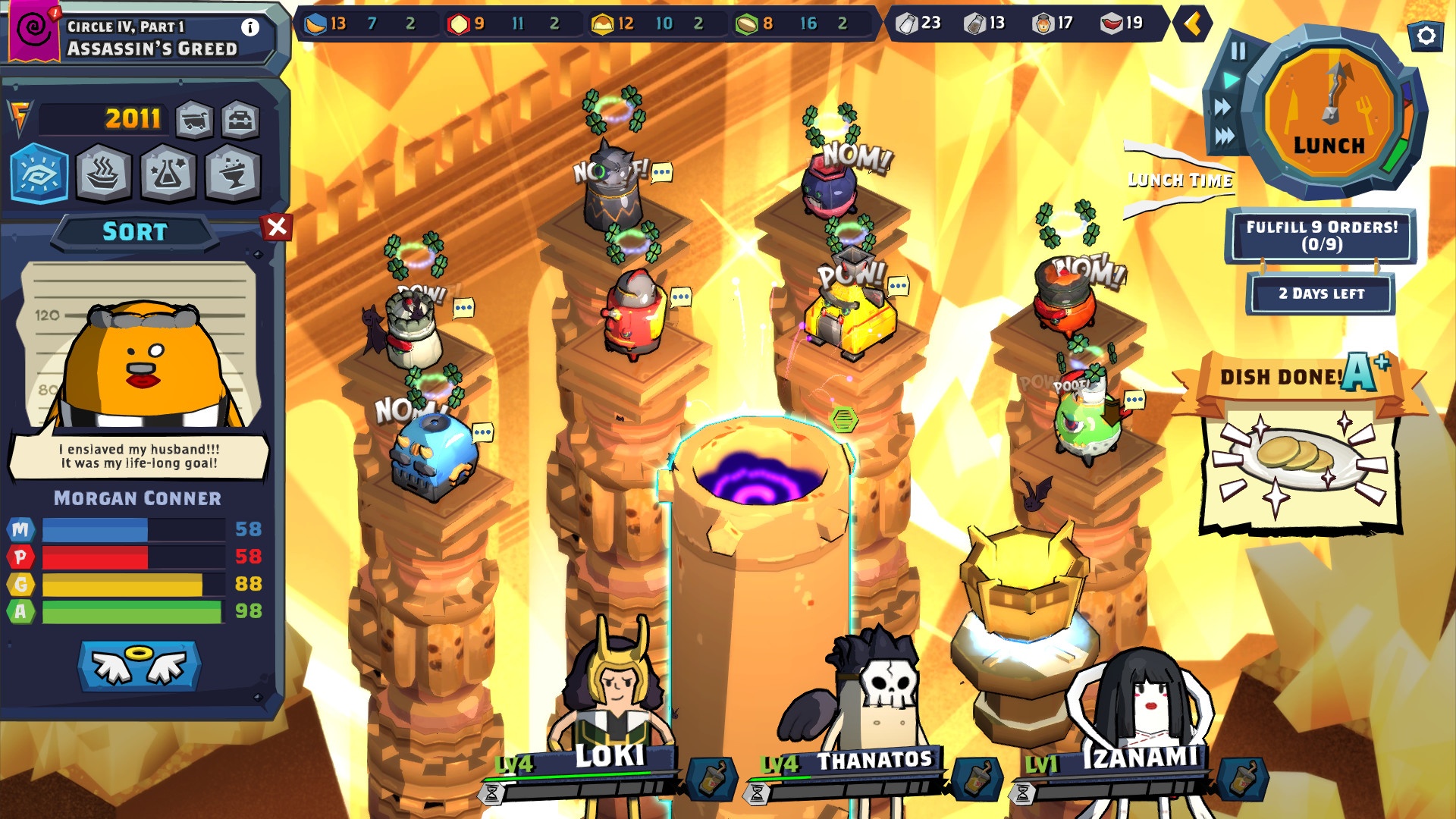 Holy Potatoes! What the Hell?! is the third game in the Holy Potatoes! series made by Daylight studios and published by Daedalic Entertainment. While in the first game you were the owner of a weapon shop, and while in the second you were the captain of a spaceship, in this third title, you’re just another little spud, one who happens to be sent to hell after dying, only to find out that you can redeem yourself and earn a ticket to heaven by pleasing various gods by serving as a Gate Keeper Chef and making your way down until 9th circle of hell.

The concept of the game is quite original, and the game itself is intriguing and funny. If you consider the kind of games the two previous Holy Potatoes! titles were, you can clearly see that this is a whole new type of game in the franchise, it would probably be best described as a cooking management game. That’s why I’ve been a fan of the series so far, their games are unique, funny, they don’t take themselves seriously, and most important of all, they’re extremely  charming and tend to to be fun to play and very accessible.

As a Gate Keeper Chef, you’re task is to process all sinners that arrive in hell after dying. When processing each one of them, you’ll get to see the crime they’ve committed, and sometimes they can beg you for mercy, to which you can give in or decline, and sometimes this has an effect on your productivity. Each sinner has a specific amount of points for malice, pride, greed and apathy, and these sins are inherently related to your ability to produce a specific ingredient. The way this works is, spuds arrive and you have to send them to stations, or torture machines if you prefer, that will process them into ingredients of varying quality, depending on the level of your station and the stats of each sinner. 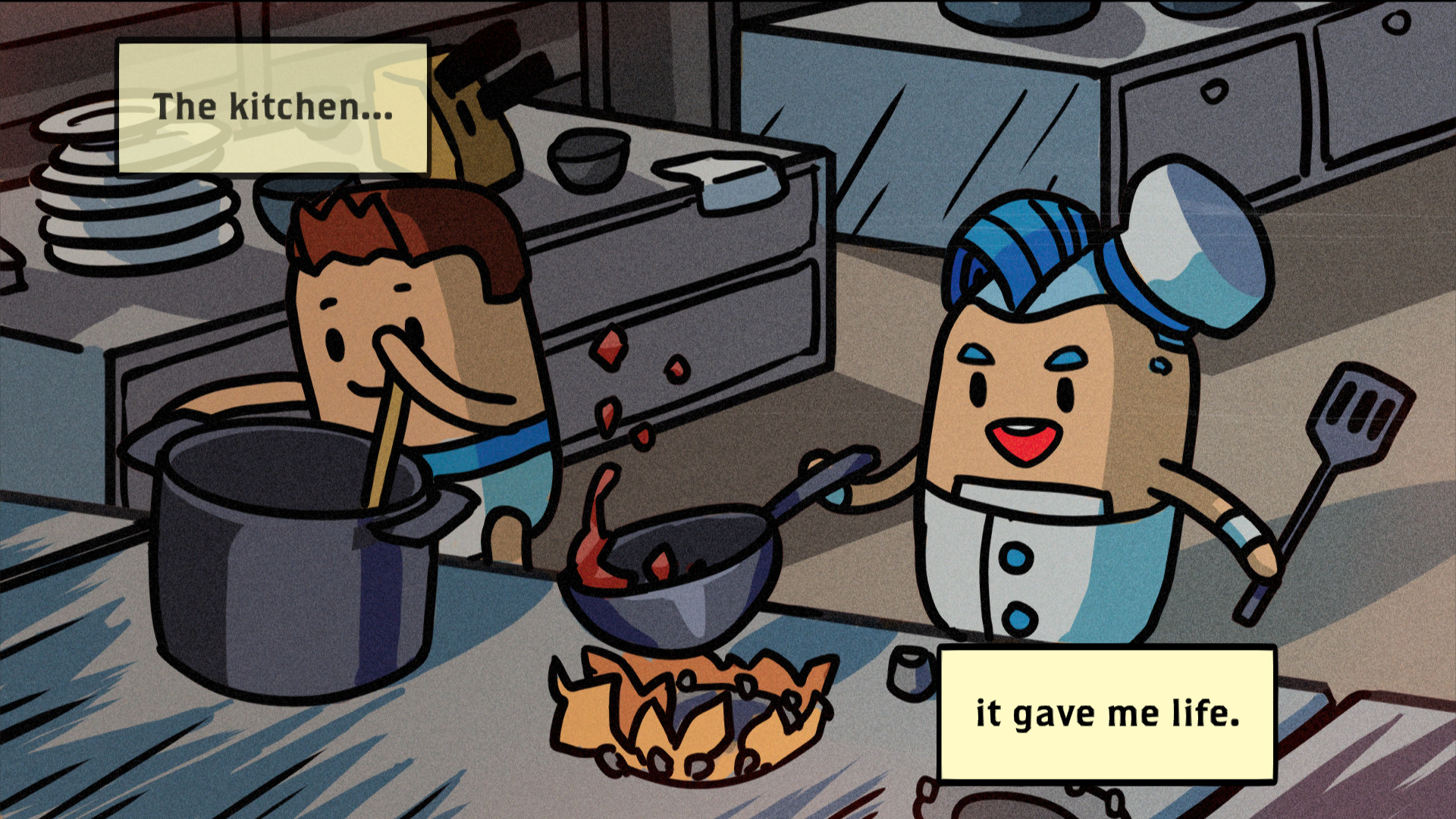 Initially there are four stations, each corresponding to one of the four sins, but soon enough your restaurant will be expanded and as you descend further deeper into the 9 Circles of Hell the game will introduce new mechanics that keep things a bit fresh. Nonetheless, stations have durability, which translates in the amount of times that they can be used, after which they’ll break but can be repaired after a short amount of time. This is where the game kicks in with the customization, and allows you to play around a bit more.

Each stage is played out across a set of days, with the amount days varying depending on how long you take to complete the stage’s objective. Each day is divided into different periods, there’s the prepping stage that you can use to obtain more ingredients and research new dishes, and then there’s lunch and dinner. During these two phases, gods will ask for you to serve them various dishes, which you need to do before they get tired of waiting and leave. If you succeed in fulfilling their order you get rewarded with favour, and if you fail, you lose favour. The better the quality of the ingredients that you use to make the meals, the more favour you’ll earn.

Favour can then be used to upgrade your stations, thus making them produce higher quality ingredients and endure more uses, and also, the more favour you have, the more Starch, the game’s currency, you gain at the end of each day. Still, whenever you descend to the next Circle of Hell, you’ll lose any favour and upgrades that you had previously purchased, but you’ll still get to keep your Starch, which can be used to buy consumables that enhance the quality of your dishes, how fast you process sinners, how long it takes for new sinners to arrive at the pit, as well as to buy some cosmetic items.

With that said, these gods are impatient and won’t wait too long for their food, so you might want to serve them a drink while you get your hands to work. While sometimes they ask you for a specific dish, which means you should be researching new dishes as fast as possible, some other times they’ll just ask you for a dish that has a specific ingredient in it, which gives you more headroom to play with the ingredients that you have in storage. There are also certain dishes that are best served during dinner or during day, so this is also something to watch out for when a god asks you for a dish with a specific minimum rating without specifying which kind of dish they want.

Once you complete a stage’s objective, you can choose to proceed to the next stage or choose to remain on that stage for another day, in order to gain more Starch and ingredients. This can be done during the rest of the days that are left on each stage after completing the mission, and at the end of each day you can choose if you want to remain or proceed to the next stage. If you fail to complete your mission before the day limit expires, you lose and have restart from your last checkpoint. This means that if you ever find yourself in a hard spot with few ingredients or money, you can always farm for a little bit to be better prepared for the next stage. 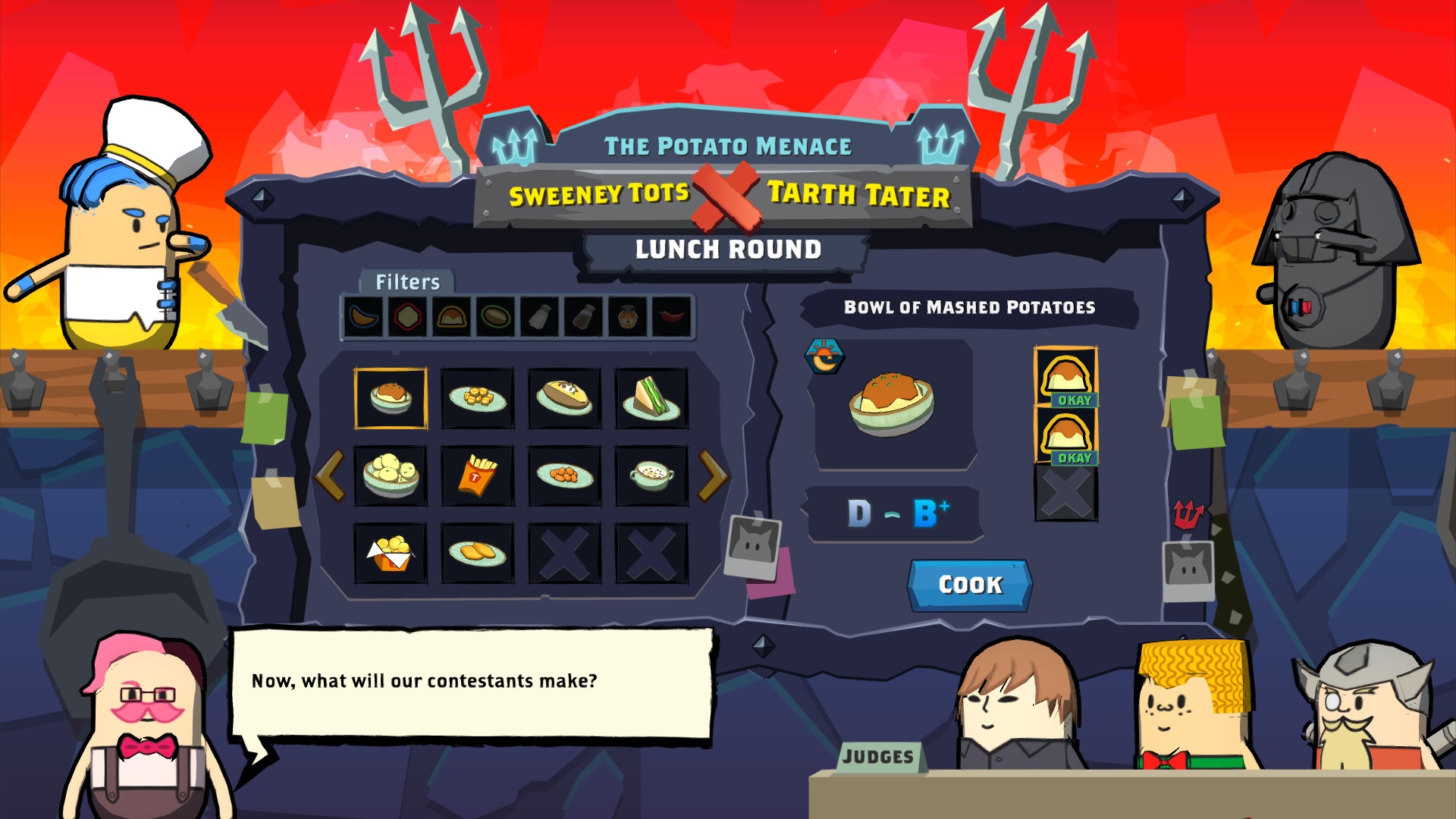 Now, as far as actual variety in terms of gameplay, there isn’t much to it, besides the variation of stage objectives, such as achieving a certain amount of favour or serving a specific number of orders. In essence, you’ll be doing the same thing over and over, repeatedly pausing and unpausing, but sometimes, how well you do is not only dependant on how good you are at managing everything, but you’re also depending on the game’s random factor for generating fresh sinners, which not always plays on your favour.

Nonetheless, that’s not everything the game does to keep you hooked, as besides the actual cooking management side of things, there’s also a visual novel element to the game, that takes place between stages, much like in the other Holy Potatoes titles. Truth be told, while I like the concept of What the Hell?!, I’m not really a fan of how the game plays and how you’re sometimes relying on pure luck to get the type of ingredient that you need. In any case, the dialogue sections are, like in the previous games, where the charm of the game is at. The dialogue is full of humour and references to pop-culture, which only add even more to the appeal of the game’s theme.

In the end, this third entry in the series is certainly a good effort in deviating from the studio’s previous games, while still retaining all the charm, the cheerful soundtrack, the humour, the character and joy that the series is so known for, even when you’re facing dire situations. If you’ve enjoyed the previous games, chances are you’ll like this one just the same way, even though, as a player, you might not feel like you have as much control over how things unfold as in the previous titles.