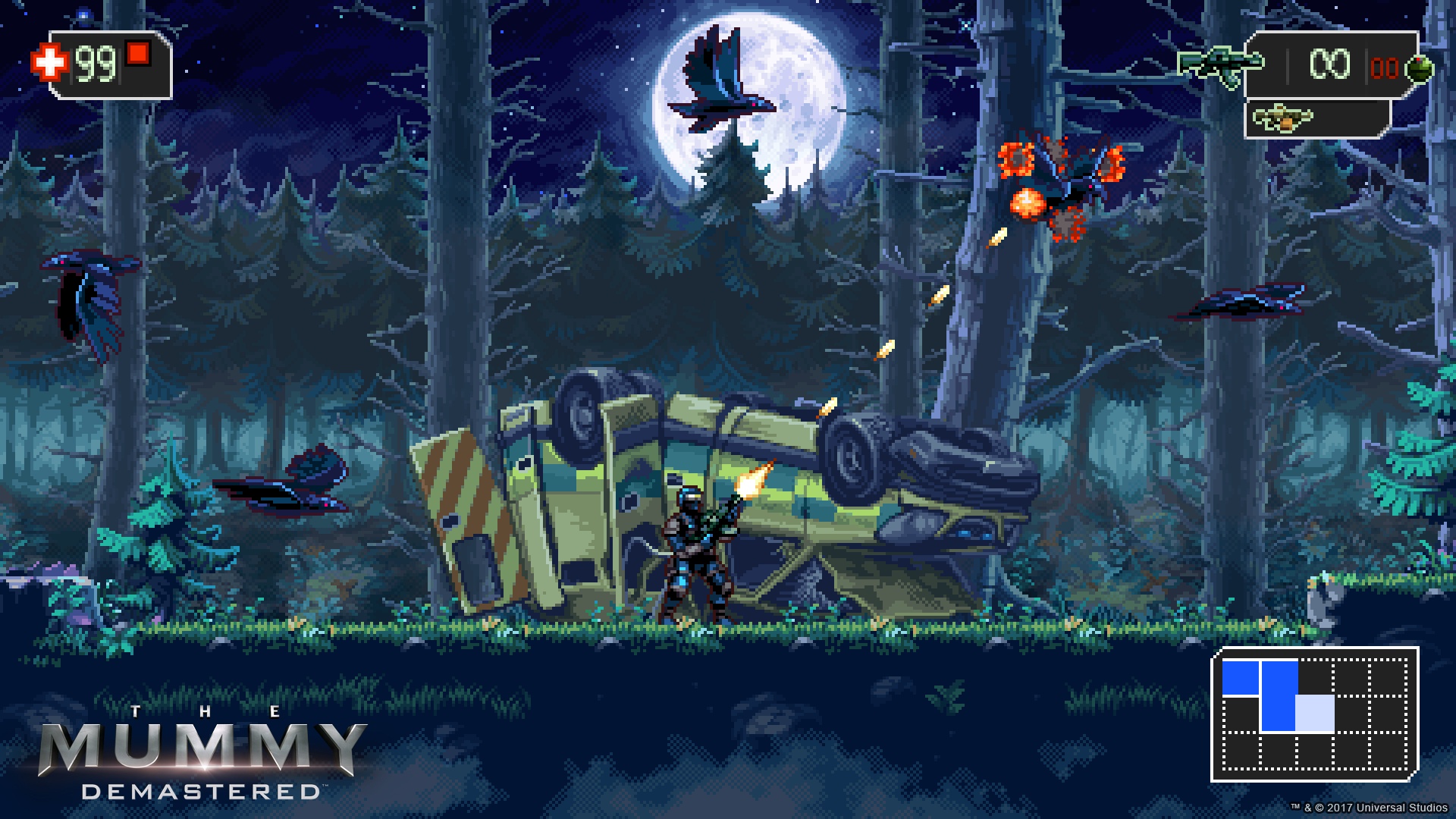 When I first heard about ‘The Mummy Demastered’ I was initially a bit skeptical about whether or not I would like it. On paper it’s a 16-bit styled metroidvania which is usually right up my street. Having said that, retro themed pixel art games are ten a penny these days and I’ve played my fair share of duds in the past. This coupled with the fact that it’s based on a movie that I’m not particularly interested in, and I thought the subtitle ‘Demastered’ was a little pompous and unnecessary. Why not just call it The Mummy? It wasn’t until I discovered that this game was made by WayForward (best known for their amazing Shantae series) that I really sat up and took notice.

The story begins in an underground chamber, somewhere in Iraq. You play as a soldier (actually, you technically play as a squadron of soldiers, but more on that later) who have been sent to investigate the disappearance of another team. Here you discover Ahmanet, a mummy who appears to have been re-animated. With her demonic powers she can spawn zombies from the dead and summon all manner of other monsters. Now your mission is to hunt down Ahmanet and destroy her before she wreaks havoc on the world.

If you’ve played any of the classic Metroidvanias in the past such as ‘Super Metroid’ or ‘Symphony of the Night’, then you should be familiar with this game’s structure. You are dropped into an expansive 2D world with a single basic weapon, limited health and few abilities. As you begin to explore the cave systems and various chambers you’ll encounter doorways and paths that are not accessible to you initially, until find the right upgrades. For example, some of the chambers are flooded with water and until you locate the ability to dive you’ll be stuck swimming across the surface.

After a short tutorial you are transported by helicopter into a cemetery on the surface of this game’s world. To help get you started waypoints are set on your map where you can find your first handful of upgrades. These include a slightly better weapon, an ammo belt, and a section of the game’s map. As you begin to travel underground you’ll start to encounter dangers such as skeletons, zombies, wild dogs, bats and all manner of other nasties. If you find yourself needing to backtrack then you can uncover new areas for your helicopter to land and transport you. This can save a lot of time that would otherwise be spent trekking through caves on foot.

The movement and combat in ‘The Mummy’ feels like a cross between Turrican and Axiom Verge. The marine you control runs and holds his guns in a similar manner to the protagonist in Turrican. You can fire in all 8 direction while on the move using the D-pad or left analogue stick, however if you wish to stand still and fire then you can anchor yourself in place using the shoulder buttons. In addition to firing an array of heavy assault weapons you can also throw grenades to deal a bit of extra damage, and once you’ve located the C4 charges you can even blow holes through walls to uncover new locations. 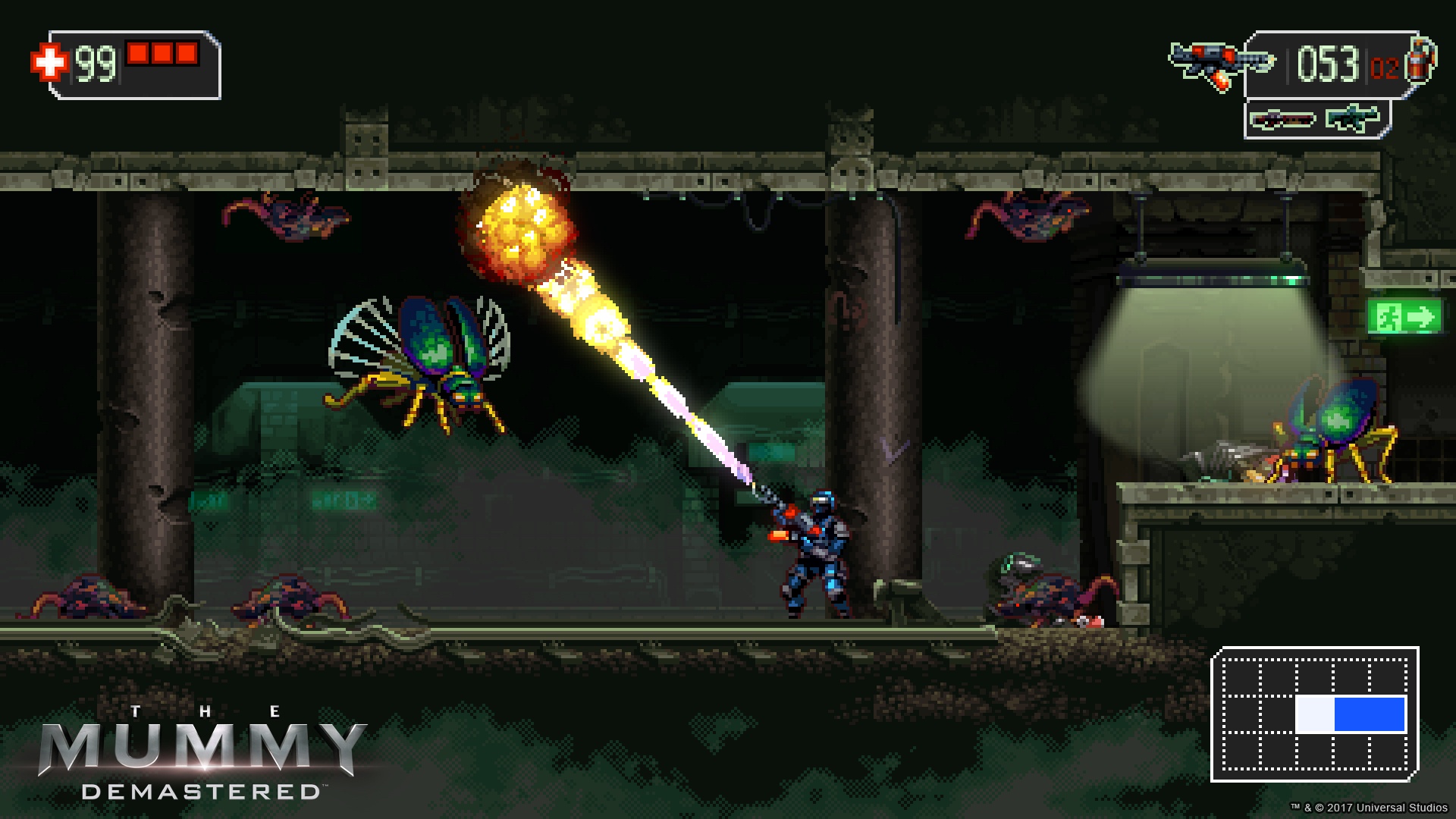 I could gush over how well this game controls all day long. Honestly, it handles like it’s on rails. Initially your character can run, jump, duck and forward roll. However as you get deeper into the game you learn how to climb across ceilings, sprint and dash. The sprint and dash moves are very reminiscent to the special moves that Samus is taught in ‘Super Metroid’, however in this game they are far easier to pull off. This combination of different moves makes darting through the world map a joy to behold while blasting all the enemies in sight. The controls feel really intuitive.

As you explore around you’ll encounter a variety of different locations such as dungeons, science labs, abandoned city streets, a clock tower. The various settings all look stunning with their high quality pixel based textures, atmospheric effects such as mist and fog, and some really lovely backgrounds. I particularly liked the moonlit settings in some of the external areas and blood red gothic lighting in the clock tower.

On your journey you’ll eventually bump into Ahmanet, who appears to be growing stronger since you’re initial encounter in Iraq. Actually you’ll bump into her on a number of occasions with her summoning a boss for you to fight each time. She summons four large bosses in total along the course of your journey. On your fifth encounter you get to have a final show down with her.

The bosses are fun, although not particularly challenging if I’m honest. I really enjoyed the boss in the clock tower as in addition to ploughing it full of ammo, you’ll also have to climb the various gears and moving platforms to keep yourself at a safe distance from the spiked floor. Again, comparing this game to Super Metroid, some of the boss fights were clearly inspired by the mid 90s classic.

The music that accompanies you on your journey is pretty good. It falls slightly short of the wonderful Shantae soundtracks which is the level of quality I expect from a WayForward title, having said that The Mummy’s soundtrack is not to be dismissed. The title screen music is a thumping tune which is very reminiscent of the music you’d expect to hear in an early 90’s action game. In contrast the music you hear in game sounds striking similar in both instrumentation and melody to Symphony of the Night’s soundtrack. 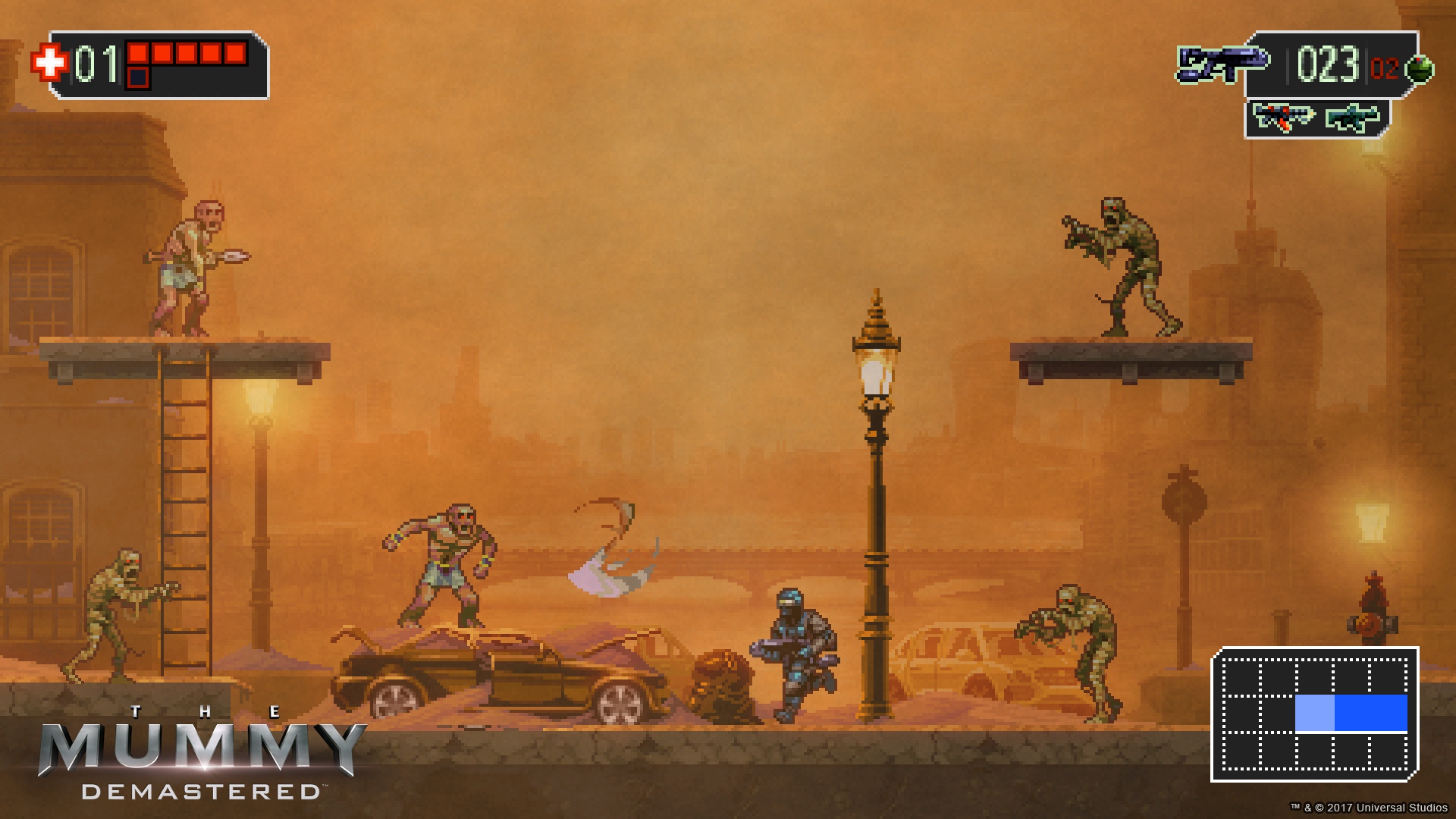 Overall I think ‘The Mummy’ is an incredibly fun platform shooter that is definitely worth buying, however I do have a few minor criticisms. I beat it comfortably within 5 hours of in game time, and despite the fact that I went in blind I uncovered 99% of the map. Not only did it feel a little too short, but there clearly isn’t much left for me to go back and mop up. I did start a new game right away in an attempt to complete a ‘no death run’, but there’s no extra modes, New Game plus or higher difficulty settings. In fact the game only has the one level of difficulty which I thought was rather easy on the whole. I think this game could have benefitted from a couple of extra map areas and another boss.

There were a couple of design choices that I’d also call into question. Although there are a few rooms where it’s possible to completely refill your ammo, there isn’t an equivalent medial room for you to refill your health. As a result you’ll occasionally need to farm enemies and crates whenever you need to regain some health points, which can be tedious.

If I could only choose one thing that I could change in this game it’s the respawning system for when you die. If you do happen to get killed the game will auto-save and the soldier you were playing as becomes a zombie. You then carry on from your previous save point as a new soldier who has to hunt down the zombie in order to retrieve all the gear that was lost, including all ammo, weapons, and most importantly the extra health tanks. This caused me to end up in really infuriating situations where I was stuck as a base level character with little to no health in a highly volatile area late in the game. I understand that the developers were trying a novel method of respawning to heighten the drama, but it really isn’t practical and is far more aggravation than it’s worth. I personally would like to see this patched out of the game, or at least be given the option to reload my previous save after I die.

From a technical standpoint I experienced no crashes or freezes. I did encounter what I suspect is an odd bug on the last boss, as towards the end of the fight it appeared to go idle and just stayed still as I pumped it full of lead. I’ve beat the last boss twice and this happened on both occasions. There were also occasional patches where I experienced noticeable drops in frame rate, however I’m not entirely convinced that this is all the game’s fault. I suspect it’s partly due to my PS4 getting a bit old. It may be time for an upgrade.

In conclusion, I had a really good time with this title and I’m currently enjoying a second play through. Is it a perfect Metroidvania? No, but I still hold it in pretty high regard. It would have been nice if it was a bit longer and harder. This is a title where I’d be happy to see an expanded sequel, or maybe a DLC campaign. I advise checking this one out.