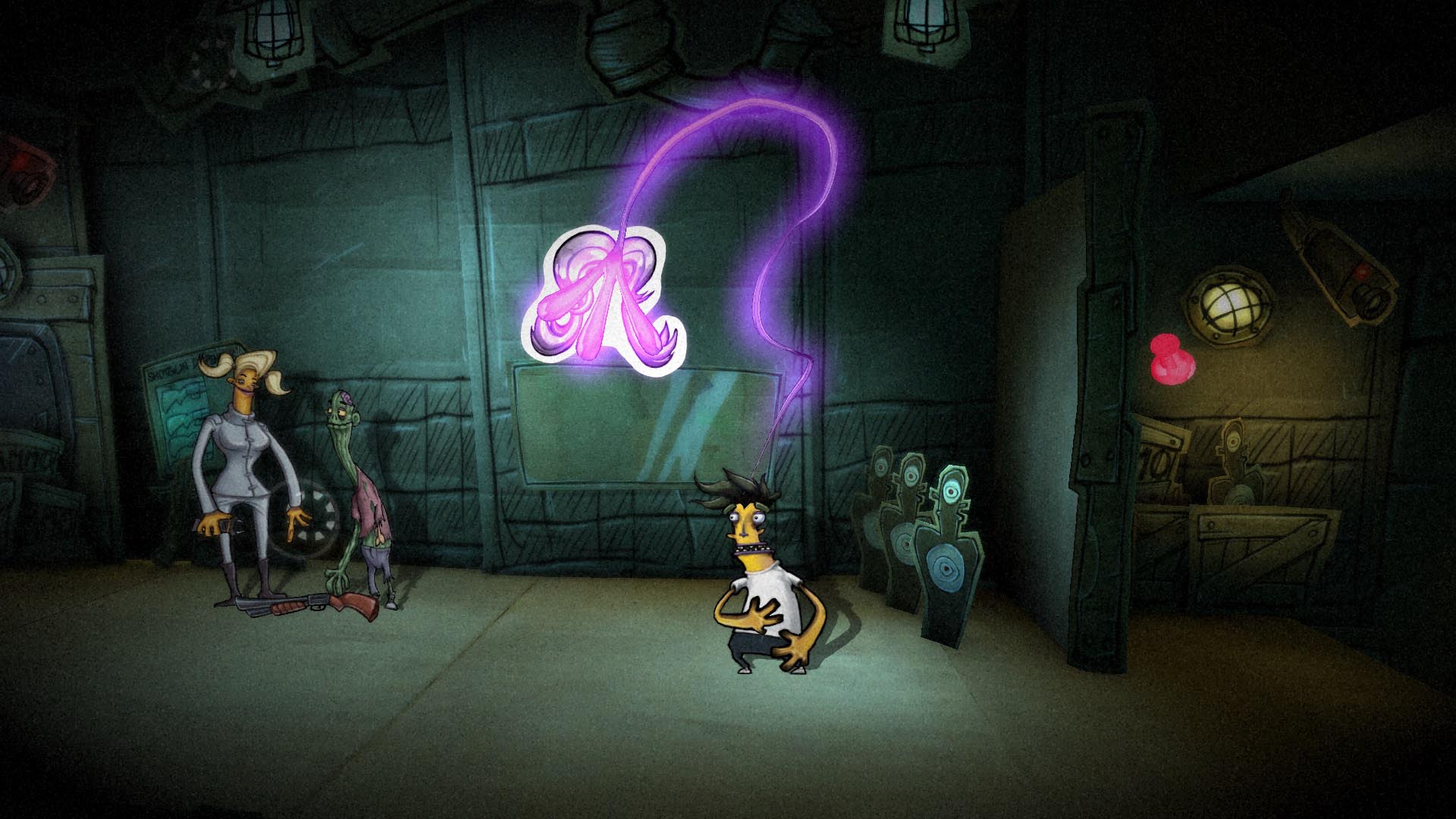 Sometimes we just need to laugh. That’s all. We have a ton of comedies around the globe and on every streaming platform you can think of, but so many comedies come with catches. It’s funny as long as you have the same political beliefs. It’s funny so long as you don’t mind incredibly gross or edgy situations. It’s funny, but first it has to be super sad for like 20 minutes. To hell with it all. To have something that’s funny and non-polarizing is a blessing, and I’m so glad that a game like Stick It To the Man has finally come to the Nintendo Switch.

Ray is just your average hard hat tester who wants to make a few bucks, have a good day and get home to his girlfriend without falling in too many holes. Unfortunately, on the way home one day he gets struck in the head by some kind of mysterious, government secret-type thing and now he has a giant pink arm growing out of his head that maybe only he can see. The arm can do a lot of stuff: it can grab things, it can read minds, and…ok, it can do those two things, but you gotta admit, that’s impressive. But the suits who lost the arm are keen to get it back ASAP, and they figure that framing Ray to give them leverage on arresting/dissecting him is the best approach. Ray, neither pleased nor keen on this whole plan, sets out to clear his name and to also help people as best he can along the way. 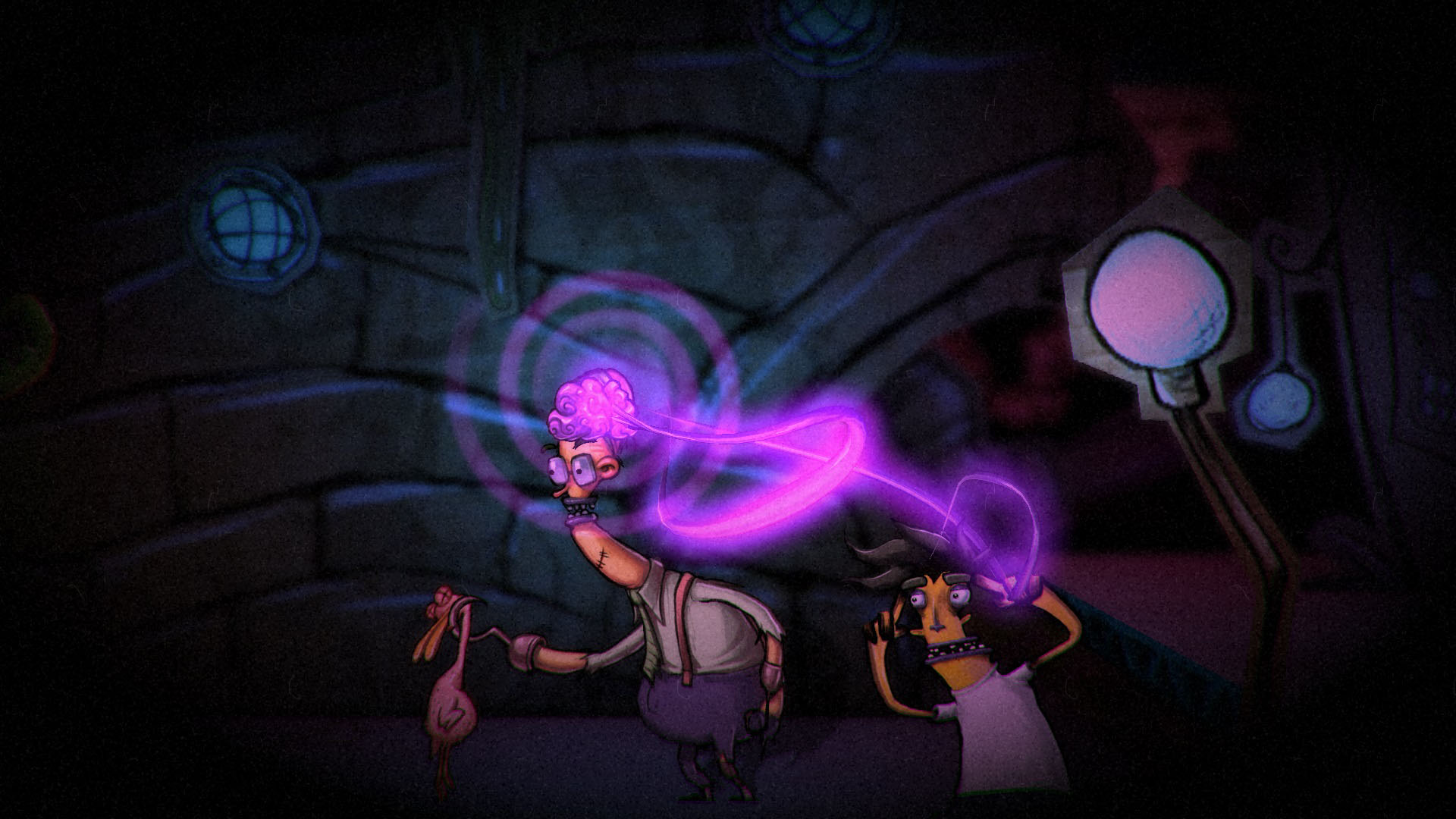 Stick It To the Man is an amazing concoction of a game, combining the vessel of platforming with the execution that can best be described as point and click puzzle solving, though neither really seems to fit it best. Basically, running around and grabbing things, reading minds and finding where things go in a timely fashion, but that doesn’t sound like a clear and credible description of the game. Ray’s glowing pink arm works to pull him up to hard-to-reach heights, but also can peel back papers to reveal other characters and situations that are directly relevant to the problems that he wants to solve currently. Oh right, everything’s made of paper. That’s something that I should have mentioned and kind of plays a part in the game. Sometimes the cast is incredibly referential about being made of paper, sometimes they seem to forget entirely and jump into un-paperlike situations. It’s never anything jarring or too bizarre (which is something, considering how this game is) but it does happen.

Your mind reading abilities are incredibly handy to figure out what needs to happen next for characters and to trigger the appearance of some items. For example, hearing why a dude is sad is what makes his tears something you can tangibly grab, and then add that to a sadness stew, perfect for getting a piece of human flesh to tempt a crocodile. That’s all in the first ten minutes and that’s actually a cohesive part of the puzzle. Mostly, though, mindreading is a great way to hear and read the endless amounts of well-written, funny dialogue that’s peppered throughout. For some reason, my favorite is still a bit character in the 3rd chapter who can’t stop thinking about Silver Surfer for the NES. Probably because I, too, cannot stop thinking about it. Regardless, you’ll want to check everyone’s brains, sometimes multiple times, in order to get the most out of the game and also to progress it forward.

The platforming aspect feels forced in the beginning but actually makes the most amount of sense in a game like this. Let me explain. If Stick It To the Man were just a simple PnC adventure, it would be short, flat and pretty mundane. Sure, it’s got Ryan North’s name attached, so you know the humor is good, but simply throwing stuff onto a singular plane and calling it a day isn’t innovative. By having Ray leap about, the cities and areas feel more alive, and it also adds this sense of importance to what he’s doing, a bit of action for a guy who’s desperately just trying to get things back to normal. Also, there are save points everywhere in the form of giant printers: if Ray takes a wrong step and ends up getting shredded, a new copy of him just prints right out. There’s zero risk in the exploration, and you can use that extra time to see exactly what’s ahead of you, how to handle it and what you can do in terms of solving the puzzles and the mysteries.  Not to mention there’ll be several times when running away or getting somewhere in time is all you can do, and where’s the fun in just clicking the mouse? This is where you can put those latent Mario skills to use. 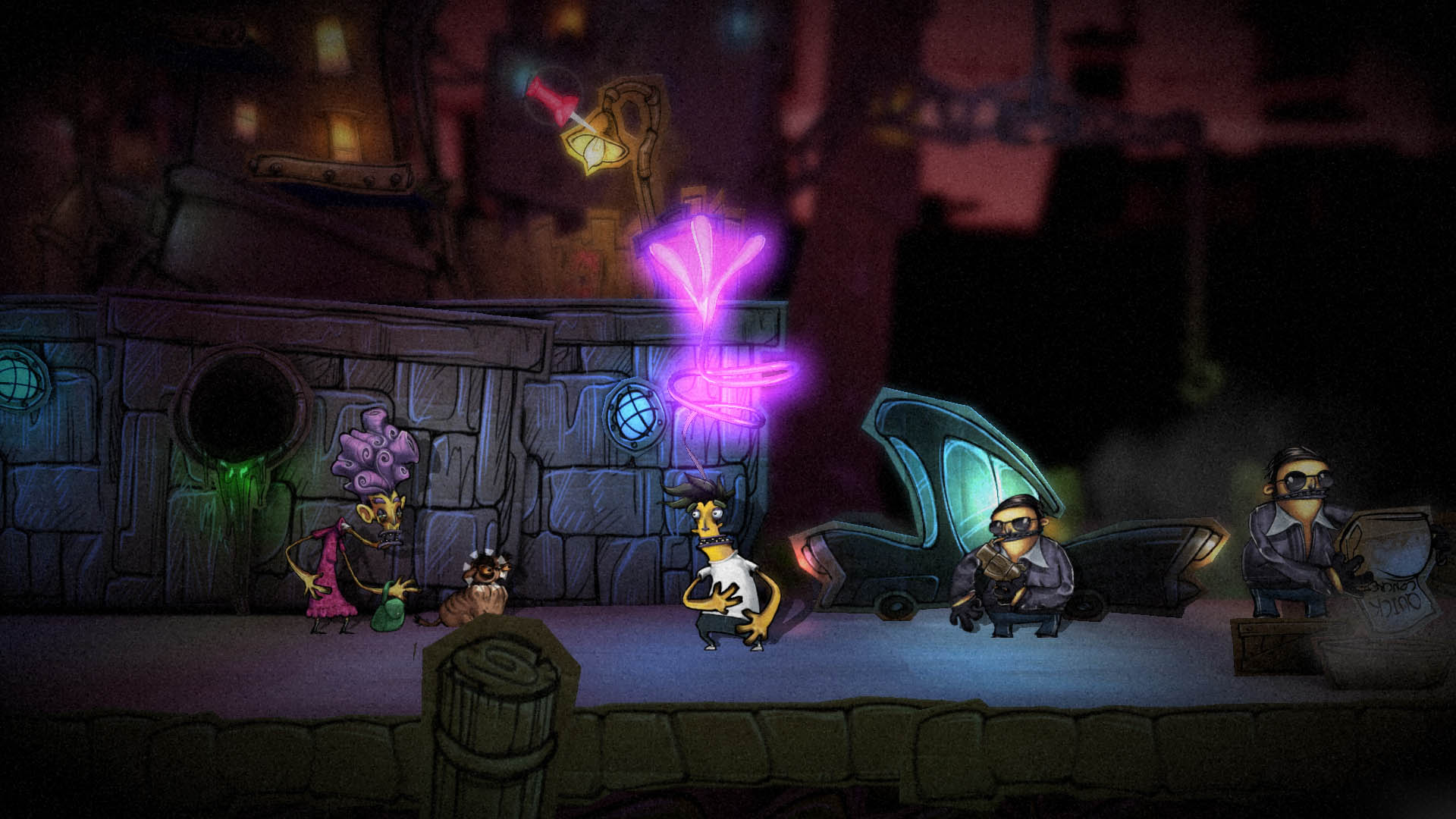 Stick It To the Man is also incredibly logical, something that doesn’t always gell with PnC comedies. Rather than carry around a huge battalion of stuff that you just try and fail to use with every other thing, you only really carry a couple pieces of important with you at a time, and using one then leads to the next thing, and then the next. You still might run around to figure out where it goes, but it’s not an endless guessing game of “can I fit this ramrod in a parrot” or whatever other nonsense Monkey Island made me go through the first time. By limiting the number of items, you don’t feel the weight of carrying around the same bottle of grog that you got in the very first chapter. When you pick up a gross fish cake or a dead car battery, I know I’ll be using it soon enough.

But things are simply just fun and funny within Stick It To the Man. I enjoyed watching Ray run around and figure out what the hell was going on with him. I loved hearing the menacing inner monolog of a stuffed animal or the crazy rantings of the one psychic who could actually see my phantom hand. All in all, it’s a good experience, and one that did well on the PC but still, in my opinion, flew under the radar. I hear people talk about PnC games all the time, and this one just doesn’t come up often enough. It’s good to have humor and joy in the world, and, even if Stick It To the Man can be a little dark at times, it’s still mostly just light all the way through. If you can’t find a reason to laugh while playing, I think you’re taking life too seriously. If you’ve never played, pick it up on the Switch so you can bring your joy wherever you go.