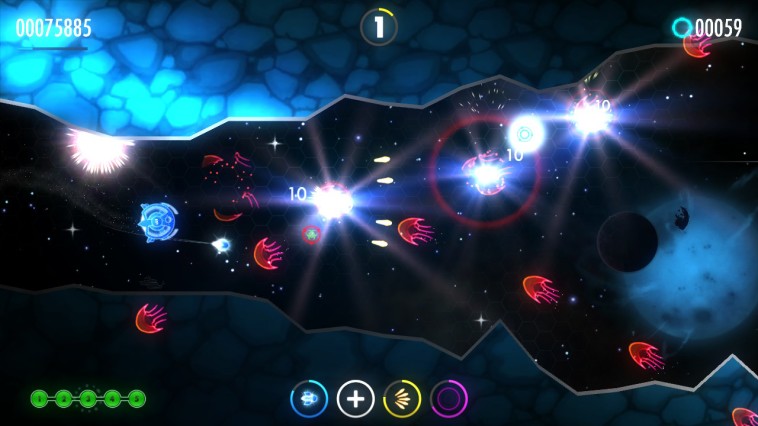 Star Ghost is an arcade shooter that comes to us via Rainy Frog, who brought Piczel Lines DX to the Switch just a few months ago, and Four Horses, who ported Kid Tripp just last month. Star Ghost, however, is a far cry from Piczel, as this is probably one of the most simplistic arcade shooters that I’ve played in the past decade. I mean, counting the Neo Geo titles that I reviewed in droves, this is still one of the most straightforward titles you can imagine in terms of being a horizontal shmup. Even now, I’m not quite certain if it counts, because I couldn’t even control my shooting.

Your role in Star Ghost is simple: you’re a fighter pilot in a distant future on a planet that may or may not be Eartth. The Megaton fleet, an enemy alien military, has shown up at the perimeter of our galaxy and isn’t responding to any attempts at contact. Assuming the worst, you get sent as the first line of defense and, surprise, the Megaton army is ready to fight. It’s not totally clear why they only sent one ship for an entire invading fleet of hostiles, but I imagine it’s because you’re the best or the budget is low. In any case, you’re the one dude, and get ready, because there’s plenty of ships.

The first thing you’ll need to understand about Star Ghost is the control scheme, which is a bit strange. You don’t have any real directive except for your single button, which thrusts you upward. Release, and you float downward. You shoot automatically, you move forward automatically, and you technically don’t run out of bullets. Investigating the “Flight School” option when you start shows that you do have the ability to aim your shots up or down with the left control stick, but I advise to use this with caution. Every other game I’ve played has the left stick as navigation for my actual movement, and the right stick is for bullets. As a result, I kept getting the hallucination that I could control where I was going, which caused me to smash into enemy ships. Better to just accept my bullets fire out straight ahead and take it from there. 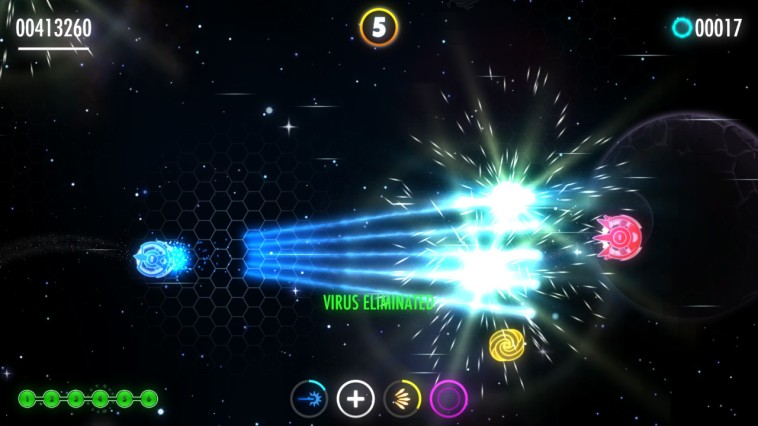 I wanted to like the powerup system that came with the game, but Star Ghost gave me a lot of love/hate feelings towards it. On the one hand, you don’t just immediately max out as a super powerful being and call it a day: most of the powerups slowly deplete over time, causing a need to keep successfully shooting down enemy ships and re-gathering supplies. On the other hand, I felt they were sometimes a bit too few and far between, while the nonessential drops (shields when I was fully charged, the blue disks that I guess are currency) were quite plentiful. Getting the highest fire rate with the widest bullet density makes you feel awesome, and then losing that due to degradation sucks. I did, however, like that Star Ghost introduced something new almost every sector that you progress into, so that it felt like your ship was going somewhere instead of just existing.

Speaking of density, you’re never going to feel overwhelmed by enemies. Though Star Ghost doesn’t take it too easy on you, there’s an understanding that not being able to fully control your direction means that flooding the screen with hostiles is deeply unfair. So you get occasional waves that can be dealt with simply by not crashing into them. Making sure you shoot as many as possible before they shoot you (and not everyone shoots) means getting a better score and picking up more powerups, though watch out of the viruses. The virus, which disables all your weapons for a period of time, was a nice touch and a clever addition. The first boss that you encounter drops the viruses like crazy and made for some hectic combat and dodging.

Star Ghost’s biggest focal point is also one of its greatest downfalls for modern gamers. Since this is being treated as a true arcade shooter, that means you have exactly one life to get as far as possible and hopefully meet and destroy the Megaton warship at the core of everything. But you can take four hits before exploding, and exploding means starting from the very beginning. Don’t get me wrong, keeping your shield up (and replenishing it) means staying alive much longer, and it’s far from impossible, but players might want to take a break in the middle. If you want to put down Star Ghost, make sure to hide the Switch, because there’s no save points, and closing the software means goodbye progression, hello back at Antares. Plus, seeing what you can eventually do (repulsion system, auto-shield repair) makes playing through the earlier levels all over again borderline agonizing. Still, anyone who’s a veteran of the shooting games will understand this and be just fine. 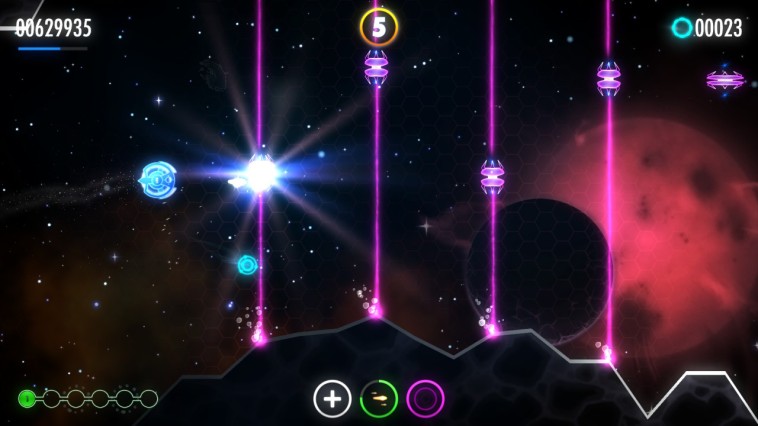 Lastly, I did really enjoy the soundtrack of Star Ghost. I’ve been watching a lot of Future Man, which has left this impression of The Last Starfighter and the 80s in general fresh in my mind. Star Ghost has a phenomenal, synthetic sound to it that really helps put a modern spin on the classic sounds of the arcade. The music keeps you pretty engaged with the simulation, and there’s enough variety in what you hear that it doesn’t sound monotonous and recycled. If anyone is a fan of retrofuture, you’ll find some good tunage ladened here, among the stars.

Overall, Star Ghost was a fun but brief game. I can definitely see myself getting back into it once the memory cools a bit, and it’s certainly simple enough, though I wish I could remap some buttons to thrust with the C buttons and aim with the right stick. Personal complaints aside, this is a pretty solid, short indie shooter, and it’ll definitely find a good home with the right players.