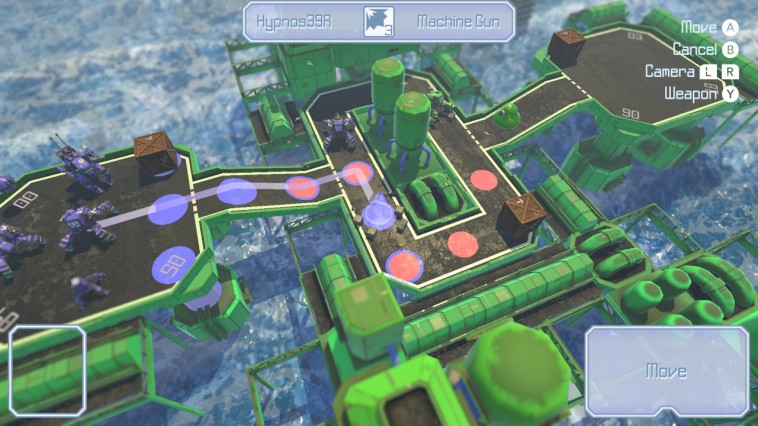 You know I’m all about exclusives. If there’s one thing Nintendo has done and kept consistent over the year, it’s having some of the best exclusive games and characters that the world has ever seen. From Pokemon to Mario, Kirby to Link, the stable of Nintendo specials are ones to admire and accept as the greatest parthenon of locked-down entities you could imagine. So when I see another game is coming “only to the Nintendo Switch!”, I get a little excited. What magnificent adventure will I only be able to enjoy on Nintendo’s wunderkind? The answer, it seems, is ACORN Tactics, a game that I’m still not sure if it’s satire, parody or a bit unaware of it’s own humor.

You’re the new commander for the ACORN group, a military branch who’s inexplicably been saddled with the task of dealing with alien blobs that have invaded from outer space. A very quick encounter reveals that the blobs are hostile, angry and come in a variety of strengths and colors, ready to dish out punishment and take over the world. Undaunted, you get advice from your different scientists and generals on the best way to fight back against these disgusting creatures. Using a series of mechs piloted by brave and kind of floppy pilots, you discover and research new technology and build your fighting force in an effort to keep the planet safe and save humanity.

The first thing that really struck me was the graphics. An underlying theme throughout ACORN Tactics was this combination of high quality and hokey that kept showing up again and again throughout my playthrough. On the one hand, the talking heads of everyone I see look like puppets. The literal way that they come up and down in their frame looks like someone swapping out dolls as fast as they can, There’s no movement to their mouths, just vague eyebrow twitching. The alien blobs themselves are also just weird, gelatinous cube inspired things with a literal eyeball and bone/meat combination sitting inside. It felt so low quality I was sure that there would be far more detailed beasts along the way, but it doesn’t really ever get much better. 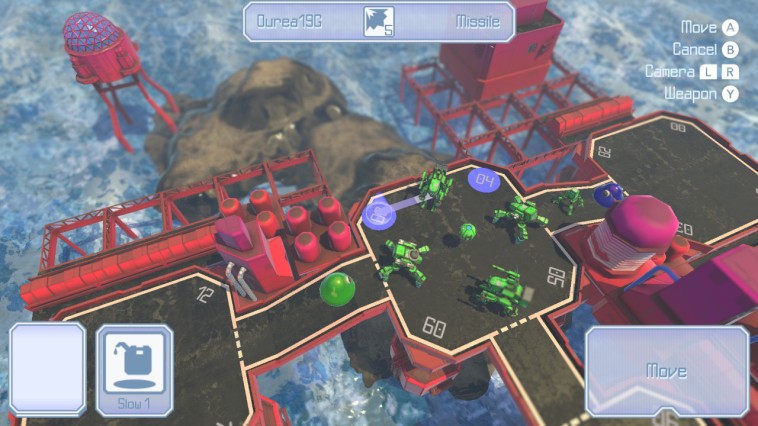 Then again, the water effect is gorgeous, something that really caught me off guard. The level designs are simple but effective, and everything from the rig platforms to how the mechs shoot and travel was actually quite nice. So there’s clearly the ability to create some really strong and powerful ideas, but these were obviously ignored during the creation of the people and the blobs. Maybe that’s to help boost a bit of the tongue-in-cheek humor that crops up every now and again? In any case, it was a bit jarring.

That same kind of duality exists with the soundtrack, which is an odd mishmash of older chiptune notes and more modern video game scoring. There’s not a clear, defining line of what separates the two, and you’ll hear tuneage from two totally different sounding sources being played at the same time. At best, it comes across as eclectic and only adds to the oddity of the game. At worst, there are times when I had to simply turn the music off because the dissonance caught me so poorly. I think that it was a cool idea, and it has moments where it really works, but, when it doesn’t, it seriously doesn’t.

As for the gameplay, ACORN Tactics works out for a good, turn based strategy game. Mechs come in several shapes and sizes, with only more and better ones being unlocked as your scientists discover ideas and ask you to fund their research. There were very few moments when I didn’t have the cash to fund something or had to make a decision as to what I wanted funded first, so players need not be so stressed about planning their cash allocation. The biggest deciding factor as far as having money is not letting your mechs get blown up: besides the guilt of having a pilot maimed or worse, you take a hit needing to create a new mech from scratch. Planning well will keep you afloat in cash for the duration of the game.

And the AI is pretty on point for such a tactics game. The blobs have a keen “sense” of things, but they’re not omniscient. By planning out a route carefully, there were a couple stages where I could minimize the damage entirely and have my personal favorite duo (sniper rifle and shotgun) do all the dirty work for me. Once armor becomes a thing for the blobs (and it does happen pretty early on) you have to make some hard decisions about who’ll take a hit and draw fire while the others get down to business. Making sure your mech survives the battle is an autoheal for the next stage, so know when to hold em and when to fold em. Additionally, don’t fall into comfort zones and refuse to try new mechs. Sure, you’ve leveled up your machine gun to five stars because you’ve had him since the start, but there could seriously be something better on the horizon. 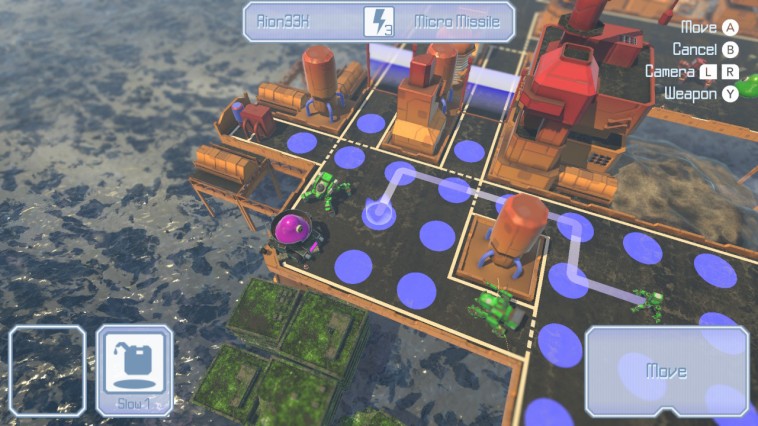 And the HD rumble! I stopped being obsessed with good HD rumble shortly after I started having far too many games on my plate, but I do need to acknowledge the effort put in by Thomas Hopper and his team. The stomping of the mechs, the feedback from getting shot or even the gentle hum of the machine gun are absolutely delightful. When you’re going to bring an exclusive to the Switch, making sure you’re actually making use of what the console can do is so important, and I’m glad to see these features weren’t ignored.

ACORN Tactics isn’t too short, but it did feel a bit brief in comparison to the other turn based insanity that’s currently on the Switch. Still, brevity is often better than dragging things out, and ACORN Tactics felt like it fit nicely onto my plate. Whenever I simply wanted to do a mission, the random mission button was, well, honestly the most batshit thing I could imagine. You get a warning right at the top that it will seriously take you to any random mission regardless of continuity, so it was borderline exciting to hit it and jump around (and promptly get my ass kicked). If they had something like this in Final Fantasy Tactics it would probably be a massive spoiler, but I encourage ACORN players to give it a swing early on just to learn a punishing lesson: the blobs won’t always be simple, and you are not ready.

This is a fine addition to the library, and a great one for fans of the tactics genre who maybe are tired of needing to summon demons or deal with Rabbids. If you’re patiently waiting for Advance Wars to get a Switch port, ACORN Tactics scratches the itch and leaves you pretty satisfied.