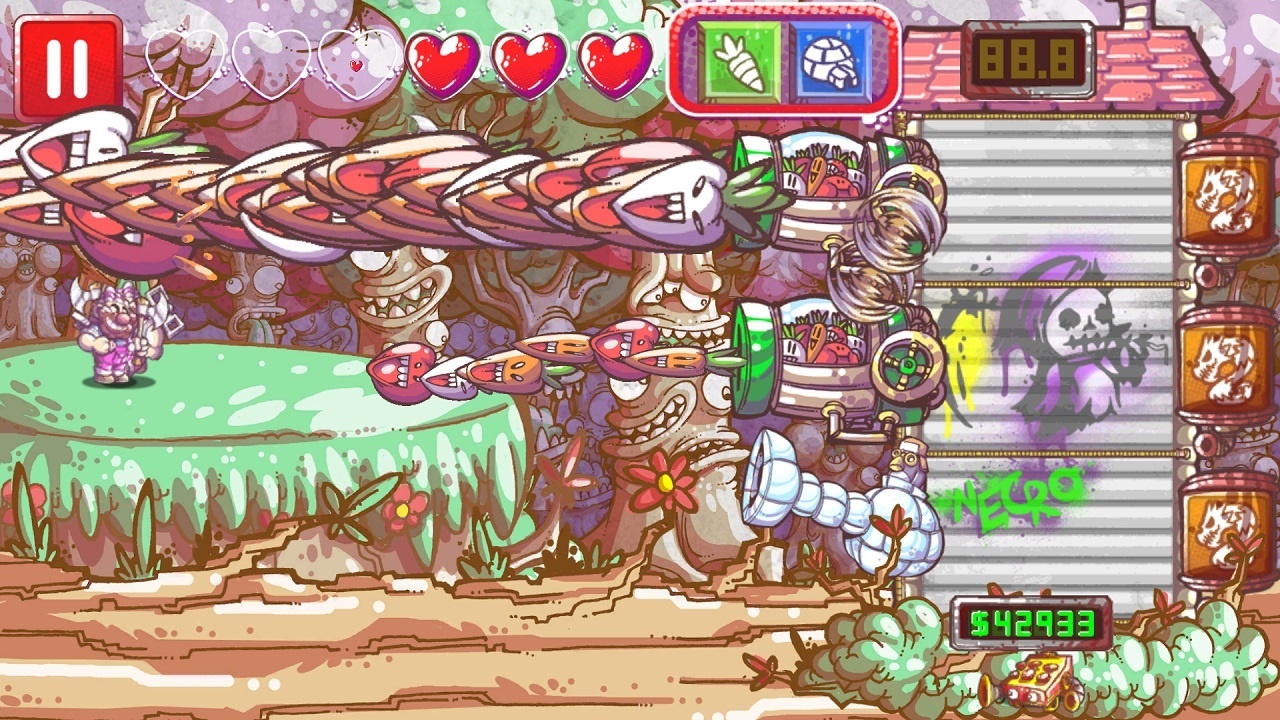 Tower defense is a tough nut to crack on any platform or operating system, and none moreso than the console market. While there’s plenty of availability of quality titles on mobile, the enter category is a bit played out and tends to either lend credence to the classics or to the newcomers that have flashy IPs to hide behind. On PC, it’s still kind of a rare thing to find a lot of tower defense titles that have replay value, but the smaller install size coupled with the generally cheaper price point (or, again, strong IPs) keep a forward movement enough for developers to at least consider ports. But console is a sticky, tricky land to plant your flag, because people are already considering every other game type and every other landscape to invest their time and money. So I was a bit hesitant when I went into Gunhouse, a title that I’d never heard of before and couldn’t tell if it was a Nintendo Switch exclusive or not (turns out it isn’t, but it’s relatively obscure out in the big world). Still, with Necrosoft at the helm and some pretty dope music to ride on, I left my inhibitions at the door and pressed on.

The plot, at the very least, is sort of novel and a bit on the darker side of humor. Gunhouse is none other than an orphanage, and it’s currently being invaded by aliens who find orphans to be particularly delicious. Rather than let a bunch of extraterrestrial carnivores consume all of your housing mates, it’s decided that certain actions need to be taken to get rid of this invading force. I’m talking, of course, about creating a number of giant turrets and explosions in order to destroy all those who would seek to eat orphans. I have to hand it to Necrosoft, I normally couldn’t care less about why I’m building towers other than to shoot at things, but this at least is one of the most understandable and reasonable courses of action imaginable. Not to mention all of the guns that you build are beyond awesome, firing off rounds of glowing fire, destructive poison and many others as you progress through the days and weeks of this invasion. 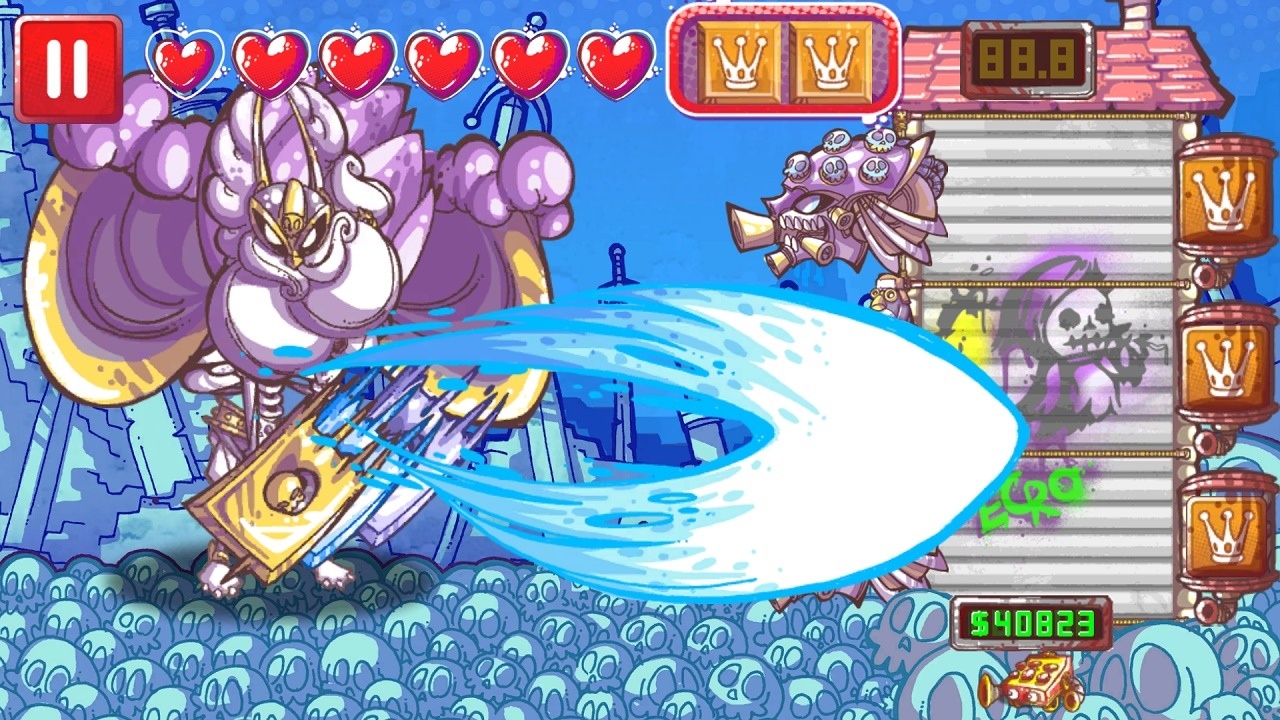 And I really gotta commend the appearance of the game, because it’s my favorite (even more so than the dope, atmospheric soundtrack). The cartoonish design has a distinctly “street art” aesthetic to it, which feels simultaneously punk and pop in the same swing. I absolutely adore the way everything comes across, from the complicated, multi-faceted weaponry to the simple metal shutter than slams shut in between waves while you reload your artillery and get ready to take out the next horde of enemies, be they simple ground troops or a massive tank/helicopter hybrid that requires all of your ammunition in order to stop the orphan snatching. There’s nothing I hate about the appearance: it reminds me so much of the idea of Jet Set Radio Future that I fell in love with the thumbnail and the splash screen.

But, as my guidance counselor in high school ironically told me more than once, looks will only get you so far, and the interest in the appearance of Gunhouse wears off quickly. In order to get weapons for your defense, you have to participate in the time honored tradition of a tile matching game, and things very, very quickly go off the rails. For one, it’s a timed effort: fair enough, you can’t expect players to spend forever getting the perfect guns. As you match up four tiles, you create a larger tile that then can be moved to the left (standard shooting weapon) or the right (“special attack” that rains down). Both have their advantages and disadvantages, but they still only matter if you can actually get the tile to where you need. See, after you assemble the big tile, you gotta move it to the right spot, but even a single smaller tile will block your path. So you swipe around, but you can only swipe left or right to move things out of the way, and tiles will automatically fall from the ceiling. So now you’ve got this massive ice tile that’ll make the best freeze cannon, but a tiny purple box is blocking your way and now the shutter is closing and oh my God they’re gonna eat all the orphans. 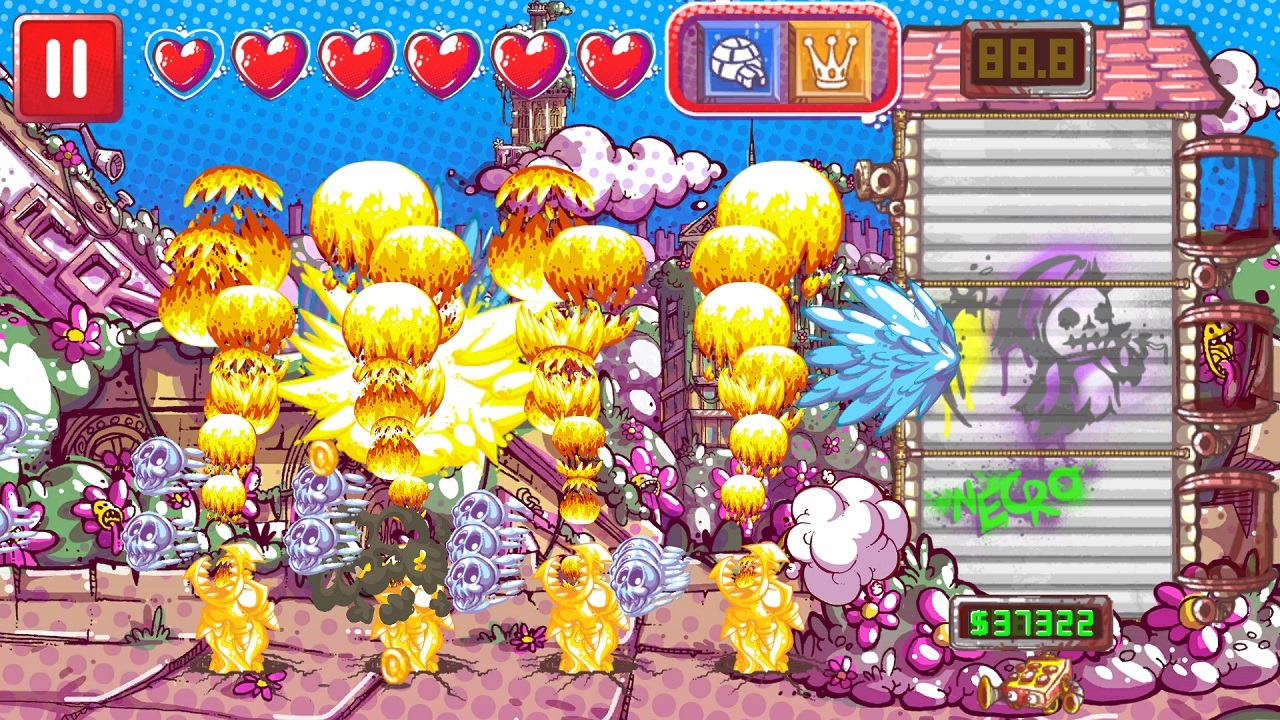 Stressful! With less than half a minute to make the exchanges, Gunhouse quickly becomes stressful, and that’s not even the half of it. The pressure of getting the big tile into place is only relevant if you can even make a larger tile, which is quite difficult with three lines of descending blocks to work with. Often, you get long streaks of one color and one color only, resulting in the best strategy to frantically move pieces as fast as possible, hoping that you will luck into getting a match. Which, let’s be honest, isn’t a strategy at all. So now we’re flinging pieces like crazy, praying we get a big weapon that can actually be implemented, and I sincerely hope you’re doing this in handheld mode, because trying to swipe around the tiles with the controls is a goddamn nightmare unto itself. Nothing wants to move quickly or accurately with the joystick/button combo, so you need to get down and dirty with your finger to make it happen. Again, not all mobile ports are created equally, and I appreciate Necrosoft wanting to make it accommodating for players who prefer docked gaming, but this simply doesn’t work.

It’s a damn shame that Gunhouse plays out the way it does. There’s a cool idea at work here, and the visual presentation is top notch, I gotta hand it to the team there. But, after the first couple of time slots, the game becomes totally unfun and unplayable. Even with a bunch of upgrades and more incoming weapons, you just end up wasting more time, getting fewer attacks in and feeling futile as you waste time with worse results. I’m not sure what can be patched or fixed here other than reworking the core of the game itself, and that feels like a dreadfully unfair task to assign the developers. This is probably for someone, and the sales on iOS/Android are decent enough, so good luck to those who enjoy it. As for me, I’ll go back to keeping my tower defense and matching games in separate stacks, thanks.