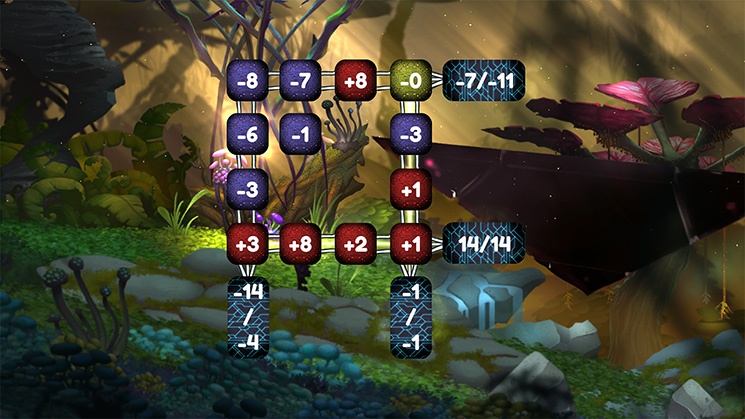 If anyone were to sit me down and ask what my favorite subject in school was, I would, without hesitation, say English, because I’d look like such a hypocritical philistine otherwise. After all, I write most hours of the day that I’m not playing video games, and I did genuinely love my time reading, discussing and writing throughout my educational journey. By the same token, if anyone asked what my least favorite subject had been, math comes immediately to mind. This is primarily because a.) I failed it and b.) I hate it. Math is an unforgiving, rigid and frigid concept that demands one answer and one answer only for every equation it presents. English has wiggle room and space for interpretation: you can bullshit your way through most English essays and answers as long as the tripe you’re serving is piping hot and oozing with conviction. But, when it comes to combining video games with math, there’s something about numbers that actually sets my mind at ease. Probably because there’s a goal that I can see (win points, save the galaxy!) instead of one that I can’t (get a passing grade in a class you hate!). As a result, I found myself developing a really great relationship with a little title called Energy Balance.

The story of Energy Balance takes place somewhere far, far in space, near absolutely nothing and absolutely no one. Your ship suddenly takes it upon itself to commit mechanical suicide and uncouples every single energy unit of your engine, drive and life support systems. The only inhabitants of the ship that we know of are a faceless alien, who serves as our primary narrator and exposition master, and his semi robotic cat, Meowie. Meowie acts as a good listener and a comic foil to the alien’s diatribes that would otherwise be sad and ominous without something to act as a sounding board. Think Garfield Minus Garfield but with the very real threat of dying in the void of space instead of the implied nihilistic lifestyle that John Arbuckle leads. Thankfully, all is not lost, and the alien takes it upon someone (itself? Meowie? you?) to fix the problem and bring the ship back up to working speed. It’s not a dismal and hopeless situation, and the process is actually pretty satisfying. 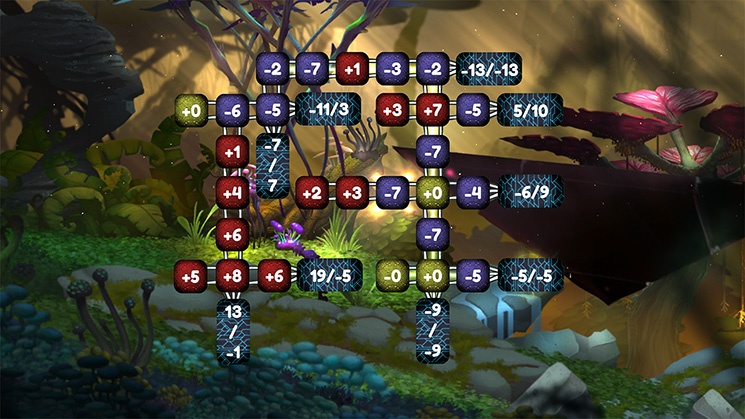 As a mathematical puzzle game, you can win at Energy Balance by arranging numerical tiles in a line to meet the expected value that pops up at the end. So, if you’re supposed to get things to exactly zero for one particular line, you need to carefully select positive and negative integers and put them in a row to appease the number gods and move onto the next puzzle. Now, as you probably could have guessed, there is never a single line to deal with: if that were the case, why are we even playing the game? Instead, you have to make sure that upwards of eight different values are all being honored and calculated at the same time, and a single tile in the wrong place can throw off everything, Oh, and, early on, you get to encounter tiles that don’t actually have a place in the puzzle, but are free floating agents that may or may not be the one you need to make everything work. While it’s a bit of a dirty trick to have fake numbers that occupy space, it also makes sure that the player isn’t simply doing fast maths with a calculator and calling it a day: there actually needs to be a bit of logical trial and error done in order to come up with the perfect situation.

Since this is basically a cracked out version of Sudoku, let’s touch upon what makes this the better mousetrap, in terms of being a simple puzzle game. First and foremost, the atmosphere is done right and comes across in a really engaging and borderline exciting way. There are different musical tracks for each level, changing between this incredibly fast and driving trance style to something music more atmospheric and ethereal, which is a massive gear change for a puzzle game where you’re basically doing long addition. For a majority of puzzle games, I tend to throw on my headphones and just enjoy 2814 in an attempt to put my brain into a zen status of focusing on stuff that doesn’t affect my real life. I didn’t have to do that with Energy Balance: a well crafted soundtrack does the channeling and focusing for you.

Secondly, the game really does make sense once you figure out the patterns and approaches that are needed for making it to the end of the level. Remember what I said about the floating agents? The second you decide and confirm which number isn’t needed, everything else feels like it falls into place without hesitation. Having columns that are only one or two numbers long and, as such, require absolute minimum variety to achieve the target is a lifesaver, and cements things for future ideas and changes. That’s the kind of certainty that I almost never find in a puzzle game, and here it is, front and center, as a main feature of Energy Balance. Even when you move into the Hardcore and Time Attack modes, there’s still this element of foundation to build upon that, once you discover your cornerstone, you can move forward and know that you’re making the right decision. 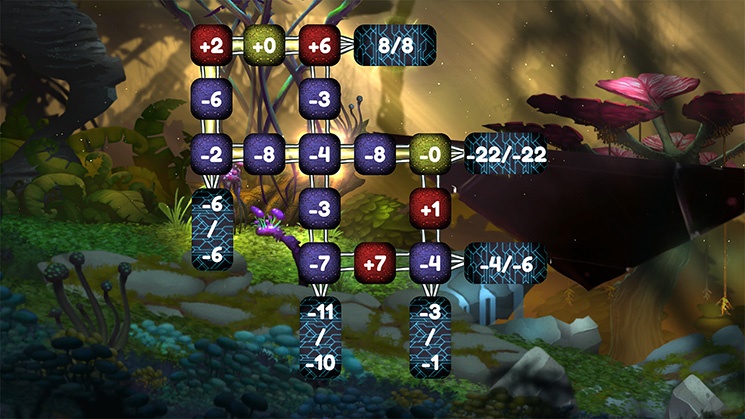 Lastly, I love that there’s actually a bloody story that I can get behind. When you do the new style Hidden Object Games, they tend to take a lot of effort to craft these beautiful and fantastic fantasy storylines that have very, very little to do with why I need to find six peacock statues and a bowling pin somewhere in my bedroom. But here? I gotta get my ship put back together, and the frigging reactor or whatever is shuffled around and just getting everything to where it originally was means I can fly home and Meowie won’t eat my alien corpse. It’s a motive that I certainly never felt when I was struggling through Physical Contact: Picture Place.By crafting the world around this illogical logic puzzle concept, by making it something that actually seems to need my attention and makes my actions relevant, Sometimes You did the impossible and created a puzzle title that felt like I really had to see it through to the end, not just fill in all the boxes so that I could tick it off the list.

The execution of Energy Balance might not be for everyone: after all, at the end of the day, it’s arranging numbers in order to make the level be complete. But there’s something so utterly compelling about the way its done – from the soundtrack to the framing devices – that keeps you moving forward and coming back for more. This cheap little feature is well worth a few hours of your time, even if it’s spread out here and there, and I encourage any puzzle enthusiast to give a go on the most unexpected space oddity that I’ve run into.