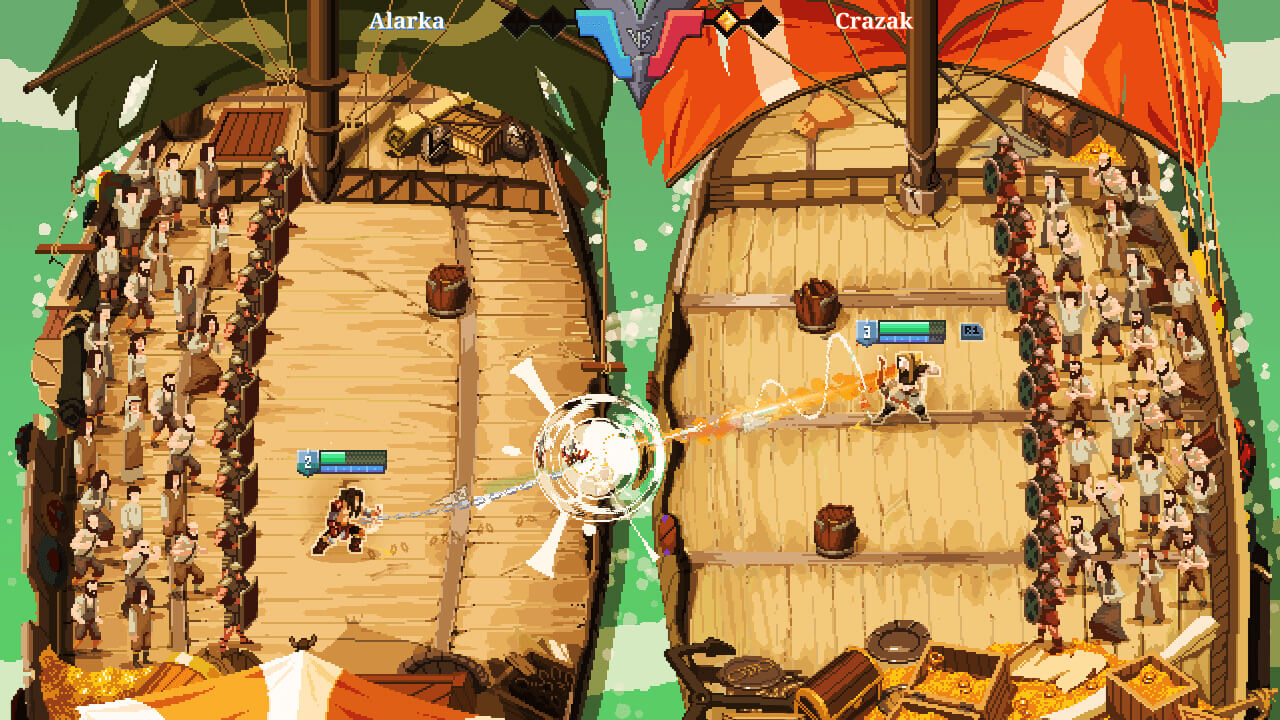 The notion of pitting notable warriors from throughout history (plus a few curveballs of the fictional variety) against each other to find the strongest isn’t a new one, see Deadliest Warrior for example. But Strikers Edge, developed by Fun Punch Games, achieves this in a more novel approach – having them take part in the ultimate game of dodgeball.

In Strikers Edge you have a choice of 8 combatants to play as ranging from the more recognisable like the Spartan and Ninja to the fictional Spellfencer. Each have a throwing attack based on what you would expect, such as the Spartan who can throw a spear. There are also special attacks but they seem slightly more out the box, in the Spartans case he throws a shield that can explode (don’t ask why, it looks cool). One of the strong points of the game is how the characters play. It doesn’t feel like they’re just different skins. Instead a mix of stats and different specials allow for each to bring a feeling of freshness, allowing characters to cater to varied playstyles. I preferred the attack speed of Urgul the Barbarian which allowed me to forget about the only other buttons, dodge and block, instead I could focus on accuracy to make use of his chain special attack and the punishing combos it allowed for.

Gameplay modes consist of what you would expect from this classic arcade style. There’s a half-baked campaign that isn’t even top of the main menu (the developer doesn’t try to hide the fact the game leans heavily on multiplayer) that sees you accessing fights on a map Street Fighter style. The campaign allows you to follow a characters story line, all of which are based around magic crystals made from God blood. Interactions between characters come at the beginning and the end of a fight and are extremely basic. You get a little medal to show who you’ve completed the story with and what difficulty you played on (either easy, normal or hard) but other than that there didn’t seem like much of a point. 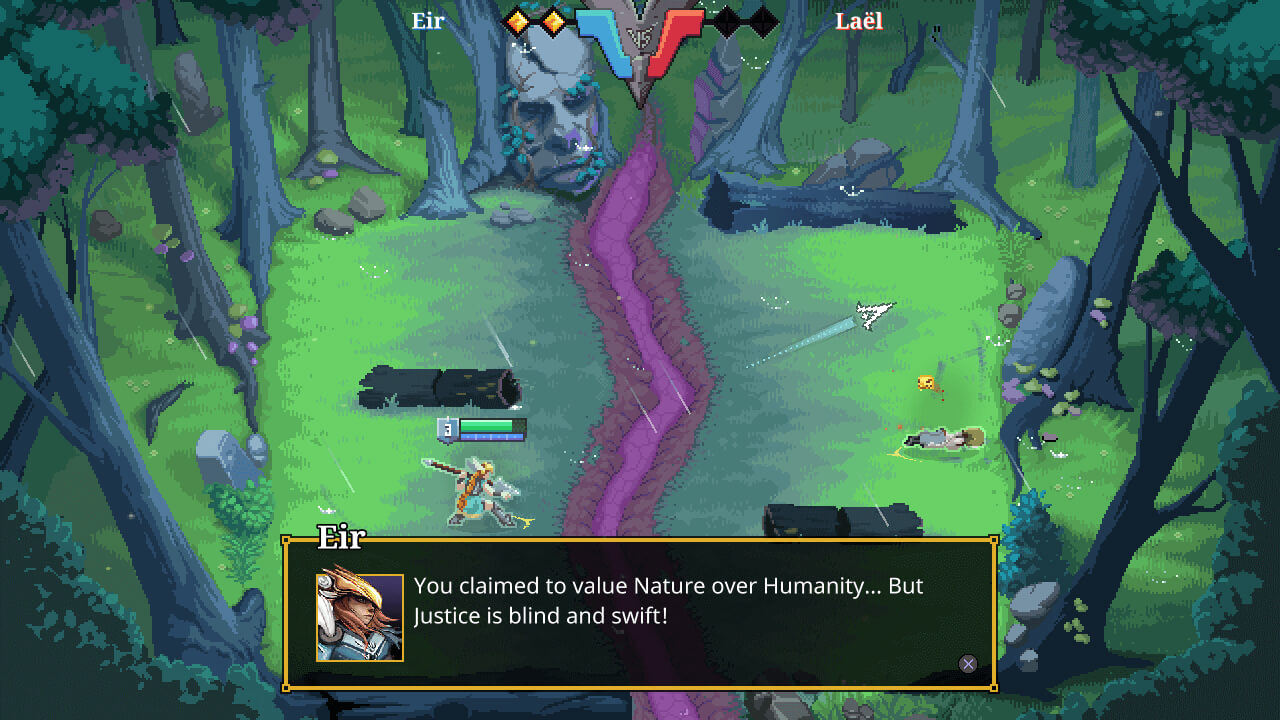 Being a predominantly multiplayer focused game, a boring campaign mode can be forgiven, so how does the game compete with the best and match-up online? Well it doesn’t, literally. Playing on a Monday evening GMT time my experience started off positively. Within a minute I had found a 1v1 quick match. It felt much better than playing the computer. The randomness a real person can add made me have to think on my feet. The block and dodge buttons I had neglected during campaign mode felt necessary. I won both rounds and felt ready for my next, especially if going for the trophy requiring a couple hundred online games under your belt. Just over a minute later my next death match began, but I quickly noticed something. It was the same player. After winning consecutive rounds again I was worried when I started search for another 1v1. 8 minutes later and nobody to be found I optimistically thought maybe the 2v2 is where all the action was, another 6 minutes and I realised the extent of the lack of players. Just less than two weeks after release and nobody was in sight, it felt like such a real shame.

Chaotic combat is both a blessing and a curse, in this instance it allows for some really fun 2v2 matches and suits a party atmosphere. When you have a chance of delivering a killing blow the game will do slow-mo similar to Peggle. I found it was often too liberal and was wrong more than it was right. In one instance the computer surprisingly walked right into my attack, it was so random that the game couldn’t keep up and didn’t even manage to do the whole slo-mo thing at all.

Maps are very samey and are just variants of two sides with something in the middle stopping you from crossing into the other half. The later maps throw in dangers such as poison shooting out of a river or icicles falling from above but they mostly just felt cheap as opposed to intuitive. In one instance, which just happened to be the final fight of one of the campaigns, I got stuck between a falling obstacle and the wall allowing the computer to kill me before I could even try to move. 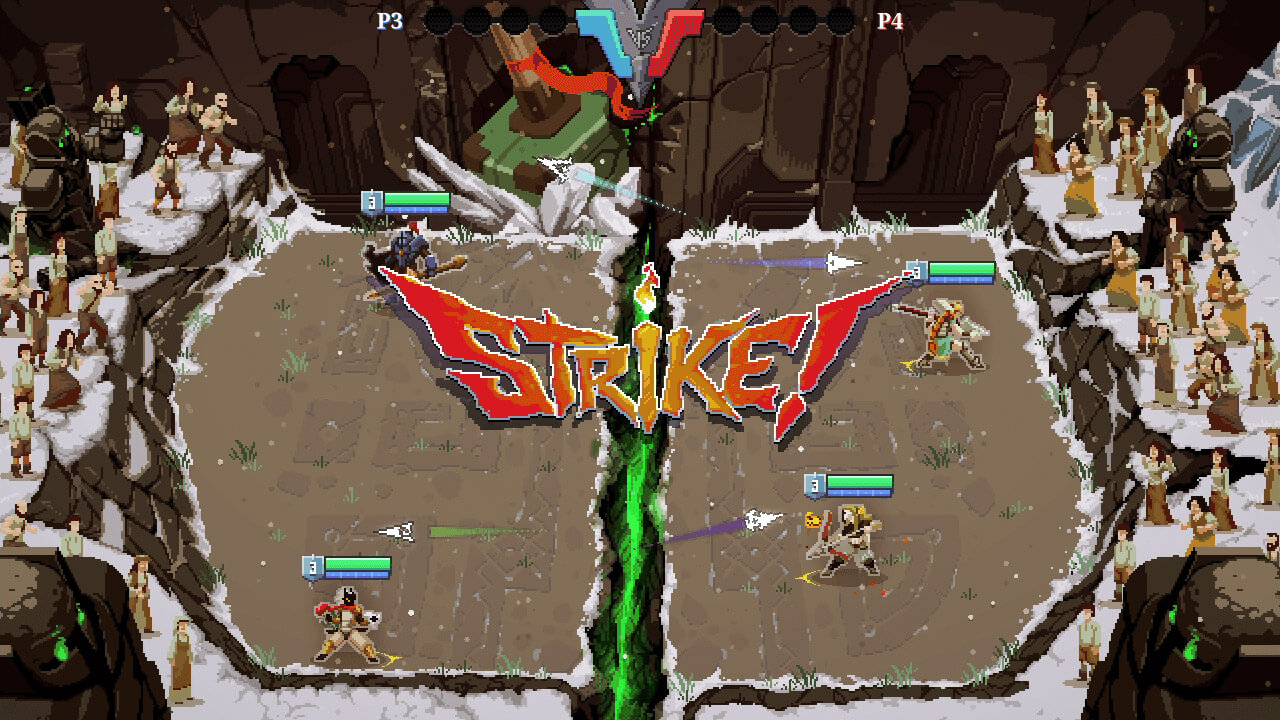 There is a tutorial mode that just teaches you the basics, but this was my main gripe with the game, there didn’t seem to be much beyond basic that you needed to learn. Maybe when playing against real people you get a sense of a deeper level of gameplay mechanics but with a non-existent online community this became impossible for me to test. Similarly nobody I knew showed any interest of playing the game online and if you put in the effort to play locally with somebody there’s so many other games out there I could see many getting tired of this quickly.

Graphics are one of the highlights being very colourful and vibrant. There was the odd graphical glitch, with the loading screen regularly being plagued by green pixels. FPS was also touch and go which was unfortunate since gameplay is meant to be chaos but this would tank the performance. Music was also a strong point with more upbeat action tracks adding to the overall feel of the game.

I was surprised to see there is a platinum trophy for this game, but as of this review 0% had achieved this, mainly down to the fact there are a lot of online trophies and nobody to play against.

Multiplayer games can provide endless entertainment. However in the case of Strikers Edge, basic gameplay and dead servers plague what could have been an enjoyable experience. Instead buy this game if you regularly have guests round and you’re looking for a fun 4 player game that you can delve into for an hour or two. Otherwise like the (mostly) historical settings, this game is better left in the past.