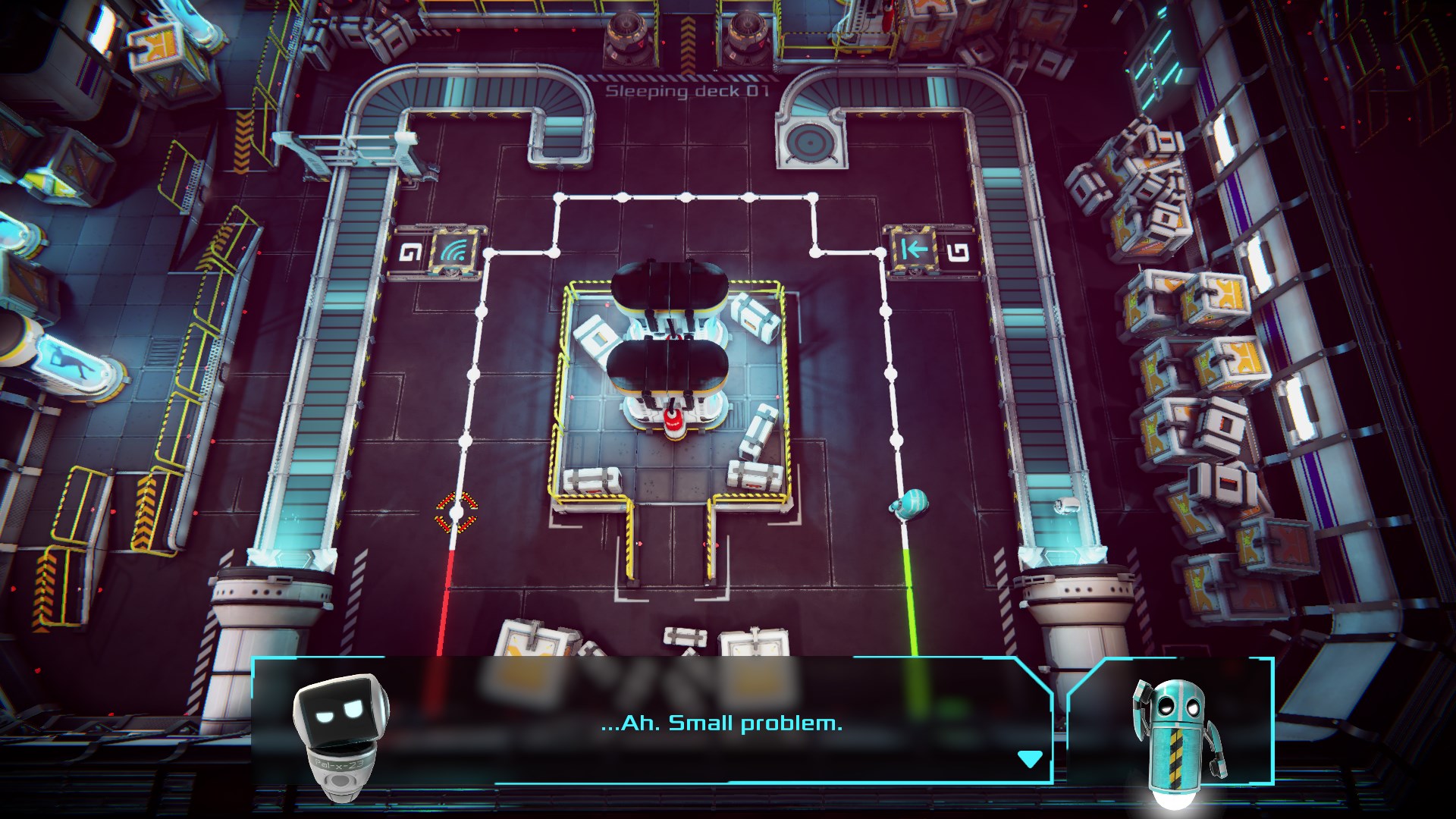 When I first heard that Fishing Actus, the developer behind the critically acclaimed Epistory – Typing Chronicles, was going to release a new game, I immediately got excited, but, just as quickly, I also got rather skeptical when I found out that it was going to be a puzzle game.

The entire game takes place inside the Europa, a human colonization vessel where you’ve just arrived, with the task of maintaining it during its voyage to the promised land. Unfortunately, as it tends to happen quite a lot in video games, something goes terribly wrong and you find yourself going through the entire ship in order to avoid a catastrophic disaster.

The player takes on the role of an Algo bot, a service droid which is devoid of any speech, so you have to rely entirely on the help of droid named PAL, to get through over more than 40 unique levels. The game is divided into 6 different chapters, with each referring to a specific part of the ship, and, in consequence, each of these parts is composed of several levels. Each level presents you with a unique puzzle, but different puzzles might share some similarities in terms of how you need to approach them from a puzzle-solving perspective. 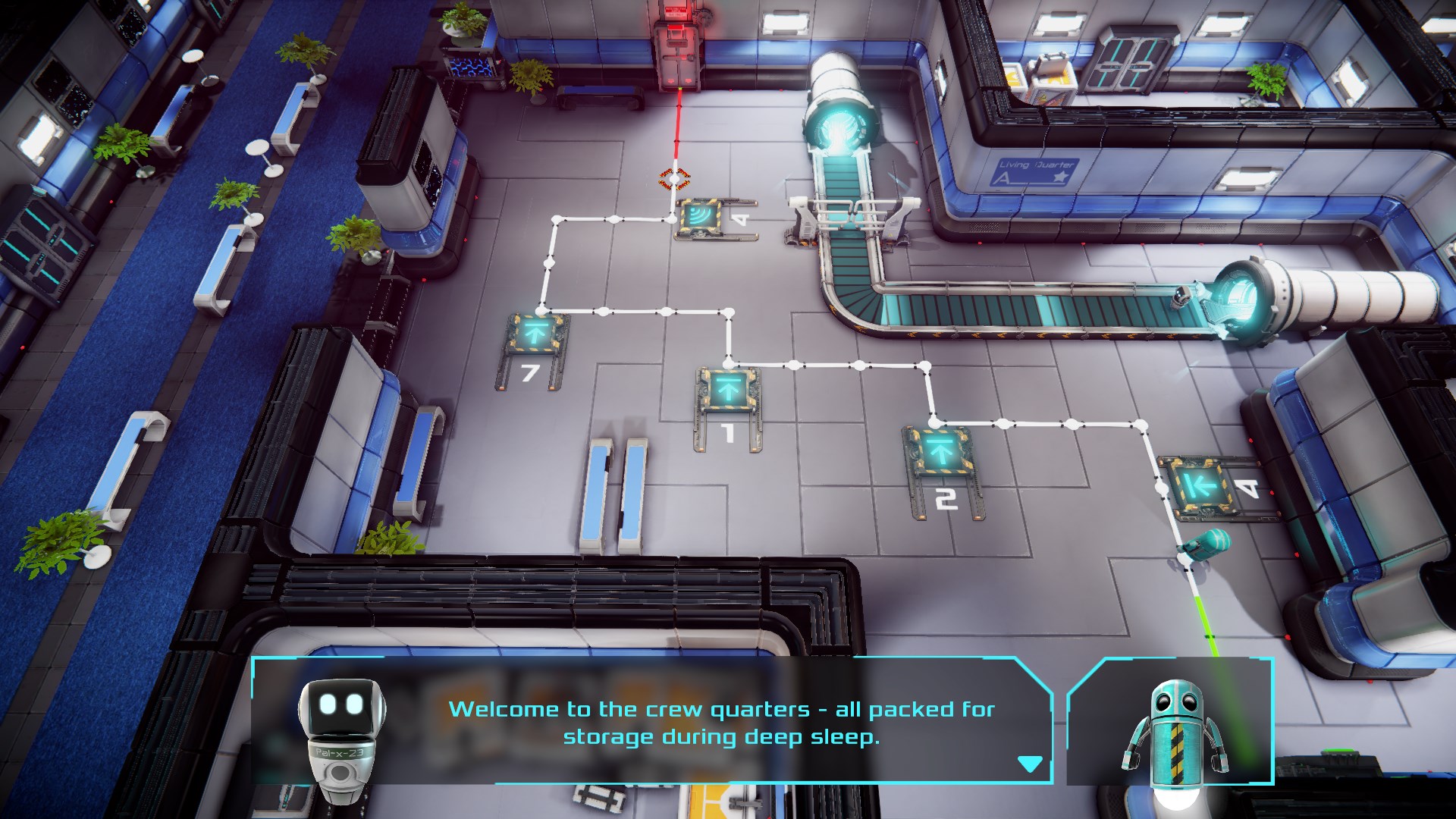 As a game, Algo Bot is rather interesting, because it could be described as a programming game in disguise. The reason for this is that you’re essentially programming Algo to follow a set of instructions on each level, as you can only move him through pre-established pathways on the floor. This is done by simply clicking and dragging on one of the various commands at your disposal, and then dragging it to the instructions queue.

The game starts off rather slow, with the only commands available to you being, going forward, turn left, turn right, and performing a U-turn. As you progress through the game, you’ll slowly be introduced to new commands, and you’ll also be given the ability to combine these with each other. The first one that you unlock, is the ability to save Algo’s onboard memory by using functions, which allows you to chain a series of commands so that it only takes up one space in the command queue. When I first came across this mechanic, I realized that the game wasn’t going to be as simple as it initially seemed, and next thing I know, I unlock a second function slot, and now I can even put a function inside another function! 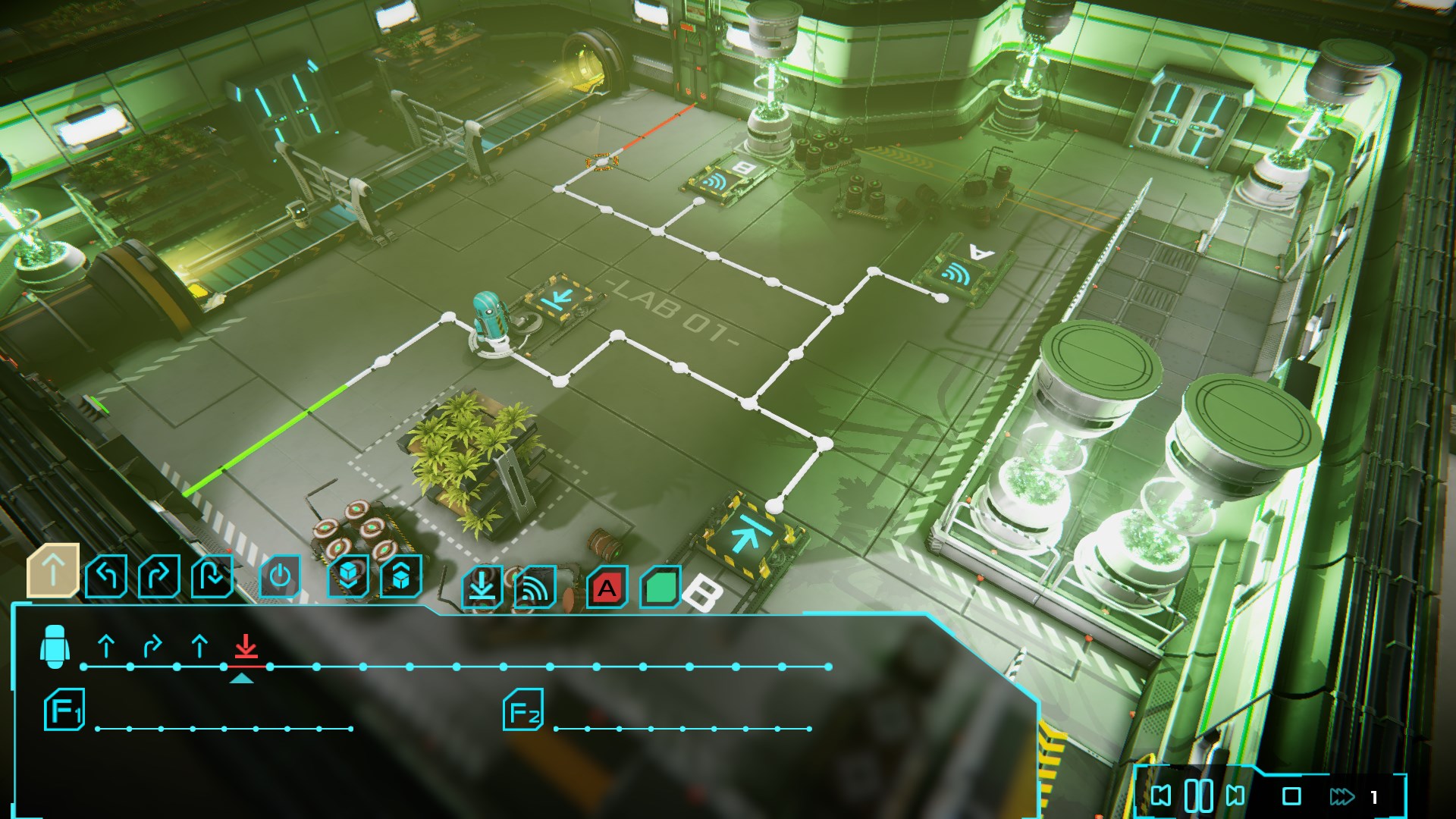 Later down the road, you’re also introduced to variables, which will require you to download it from a terminal and, usually, upload it to another. Then you also have to activate buttons, carry PAL around from one conveyor belt to another, because for some reason he can’t move on his own. Last but by no means least, on the last few levels, the game will unveil conditions to you, which upon triggering will execute a specific command depending on the variables that you’re carrying, almost like an “as if” statement, in order to perform certain actions.

As someone who is more into action-oriented games, and usually tends to avoid puzzle games, I can safely say that this is one of the most accessible puzzle games that I have ever played, and it’s fairly enjoyable thanks to some light-hearted humor and elegant visuals. With that said, if you’re a hardcore puzzle solver, the chances of you finding something that will really challenge you here, or provide you with any sorts of replay value, are pretty much non-existent. However, if you’re looking for a nice little puzzle game to entertain you for about 5 hours, this is certainly one that you should keep your eye on.