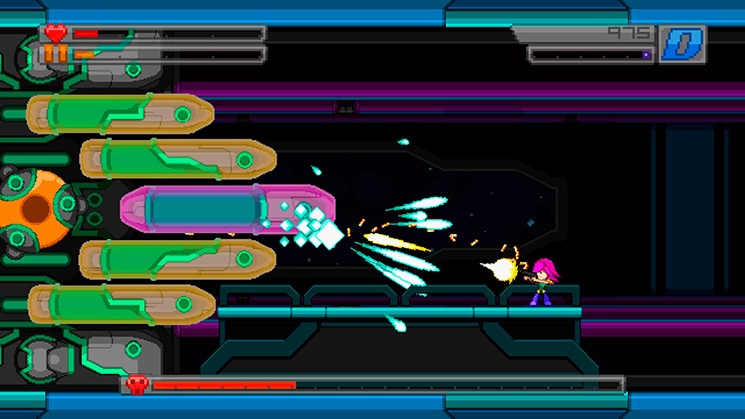 There’s something to be said for games that are unapologetic and relentless in their pursuit for a singular goal. For anyone who ever played Bleed, the side-scrolling arcade shooter with a touch of surreal and satirical storyline, you know that Bootdisk Revolution loved two things dearly: action and fluidity. The idea of being able to burn through the game faster and faster with each run was something enticing, and the heroine, Wryn, was utterly likable for her blunt, no frills approach to the game (kill every existing hero to become the greatest hero, brilliant!). But there were a couple of hiccups, especially when I played the Switch port some months back. The difficulty was insane (in my opinion) and there were too many spots where the speed and hectic nature suddenly stopped due to level design. I’d like to think Bootdisk Revolution heard my laments, but the truth is Bleed 2 was made long before the Switch port arrived. Well, whatever, Bleed 2 is here on the Switch and it’s everything great about the first with some severe improvements to make this a goddamn good time.

Bleed 2 picks up sometime after the events of the first game have concluded, and Wryn is now the greatest hero alive, but she prefers to just be chill about it. All of the sudden, the greatest villain of all time decides to take Wryn out by exploding her apartment, and Wryn isn’t just going to let that happen. Grabbing her trusty katana and pistol, Wryn heads out the door to go find this pain-in-the-ass villain, and ends up getting assistance from the unnamed blond guy from the first game who was also a pain in the ass there, too. Whatever, Wryn isn’t gonna ask questions: she’s just here to stop the bad guys. 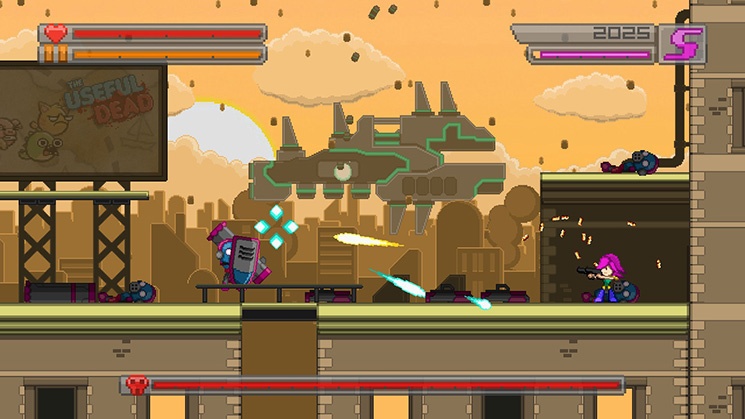 If you liked the pixel artwork of the original, Bleed 2 delivers an even more beautiful, polished look which I can only describe as “cleaned up.” While there was a certain rustic and enjoyable tone to the first Bleed, this second one has taken time and effort to make everything still familiar and great, but now there’s just a serious polish on it to take it to the next level. In getting more information for the game, I took a look at the dev blog in the weeks leading up to the release of Bleed 2, and I’m impressed with the number of tweaks that were implemented to make everything look better in terms of animation, performance and just general “indie delight.”

One thing that always sticks out to me is how the controls of Bleed 2 work, and being impressed that they do work as well as they do. Right shoulder to jump, left to slow down time, and the right stick to shoot or swing your katana. The first time you pick it up, everything feels weird. Everything. You can’t fathom why A, father of all jump buttons, is how you taunt, but there you go. After a bit, though, you slip into a groove and it all just makes sense. It feels natural and more responsive to the way that Wryn runs and guns, and it attunes better to the way that you’ll be shooting endless bullets and then suddenly stop to slow down time and swing your katana to deflect bullets (which is always awesome, and the only way to stop some bosses). I don’t often praise games for reinventing the wheel, but this just feels right, and I think it could only work for Bleed 2.

Bleed 2 also just flows so much better than the original. While the first Bleed almost emulated the Mega Man style of picking and choosing bosses to fight in your quest to be the best, Bleed 2 drops you into the action of your home being destroyed and sets you free. You have a singular objective: defeat the boss who’s attacking you. It takes a while to get there, and the number of mini and regular sized bosses you fight along the way is staggering. Starting from just one random grunt with a bigger cannon, you quickly end up with two, three, even four bosses in a row to fight in a singular room, dodging and dealing damage as best you can. Nothing ever feels unclear or strange about the way you need to fight and defeat them. Wryn shows you everything she can do in the first couple of rooms, and then it’s up to you to decide how to use it so that you can actually get somewhere in life. 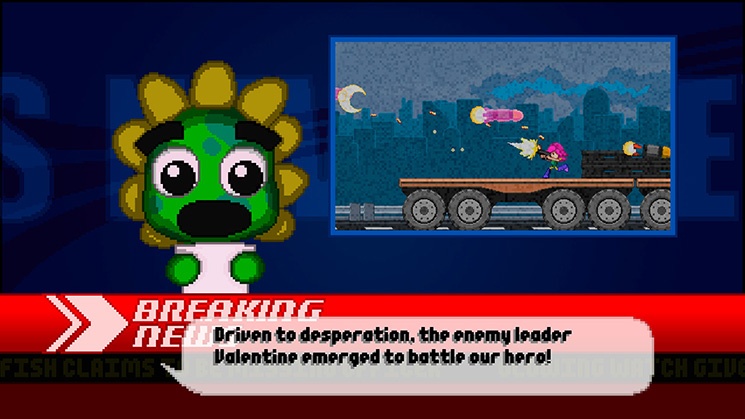 The difficulty, mercifully, has been balanced in a big way. Previously, I commented how even the easiest mode of Bleed was tough as nails, and that can be imposing to newcomers who aren’t ready for over-your-head levels of water. Easy mode here in Bleed 2 is legitimately easy, and the restart points are more frequent and logical. If you put it on easy, you don’t even need to slow down time most of the game, but doing so will enable you to basically have the highest score possible. That’s not to say the game is easy: simply change-up to normal to see what the game is more like, and go higher if you want a serious challenge. Because, believe it or not, beating Bleed 2 the first time through is just the beginning of the game.

There’s so much here after you unwrap the first finish. Instead of changing weapons every level based on what you can buy with points, beating the game unlocks Freestyle, where you can just pick the four weapons you want to bring with you, from the classic pistol to the rocket launcher, laser rifle and more. You have the option to use Claw Girl, the heroine of They Bleed Pixels, for a really and truly crazy melee-esque run of the game. There’s an endless mode, a boss fight challenge mode, and the use of mutators to alter how the game performs. Wanna see those hit boxes, or have unlimited health? Go nuts, they’re just for you! Many will bemoan the fact that the main story is so short, but I argue that half the fun is understanding how the game plays, and then getting better and better at it.

Bleed 2 isn’t the sprawling, epic shooting quest of BioShock or even the more explorative Greedy Guns. This is a straight forward, no question arcade shooter, and it’s goddamn fun from the word go. No matter what, it keeps a straight face and keeps delivering more and more ridiculous situations that Wryn can happily shoot, slice and taunt her way through. It’s got replay value out the ass and honestly makes me feel like a better gamer for doing well at a higher difficulty range. And the honesty and sincerity of this amazing game just makes it all the better. Grab your sword and your gun, it’s party time.